George Herriman is famous today for KRAZY KAT, but he produced several other series over the course of his career that are far less well known, including the subject of today’s entry, STUMBLE INN.

The setting is a small town hotel run by Uriah Stumble, and his family and cronies, including his wife, Ida; Mr. Owl-Eye, the house detective; Sodapop, the house porter; and Joe Beamish, who did nothing but sleep in a chair in the lobby.

The strip was 90 years old this past October 30th. It debuted as an unusual two-tiered daily strip. There is  a reason why this format is hardly ever seen. It takes up too much space that could go toward another strip or advertising.  This proved to be a bad idea, with potential client newspapers taking no interest in STUMBLE INN. It checked out from syndication only six months later on 12 May 1923.

The Sunday had a longer stay, but it too was ignored by most newspapers, even within the Hearst chain. Its’ vital dates were from 9 December 1922 to 9 January 1926. 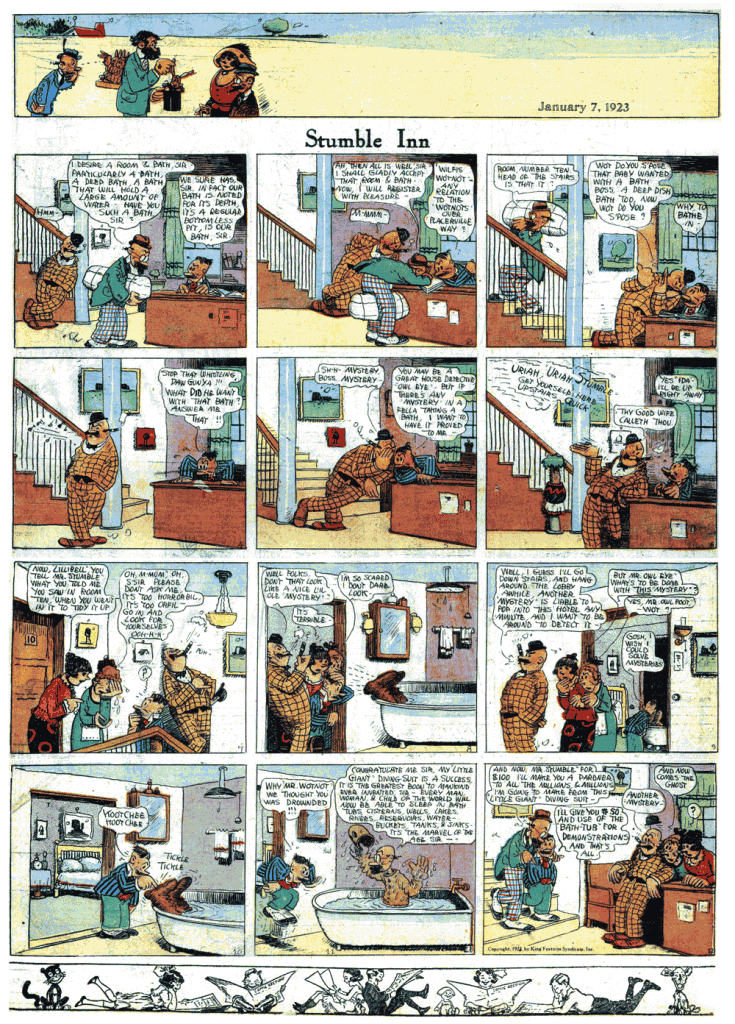 Originally the STUMBLE INN page was often seen in several of the Hearst chain newspapers’ Saturday evening comic sections, which often contained new strips that wouldn’t fit in the regular Sunday section of the morning newspaper in that city. The blank space in the top picture would usually be filled with the newspaper’s name, especially if it were on the cover or back cover of the section. 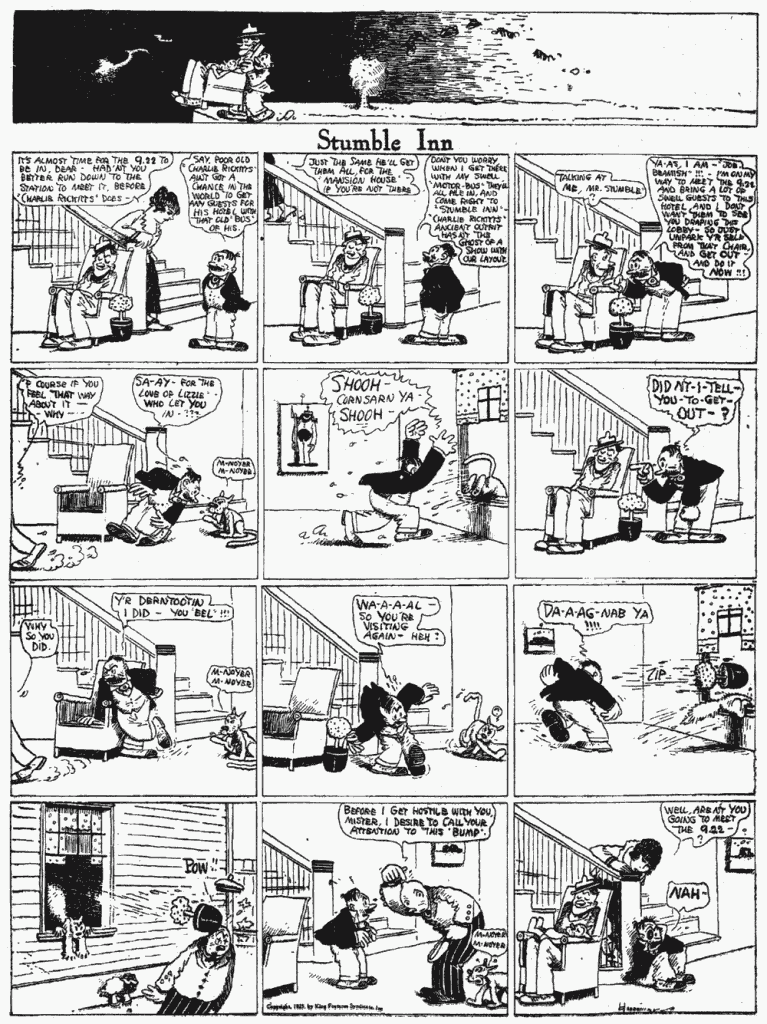 When cats show up in any of Herriman’s human strips, they always cause some aggravation. Oddly, the cat doesn’t purr, meow or hiss like most cartoon felines, but instead lets out a ”M-Noyer.” (24 February 1923) 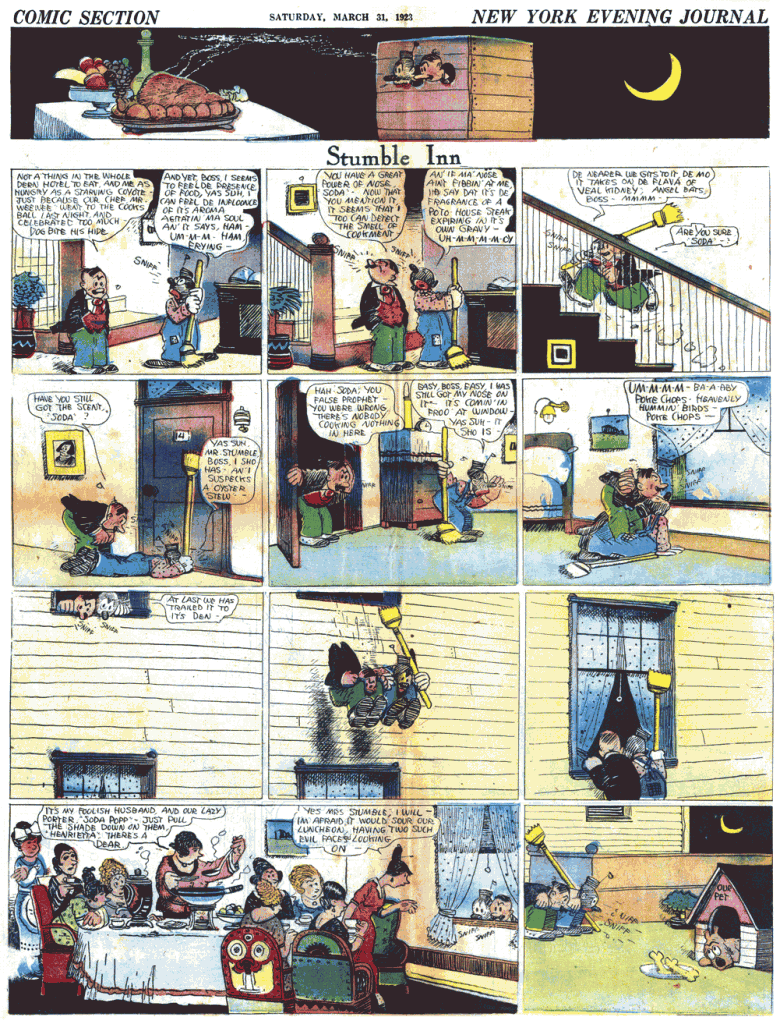 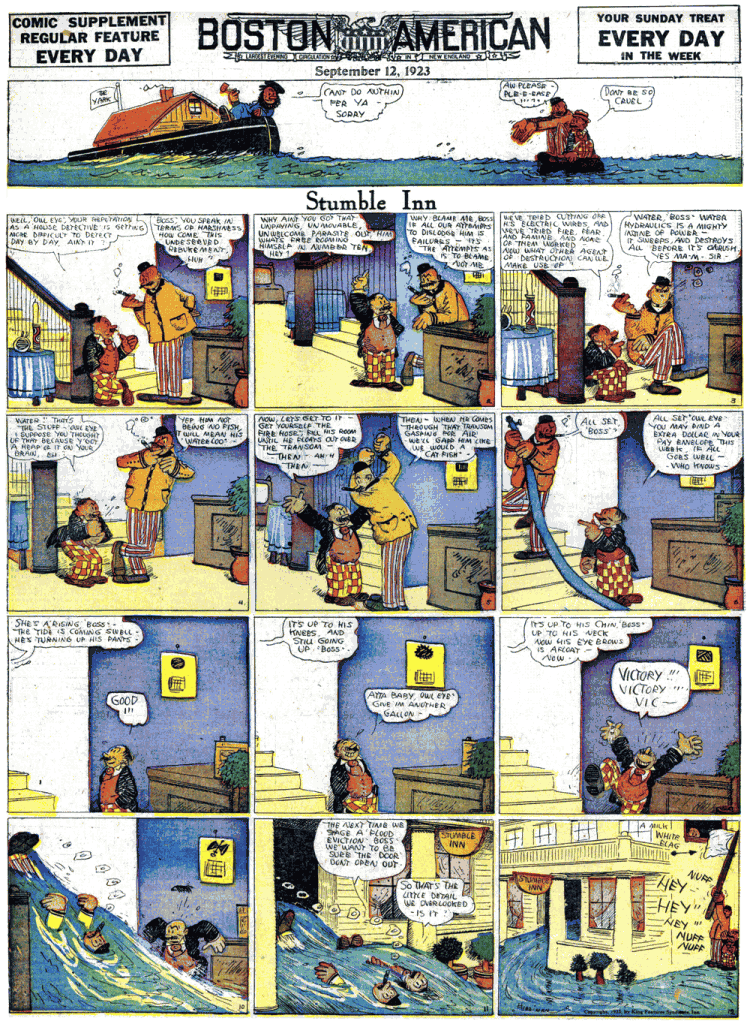 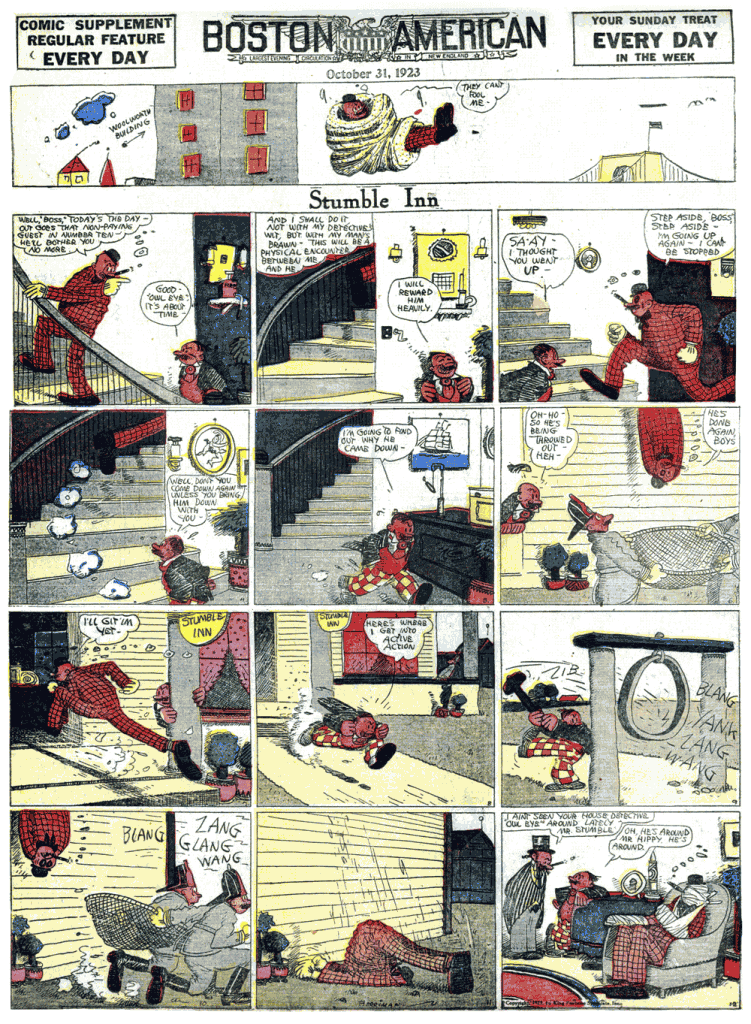 These two you may notice — if you just happen to have a 1923 calendar at hand — are printed on Wednesdays. That year, some newspapers tried a circulation stunt where they had published two Sundays wrapped around their daily strip pages every day.  Probably the only time STUMBLE INN appeared in Boston was the duration of this special section.

I wish there was an organized group of PRINCE VALIANT collectors. As far as PRINCE VALIANT, I just looked at what clubs it might generate on the Web, and there’s virtually nothing. There’s a “Prinz Eisenhertz” page, which focuses a lot on reprint publishing, and there’s a “Prince Valiant Fan Club” website, which has only several random posts since 2009. I can only suggest that one would do as I did when I was actively collecting: trade with friends and find new contacts and dealers. There will probably be some PRINCE VALIANT tearsheets on Ebay at any given time.