An important Diamond Anniversary has taken place in the field of comic books: THE PHANTOM has been in print for 75 years!

Few cartoon stars or comic strips can boast such a long time continuously in print, but perhaps surprisingly, the Ghost Who Walks made his book debut, not in America, but in Italy.

The first PHANTOM comic book was issued by the vaunted publisher Editions Nerbini in Florence. Nerbini had been publishing “L’Avventuroso,” a comic book that reprinted mainly King Features adventure continuities since 1934. In 1937, after a year’s backlog of PHANTOM strips had built up, “L’UOMO MASCHERATO” (“THE MASKED MAN”) premiered, and a series of several years duration followed.

There wouldn’t be a PHANTOM Sunday until 1939, so the Italians had no color guides. They chose to make his costume bright red, which one might think would not be an advisable shade for hiding in the jungle or lurking in shadows! 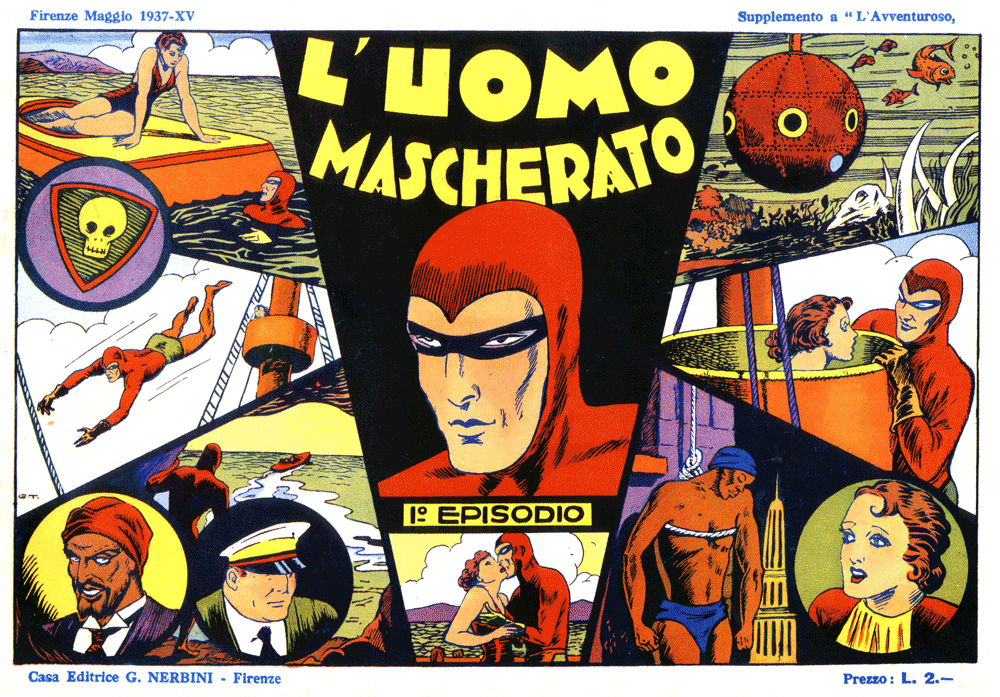 The cover artwork for their first issue shows scenes in the first THE PHANTOM story in 1936,
which is covered inside. It also shows the artist didn’t strictly follow the strips
and gave Phantom visible eyes peeking through his mascherato.
He also looks like an alien.

The second publication date was in 1938, when the magazine The Australian Women’s Mirror (which had been publishing THE PHANTOM as a weekly feature for two years), put out a special collection of THE PHANTOM. It sold mildly well, just enough to muster a further three issues from 1939-40.

A more significant first Australian edition came in September of 1948, when the good people at Frew started a new series, one that continues today. It is the longest print run of any PHANTOM publication. The current issue (to be released this week) is number 1644.

Lee Falk’s other creation, MANDRAKE THE MAGICIAN, was apparently better known
to Aussies in 1948, so his name is introduced with that reminder.
The story inside is from The Slave Traders.(1939)

The first American collection was Feature Book #20 by David McKay of Philadelphia in 1939. By then Phantom’s choice of color was gray-purple, though for many years he would still show up red in foreign editions. There were only a few entries in the “Feature Book” series starring the jungle hero, and he was relegated to supporting player in other U.S. comic books for more than a decade afterward. 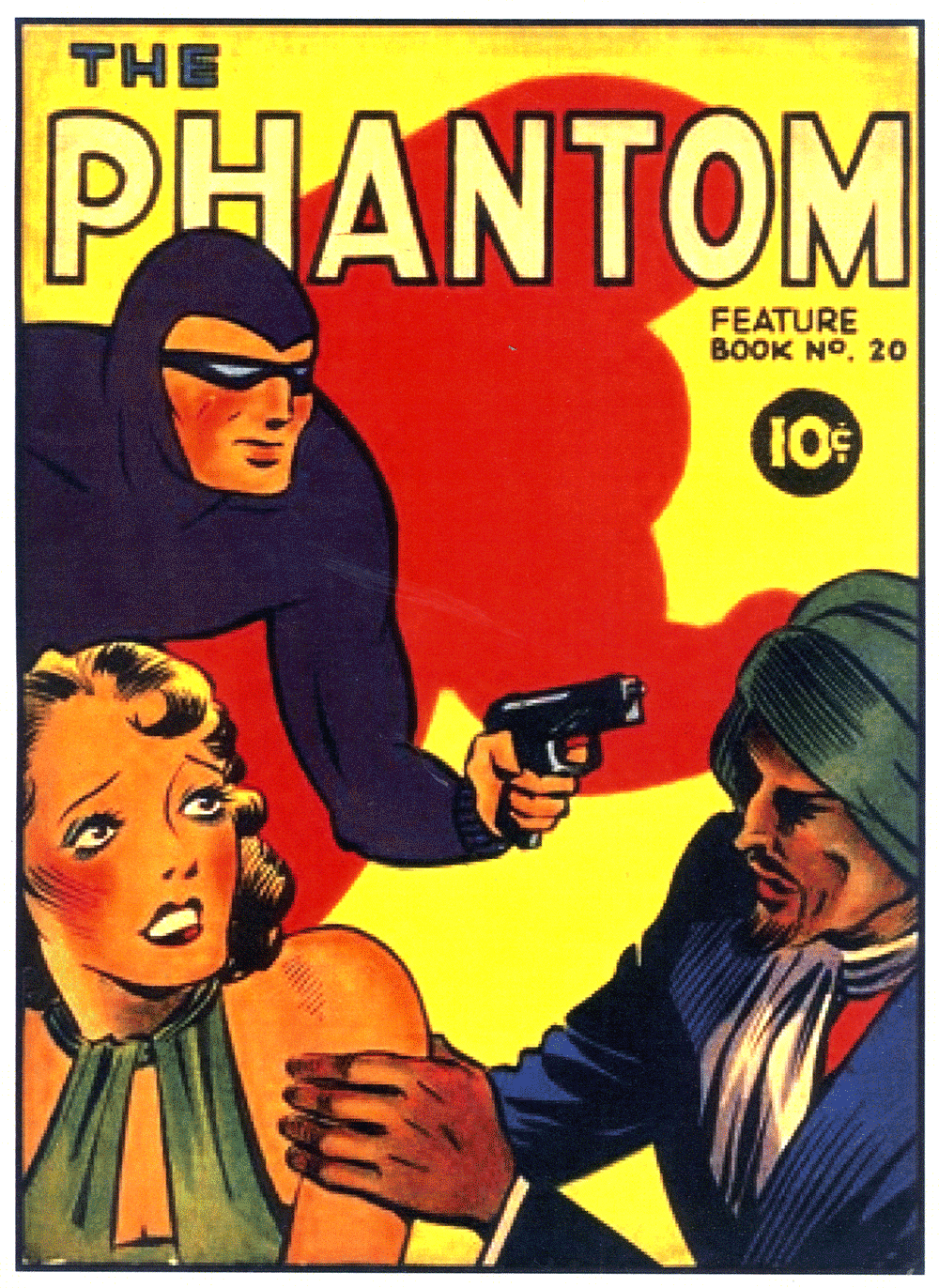 In the early days of comic books, many had no advertising, like the “Feature Books.”
These had thin cardboard covers and rough pulp-paper pages, making them
very cheap to make but very delicate today.

Another important title came in 1950 when FANTOMEN premiered in Sweden, published by the giant Bonnier AB Corporation’s magazine division at the time,  Serieförlaget (which later became Semic Press in 1964). This title is still in print, now published by Egmont, has reached an impressive 1524 issues at this writing.

The Ghost Who Walks, (Swedish version), shares his book with other comics, like United Features’ NANCY (“Lisa och Sluggo”) and Curley Kayoe (“Knockoutcharlie”). HOPALONG CASSIDY was a huge international smash hit in the 1950’s, and often Hoppy takes over the Fantomen covers. Why couldn’t The Phantom go it alone? In those days, a rule from their post office would allow only 12 pages of a given subject in any publication…I’m sure they had a really sensible reason.

In Great Britain, the fortunes of THE PHANTOM have been checkered. The publisher L. Miller (“Jolly Miller”) of London put out a very short-run series comic book called KING COMIC in 1954, which were composed of, naturally,  King Features comics, including THE PHANTOM, all Sunday strips at one title each. In essence, a Puck section in comic book size. It flopped after only four months. Miller again made an attempt to bring Mr. Walker to the English public with a PHANTOM comic book in 1959. Public response was pretty tepid, and only 18 issues ran, sputtering out in 1962, after apparently ceasing for a long time in 1961-2.

One of the reasons the feature made a weak showing was probably due to Miller never having exclusive rights, his Phantom was competing with the American comic books, sold freely in the U.K., which were more attractive to the Brit kids. After all, there was color on every page.

THE PHANTOM has had many more editions around the world,  important and not so much as well. Here’s a really obscure one, so far not even in the fan site databases, the first edition from Venezuela. It was printed in the early 1960s by Pasa, and it is a Spanish translation of the first Gold Key edition of 1962. 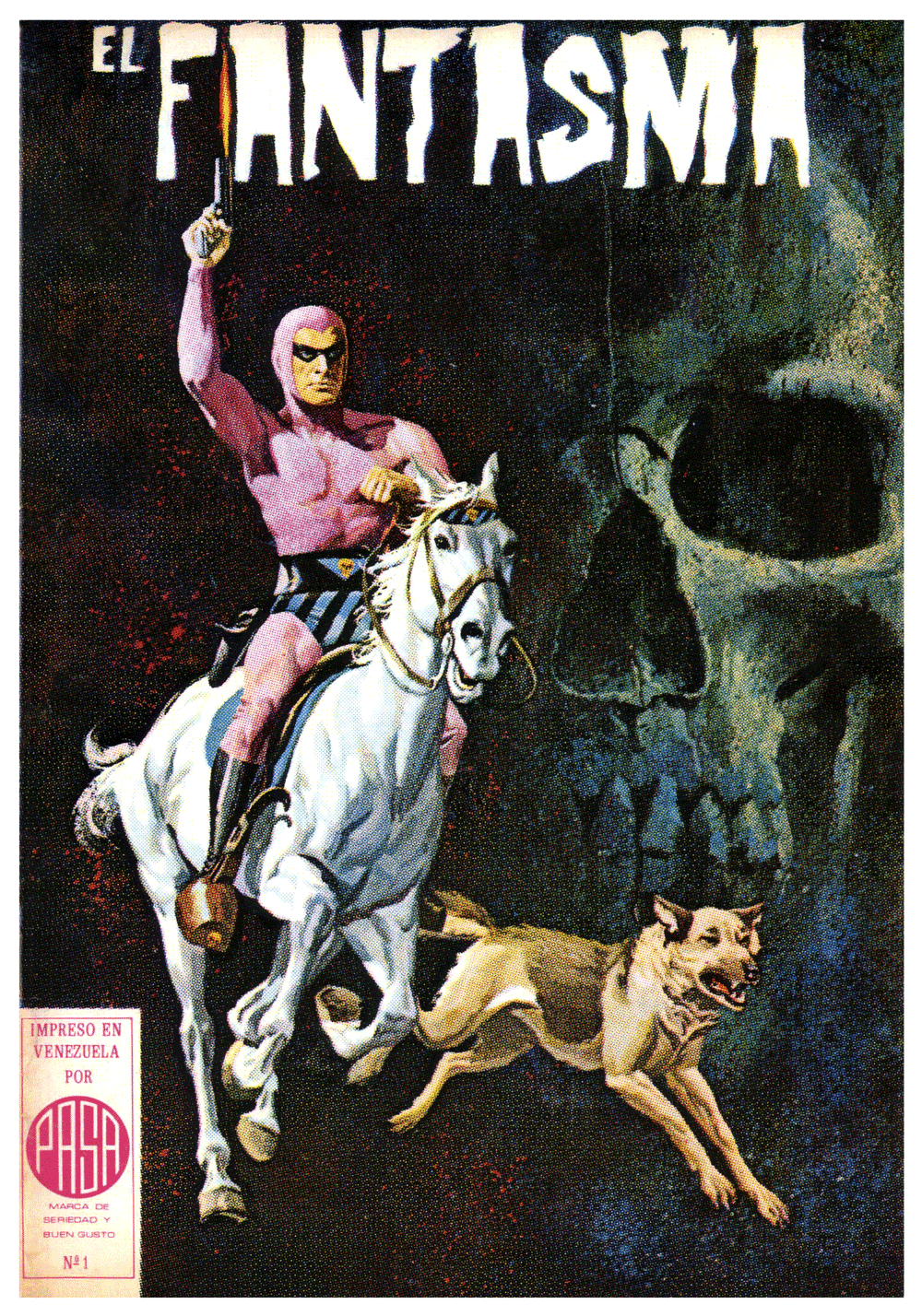 Unlike the American original, this is pretty muddy and smeary overall,
though they did at least try to publish in color.

Now for some reader comments:

I agree, Jerry Dumas could do nice things. Too bad the ever-shrinking comics prohibit too much detail. It’s a moot point with SAM & SILO though, because the Sunday was folded up with the release of 21 May 1995.

It would seem that something like a Roy Rogers property becoming public domain is pretty unlikely. In any case, we didn’t save any of his strips. If we didn’t own a title, we wouldn’t need to keep a file.