Ask the Archivist: A Look at AGATHA CRUMM

How about a comic strip about a power-mad head of an international mega-corporation who regularly creates dubious products that gyp the public, lies to stockholders, bullies underpaid employees and constantly expresses an unabashed love of greed?

I refer to the 1977-1996 King Features-syndicated strip, AGATHA CRUMM.

AGATHA CRUMM was the creation of Bill Hoest (1926-1988), one of the most prolific cartoonists of his day. He also did WHAT A GUY! and THE LOCKHORNS for King Features Syndicate at the same time, in addition to his other work outside our syndicate. The man was a comics-making machine! 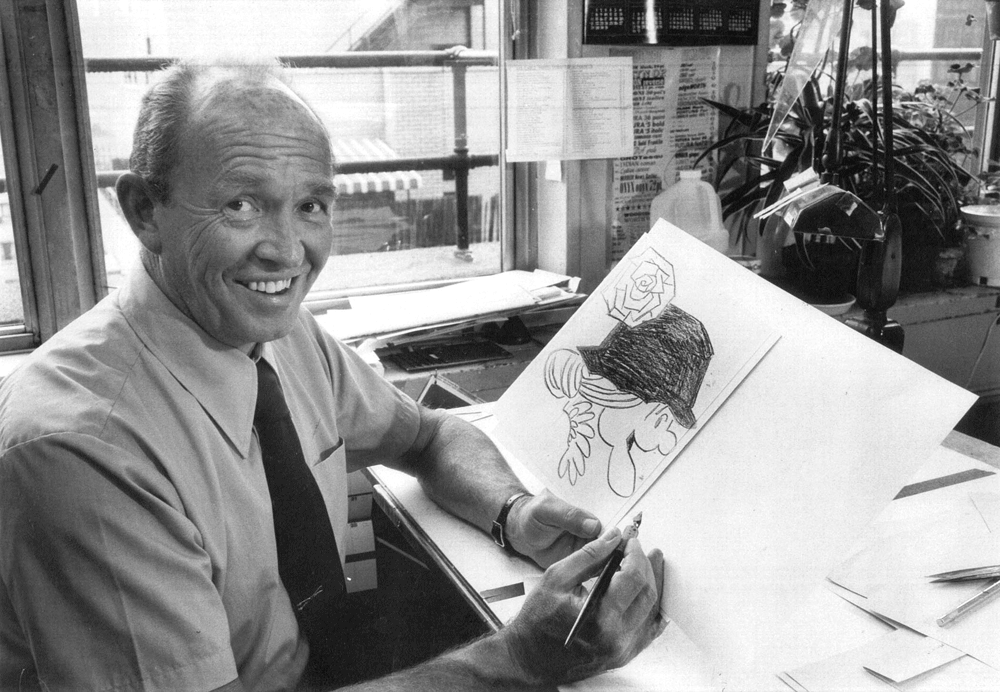 Bill Hoest at King Features during a visit in 1977. Here, he shows his cartooning dexterity by drawing a crayon portrait of AGATHA CRUMM using an India Ink pen. 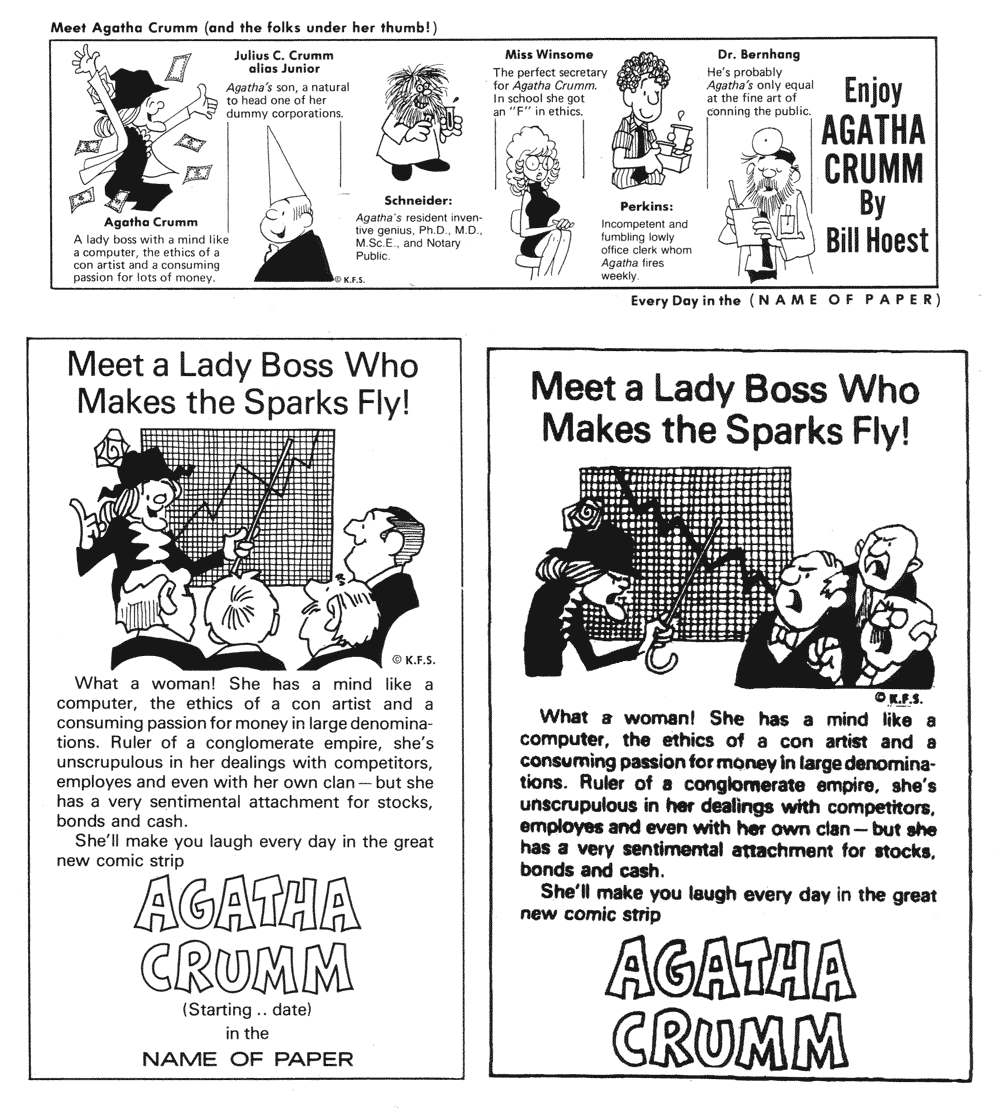 Introduction strip and promos from 1977.  The panels at the bottom are KFS publicity spots we offered to newspapers that were buying the new strip. However, here is a curiosity: the one on the left has art that doesn’t really reflect the premise of she “makes the sparks fly,” in that all seems quite happy and even the graph is looking up. Apparently it was dumped, and a second, more rancorous version is the one that was actually used by papers. (e.g. Finger Lakes Times, (Geneva, N.Y.) October 24, 1977)

Agatha was the complete caricature of a venal plutocrat, and the other cast members are more or less cynically drawn too. Her employees are mostly incompetent, and apparently well deserving of their ill treatment by Agatha.  We stay in the halls of corporate power, the boardroom, the secretarial pool and the executive offices. Sometimes, readers saw her son, Junior, and his wife and daughter, Bunny. Aggie imparts important life lessons to her granddaughter, such as her version of the Golden Rule: “Gold goes up as the dollar goes down.” 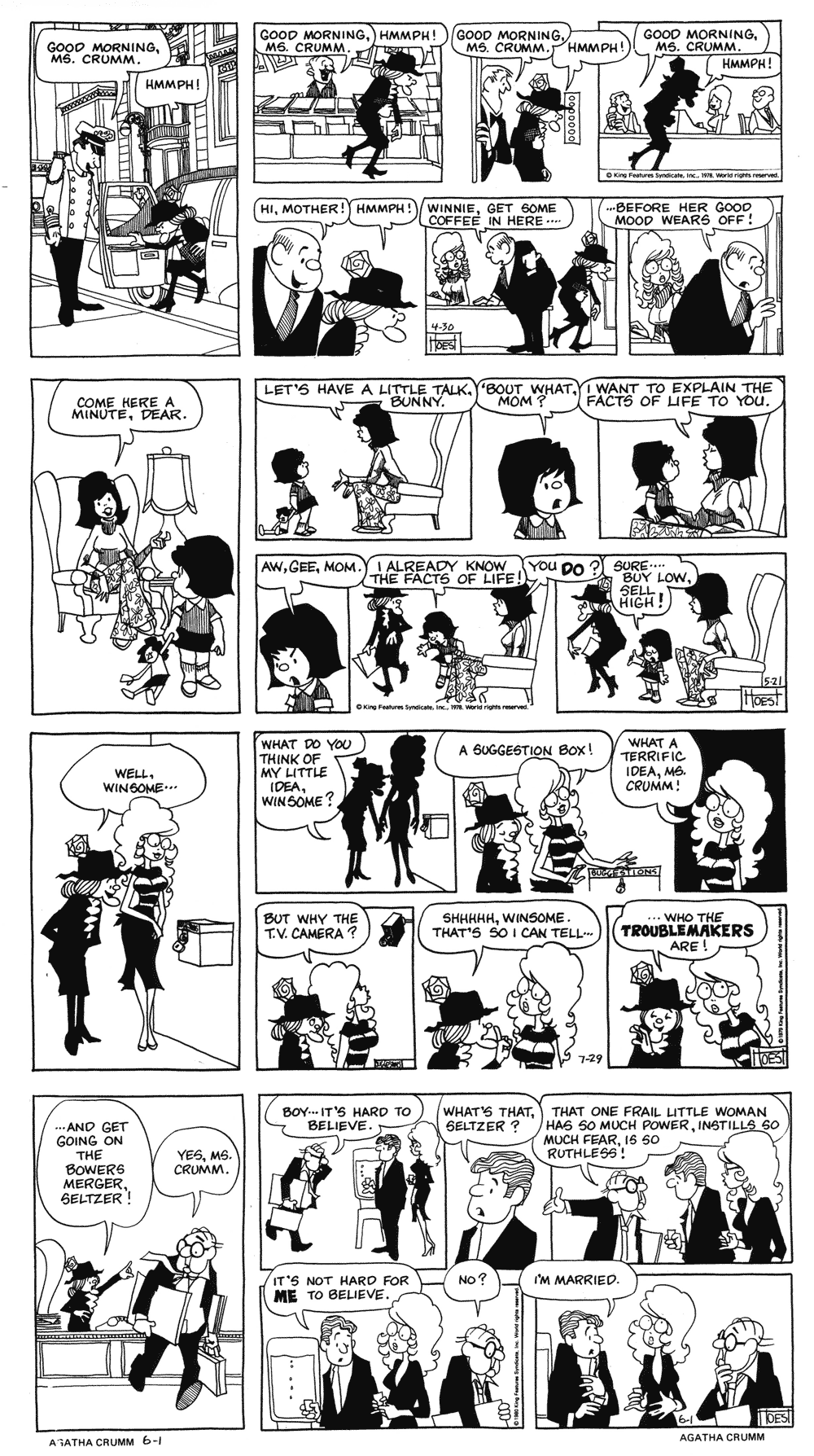 Other characters include her personal physician, who always has his golf bag over one shoulder; gorgeous secretaries, such as Winsome, who’s efficient, and Harriet , who can’t figure out how a file cabinet opens; Umland, a bumbling yes man; Seltzer, the accountant who can’t get his numbers right; and “C.F.,” a distinguished older fellow who serves as Agatha’s boyfriend/companion. 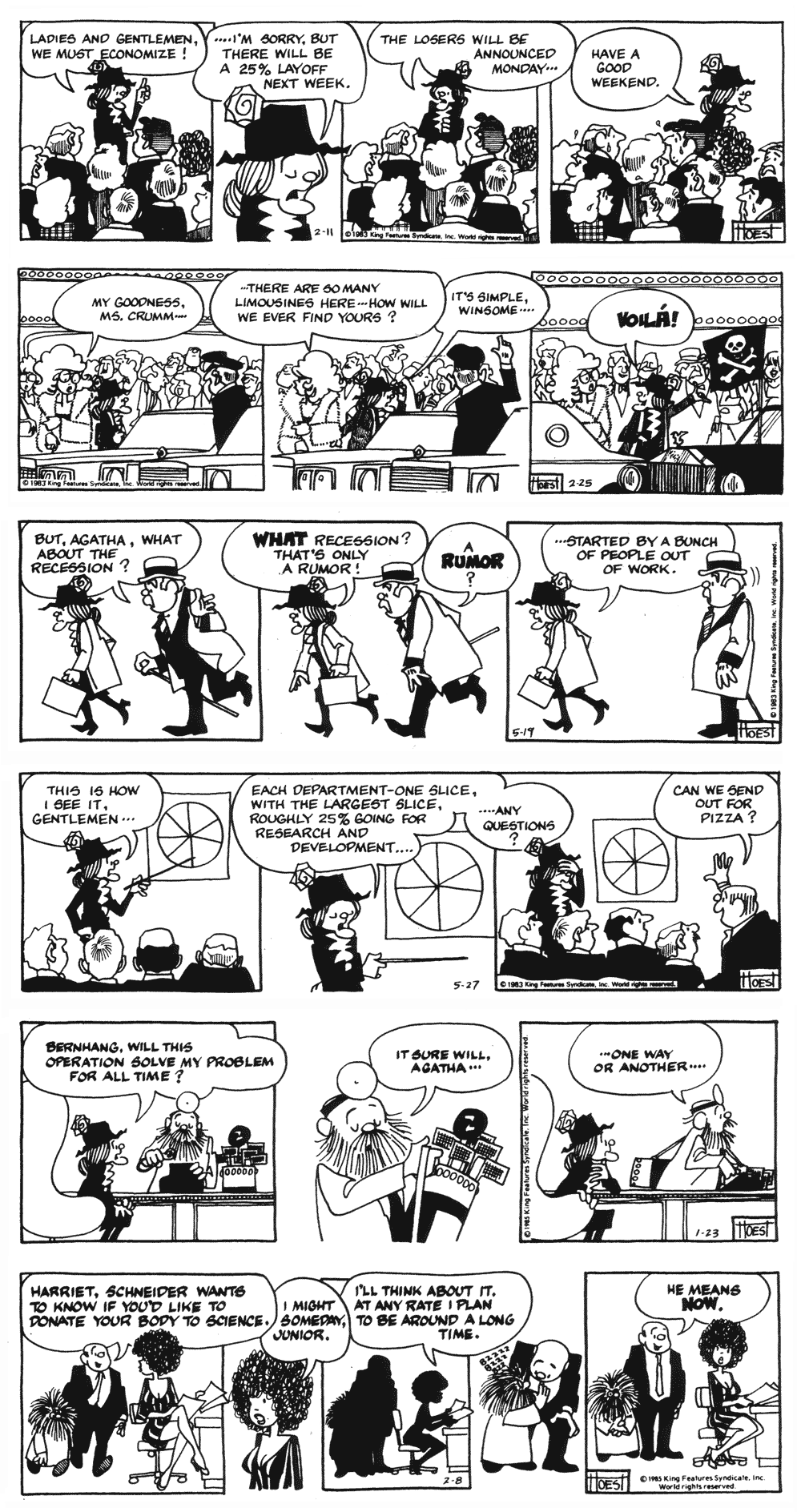 If there was an inspiration for AGATHA CRUMM, it would probably be a woman named Hetty Green (1834-1916), who was a financial genius and, at one time, the richest woman in the world. She was also an infamous miser who penny-pinched to a psychotic degree, even though she had millions of dollars. She was known as the “Witch of Wall Street” because she wore filthy black rags. A hundred years ago, her name was synonym for avarice.

Maybe that sort of a character is hard to warm up to. Still, it can be funny when times are good, and AGATHA CRUMM lasted in syndication for nineteen years.

Two weeks ago, I did a blog on DOOLEY’S WORLD by Roger Bradfield. Since then I’ve heard from Mr. Bradfield, who was pleased to have DOOLEY remembered. Perhaps, we’ll have another DOOLEY-themed post in the future. There is a lot more material…I didn’t even touch the Sunday strips.

If you’re a fan, Mr. Bradfield has his own website at http://www.rogerbradfield.com/index.html.