Ask the Archivist: Dooley’s World and Welcome To It

Mr. Bradfield (born 1924) is an accomplished commercial artist, fine artist and  children’s book  author/illustrator, who is noted for his “BENJAMIN DILLEY” and “PICKLE-CHIFFON PIE” titles.

Forty years ago next month, Mr. Bradfield and King Features  premiered a strip called “DOOLEY’S WORLD.” The dramatis personae of this daily and Sunday comic consisted of Dooley, a grade-school boy and his friends: a wind-up knight named Norman; another clockwork figure called “The Professor;” Max, a small mouse; and Thelma, a rag doll , who is larger and meaner than the rest.

Max the mouse is sensitive, a little unsure of the world,  and somewhat gullible. Perhaps, he is supposed to be a child himself, though he can be introspective and wise too. The Professor is definitely not. He is absolutely sure he knows everything and is, of course, always completely wrong. He is given toward making up crazy, convoluted versions of any given topic, eagerly accepted by Dooley when doing his homework. The kid must have failed every course! Norman is not given much to do but look on, close his visor to show his displeasure, or react to the oft-launched puns in the strip with his own comeback of “Good Knight!” Dooley himself is usually straight man for the others, but he often talks about his parents, who are unhappy with their lives, apparently poor, and whom argue constantly. His father hates his job. His mother is an incredibly bad driver, etc. Perhaps, this is supposed to be a projection of a boy’s imaginary friends, yet they seem to live lives of their own while Dooley is away at school.

But the real focus is often on the ill-tempered Thelma, who is often seen kicking or hitting the others. She has all the self-centered, greedy impatience of an undisciplined three-year old, and she’s too big to stop. A lot of the strip’s humor centers on how they deal with Thelma’s non-stop bullying, and their usual failed attempts at preventing it.

Other characters added in during the course of the series are Neville, a Jack-in-the-box who inexplicably is in the throes of unrequited love for Thelma; Mopey Dick, a sullen Goldfish; and a rock simply called “rock” that could emit thought balloons, but couldn’t actually communicate with members of the cast. Their “world” is a very tight-knit one; we never see  any adults or other kids.

Bradfield’s writing could sometimes take a gooey turn, with a re-occurring tag line after a warm moment, “A true friend will…” or happy little messages about the value of hugs. But most of the time, he showed a creative flair for philosophy with Such pay-off lines as “The only way to rid yourself of temptation is to yield to it” or “The future always arrives a little before you’re ready for it.” 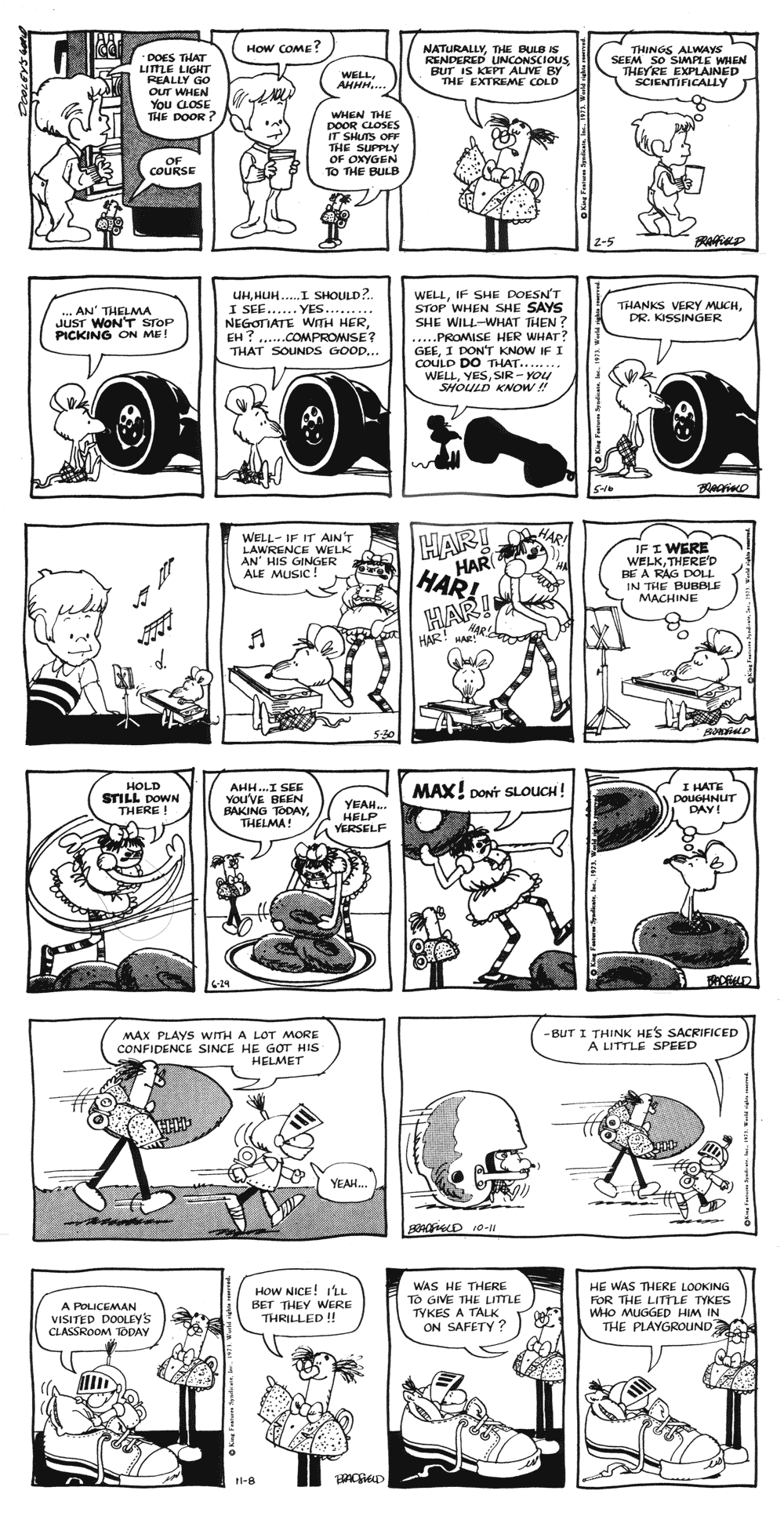 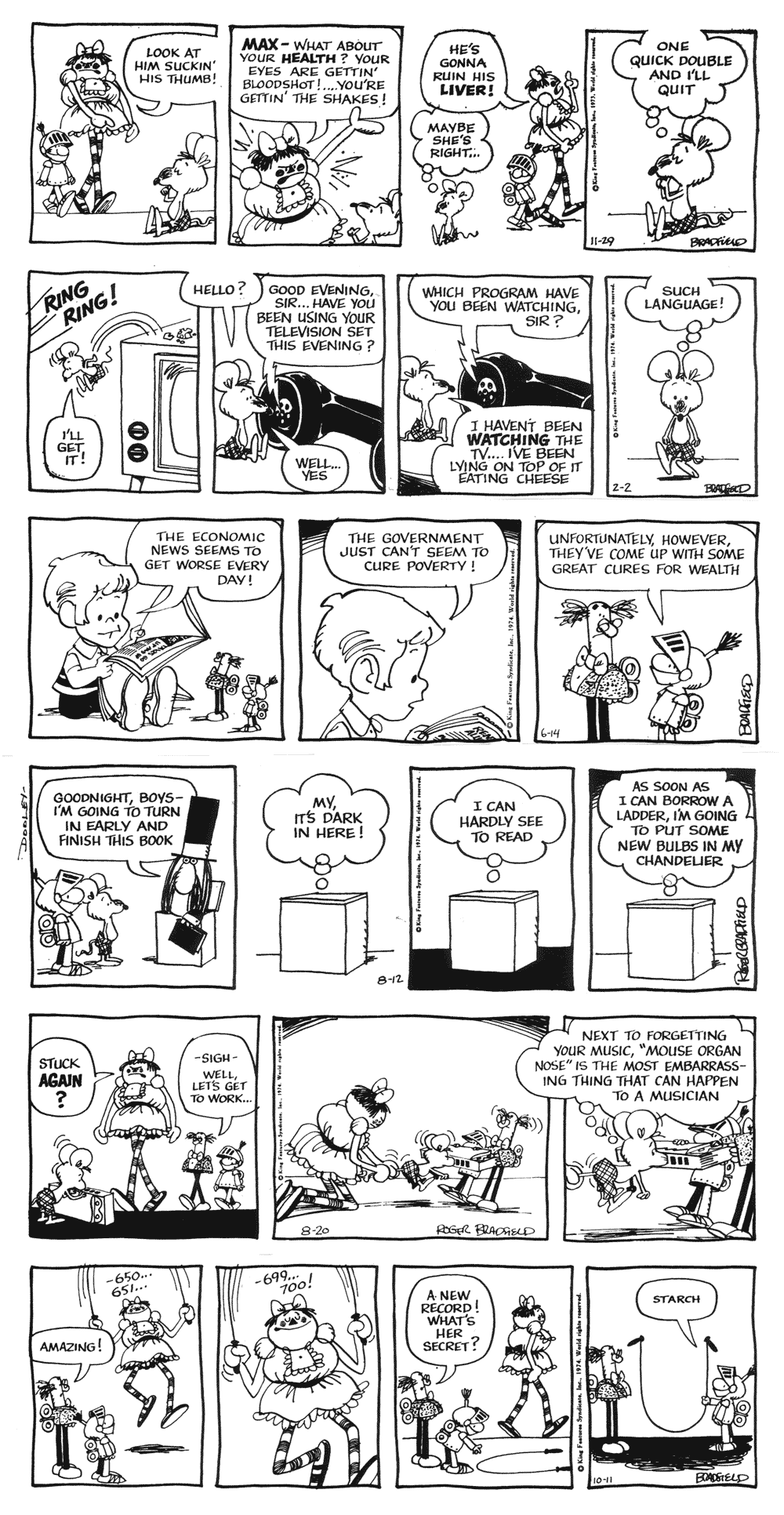 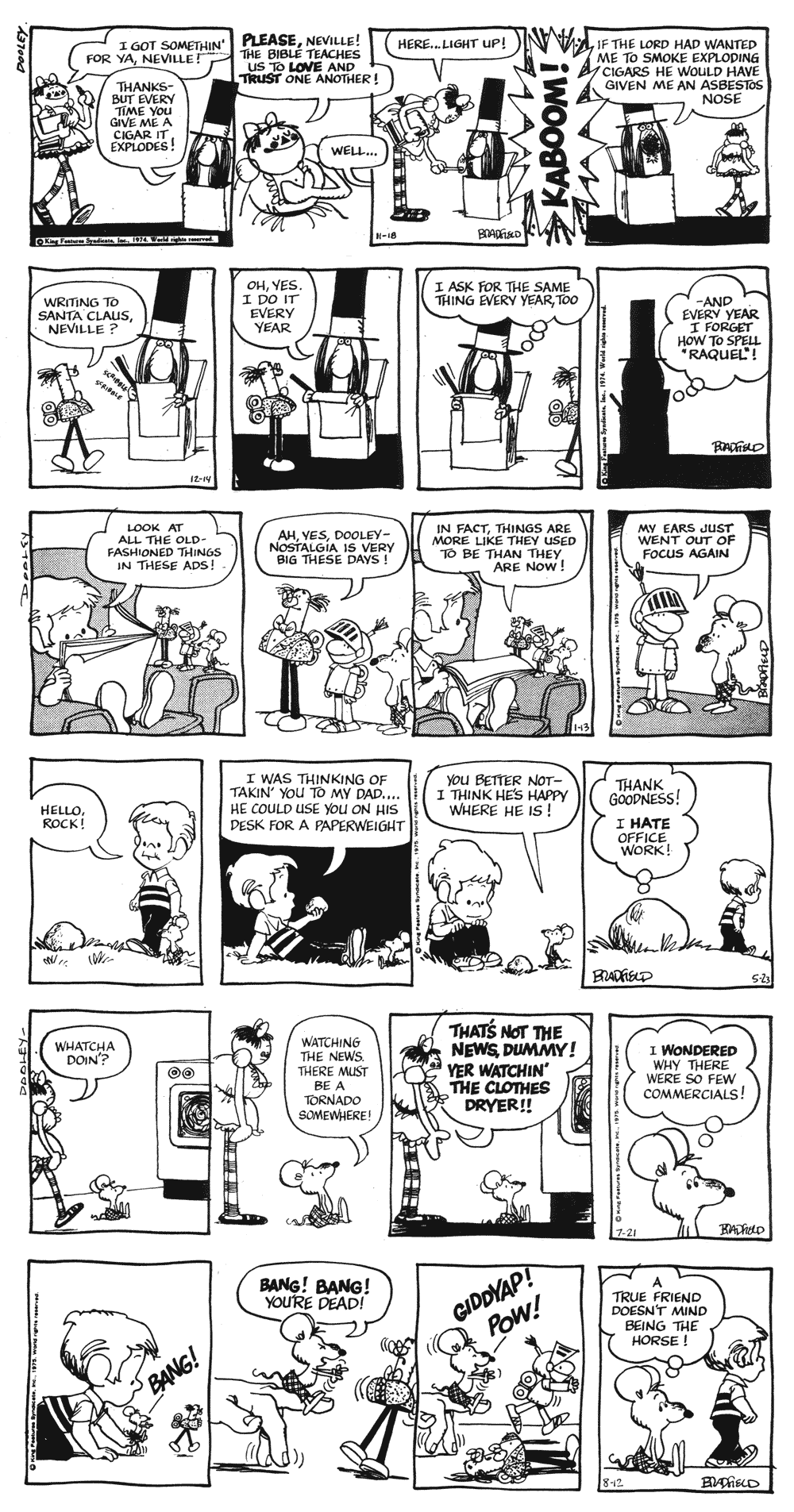 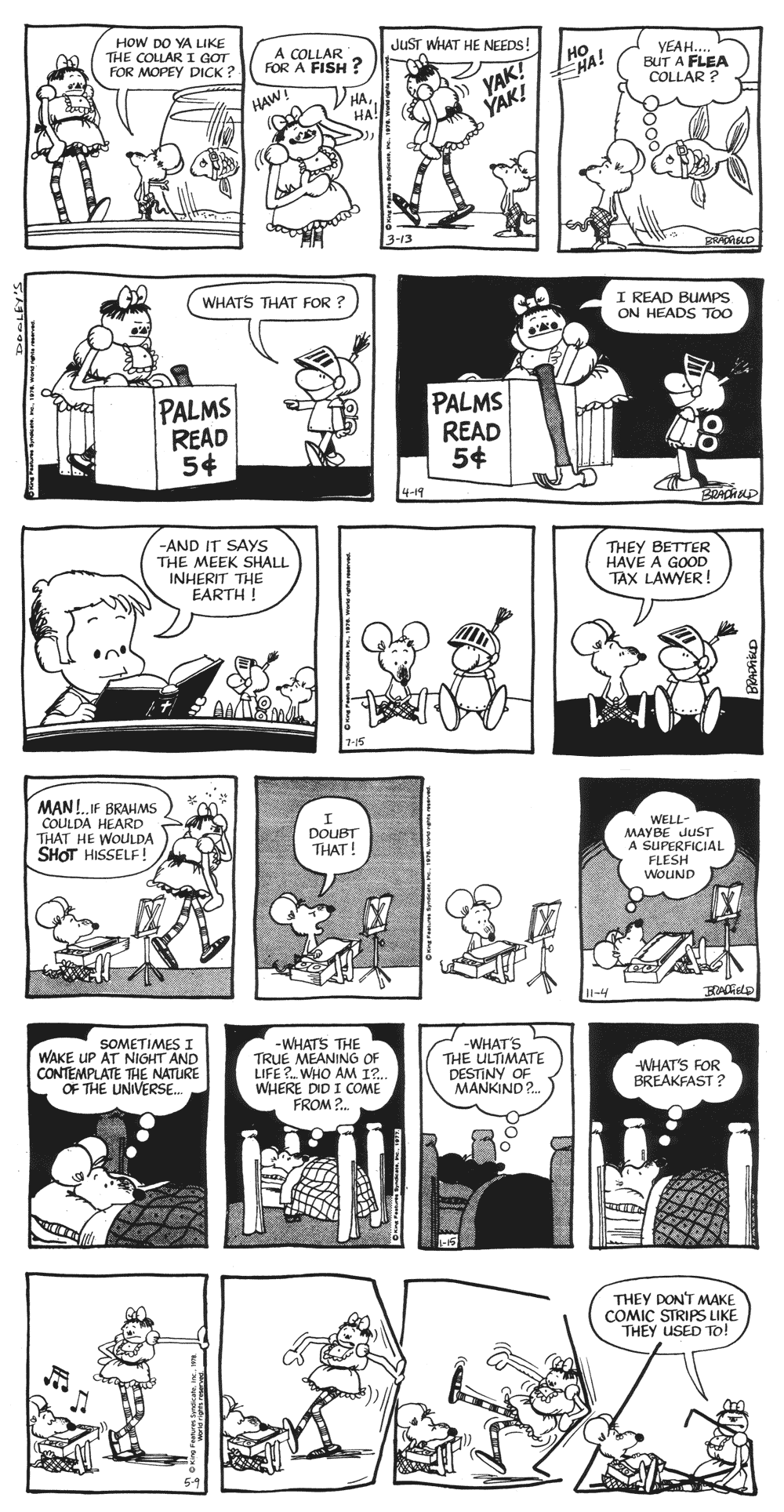 “DOOLEY’S WORLD” came to an end only six years later after its launch. It ran from 11 September 1972 to 2 September 1978. It was an intelligent, likable strip, and I think those of us who read it then will agree.

I’m glad we could find something unusual for MARVIN. I’ll show some current sales artwork when MARVIN turns sixty. So keep reading.

Our sympathies to Mr. Rhoades’ family. Few PHANTOM “phans” showed his dedication to the Ghost Who Walks.