Ask the Archivist: A Shot of Redeye

I’m pleased that you all enjoyed the ancient comic section last week. I’ll scrounge up some others some another time. This week, I offer something a lot more contemporary, a strip not long out of production called REDEYE, the gag-a-day strip about a hapless Chickiepan Indian tribe and their semi-competent chief.

REDEYE was created by Gordon Bess (1929-1989),  whose resume included being a one-time cartoonist for the USMC’s Leatherneck magazine, a commercial artist in Philadelphia, and a greeting card company’s art director in Cincinnati. 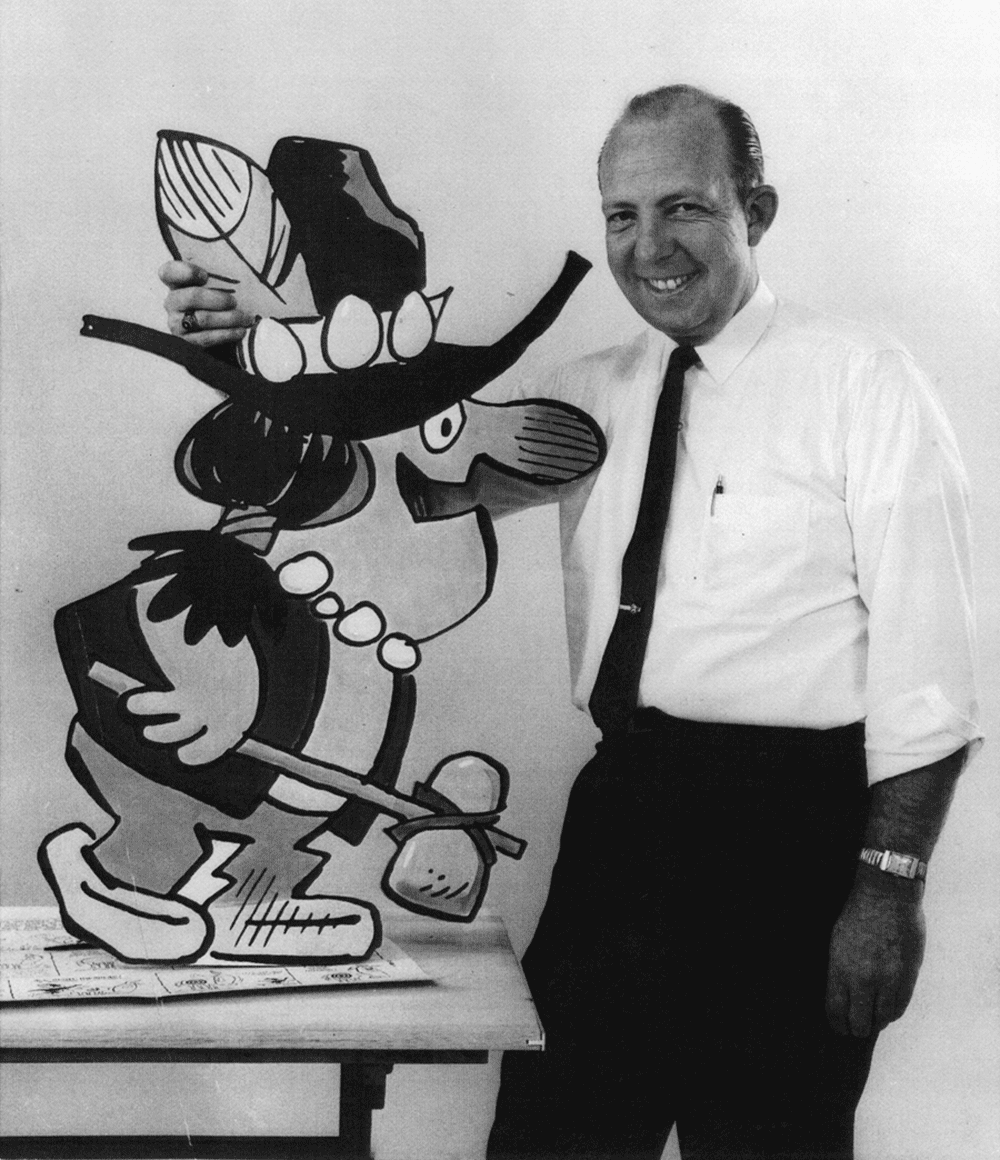 Gordon Bess with a cardboard blow up of REDEYE, probably 1967.

REDEYE made its debut 45 years ago, on September 11, 1967 as a daily and Sunday King Features offering. The comedy was centered on the conventions of Indian life, only turned upside down by casually giving modern sensibilities or standard American family-sitcom problems to the tribe.

The setting is the Chickiepan village in the far west, during the Indian Wars of the 19th century, but Bess had no intention of sacrificing comedy for any fidelity to this premise. So, references to 20th century  inventions and conveniences, such as as bubble gum cards, frozen dinners, transistor radios, karate, “wonder drugs” or “new math”  are made freely. 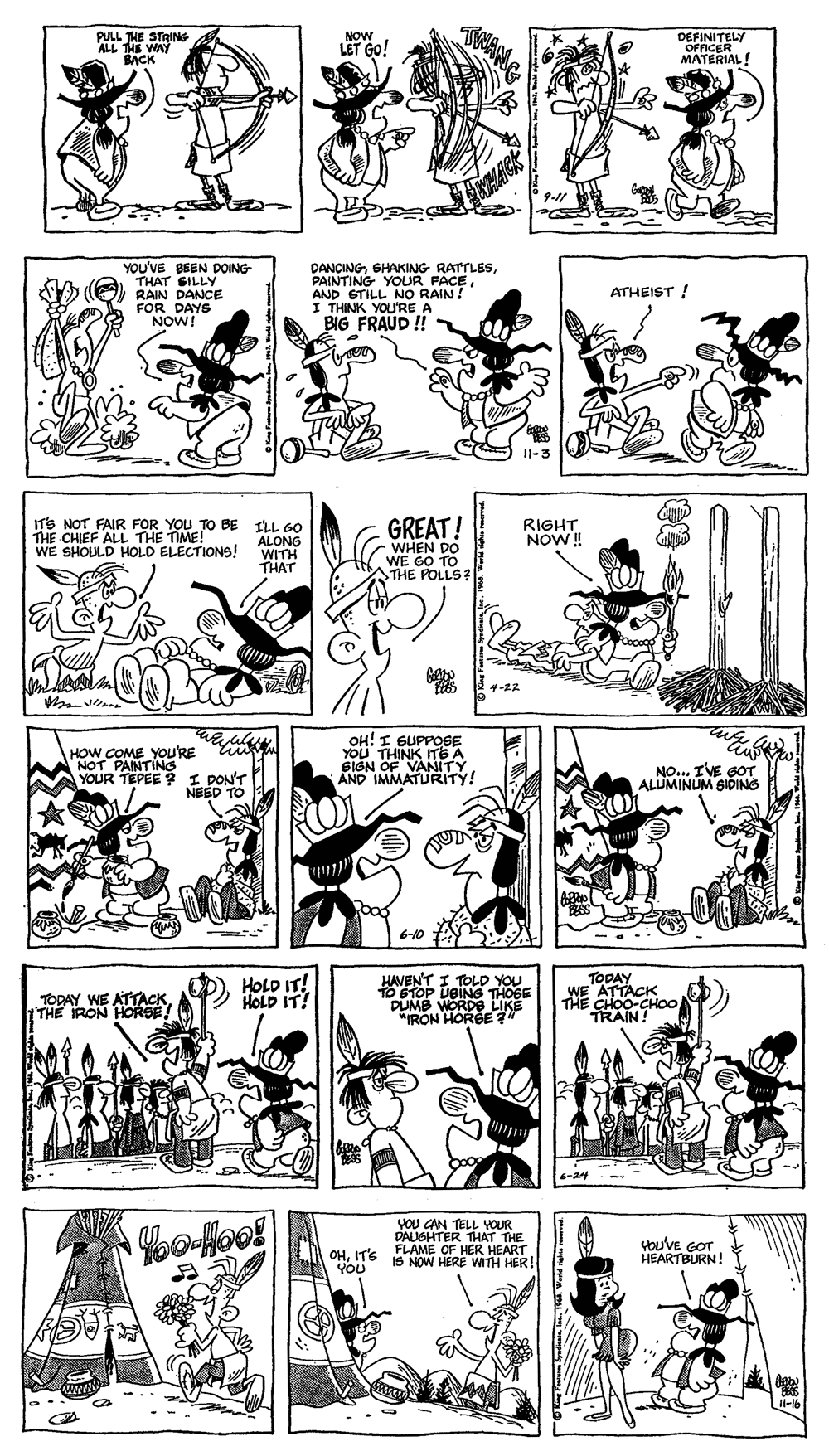 The cast included, first, Redeye himself. Though he is the tribal leader, he is not terribly inspiring, and just as likely to be caught goofing off as doing any leading. His life is mostly taken up with family problems.

His wife, Mawsquaw, is famous for her inability to cook (boiling laundry comes off tastier than the soup), drive (she habitually steers her horse into trees) or discipline her mischievous son. She is, however, quick to punish Redeye, with slapstick Maggie-like retribution.

Pokey and Tawnee are Redeye’s son and daughter. Like most sitcom girls, Tawnee’s taste in boyfriends appalls her father. Tawnee’s big heartthrob is Tanglefoot, a dimwitted brave who shows himself incapable of most anything asked of him, especially anything pertaining to war or other dangers. He proves to be a coward, though he’s usually at Redeye’s side to start the fiascos rolling. 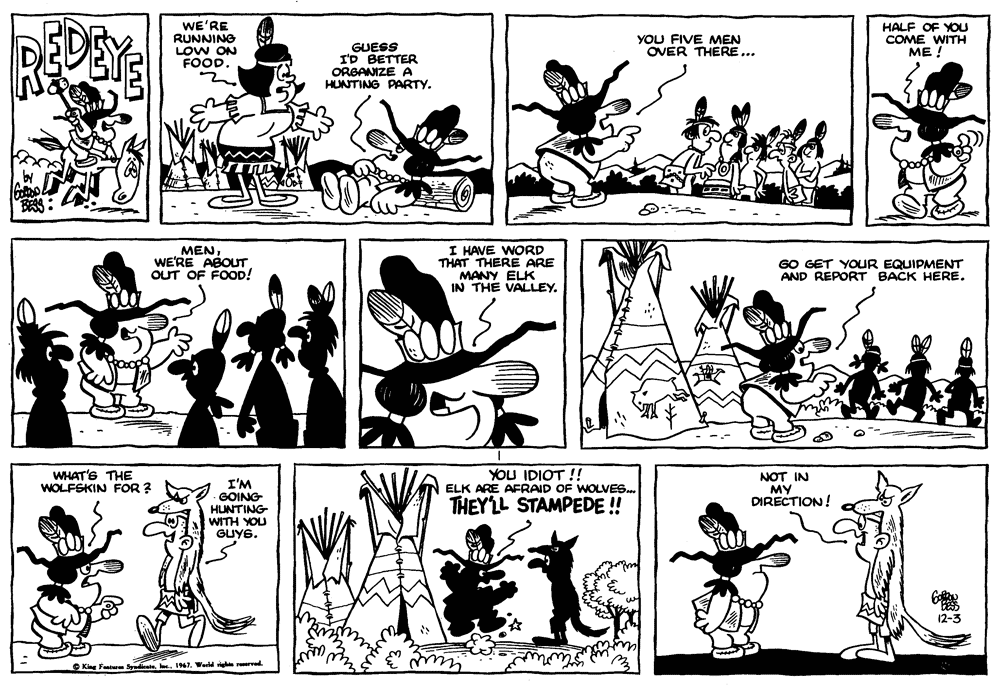 Cowardice is also the way of life for Redeye’s horse, Loco. He hides, runs away or even faints at the thought of joining the fray. His running gag lines have him getting sick at the sight of insects in the grass he eats, or being insulted by other creatures.

Medicine Man was an endless source of gags for Bess because any and all “bad doctor” or medicine gags could fit. 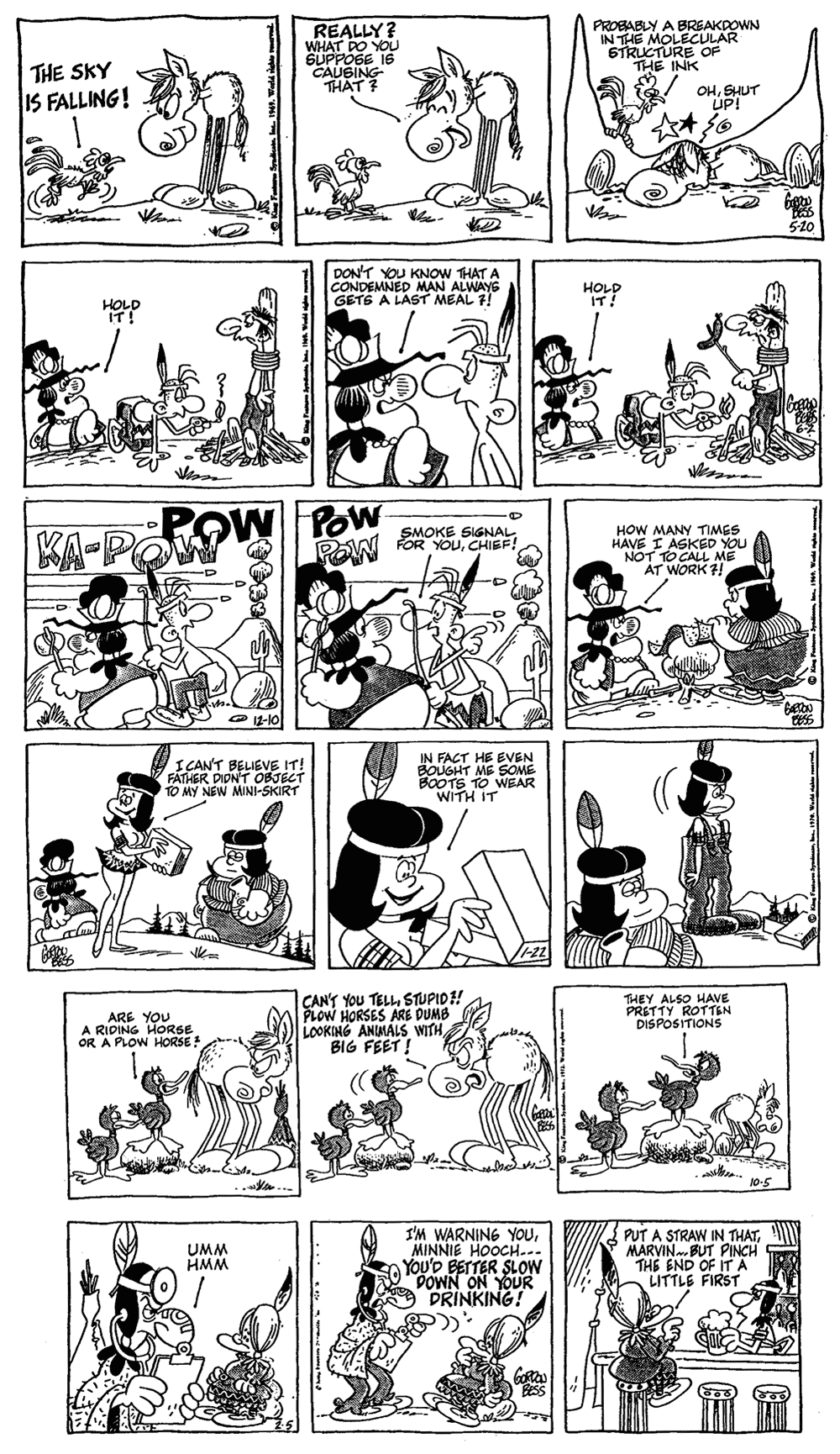 Jerkymiah was the only white man in the cast. He was a mountain man, a trapper and hunter, living in the untamed woodlands .  Bess himself was an avid outdoorsman, growing up in Utah and settling eventually in Idaho, where he could pursue these pastimes. Thing was, Jerky was filthy. His gags often concerned his pungent odor and tiny constant companions.  Ah, wilderness.

Bess did the strip until his health declined in 1988, and he decided to end the strip with the Saturday, May 21, 1988 installment, showing a beleaguered Redeye finally escaping his own strip. But King Features had other plans, and the strip didn’t end. Bill Yates and Mel Casson took over its creation.  Yates soon stopped writing because of his own health problems, and Casson went it alone until his death in 2008, when the strip was terminated. 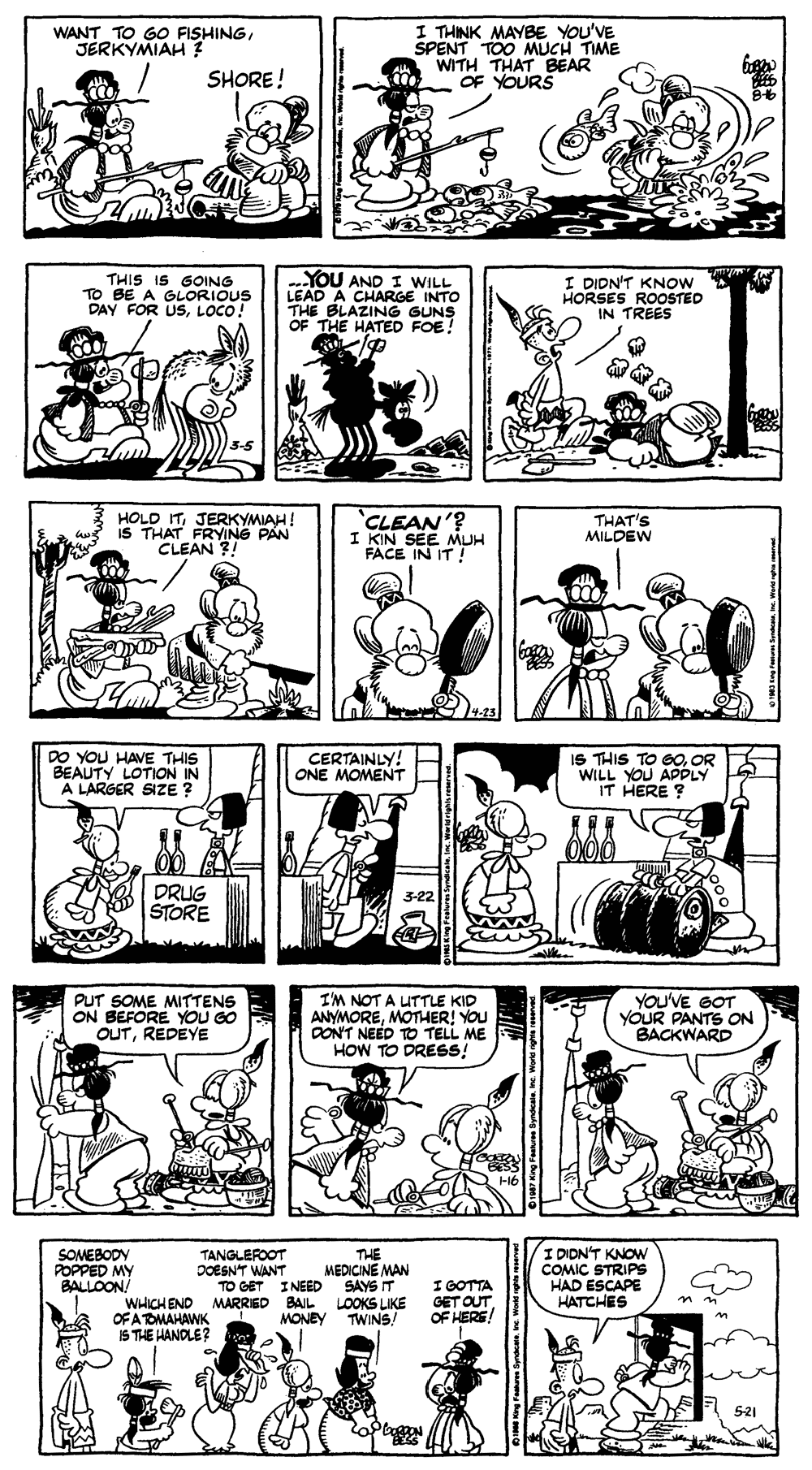 Often REDEYE has been compared to Tom Ryan’s TUMBLEWEEDS.  But outside of the Western theme, the two aren’t that similar. Ryan’s humor was a bit more thoughtful, more cerebral. Bess’s style had far more slapstick action.

In the 1970’s and 1980’s, REDEYE was a very popular strip, especially in Europe. It was translated into 15 languages. In France, where REDEYE was known as  “La Tribu Terribile” (“The Terrible Tribe”), Bess once scored a prestigious award from La Salon Internationale de la Bande Dessinee du France.  That’s impressive just to say. Here in the United States, REDEYE had more than 400 clients  in 1984.  Sadly, it was one of the last western strips of any kind. 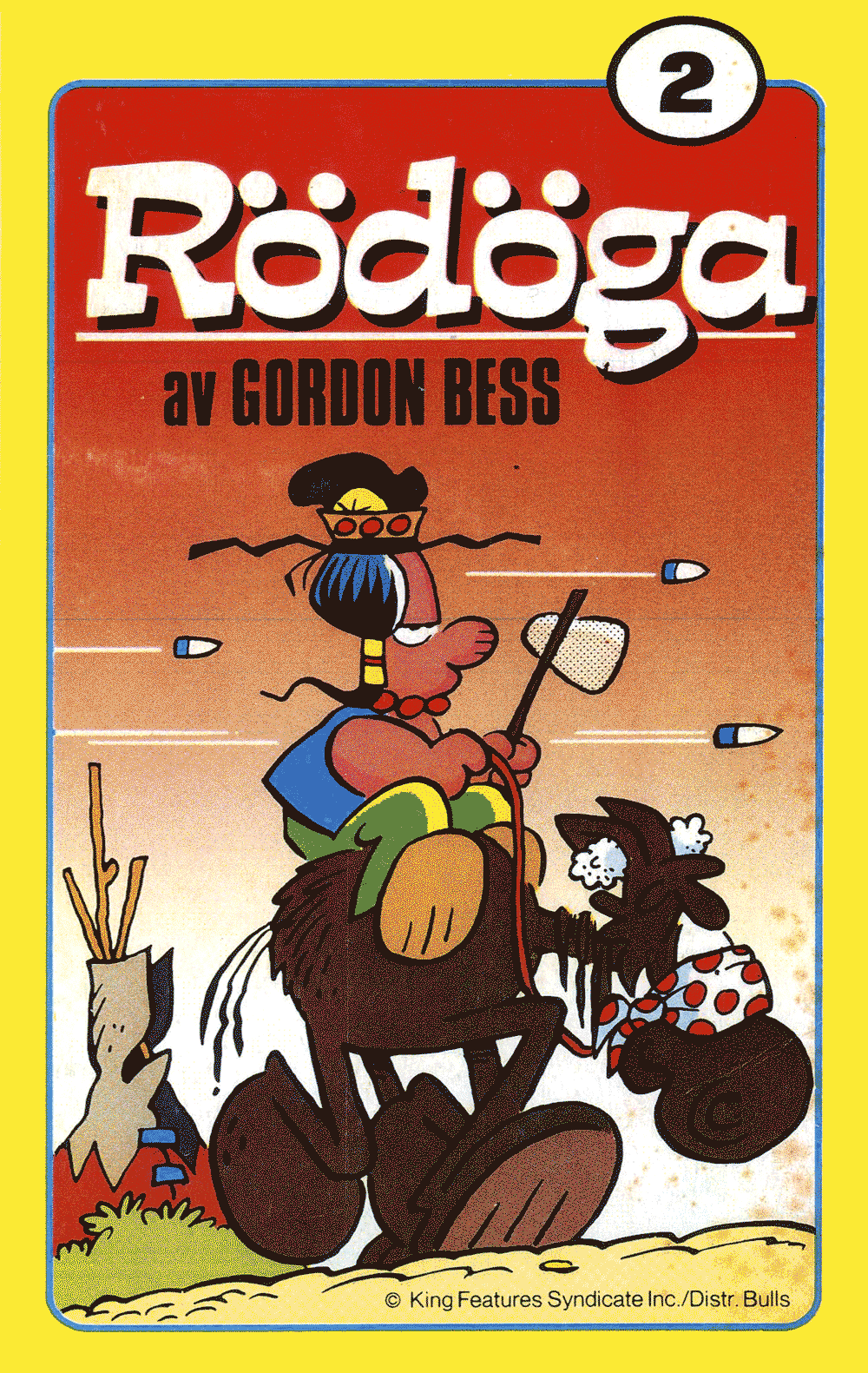 A Swedish REDEYE comic book from 1984.