Ask The Archivist: A Look At JUDD SAXON

This year marks the 50th Anniversary of the discontinuation of the short-lived continuity strip JUDD SAXON, drawn by Ken Bald and written by Jerry Brondfield.

Bald was a comic-book pioneer, starting his long career during the 1940′s, working on early Timely/Marvel series like SUB-MARINER and CAPTAIN AMERICA, and CRIME SMASHER at Fawcett. He’s still active, at 91, recently getting a few press notices for his contributions to the 1970’s “DARK SHADOWS” strip, as a tie-in with the recent film version.

His first venture into syndicated strips was JUDD SAXON, a daily only for King Features, which premiered April 8, 1957. The titular character, Judd, was a Korean War vet just out of college, and anxious for a big business career. 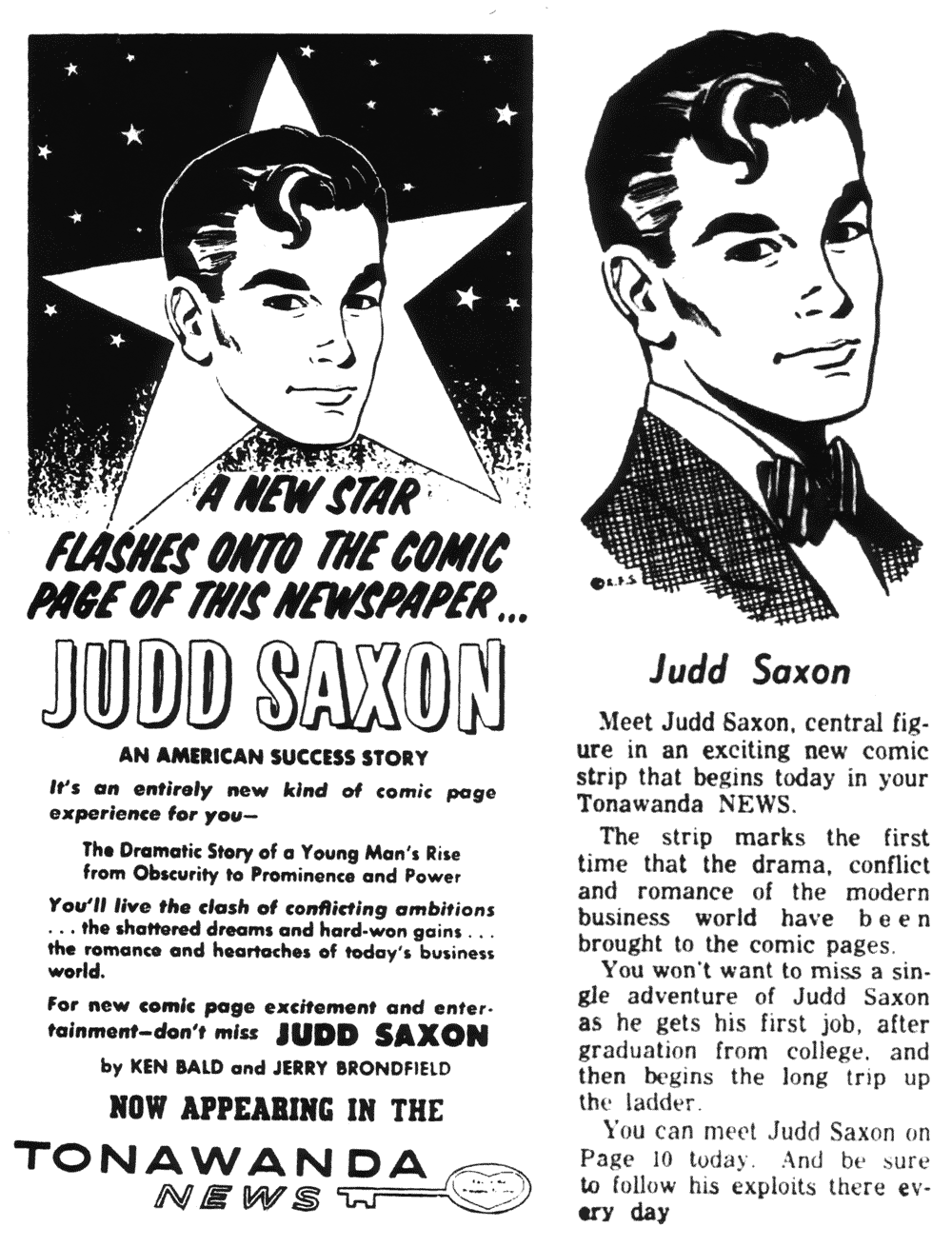 In the strip, Jud went to work for Ben Hutchins of the venerable old Hutchins glass company, a mid-size company in a mid-size city. Ben was a no-nonsense, hard-nosed industrialist with a soft heart.

The company expanded, along with story possibilities, when Mr. Hutchins joined forces with a rich widow, Paula Bosworth, who owned a huge corporation. Bosworth Enterprises, as it was known, had interests as diverse as oil refining and tape manufacturing, even experimenting with “space food” projects. Judd’s job description might have been “executive assistant,” but he is sometimes referred to as a “troubleshooter,” and is dispatched to various locales to face dangerous adventures for the company, as well as standard soap-opera fare involving office and social intrigues. 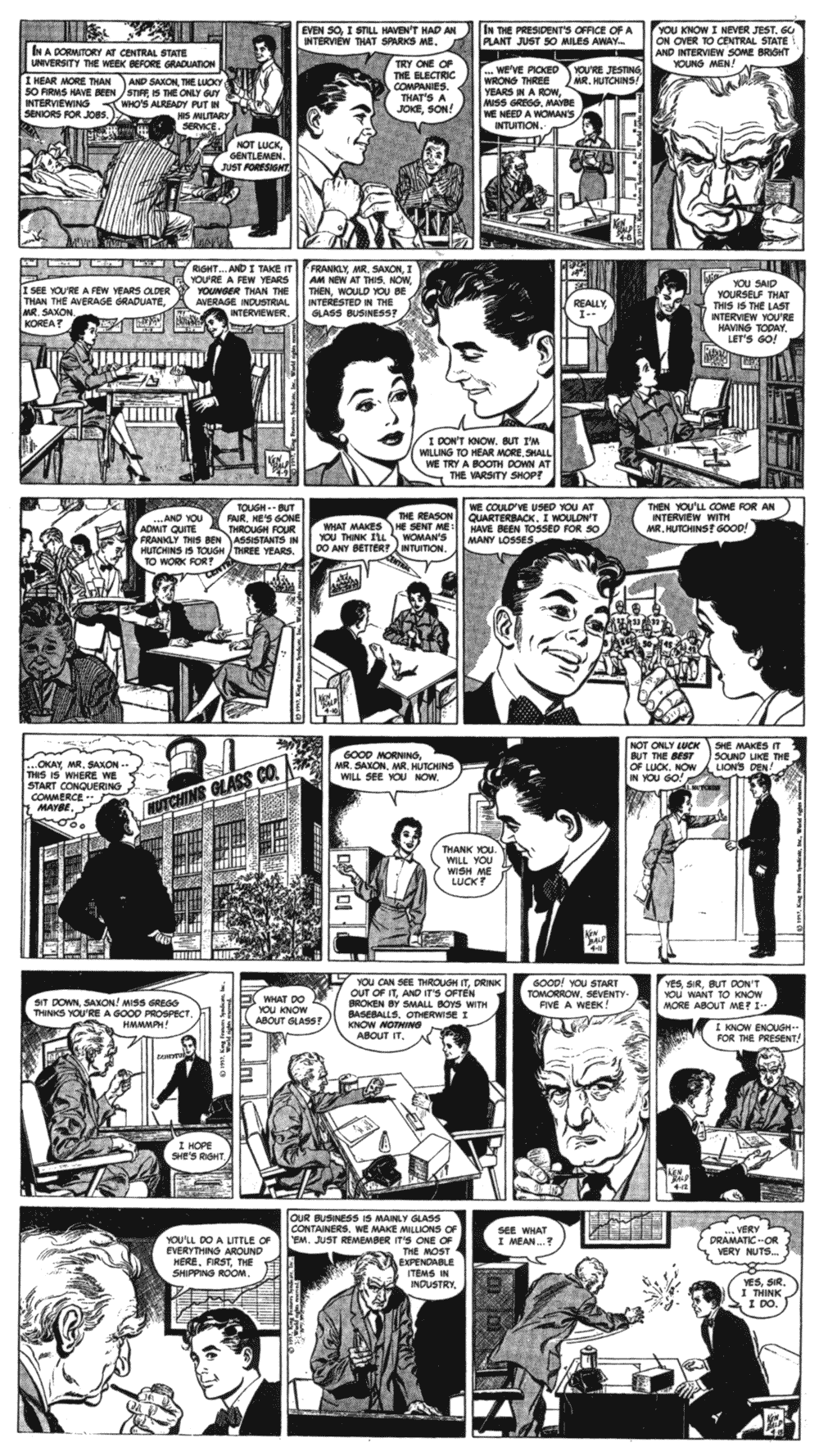 Hutchins had a beautiful secretary named Peggy Gregg, who became Judd’s love interest. Complications arose when another man, a shady social gadfly named Clint Potter lured her away and nearly married her, but she broke off the engagement. In the meantime, Mrs. Bosworth’s scheming daughter Jessica vied for Judd’s affections. Judd never lost interest in Peggy, so it was a love triangle from then on. 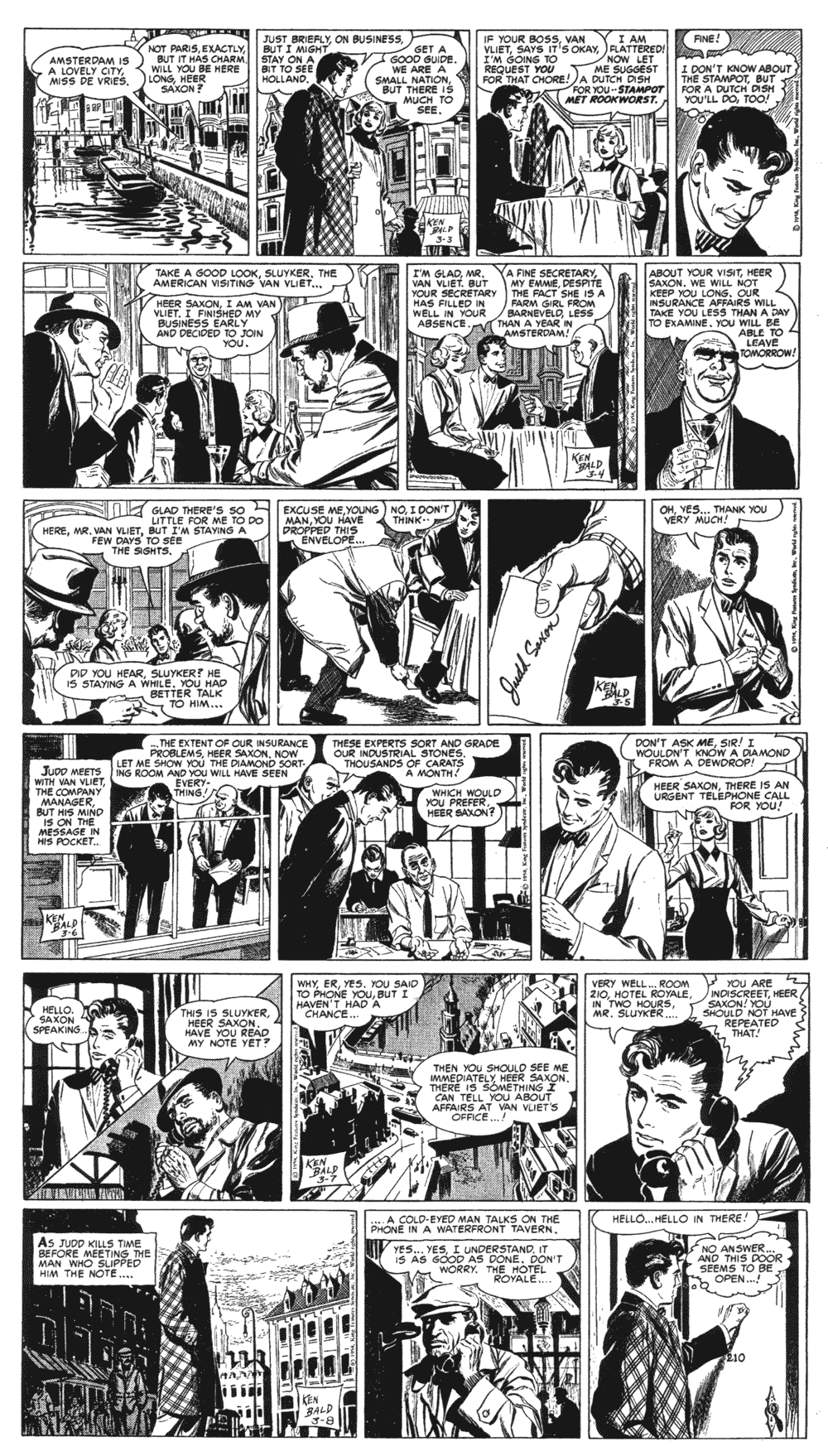 Some cloak-and-dagger spy story from 1958

In the early years of the strip, Judd is sent on missions to investigate industrial sabotage in a backwoods bayou, some diamond smuggling in Holland and gangsters trying to muscle in on the company. The breadth of the Bosworth interests was as far reaching as any real life major international corporation, thus affording just about any sort of adventure that Bald and Brondfield could think up. 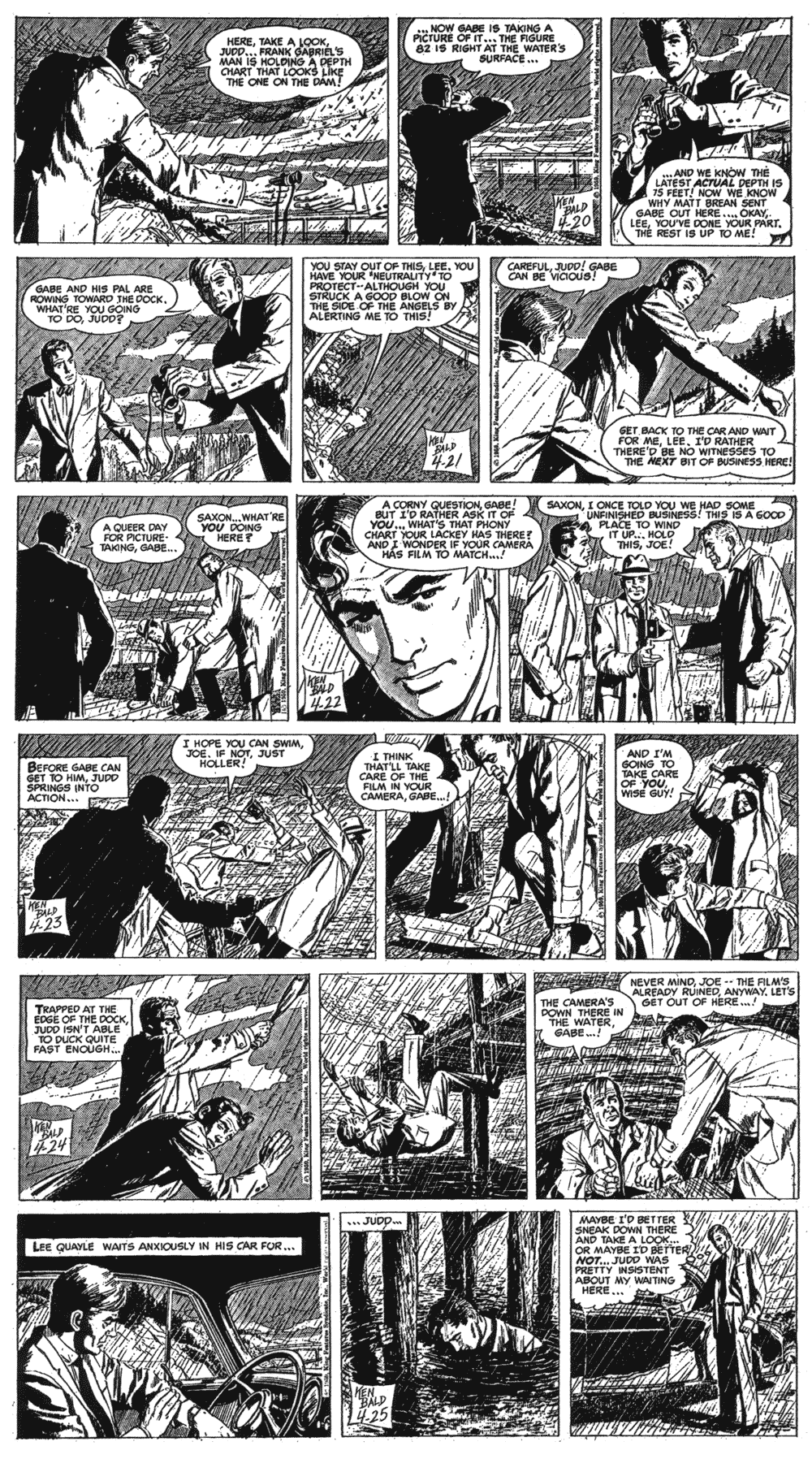 An example of the impressive penmanship of Ken Bald

But the real personality of the strip evolved about midway through its’ run, that being predominantly a romance series, concentrating on Judd’s encounters with gorgeous young ladies who crossed his path. The settings went from working class city to high society. The super-rich, fancy clothed jetsetters are the folks who take up the last couple of years of JUDD SAXON. In the new frontier era, it was popular to see the upward path to wealth and sophistication (like Judd took) as available by way of American business. 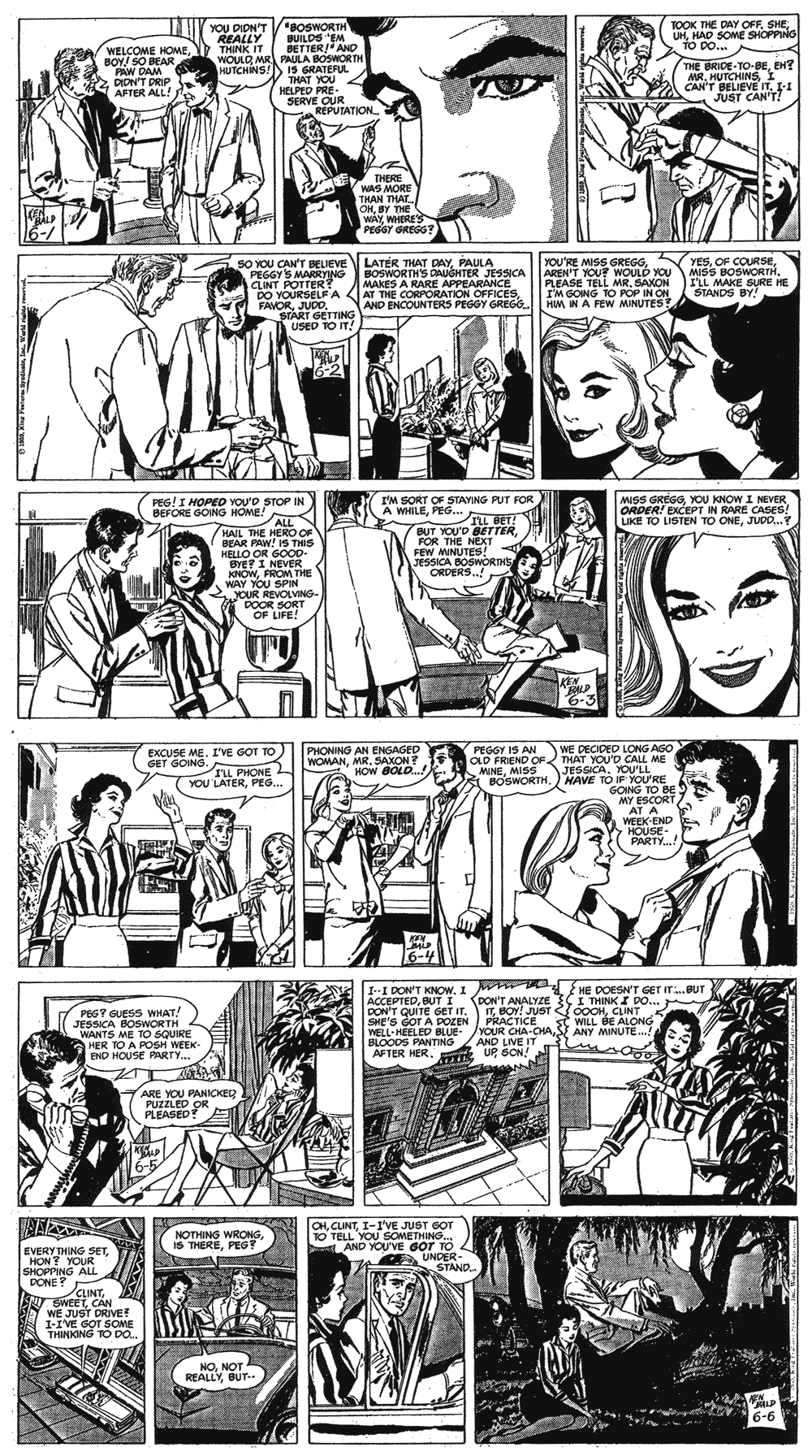 The girls in Judd’s life: Peggy and Jessica.

When it came to an end, Bald went on to do a far more successful series, the DR. KILDARE strip, which lasted 22 years. We’ll look at that strip later this year. 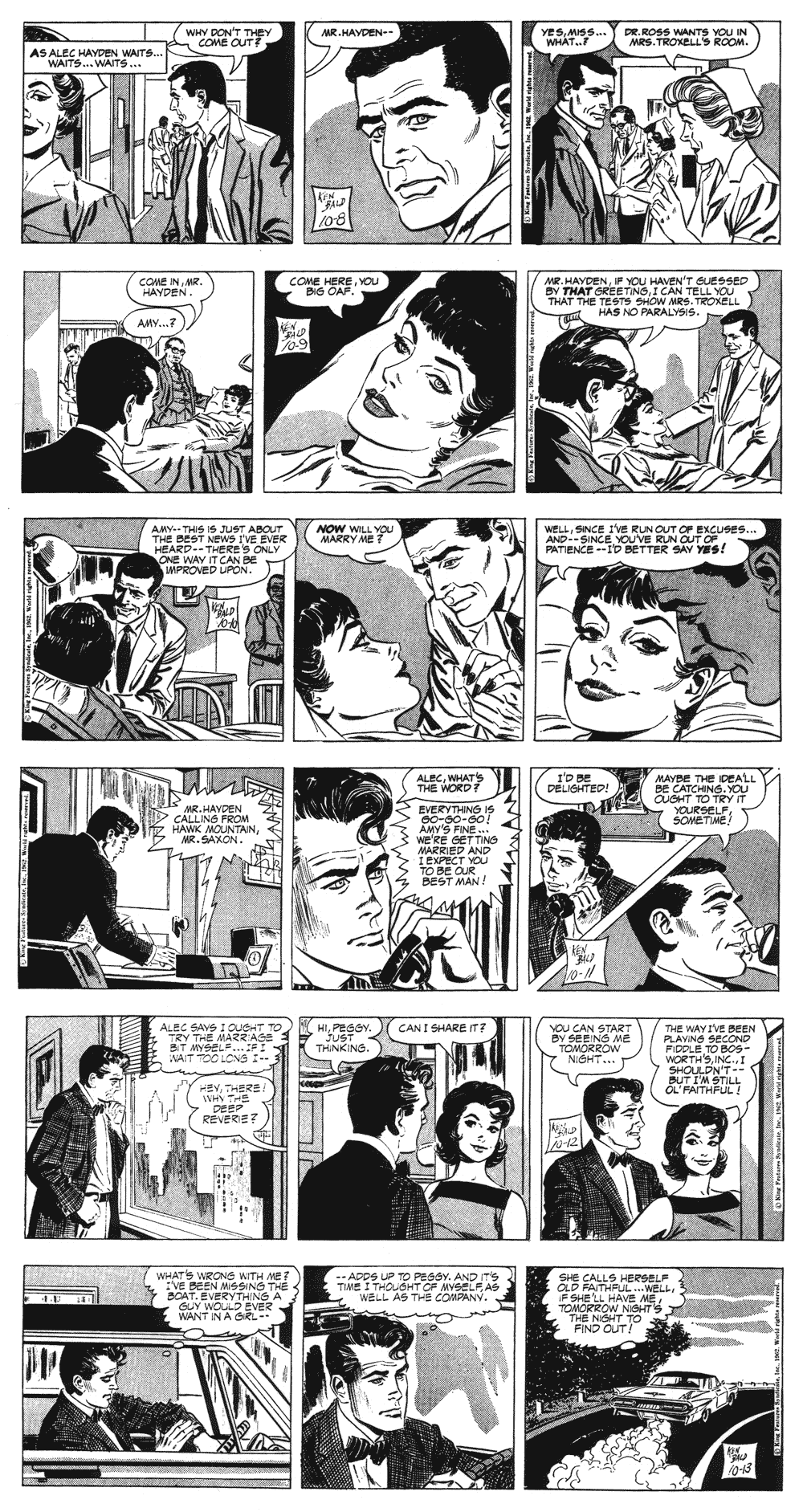 Now onto reader email and comments:

The Journal-American was a nice newspaper. It had the best columnists, editorials, and point of view in New York. The comics were great, not just because they were King Features, but they gave you two big pages full daily, and in addition to the Sunday comics, it had a Saturday tabloid section for many years. Several of the evening Hearst papers offered that too. The Journal-American started having a Saturday section in 1922, while it was still the Evening Journal. I’ll have to do a spot on these sections, which offered a lot of the King Features comics that were more obscure.

Foreign comics have had a very hard time geting syndicated in the United States, though there have been some. The British strips POP, ANDY CAPP and FRED BASSETT come to mind. A couple of pantomime strips got around, including G. WHISKERS, a French series and a Swedish strip, which for U.S. use was rechristened “ADAMSON’S ADVENTURES.”

The only one I can think of off the top of my noggin that was originally in another tongue was the Argentine series, “PATORUZÚ,” by Dante Quinterno, which was originally in Spanish, of course, but translated in English in the pages of the obscure New York  daily tabloid, “PM,” in 1945. The newspaper had a small syndicate (its’ only successes were CLAIRE VOYANT and BARNABY), but I don’t know if it ran anywhere else. It was a huge favorite in Buenos Aires, but it made no indent here.