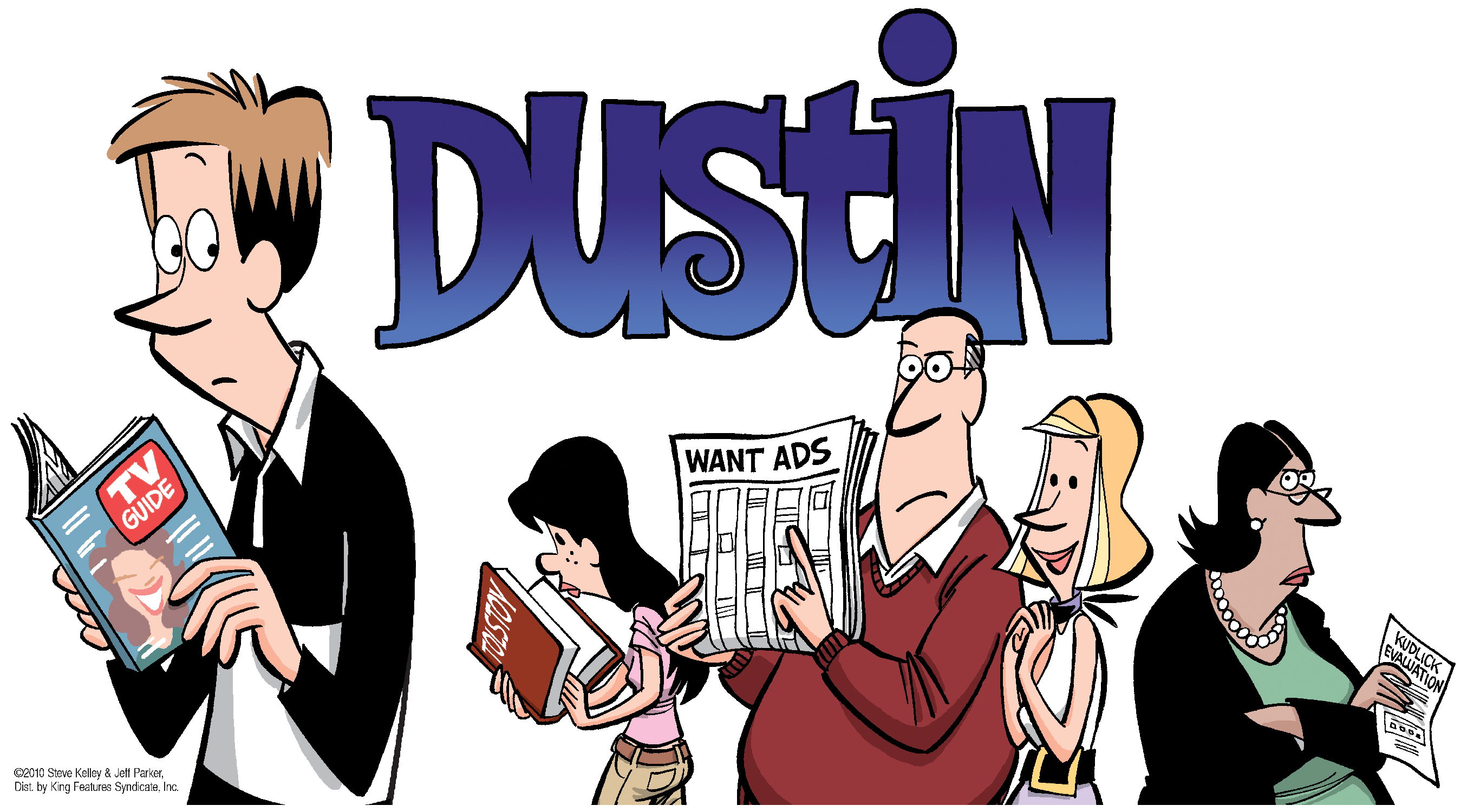 Today marks the debut of our new comic strip “Dustin” in newspapers nationwide. And no one can describe the feature any better than my collaborator, friend and funnyman, editorial cartoonist Steve Kelley in this column he penned for his paper The Times Picayune in New Orleans:

Okay, now that I have your attention, let me explain.

Jeff Parker, Florida Today’s political cartoonist and I are launching a comic strip — Dustin — nationwide on January 4th. At its heart is the Kudlick family — Ed, Helen and their two children, Dustin and Meg.

You must be thinking, whoa, Steve that is such an original premise — husband, wife, two kids — does your sizzling creativity know no bounds? Again, let me explain.

Dustin is what pop culturists call a boomerang kid — in his case, a 23-year-old college graduate who moves back in with his parents to save money until he is established in the workforce. But as sociologists (and common sense) are quick to remind us, these arrangements seldom proceed as anticipated. Sometimes, the temporary houseguest grows comfortable with the situation. As his stay extends beyond what anyone intended, nerves begin to fray and relationships are tested. The nest begins to feel crowded.

“Dustin won’t live with us forever,” Helen insists to her husband. “He’s just trying to find himself.”

“In that case he should look on the sofa,” Ed suggests. “That’s were I usually find him.”

The greatest challenge of Dustin was to take an unemployed, under-motivated twenty-something who’s happily ensconced in his parents’ home and somehow make him likable. So to demonstrate that he’s not beyond redemption, Dustin takes temporary jobs in every imaginable field that last a day or two, a week, or — to be honest — until the jokes run out. He then quits or is fired and the process begins anew. Among other things, he serves as a meter maid, a private investigator, an ice carver’s apprentice, pet sitter, golf ball retriever, Starbucks barista and a balloon-tying clown at a child’s birthday party.

Jeff told me that when he describes our comic strip to people, they often tell him, “Oh, I have a Dustin living at home.” He’s quick to remind them, “Yes, but ours is funny.”

Playwright Neal Simon taught that humor is most often the byproduct of conflict. Not an angry, deep-seated Mideast kind of conflict, mind you. Rather the simple, organic, Mars/Venus variety, wherein two people merely disagree on how to accomplish a particular goal or task. With that in mind, we populated Dustin with relationships that are easily, naturally at odds with each other: husband and wife, parent and child, brother and sister, boss and employee. The idea is to have multiple, recurring comedic themes to exploit.

So, there is man humor:

Helen: You should have seen this woman at the mall. Tight top… plunging neckline… cleavage city! It was disgusting.

Ed: You’re right sweetheart. I should have seen her.

Ed: Helen, I made a hole-in-one today! In your wildest dreams, did you ever think I’d make a hole in one?!

Helen: I hate to break it to you, Ed, but in my wildest dreams, there’s not a lot of golf being played.

Dustin: Dad, what does your subscription to the newspaper cost?
Ed (as Helen peruses huge department store ads): About $800 a month, but that’s just a guess.

Waiter (to Dustin and his date): We have a nice house wine for $14 a glass.
Dustin: What have you got in a nice apartment wine?

Boss: It appears some of these items on your resume are overstated.

Dustin: Okay, so I fudged a little.

Boss: Fudged? I half expected it to be signed Willie Wonka.

Many suggest that starting a comic strip as newspapers suffer economic upheaval is unwise. But political cartoonists are happiest when challenging conventional wisdom. Why not give readers a fresh, entertaining reason to subscribe?

If nothing else, we’ve proved that a couple of cartoonists working long hours for two years can produce a guy who has no job.

Dustin is stretched out on the sofa. He tries to reassure his father:

“Come on Dad, it’s not that I’m unmotivated. I’m just waiting for my ship to come in.”

Looking up from his newspaper, Ed replies: “So was Gilligan.”

So there you have it. We hope you will grow to love Dustin as much as we do, and not mind him taking up space in your funny pages.

For a local take on Dustin’s debut in Florida Today click here, and nationally in USA TODAY here.