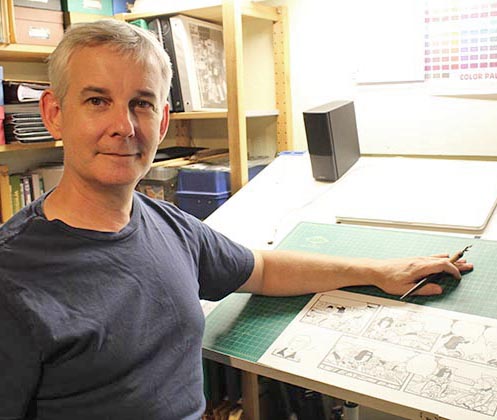 As we continue to celebrate the 40th anniversary of the 1980 Flash Gordon movie and our new Flash Forward anthology strip, we decided to get together with one of the participating artists and former writer Jim Keefe! As you may know, Keefe drew and wrote original stories for Flash Gordon from 1996 to 2003 for King Features, so what better person to debut Flash Forward than him??

This week we sat down with him to discuss all things Flash Gordon, as well as some behind-the-scenes stories from when he worked on the strip back in the day (did you know that he was initially rejected from taking over Flash??). Continue reading below for the full scoop!

Thanks for joining us, Jim! We’re here celebrating the 40th anniversary of the 1980 Flash Gordon movie (not to mention almost 86 years of Flash comics!). It’s incredible to see the character still alive in stories and media today after so many years. Isn’t it crazy?!

“Alex Raymond’s Flash Gordon set the standard for action and adventure right out of the gate, so no surprise there!”

So tell us a bit about how you initially got involved with Flash Gordon in 1996.

“I was on staff at King Features (Colorist in the Comic Art Department) when I first heard they were shopping around for a new artist. That was back in 1993. Always looking for an opportunity to get a drawing gig, I got a copy of the current Flash Gordon script, drew up some sample pages – aaaaaaand was promptly rejected.
A couple years went by without a new artist being chosen so I decided to try my luck again. I submitted another set of sample pages but this time from a script I had written myself. My thinking being I could write to my strengths as an artist. I also went to the added effort for my second attempt to transfer the pages to watercolor paper and fully color them to better show what the finished strip would look like (this was pre-Photoshop days). The extra work paid off as I not only got hired as the artist, but King asked me if I was interested in writing the strip as well. In a neat twist, the sample pages I submitted ended up starting off my first story that saw print.” 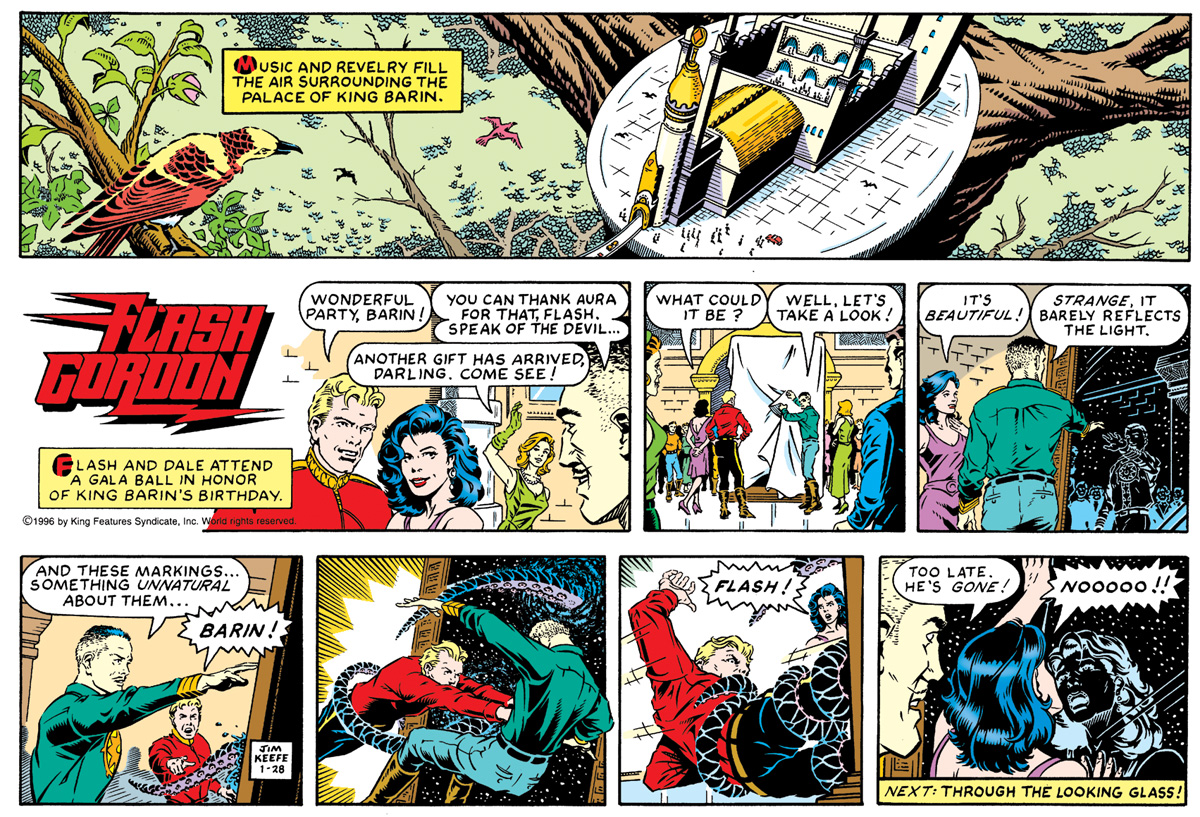 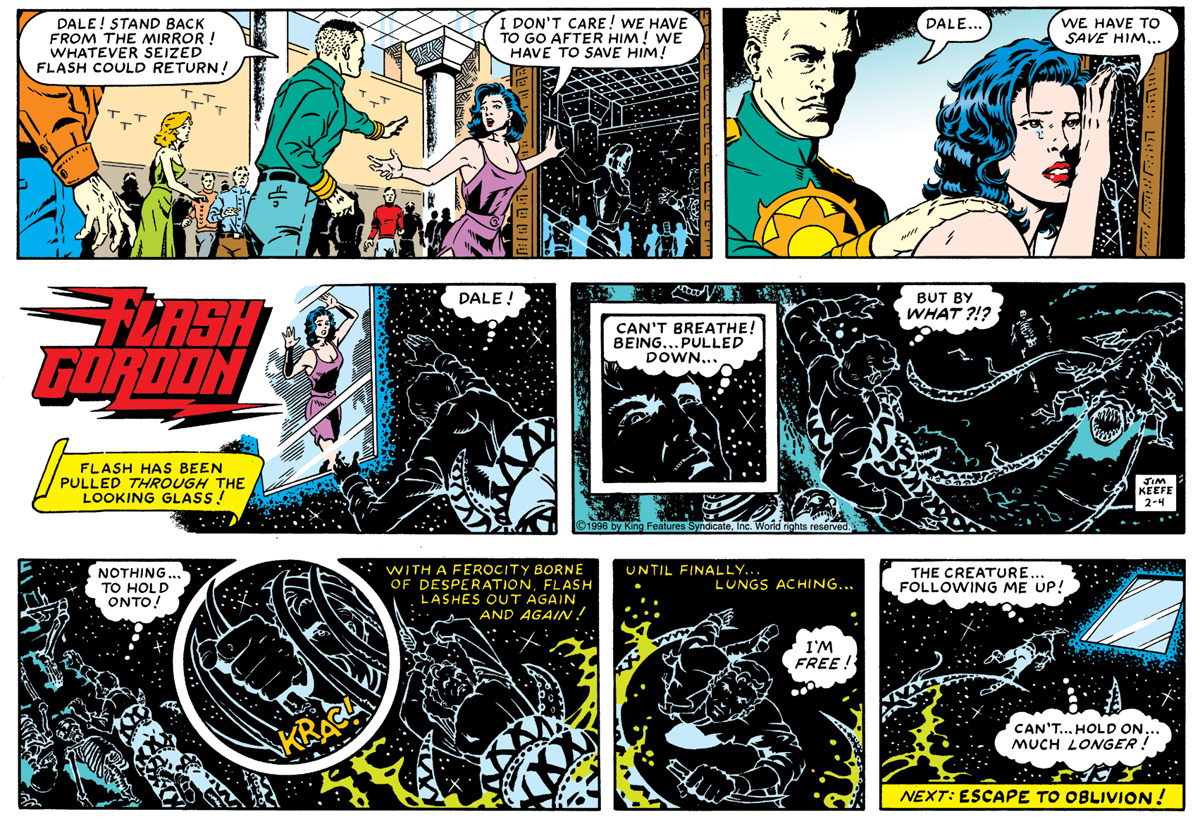 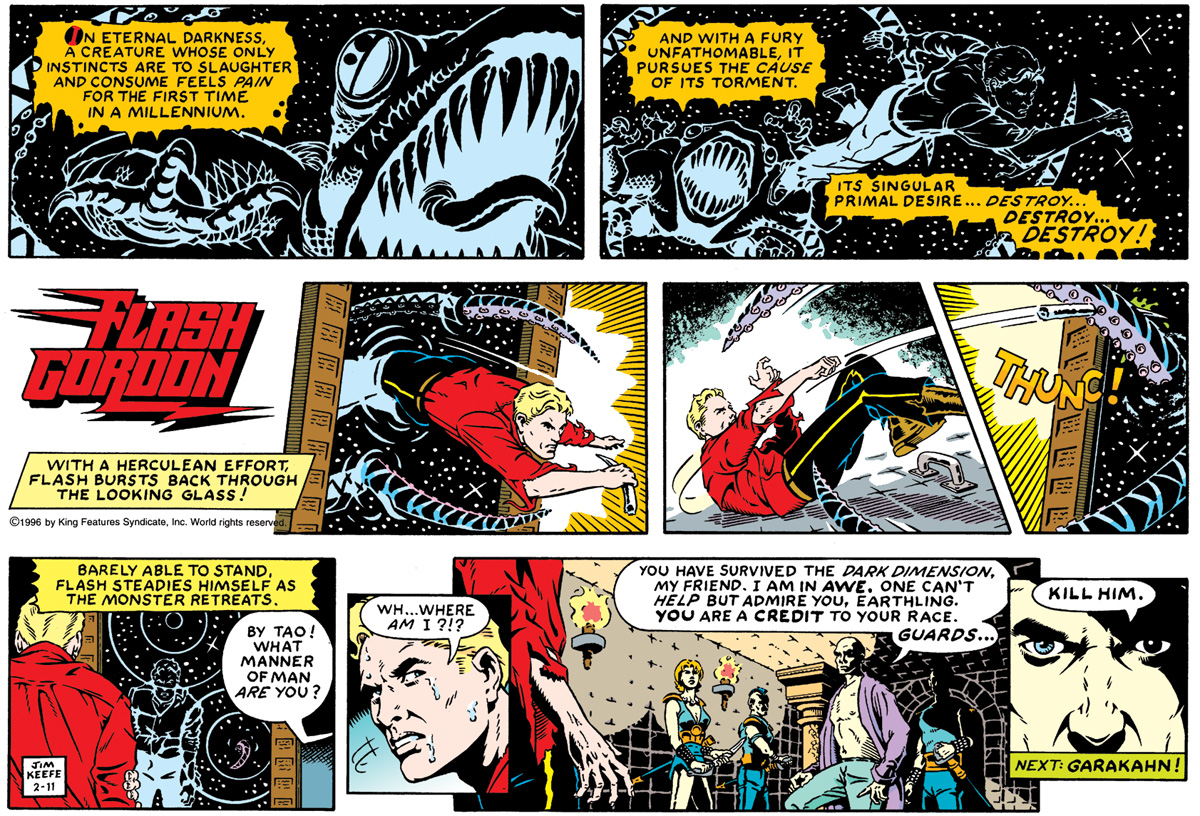 Behold, a few of Keefe’s early pages. He was definitely the right man for the job!

What challenges did you face when taking the job?

“The biggest challenge was the weekly deadline coupled with how incredibly labor intensive the work is. In comic books it’s pretty much the norm these days to have different labor divisions on a book – writer, penciller, inker, letterer and colorist. Working as the sole creator on a strip it’s all on you, which means a lot of hours at the drawing board.”

Did you feel like you needed to please the classic fans or were you comfortable delivering your own vision?

“My intent was to return Flash Gordon back to the basics and his classic cliffhanger roots – everything that made Alex Raymond’s strips from the 1930’s so iconic! Starting in the 1950s Flash Gordon morphed into a space adventurer on the comics page (which definitely suited the times), but that just wasn’t the ‘real’ Flash Gordon to me. My Flash Gordon stories went back to Flash, Dale and Dr. Zarkov stranded on the planet Mongo, with Ming the Merciless as their ultimate nemesis.”

“My favorite stories were ones that went in a different direction than I had intended – where characters literally took on a life of their own. But the most fun I had was anytime I could collaborate with other artists on the strip, which included fellow Joe Kubert school alum like Mark McMurray, Brian Bilter and Loston Wallace. I also got some iconic names in the field to lend their pencils as well. A quick rundown; Joe Kubert, John Romita, Al Williamson, Michael Gilbert and George Evans. I even did a page with Mutts creator Patrick McDonnell that King nixed for Flash Gordon, but let Patrick run as a Mutts Sunday page.” 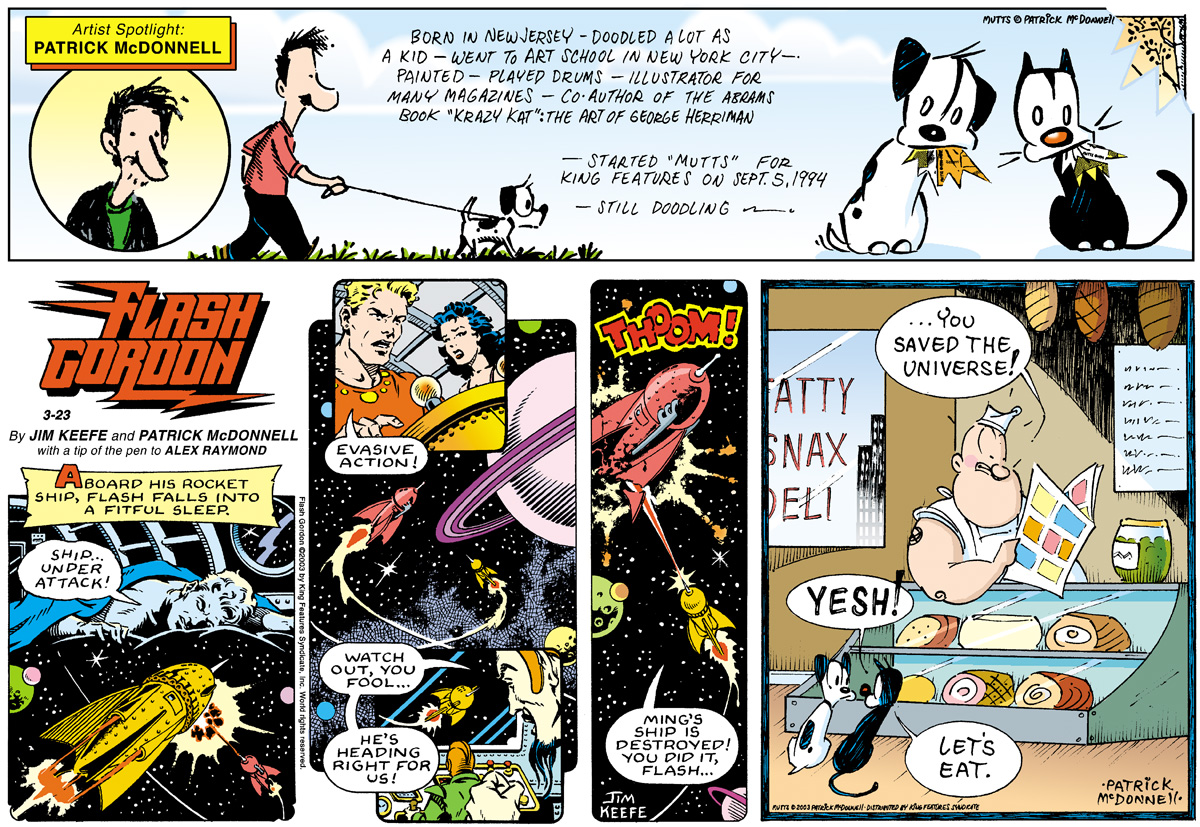 You think Flash is more of a dog or a cat person? Maybe both?

That’s quite a number of guests! Is there anyone you wish you had collaborated with that you didn’t get a chance to?

“I sent out a request to Alex Toth but he respectfully declined. In a brief message he went on to say that he considered Al Williamson Alex Raymond’s standard bearer. And for King Features to pass on Al Williamson taking the reigns on Flash was ‘A cardinal sin!!! He was born to it!!! Pity!!!’ He didn’t mince words.”

You currently do the art for Sally Forth. Gotta say I love it when you do Flash references in it (e.g. Sally Forth 06/16/19)! Is there anything that you learned from your experiences with Flash Gordon that you incorporate in SF?

“Simplify the art. Comics are published in print and online so small that the any detailed line work I put into the Flash Gordon strips ended up lost. For Sally Forth I work hard to create a drawing that gets the pertinent info across needed for the reader with an image that can survive the multiple formats that comic strip art is cut up and digested for.”

On a quick note, what do you think about Ted teaming up with Flash? What would they do?

“As shown in past Sally Forth strips, Ted doesn’t want to team up with Flash – his dream is to BE Flash! Along those lines; When I first applied for the job of drawing Sally Forth (back in 2012) one of the sample pages I did struck that same note. Thankfully Francesco and the editors at King liked it and we were off and running!”

THIS is how you apply for a job.

The 1980 Flash movie came out this month 40 years ago, becoming an instant cult classic. Do you have any fond memories of it? Did it inspire some of your art or stories?

“I loved the 1980s version for the title credits alone. That iconic Queen song over Alex Raymond artwork – classic! My favorite screen adaptation of Flash Gordon is the 1930s serials starting Buster Crabbe. Al Williamson actually recommended them to me back when I first got in contact with him in the late 1990s. He told me, ‘You want to get a good handle on the characters? Watch the Buster Crabbe serials!'”

Gotta say it was nice seeing a brand new strip from you for Flash Forward, even if it was a one-off. Did you miss penning the character?

“I definitely miss being the writer and artist on a strip. Whatever I wanted to draw – BAM! THAT would be what the story was about! What I don’t miss is the size limitations of today’s strips. You look back at the real estate artists had to work with back in the 1930s and 40s when adventure strips were first taking off – it’s awe inspiring!”

What other ideas would you have for the strip if you were to continue doing this job full time again?

“A half dozen ideas pop into my head just at the mention. But to echo what I was saying earlier, more importantly would be a focus on that classic cliff-hanger vibe. An adventure strip like Flash Gordon has to be fast-paced!”

Thanks again for your time with us, Jim! To close it off, what do you have going on in your professional life right now besides Sally Forth?
What can readers look forward to from you in the near future?

“Francesco and I were getting started on our first Sally Forth collection just before the pandemic hit. Once comic conventions start opening up again we’re hoping to have a collection available to fans right out of the gate. I also have a new sketchbook I’m working on – the focus being pen and ink illustrations. There’s a couple other projects in the works, but more on that we’re they’re closer to publication.”

You can read Keefe’s current strip Sally Forth by clicking on the link. Also, be sure to check out his contribution to Flash Forward! New comics are published every Sunday. Other contributing artists include David Reddick, Liniers, Pia Guerra, June Brigman, and many more.