AN INTERVIEW WITH JERRY SCOTT AND JIM BORGMAN

One of Comics Kingdom’s rockstar tag teams are here for an exclusive interview! Reuben Award winner Jerry Scott (who also co-created Baby Blues) is one of just four cartoonists in history to have two daily comics strips running in more than 1,000 newspapers each, while Jim Borgman is proudest to have won the National Cartoonists Society’s “Best Editorial Cartoonist” an unprecedented five times, the NCS’ prestigious Reuben Award for “Outstanding Cartoonist of the Year” in 1993, among other prestigious awards. Together, they have created one of the most beloved and hip comics in the kingdom!

Zits has been around since 1997, and since then it has captured the essence and spirit (for better or worse) of what it means to be a teenager. The strip follows 16-year old Jeremy Duncan, an intelligent and kind yet moody aspiring musician just getting through high school life and surviving his “uncool” parents. It appears in more than 1,600 newspapers worldwide in 45 countries and is translated into 15 different languages. With an estimated 200 million readers, it’s no wonder the strip isn’t showing any signs of slowing down!

We recently got together with Jim and Jerry to uncover some insider secrets behind the strip, like who Jeremy is based on and how they maintain that writing partnership for over 20 years! Continue reading below for our exclusive one-on-one (or is it technically one-on-two?) with these fine gentlemen.

Zits came out years after Baby Blues, which Jerry still works on. What inspired the idea of going from children to teenagers for this comic? How do you balance your creativity between the two?

JERRY: The inspiration had a lot to do with survival. And wine. And some pure luck.

I’ve partitioned my brain like a hard drive, so I just click on the strip partition that’s closest to deadline.

Is Jeremy based on anyone in particular? Don’t worry, we promise not to tell them.

JIM: Jeremy is about 85% Jerry, 53% Jim, 17% our various teenage kids, 13% their friends, and 84% thin air. The only thing I can trace back to a specific person is that Jeremy sits on a chair the way my friend Wayne did when he was fifteen, and Dad’s hair is drawn from my image in the mirror.

Are Jeremy’s adventures based on your own experiences as parents or teenagers? Which experience in particular stands out that you’re the most proud of or embarrassed to have written about?

JIM: It’s pretty rare for the strip to spring directly from life anymore — the characters live in the ether. But we may be the only parents in America who can honestly say that when our teenagers were growing up they contributed often, generously and without being asked to the family business. That is all we are at liberty to say.

JERRY: I fear we’ve said too much already.

While a lot of the jokes are timeless, there’s a lot of modern day pop culture references and niche situations that people living in 2020 can deeply relate to. How do you manage to keep the comic fresh and up-to-date in a way that today’s youth can understand?

JIM: I’m not sure “today’s youth” would buy anything we’re selling. With some luck, their parents and grandparents will sense hipness in the references, so the beanbag doesn’t have to actually go into the hole. We don’t have to be more culturally relevant than Taylor Swift, just Beetle Bailey.

JERRY: Drawing from everyday experiences is about all the pop culture research I do, and choosing the specific over the general seems to work most of the time. Honest feelings and speaking truth resonates with intelligent folks. It’s interesting how broadly understood most of the “niche situations” can be. Our readers are cool.

Is there any chance that we might see what Jeremy’s future looks like someday, even as a quick flashforward story arc? Do you know what his life chronologically looks like five or ten years from now? His college days would certainly be a sight to behold.

JIM: Would you really want that, to learn that Jeremy is the account manager at the local branch of your title insurance company? Zits is about a teenager, and by its nature our teenage years are full of peril and possibility. Like most teenagers, we are far too occupied with the present to create timelines.

JERRY: Yeah. That sounds way, too. Such like homework.

What can readers expect from you guys in the near future? Anything in the works that we should look forward to?

JERRY: There’ll be another strip on Monday.

Zits has been around for over 20 years now and you two have been the core team behind it since day 1. How have you managed to maintain that team chemistry all these years, and what advice do you have for business partners or writers to achieve a long-term working relationship?

JIM: Okay, I’m dialing down the snark knob for this one. I think our partnership is pretty remarkable. Jerry and I each have the attitude that we will gladly do two-thirds of the work. We’ve lifted each other during the rough times that life brings. We live by the Golden Rule of Improvisation, which means that when one of us has an idea, the other says “Yes, and…” We’ve always appreciated each other’s strengths and readily compliment each other’s work. In the end, a cartoonist is usually working for an audience of one, and we are each other’s one. If I can make Jerry laugh, I’ve had a good day.

JERRY: Totally agree. The gods smiled on us from Day One. 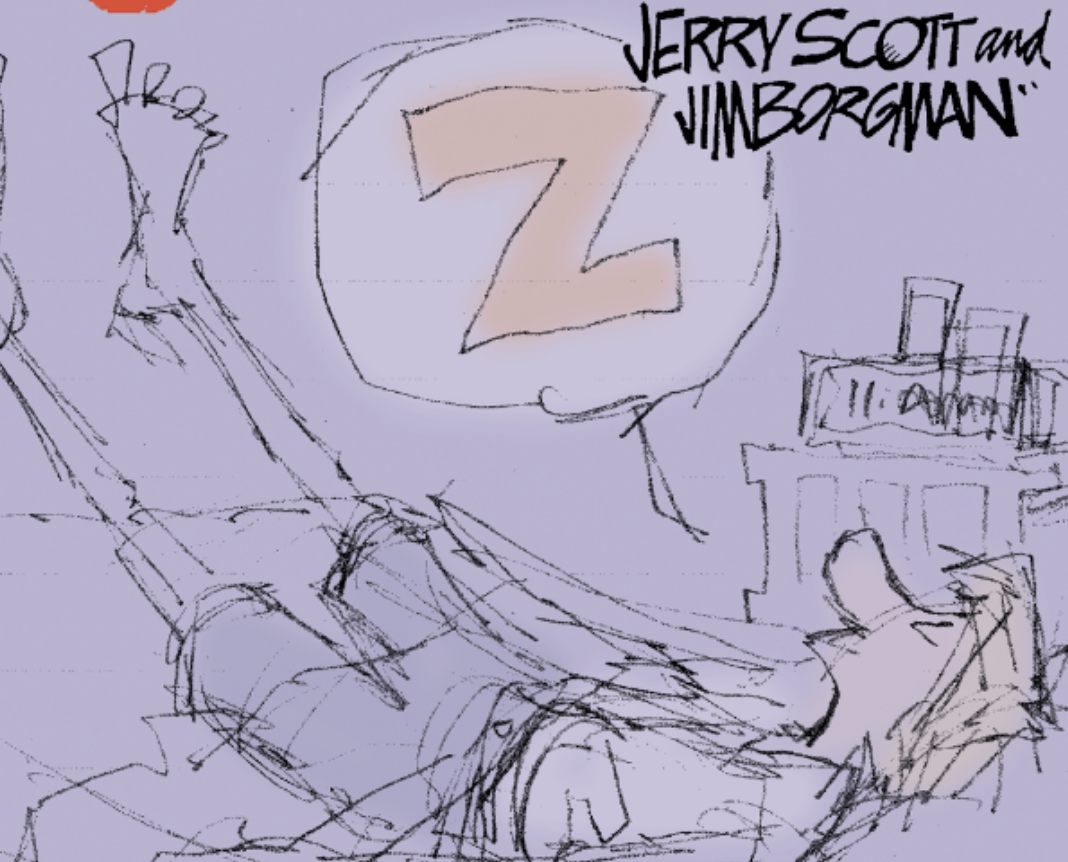