Snuffy Smith Is On The Comics Kingdom YouTube Channel! 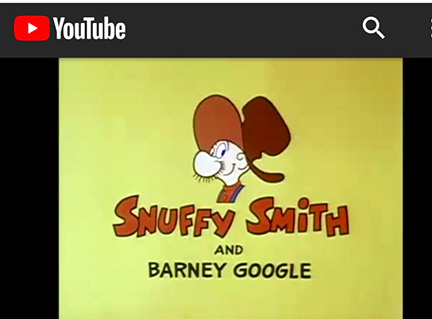 One way I enjoy my free time at home is catching up on animated cartoons from my childhood. And yes, one of these cartoons is Snuffy Smith! Long before I ever knew I would be the cartoonist for the Barney Google And Snuffy Smith comic strip one day, not only did I read the comic strip in the newspaper, but I watched the animated cartoons on television, too. In the 1960s, King Features Syndicate released 50 six-minute Snuffy Smith cartoons for television, produced by Paramount Cartoon Studios.  Lately, I have been rewatching many of those cartoons on the Comics Kingdom YouTube Channel! Each one opens with this fun, catchy theme song sung by Snuffy himself:

The great voice artist, Paul Frees, stars in this series as the voice of Snuffy Smith and Barney Google, too.  My favorite episode I’ve seen lately is It’s Better To Give, which is a short animated Christmas cartoon.

There are lots of other fun animated cartoons on the Comics Kingdom YouTube Channel.  Some of those include Beetle Bailey, Krazy Kat, Defenders Of The Earth, The Adventures Of Flash Gordon, The Legend Of Prince Valiant, The Phantom and more!  And it’s free to watch and free to subscribe! Check it out!