AN INTERVIEW WITH AN ULTERIOR MOTIVATIONAL SPEAKER (MONDAY MOCK NEWS) 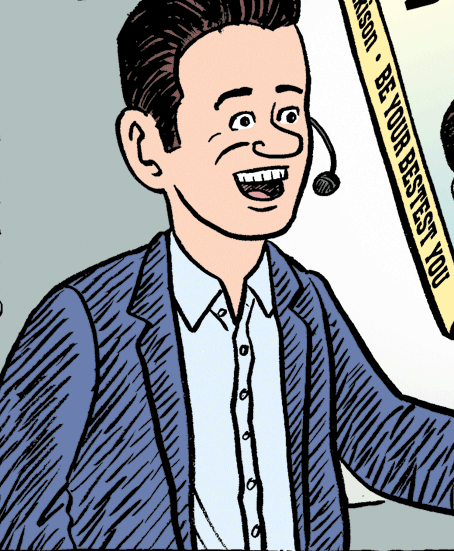 Today we had the pleasure of interviewing self-proclaimed motivational speaker Hal Hankison, who is promoting his new book Be The Bestest You. It is out now in stores everywhere (or somewhere) and you can catch him touring the country to your nearest bookstore, so keep an eye out for him if you want a signed copy! Hankison has had success speaking in college campuses and in all sorts of seminars here in New York. Even though we’ve never heard of him, we were nonetheless excited that we got to speak with someone (who claims to be) so influential!

CK: Thanks for joining us, Hal! What bring you here today?

Hankison: Why thank you very much! I just released my new book Be The Bestest You, which is in stores now as well as online for only $39.99 and if you catch me touring, you can purchase a signed copy. Alternatively, you can buy a signed copy online for only $20 more! It’s a fantastic book and it will truly help you be the bestest you that you could ever possibly imagine. So yes I wanted to talk about this magnificent book which my mother gives a perfect rating in the hopes that your readers would be interested!

Tell us a little bit about yourself? I don’t think I’ve ever heard of you before.

Well I am a former sales rep. who found his calling in life by speaking about motivation, which makes me a motivational speaker. I have spoken all over New York City! You’ve no doubt heard my talks in the subways as well as on the steps of Wall Street and right on the corner of 5th Avenue and 57th. I am just a humble man with a humble life. I also consider myself a true people-person.

So what can you tell us about this book? Is this your first book? Because I really don’t think I’ve ever heard of you before.

My new book titled Be The Bestest You, which is available now everywhere for only $39.99, features detailed strategies for how you can succeed in life and how to become the best version of yourself in a short amount of time. For only $39.99, you can pick this up and it’ll basically be like having me and my speaking routines in your living room except you’re not being annoyed by pesky crowds. By the time you’re done with the book, you’ll be a whole new you looking forward to more of my future works!

You’re saying you have another book on the way?

That’s right! And I’m here to exclusively announce that the sequel, Be The Bestest You 2: A Better You, will be available everywhere next year for only $44.99! It picks up right after the end of the first one. You do not want to miss out on that one because it is essential to becoming an even better you that you learned by the end of the first book! In fact, it even continues from a small cliffhanger that I left in the first book!

Why would you make a sequel book if you don’t truly become the “bestest you” by the end of the first one?

You’ll just have to read the books to find out! And they are only $39.99 and $44.99 respectively. The sequel is already available to pre-order!

So uh…What is it that you used to do before you became a speaker and author?

A sales rep. Why do you ask?