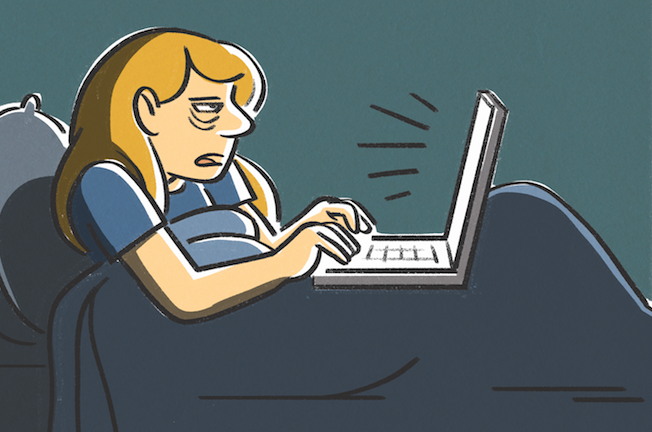 In a currently developing story, local woman known only as M. Patrinos has decided to leave a house party she was attending just to go home and browse YouTube videos. “We’re really happy for her,” said an oblivious guest at the party. “We know she’s working hard on school stuff and on her cartooning career, so we totally understand her wanting to go be responsible. We’re really proud you, boo!”

Our anonymous source informs us that, while Patrinos needed to do some “adulting,” she instead chose to do some social media and YouTube browsing. She’s apparently obsessed with cat videos and Star Wars expanded universe lore videos. “Not so much the new Disney canon, but the old one before the Disney buyout,” informs our source. “Oh and of course we can’t forget about those WatchMojo top ten list videos.” It is now currently 3:09am and Patrinos shows no sign of slowing down to catch some sleep. We’ll keep you updated as further developments take place.

UPDATE: It is now 7:05am. Patrinos’ eyes have turned red as she watches a video of Nicolas Cage singing ‘Purple Rain’ in a karaoke bar. She can also be seen chugging down on energy drinks.

UPDATE: Patrinos fell asleep on top of her laptop while it played a ‘Top Ten Anime Betrayals’ video at 8:35am. It has also just been revealed to us that our anonymous source was none other than the guest we initially interviewed at the party. She just stepped out for an interview. “I knew you were gonna ditch us, girl! You’re gonna have some explaining to do later!”