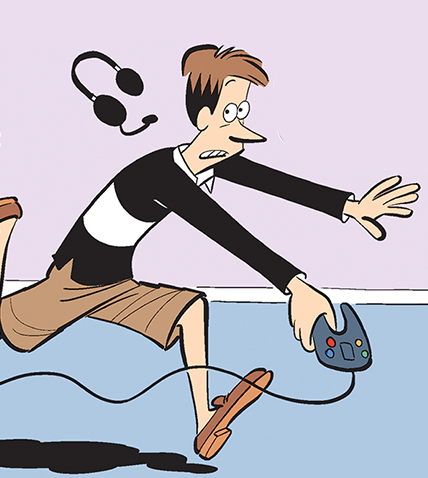 Local dad Ed Kudlick entered a fit of rage when his son, Dustin Kudlick, would continuously refuse to get off his video games. After several failed attempts to get on the TV, Kudlick Sr. proceeded to yell at Kudlick Jr, which was then followed by a cat-and-mouse chase all over their house. Concerned neighbors reported the incident, which has now apparently been taken care of.

“It was my day off and I just really wanted to play video games,” said Kudlick Jr. “I mean, I know I got fired from my last job yesterday but I never get to have time with my games! Every other day I’m just sitting in the couch watching TV. It was just time for a change of pace, but my dad wouldn’t listen, and instead chose to chase me around like a maniac! Oh by the way, are you guys hiring right now? Like, maybe for an office position? Preferably tucked away in a back corner?” Kudlick Sr. gave a short but brief comment: “These video games are a menace to society! If they make our youth violent, imagine what they can do to people when they grow up to be adults!”