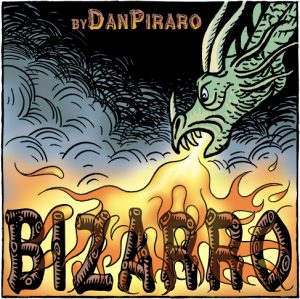 ATTENTION: I’ve been on vacation for a week and so this post has TWO WEEKS of cartoons!

(To embiggenate the scene below, click either horse’s ass.) 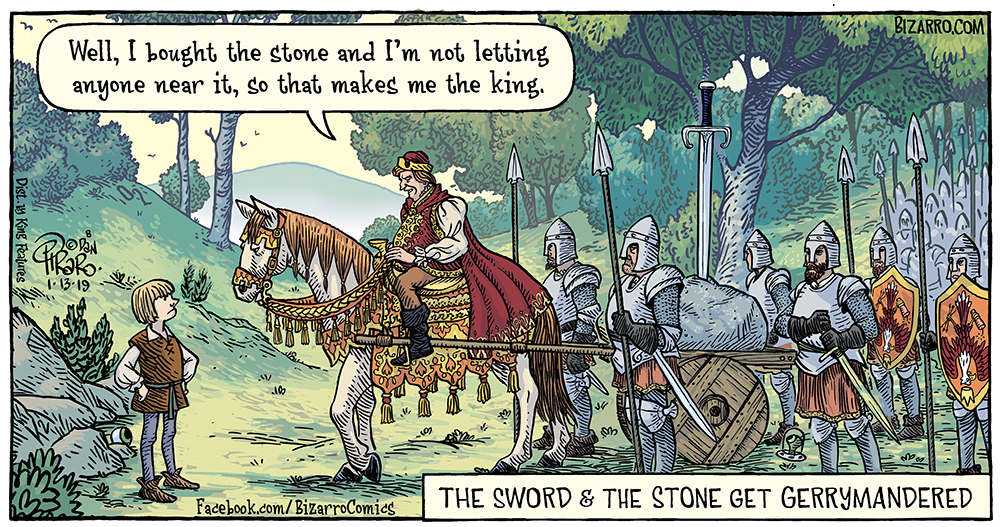 Bizarro is brought to you today by The New Style.

My beloved Olive Oyl and I, as well as my eldest daughter, Krapuzar, spent the past week in Oaxaca, Mexico and had a terrific time. Mexico is teeming with artists and artisans of all kinds and as Mexican cities go, Oaxaca is one of the most saturated with creativity. In my travels here thus far, I’ve never experienced an environment more creatively inspiring. I’m really looking forward to finding out how this latest trip influences my non-cartoon art in the weeks and months ahead.

The cartoon above is a loose interpretation of gerrymandering. I’m aware that this isn’t literally how gerrymandering works, but if you think of the stone from the tales of King Arthur as an election, and since it has been stolen and is now guarded by local authorities, the deserving recipient of the crown (young Arthur) has no way of attaining it. It’s no different than what the GOP has done (and continues to do) all over the U.S. with gerrymandering and voter suppression. Not to mention the help the Orange Menace enlisted from Russia. (Any resemblance between the horse’s ass on the horse and currently living, thieving horse’s asses is entirely intentional.)

After you’ve successfully found the 8 Secret Symbols in that cartoon, move on and see what Wayno cooked up in his Cartoon Easy-Bake Oven for that week…

I’ve personally never smelled anything worse than cat urine and I’ve been to a public restroom in New Jersey. (To be fair, it may have been a no-cats-allowed restroom.) 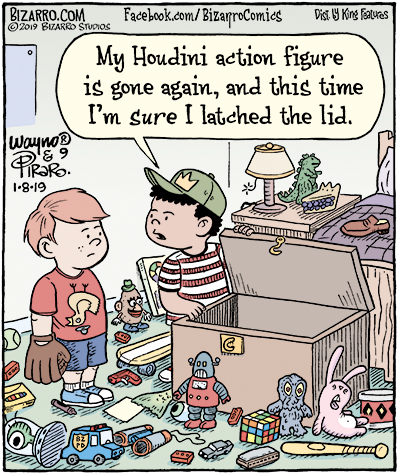 Can anyone tell me what connection this cartoon has to the 1978 movie, Halloween? 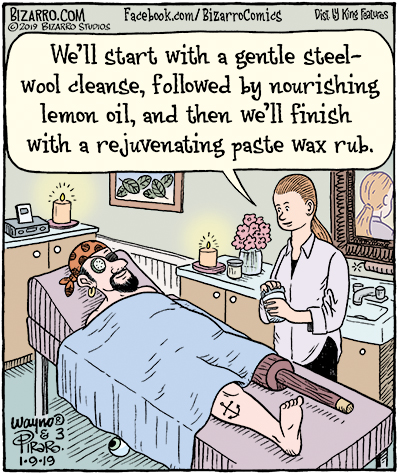 For me, the cucumber slice makes this cartoon. I lobbied for Wayno to remove the patch from the other eye and put a carrot stick in the empty socket but he demurred. Probably for the best. 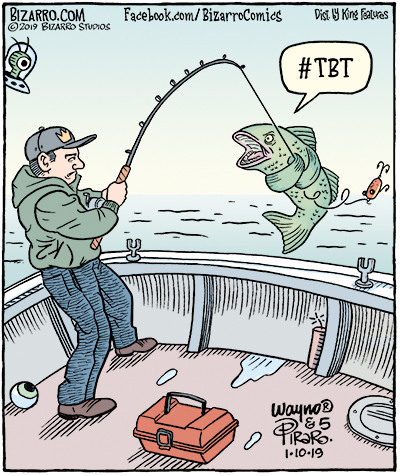 This fish makes it look easy, but try pronouncing the letter “B” without flexible lips sometime. 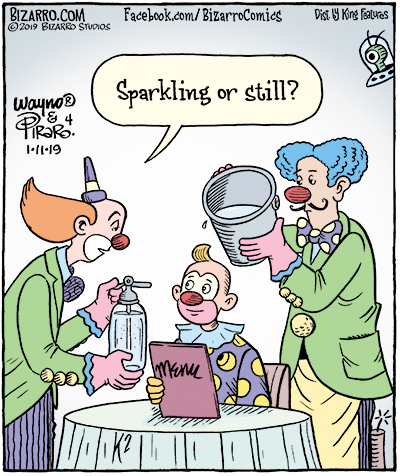 I’m sure I don’t have to tell you what the dessert cart is like in this restaurant. 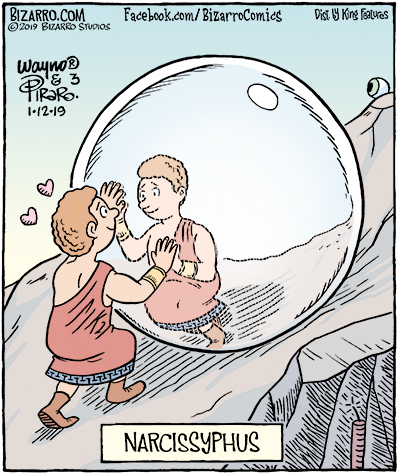 Don’t be too critical of the way Wayno drew this one: handprints on shiny surfaces are really hard to draw in cartoon style.

AND NOW, AS PROMISED, PART TWO OF THIS DOUBLE-WIDE BLOG POST! READ ON, JAZZ PICKLES… 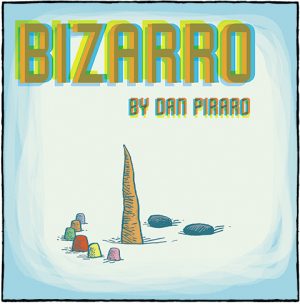 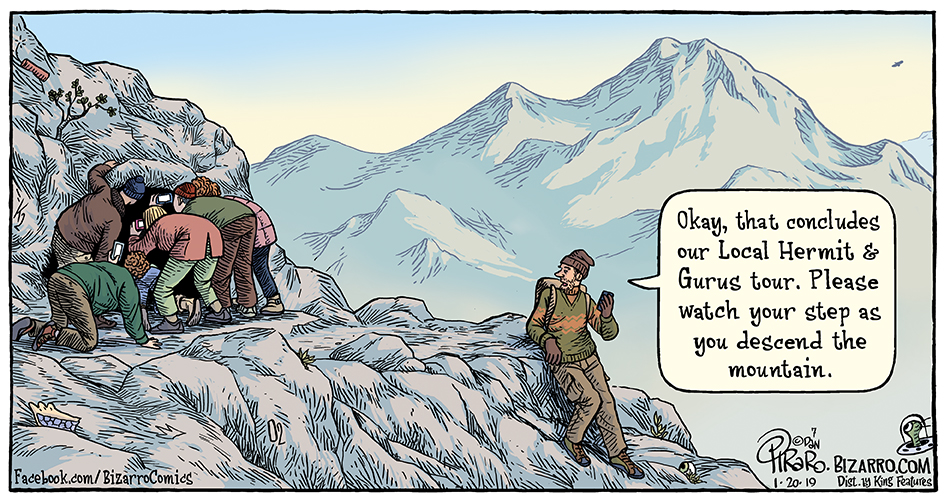 A while back, Olive Oyl and I went on a walking tour of some selected street food vendors in Guanajuato (city), Mexico. Tourists are routinely warned against eating street food in foreign countries so we were a little anxious, but it had been organized by a Gringo who had lived there for years and knew what he was doing so we signed on. It turned out to be really fun and delicious and without biological consequences of any sort. There are lots of these kinds of “experiences” available on the Interwebs these days and although we didn’t bother anyone who hadn’t agreed to be on that tour, it was the inspiration for this cartoon.

On a related note, while visiting Oaxaca (city) last week, we traveled to a few small towns in the mountains outside the city to buy some artisanal goods from the locals who make them. While in Teotitlan de Valle, a town famous for their hand-woven rugs, we found that we’d miscalculated and missed the public market, so the streets were deserted and even restaurants were closed. We asked a friendly local woman where we might be able to find lunch and she directed us to an address a few blocks away. Upon arrival, we were welcomed into a family’s home where a couple of young women cooked lunch for us while we sat in an adjacent room watching. A little boy played on the floor nearby and we soon found out his name was also Daniel, which makes us what they call in Mexico, “tocayos”. (A person with the same name.) His father was very friendly, too, and offered me a sip of something called crema de mezcal. Regular, liquid mezcal is something I enjoy regularly but I’d never even seen the “creamy” version. (Can’t say I cared much for it as it reminded me a bit of shampoo with alcohol in it.) We had a lovely time and a delicious meal and it cost us only a couple bucks each. We love this about Mexico.

For some fun photos from our week in Oaxaca, check out my Diego Piraro fine art Instagram feed.

On that happy note, let’s see what was on Wayno’s cartoon tour last week… 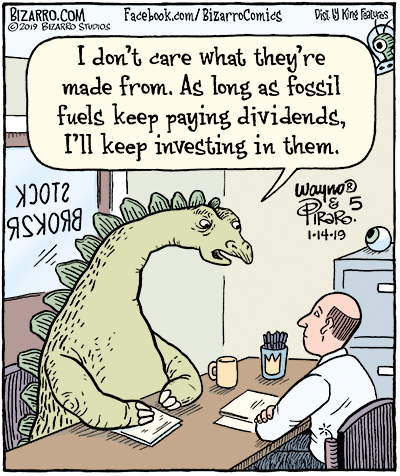 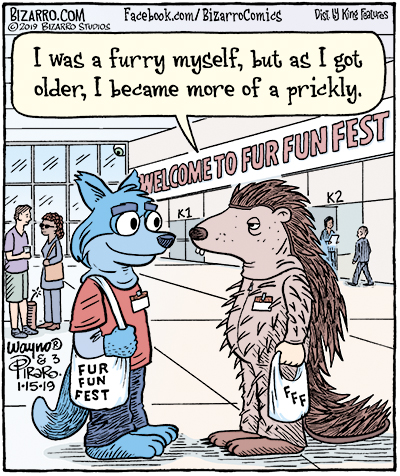 On a crowded subway car, would you rather be standing next to a furry or a prickly? Next week’s cartoons will feature a mannequin who is wearing a human arm while her’s is in the shop. 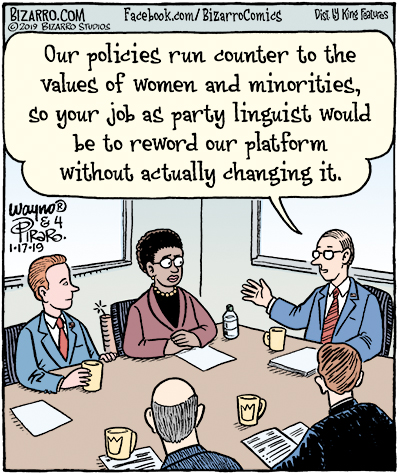 I think we all know what this cartoon is referring to in the real world but let’s not talk about it. #WakeUpAndSmellTheBigotry&Sexism 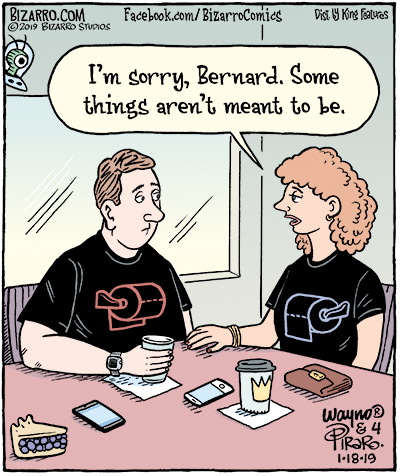 It could’ve been worse. His shirt could be completely blank. 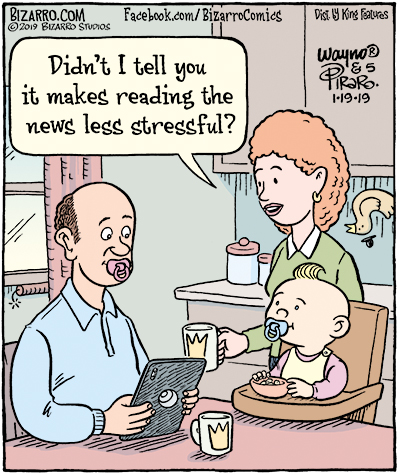 That’s the whole dang deal this week, Jazz Pickles. Thanks for shuffling along with us for another week. I hope your world is brighter and more peaceful than it was last week and that the trend continues.

January is an excellent time to reach out and say “I enjoyed your cartoons online for free all last year, here’s a few bucks!” and the links below to our Tip Jar, shop, prints, etc., are all great ways to do that!

DIEGO PIRARO FINE ART…where you can buy my paintings or prints of them, which look nothing like my cartoons!