When the Sunday page above was published, the Army was in the process of closing military camps around the country. After the Cold War ended, Base Realignment and Closure (BRAC) was a congressionally authorized program in which the federal government began consolidating and reorganizing its operations to improve the efficiency of the Department of Defense.  In five rounds, beginning in 1988 and continuing in 1991, 1993, 1995 and 2005, 350 installations were shut down.

Camp Swampy was inspired by Camp Crowder in Missouri, where Mort Walker did his basic training in World War II.  It was deactivated after the war but was temporarily reopened as Fort Crowder in the 1950s.

This postcard shows scenes from the original WWII era camp.

In 1964, Crowder College took over the remaining buildings of the former military base.  It grew from 378 students and currently has an enrollment of over 5000.

On April 12, 2018, Crowder College paid tribute to Mort Walker in a special celebration.  Here is the cartoon Mort drew in advance for that event. 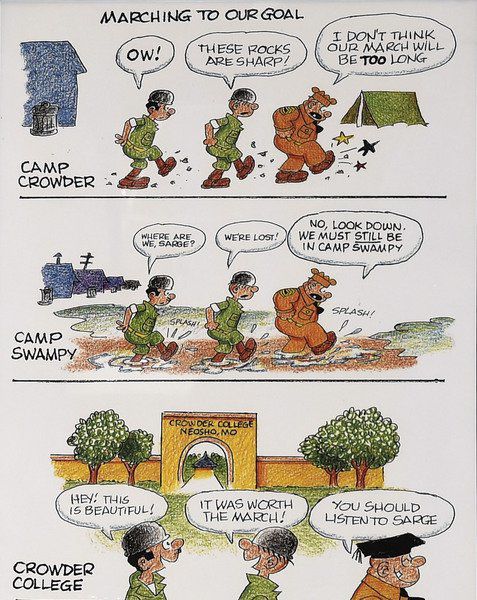 Click the link below to see a video of the Crowder College tribute.

Somehow Camp Swampy has survived all of these changes.

Next week we will showcase another Sunday page from 2002 in our Timeline series so be sure to check back.