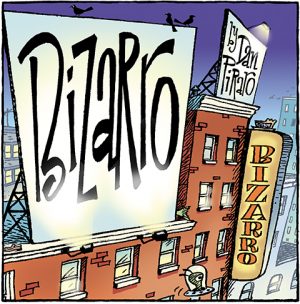 (To test the embiggenation capabilities of this cartoon, click one of the windows in the garage door.) 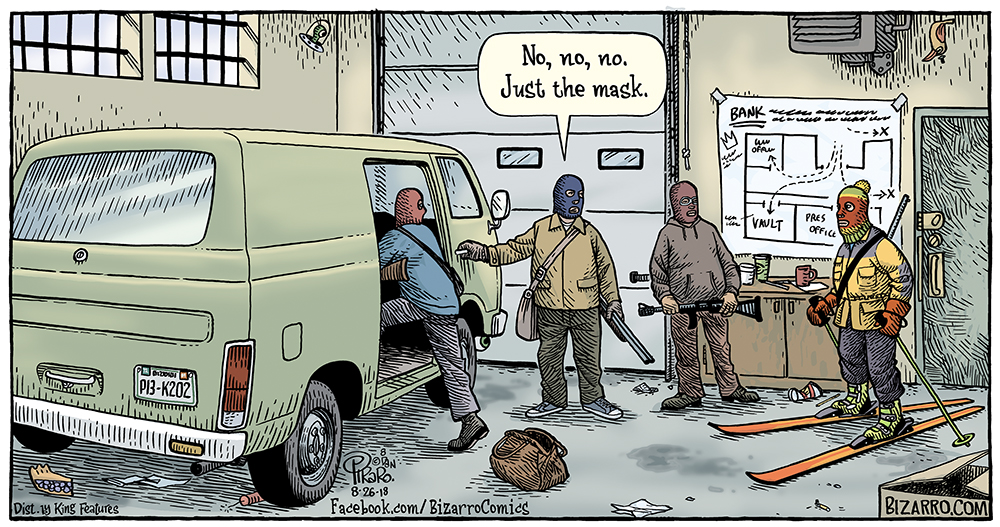 Bizarro is brought to you today by Banks.

I love stupid criminals. If I loved stupid politicians half as much, I wouldn’t be able to stop laughing right now. Instead, I left the U.S. and moved to Mexico so that I would not be trapped on the wrong side of “The Wall” when the Apricot Satan declares martial law after an election his Russian friends weren’t able to finagle for him. (When that happens, remember you heard it here first. Unless you’ve already heard it elsewhere.)

On more pleasant topics than the substitution of democracy with authoritarianism, I’m going to do a bit of stand-up comedy for a charity event in the U.S. in a few weeks. The event is taking place in a community just outside of Tulsa, Oklahoma, so if you’re in the area, please give some money to a good cause and come hang out with Olive Oyl and me for an evening. Since the show is in Oklahoma, I’ll be reducing my chances of getting shot by a propaganda-intoxicated hillbilly by not doing any political comedy. There are much funnier things to talk about than those who do not know history being bitten on the ass by it, anyway. For more information and tickets, go to this Internet place.

Welp, the 70s clock radio in my trailer home just went off which means it’s time to check in on what Wayno was doing this week… 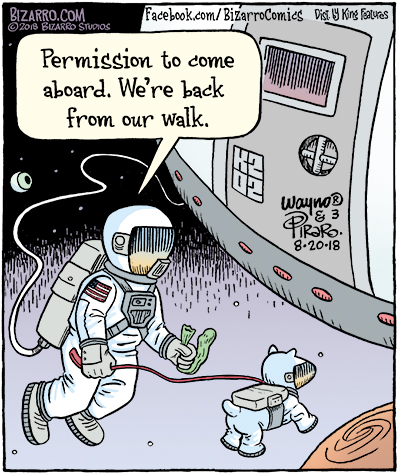 If he pees on a passing satellite it could knock out the Internet for the entire East Coast, which maybe wouldn’t be such a bad thing. One online reader this week commented that the dog doesn’t have an exit hole in his space suit. I told him he was incorrectly assuming the contents of the green bag had once belonged to the dog. We’ll have to ask Wayno to be certain, but it is one plausible explanation. 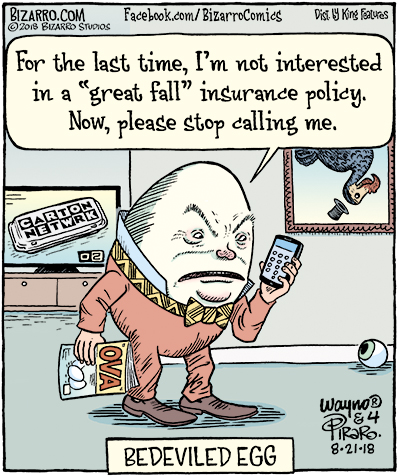 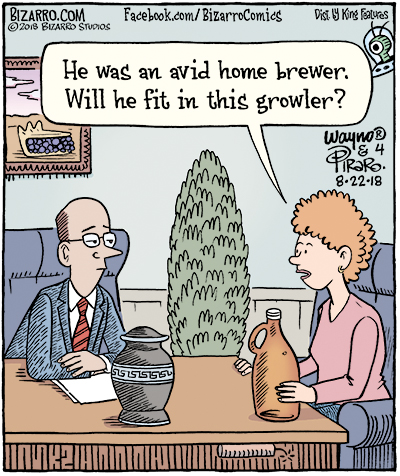 Pro tip: You can tell if a funeral home is reputable by whether or not they have a somber picture of pie on the wall. 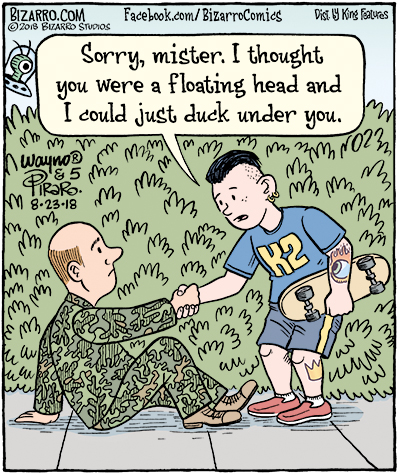 The dangers of camouflage are many. (“My legs are gone!—Oh, wait. Nevermind.”) 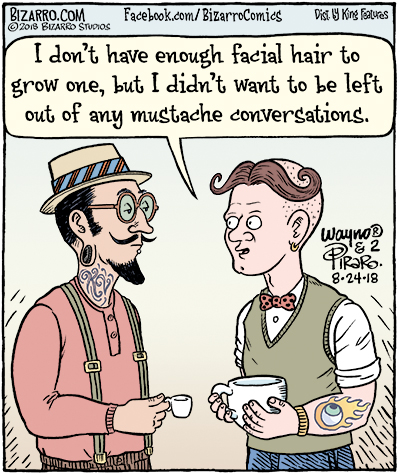 Some people will think Wayno has drawn me again (on the left) but I don’t have a neck tattoo or wear suspenders or an Oreo in my ear or drink from tiny cups and my glasses are not that big. I do wish one of my friends would grow a forehead mustache, though. If anyone already has one, please send a pic. 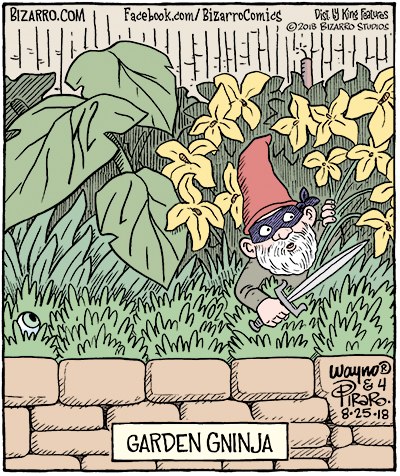 You can’t say this gnever happens because gninjas are so good at gnot being seen. I do wonder what he’s up to and what he’s gnoing to do with that gknife, though.

That’s the straight poop this week, Jazz Pickles. I hope you’re comfortable, well-fed, and enjoying life. Please drop by our shop and snag a trinket or two for yourself, a friend, a relative, or an enemy. The shop and the Tip Jar help keep the campfire burning at Rancho Bizarro. Here’s a pic of our entire line of enamel pins, which you can buy individually or as a set. 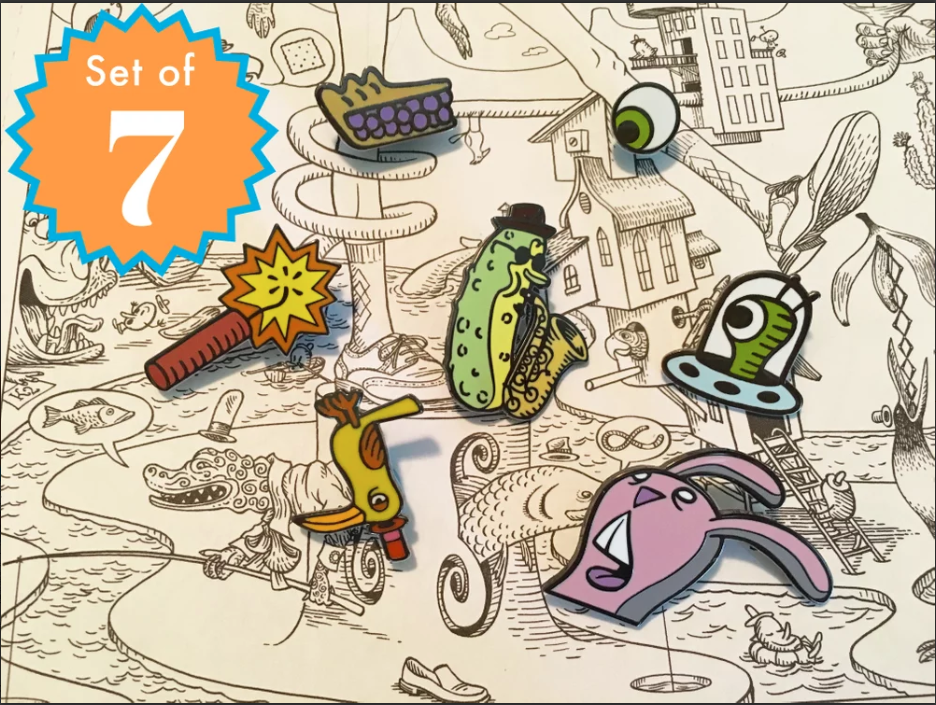 Don’t forget to check out Wayno’s blog this week. He includes a report from a charity event he recently worked where his band played and a young, aspiring cartoonist did a portrait of him. So cool!