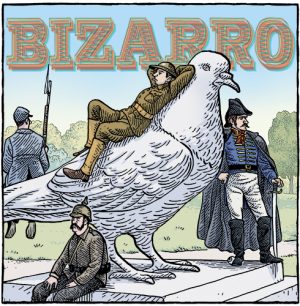 (For a more embiggenated view, click the executioner’s buttock.)

Bizarro is brought to you today by The Fumes Issue.

The inspiration for today’s cartoon came from my longtime friend and cartooning colleague, Jim Horwitz. You can see his daily cartoon, Watson on his FB page here. And here is a pic of Jim with Wayno and me. We’re all dressed up because we were attending a funeral. We’re laughing because it was the funeral of an enemy.

In a world where virtually everyone depends on Internet ratings, the executioner above is wisely trying to improve his skills by asking customers to rate his performance. I often get the most benefit from reading the negative reviews so I’ve pulled a few from this gentleman’s page to share with you:

“This was the worst day of my life and not because I was being executed. First, the slots on the guillotine that the blade slides down were so dirty it kept getting stuck halfway down. When he did finally manage to push it all the way down it was so dull that it just bruised my neck instead of cutting it. Eventually, he gave up and went to find some WD40 so I just left. I had a crick in my neck for days and will not be using his services in the future!”

“I’d been waiting to be executed for months and was happy to finally be getting it over with but this was not at all what I expected. The “executioner” (if you can call him that) came to get me in my cell and began leading me through the various dark corridors of the dungeon but got completely lost and couldn’t find his way out. Him and me and the priest walked around for what seemed like an hour but never saw the light of day. At one point I even asked the priest if he could pray for us to find a way out but he just rolled his eyes and huffed. In the end we decided to split up and agreed that if any of us made our way out we’d send help back for the others. What a waste of time.”

“I was about to get executed and this idiot in a hood puts a filthy pencil in my mouth and asks for a positive review. How many people have had that pencil in their mouth before? Disgusting. At the bottom of the basket where the comment card was, there was also a dead cockroach. I complained and he didn’t even acknowledge it.”

I hope some of these reviews have been helpful. Now let’s look at how Wayno spent his week…

For me, Ahab’s line really makes this joke. Just perfect. I can’t help imagining a later scene when Ahab returns to try to pick Moby Dick out of a lineup of whales and Mr. Dick is complaining because he’s the only white dude in the lineup. 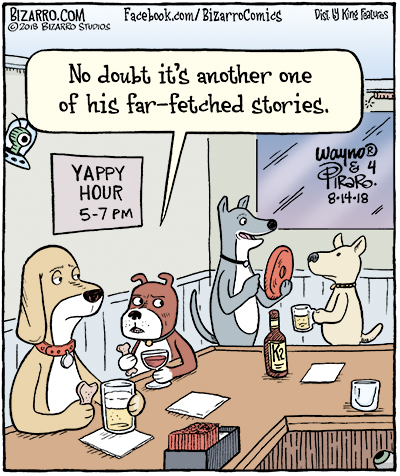 I have two dogs that I adopted when they were older and they both lie habitually. One claims to have sniffed the crotches of three academy award winners and a former president. The other swears he used to be a drug-sniffing dog and was part of the team that arrested El Chapo. Yeah, right. 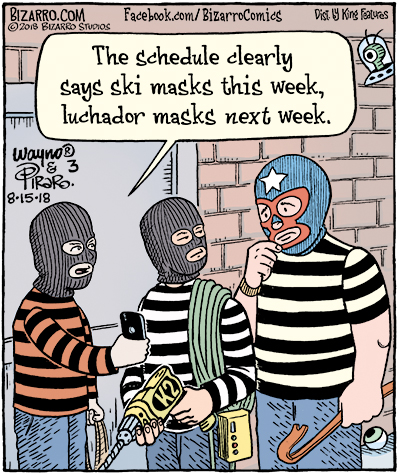 I suspect I may have inspired Wayno to write this gag not because I rob banks but because I’m doing a series of surreal luchador paintings for my art show in Mexico in October. See them on my fine art Instagram page: @diegopiraro

Very soon, we’ll be adding to our Bizarro Store an enamel pin of a luchador playing guitar. It will be almost as much fun as our Jazz Pickle and Hello Shitty pins. For an in-depth look at all of our products go there now and peruse! 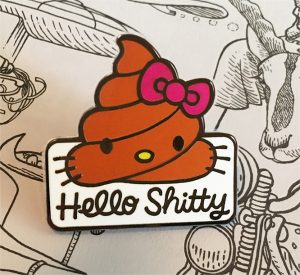 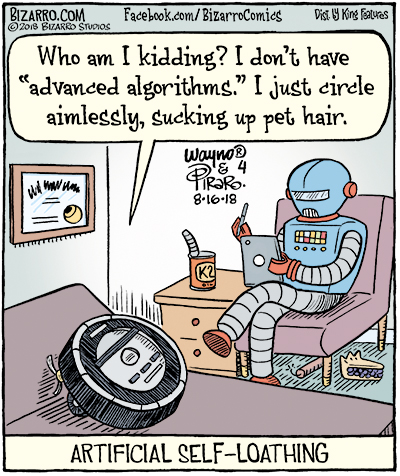 I understand why some people are afraid of artificial intelligence, but I got used to it years ago because I grew up in Oklahoma. (If you’re an Oklahoman and you’re a fan of my cartoons, I’m not talking about you. It’s those other people. You know who I’m talking about.)

Our research team is still looking into it, but we believe this is the first syndicated newspaper comic ever published on the subject of illicit pussy licking. Congrats, Wayno! 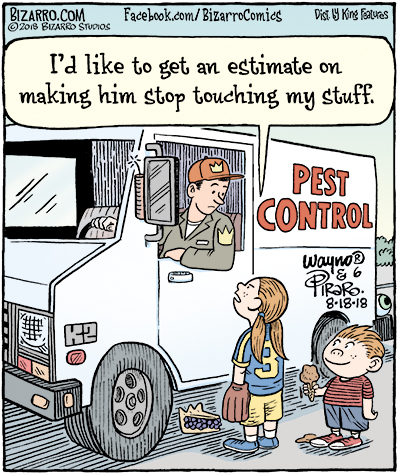 My favorite thing about this cartoon is Wayno’s nod to the fact that pest control trucks always have the best chocolate ice cream cones. I recommend skipping the DDT sprinkles, however.

That’s the funtown rundown of this week’s cartoons, Jazz Pickles. Thanks for keeping us company. If you enjoy what we do, please consider supporting us with a visit to the Tip Jar or the Bizarro Shop. And by all means, don’t miss Wayno’s weekly commentary on this batch of cartoons. This week, he’s also included a video from his quirky band, the always delicious, Red Beans & Rice Combo. Try listening with some Tabasco sauce.