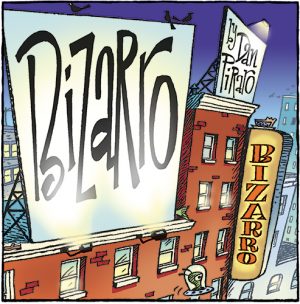 (To begin the embiggenation process, click any graffiti containing a vowel.) 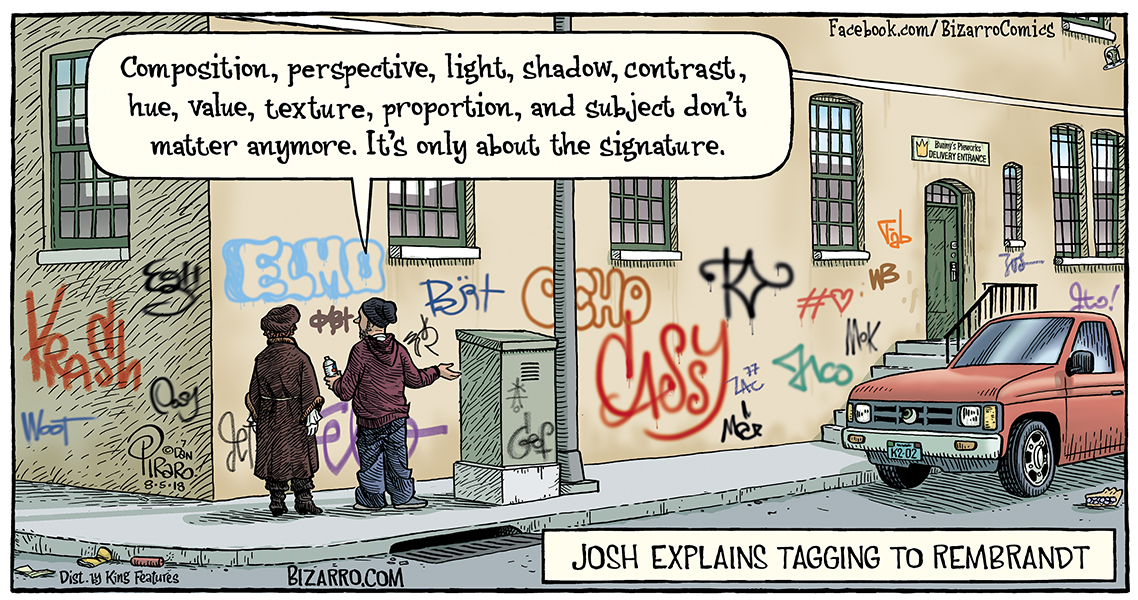 Bizarro is brought to you today by Russian Exchange Program.

In the art world, there’s an ongoing debate about whether “tagging” is art or vandalism. To be clear, tagging is not graffiti or mural painting, it is simply signing your name with paint. For me, if hypothetically applied to any other art form, the question becomes more clear.

If somebody was standing on the corner of your street blowing two notes badly on a saxophone for days on end, would you call it music? If a person put their name on the front of a book but all of the pages were blank, would you call it a novel? If someone stood on a street corner doing nothing other than taking bows and nodding at passers-by, would you call them an actor?

If someone is over fifty and writes the above paragraph on his blog, would you call him a cranky old bastard? Possibly, and you might be right.

If you’re like me, you may be wondering what the hell my partner, Wayno did this week in that cave full of art supplies that I keep him confined in. Let’s find out… 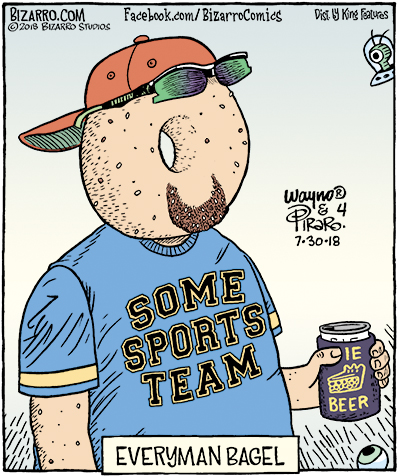 Whenever I see this dude, I smear his face liberally with cream cheese. Yes, I’m a tough guy, especially when it comes to dealing with breakfast food. Don’t even get me started about how I great donuts.

By the way, if you like the shirt this dough-head is wearing, you can add similar ones to your own enviable wardrobe by clicking here.  (Sadly, we do not yet offer the Pie Beer cozy.) 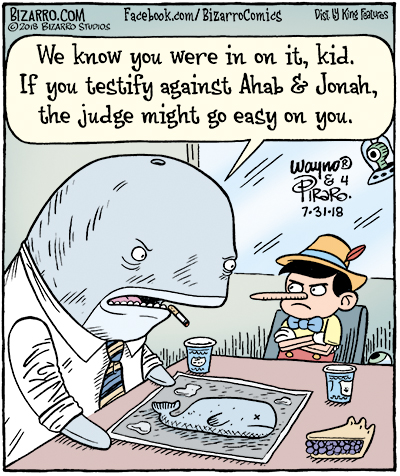 If you’re a fan of great animation and you’ve not seen Disney’s 1940 Pinocchio, you should. It is truly a marvel, especially when you consider that computers were decades away from being invented and every molecule of it was drawn by hand. Of course, you have to ignore the fact that the plot vilifies a peaceful, endangered species as a bloodthirsty monster (Monstro the whale) but it was created at a time when humans still felt they were divinely ordained by a god who put the earth and all it’s other creatures here for us to abuse and destroy however we saw fit, like the spoiled children of a mindless billionaire.  Other than that, it really is an awesome movie. 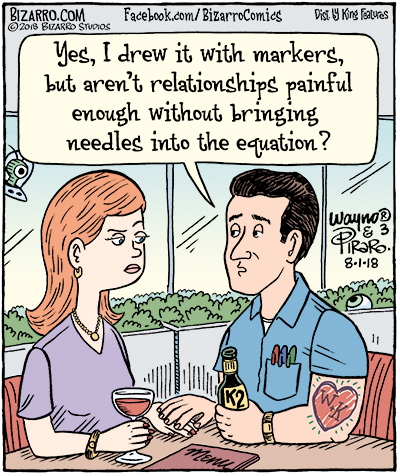 I’m embarrassed to admit that one of my tattoos refers to a long-gone, perfectly awful relationship partner. If only getting rid of her had been as easy and painless as amputating my arm was. If someone is looking for an excellent business opportunity, might I suggest Laser Spouse Removal? 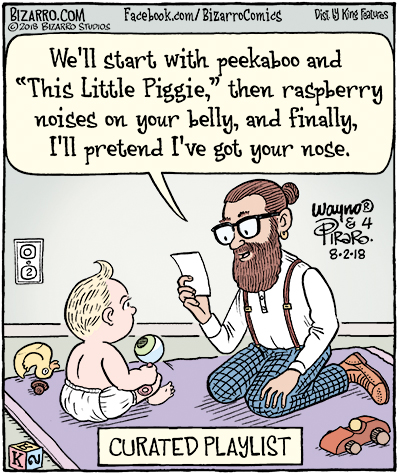 And this little piggie doesn’t know if he’s at the market or going wee, wee, wee all the way home because his upturned snout is buried in his cell phone 24/7.

Over on the other side of the Internet, Wayno’s weekly blog has some interesting and amusing comments about where this week’s jokes came from and almost went. He also features a really weird playlist of some of his favorite strange songs from years gone by. (Some might say the playlist was “curated,” but Wayno would not be among them.) Check it out, because you’re going to dig it, daddio. (Link at end of this post.) 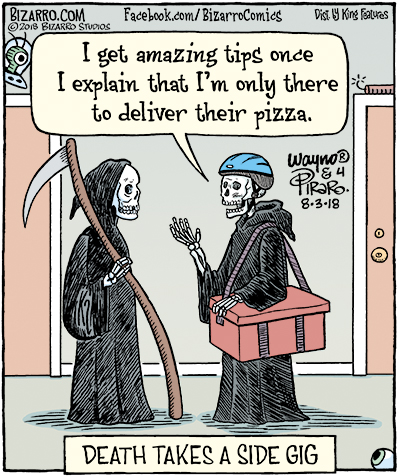 He’s wearing a bike helmet because his dress keeps getting caught in the chain and he falls down a lot. The pizza he is delivering is the Triple Meat Extra Bacon Reaper Special with cheese-stuffed crust. Ask for it by name and serve the leftovers at your funeral. 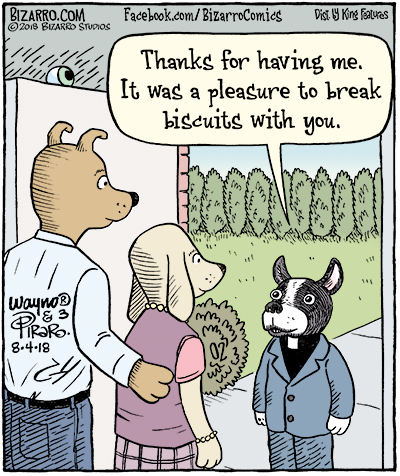 Most dog dogma is derived from the fact that “dog” spelled backward is “god”. Seems like a silly thing to build a religion around until you realize human religions are typically based on even fewer facts than that. As Tiny Tim might have said, “Dog bless us, every one.”

That’s the straight poop for this week, Jazz Pickles. Thanks for following the carnival wagon this far. If you like what we’re doing, please visit some of the links below and consider making a donation or buying a thing. As newspapers diminish, folks like us turn to alternative methods to keep the cartoon comedy canoe afloat!