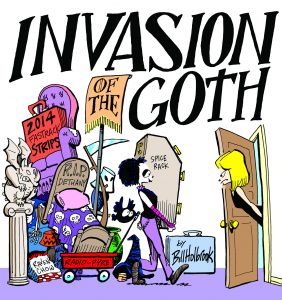 A note about Virtu/Noir (See below)

We’ve just uploaded an update of our iPad app, and we’re waiting for it to be approved by Apple. There’s a backlog for that, but thanks for your patience until then.

In July’s video Dethany recaps the offline vacation that she and Guy spent in the mountains, and how this led to the upcoming dinner meeting between their parents…and all the dread that comes with that.

Major news! “Fastrack” is now available on Apple News. ? On your Apple mobile device, access the News icon. At the bottom of the screen you’ll see a Search icon. Tap it, and type On the Fastrack. It will take you to the “Fastrack” channel and you’ll be able to access today’s strip!

Invasion of the Goth

New Fastrack collection, featuring the complete year of 2014. See Fi agree to take in Dethany during a home repair. Buy it here.