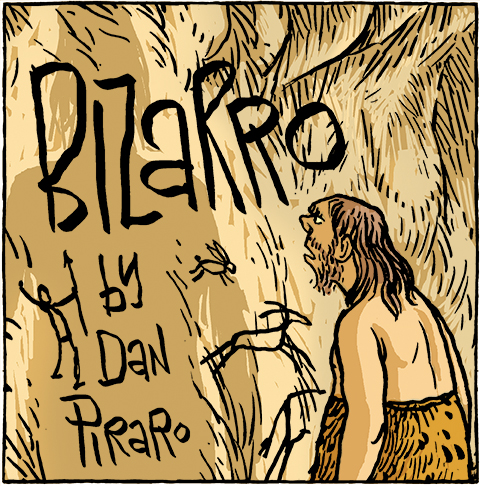 (Cause the below cartoon to embiggenate by tapping the big elephant.) 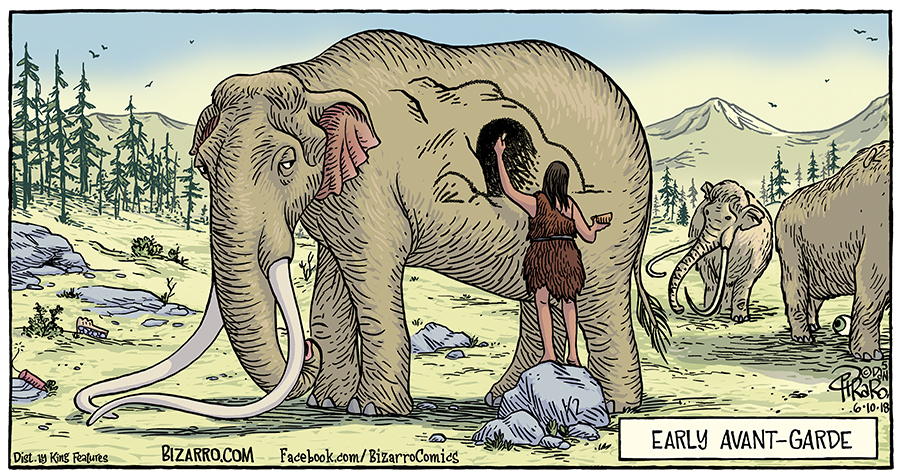 Bizarro is brought to you today by Being Considerate.

Should you be having any trouble with understanding today’s cartoon, think about what cave dwellers typically painted and where they painted them. Then consider the definition of avant-garde. If you still don’t get it, go to the nearest window and jump out of it. But make sure it is on the ground level and that there is a soft place to land. No need to get overly dramatic about a cartoon, for crap’s sake.

Here is some fun, big news: We finally (finally!) got our new set of Bizarro enamel pins from the manufacturer! We immediately posted them in our shop and they are flying off the shelves! (We actually don’t keep them on shelves but “flying out of the old, steamer trunk buried in the ground out behind the garage” doesn’t have the same ring to it.)

As seen in the photo below, you can now get the Alien, Pie, Eyeball, and the Inverted Bird separately or as a group at a lower price per pin. We also have a new batch of the official Bizarro Jazz Pickle pin, which no BJP should be without. 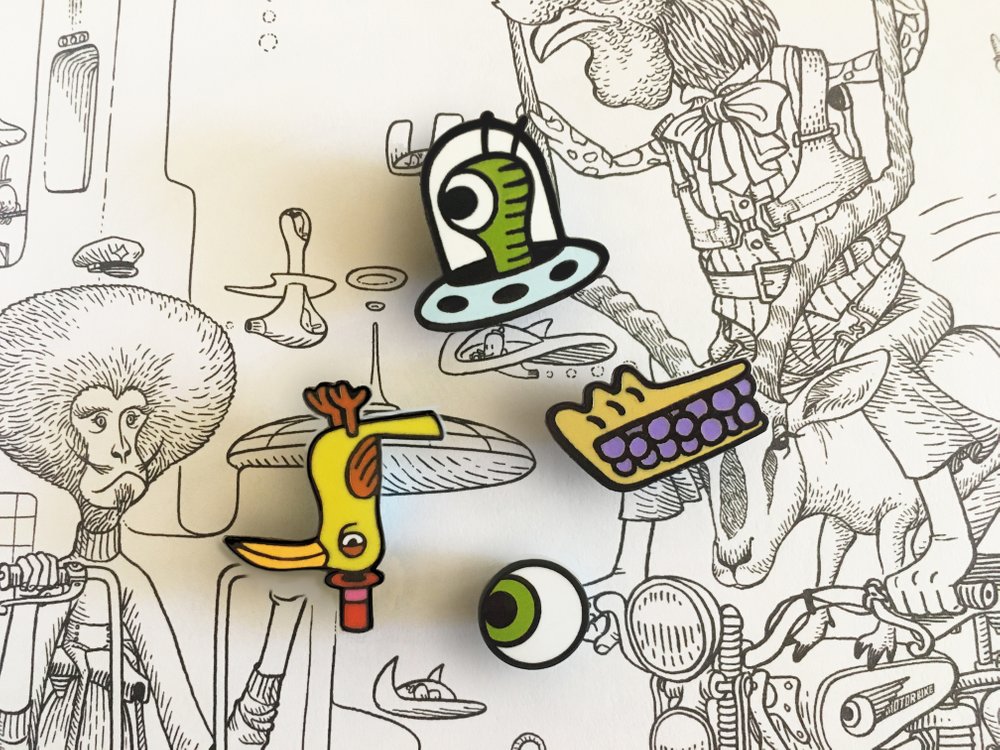 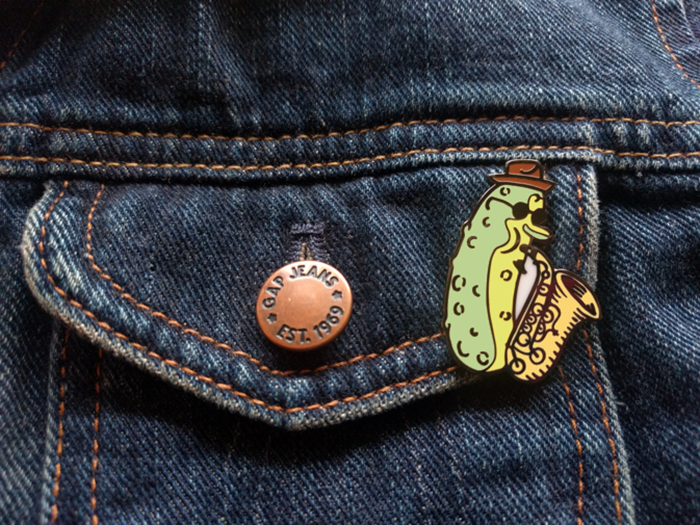 Keep in mind that these pins are not for just any idiot stumbling down the street looking for a good deal on tacky crap. They’re only for very cool, confident, tasteful, intelligent connoisseurs of humor and art. Get yours now before a gang of teenage punks beats you up for not having one! Our previous pins sold out fastly and we expect these to do the same. 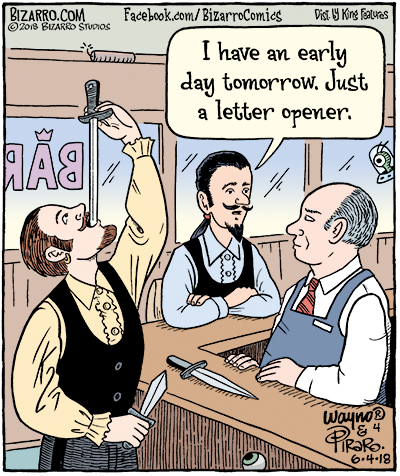 Little known carny fact: sword swallowers are careful not to drink too much because vomiting a sword can be even more dangerous than swallowing it.  Always remember: friends don’t let friends swallow drunk.

(Note: Yes, there are five secret symbols in this cartoon but Wayno only marked it as four. Perhaps this is what happens when cartoonists count drunk?) 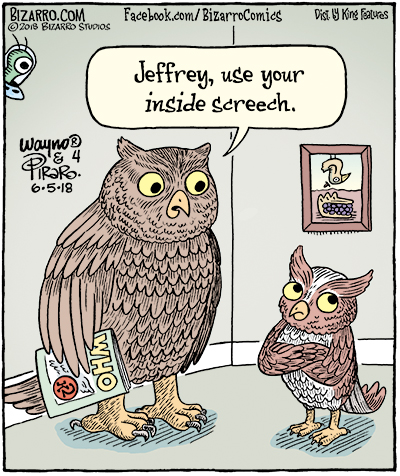 One of the benefits of being an owl is that you don’t need a college degree. You can get pretty much get any job you want by just wearing a graduation cap to the interview.
On a related note, I’ve not seen or heard an owl since I moved to Mexico so I’m still wondering if they say “quien”.

I got so drunk on airline liquor once that I threw up a teaspoon of tiny vomit and woke up the next morning in bed with a tiny stranger. 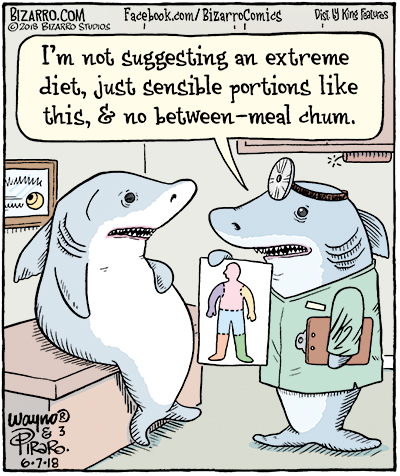 The average American is so large these days that sharks off the coast of the U.S. carry to-go containers.  When I posted this cartoon on Instagram, several commenters mentioned that sharks do not eat humans. I reminded them that they also do not have medical practices.

The really freaky part is that you can see the chewed-up gummy fish in his stomach after he swallows. You don’t even want to know what it looks like meandering through his colon.

Which makes me wonder if there is a product called Gummy Turds. Gross, yes, but would you be surprised if it existed? Of course not. (Just looked it up and apparently, there is and the name is even worse.)

I asked one of those Alexa things what its relationship is to 2001’s HAL and it locked me out of my house. If you ask her about George Orwell, she sends a SWAT team to your house. I’m not normally an alarmist but I’m convinced that technology will kill us all.

Thanks for following me down into the cartoon caverns today, Jazz Pickles. I deeply appreciate your attention and support. Don’t forget to pop over to Wayno’s blog and see what light he sheds on this week’s batch. And please peruse the links below, which help us know you care.