Bacon in the Sun 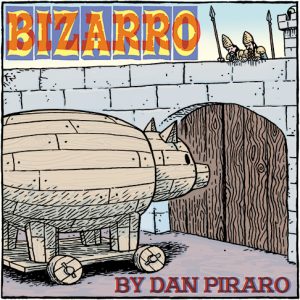 (To begin the embiggenation you crave, click any pig’s butt.) 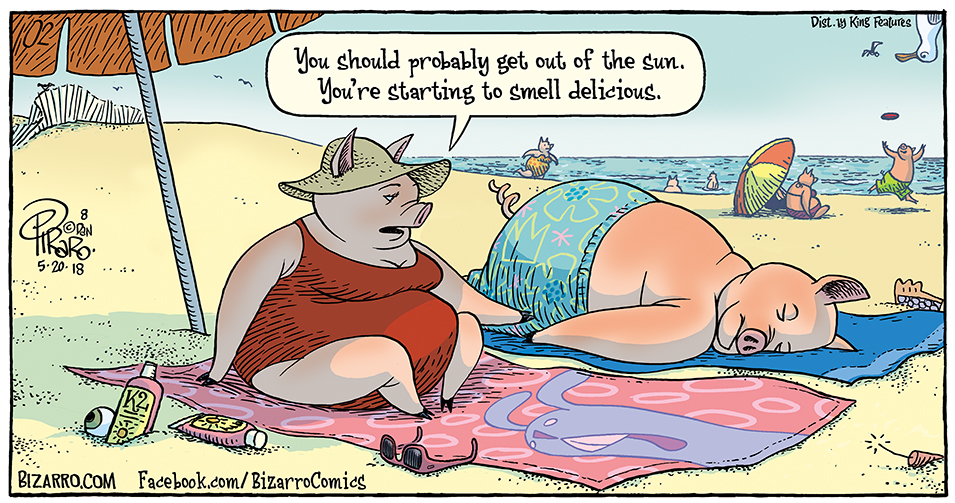 Bizarro is brought to you today by No One Is Immune To Internet Ratings.

At first, this seems like a very dangerous situation for Señor Cerdo, because there are a lot of humans who cannot resist the smell of cooking pig. But fear not; Señor Cerdo is nobody’s fool––he and his esposa patronize exclusively swine-only beaches and they always make it back home with their bacon bits intact.

And what the hell was Wayno up to last week, you may ask. Let’s find out… 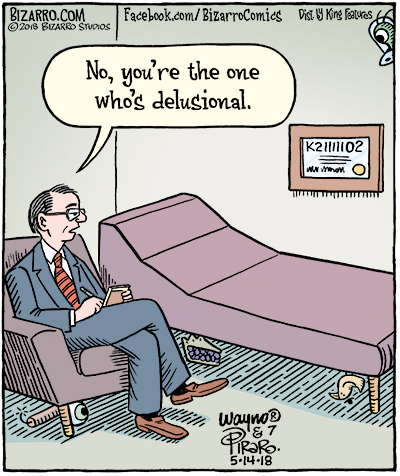 I’ve been to a handful of therapists of different sorts over the years and received a lot of benefit from it. One thing I’ve learned about the sort of name-calling that the shrink in this cartoon has resorted to is that sticks and stones may break your bones, but invisible clients will steal your unicorn. (No, you’re delusional.) 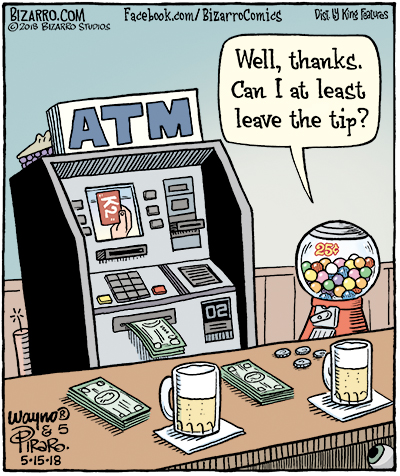 Over on Wayno’s weekly blog, he posts a couple of sketches of completely different scenarios that this gag went through before we arrived at the final version you see above. The URL for his blog is at the end of this post, so don’t miss it!

On a related note, if you type “gumball” in Mac Mail, it will autocorrect to “gumboil”. How is “gumball” not officially a single word but “gumboil” is? On the bright side, gumboils are not sold in grocery store vending machines. 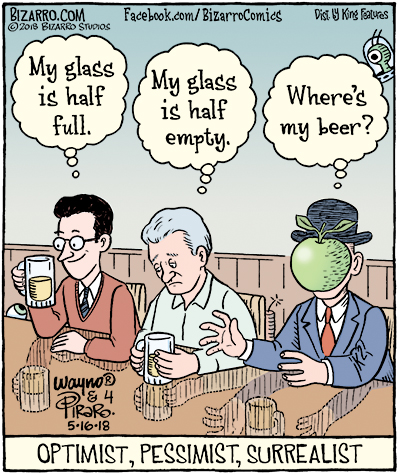 As a surrealist myself, I can say that my beer often resides only in the reflection of the bar. At least, that’s the way it looks from behind the floating fruit that blocks most of my vision.

Not that you asked, but you can view my surrealist art, much of it in various stages of progress, on Instagram here: @diegopiraro 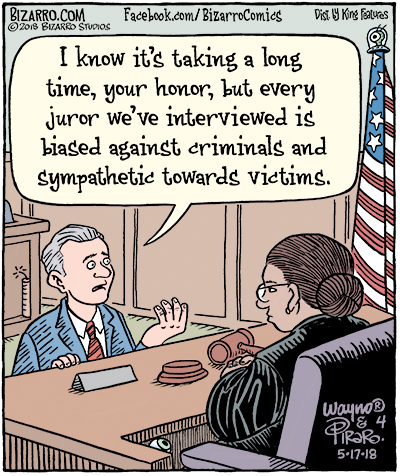 I was on a jury once in a civil case in Texas. Six of us were asked to decide if a person in a car accident should be awarded money from the driver of the other car involved. After a short trial of a couple of hours, the facts were clear; the person who instigated the suit was lying. Neither car was damaged and no doctor appeared to testify on behalf of the plaintiff’s claims that his neck was injured from whiplash. He did, however, testify that another car tapped his car from behind in bumper-to-bumper morning rush hour traffic; he had a brief conversation with the other driver; they exchanged contact info and he drove on to work. Later that morning, he called his wife and told her about the accident. She told him to call a lawyer immediately. He did and the lawyer told him to call a clinic called “Whiplash Chiropractic” and get examined. The chiropractor from this auspiciously-named business was his only witness and admitted upon questioning that he had worked with the plaintiff’s lawyer dozens of times.

In the deliberation room, a quick conversation revealed that all six of us saw it the same way; there was nothing wrong with the man or his car, he just wanted some free money. However, four of the six of us wanted to find for the plaintiff and award him that money! I was not among them.

Their explanations of why they wanted to award money to a liar were slightly different but in the end, they were all imagining that a payday like this would come to them someday. I remember one of them saying, “When you make a mistake, you’ve got to pay.”

The one other juror who did not want to award him any money and I spent nearly four hours convincing them that this kind of fraud (and attitude) is one of the things that makes insurance rates (of many kinds) so high in the U.S. and causes who-knows-how-many other social and legal problems. Plus, we then have to live in the community that we have been encouraging as jurors to be institutionally dishonest. Some agreed quickly, others held out until they were just tired and wanted to go home and they gave in.  People who don’t stand for much tend not to stand for long. We eventually awarded the man nothing.

That’s my jury story. It makes me a little sick every time I tell it. 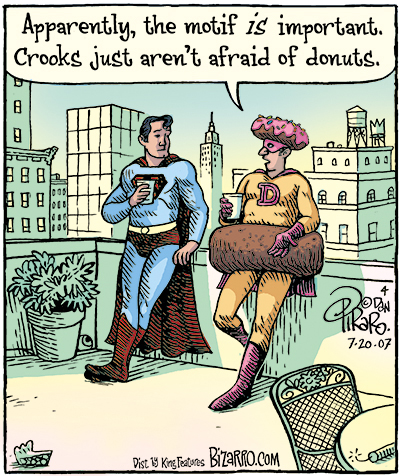 Remember the old days? Well, that’s where this 2007 cartoon of mine is from!

One good thing about Donutman is that he is a positive role model for folks with big bellies. He’s also a roll model for anyone wanting to make rolls that look like donuts for some reason. 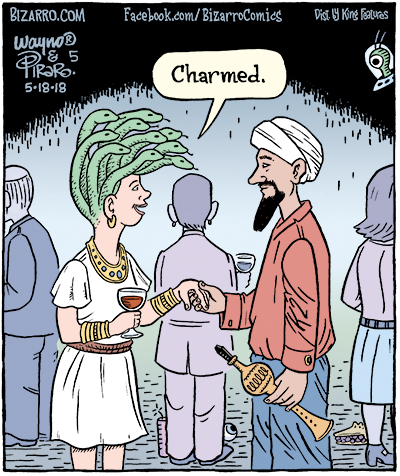 I picked up a woman in a bar once who had a snake in an unexpected place, but it was anything but charming. And for those of you whose minds are in the gutter right now, the unexpected snake was not idiomatic and was in her purse. 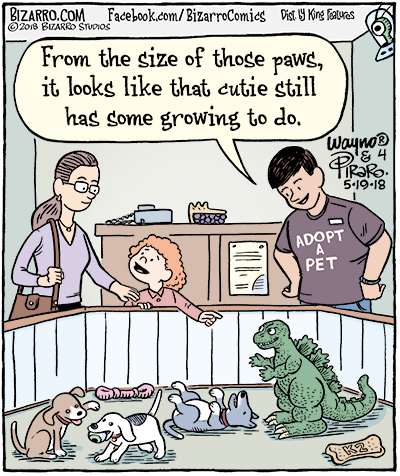 Little-known Godzilla trivia: After he decided he was atheist, he insisted on being called Nothingzilla. Rodan took up sculpture and changed his name to Rodin. Mothra gave birth and changed her name to Mothar. (I don’t know the names of any other Japanese movie monsters.)

That’s the story this week, Jazz Pickles. Please have a grand and groovy week after a quick glance at the links below, some of which help us keep the campfires burning at Rancho Bizarro.