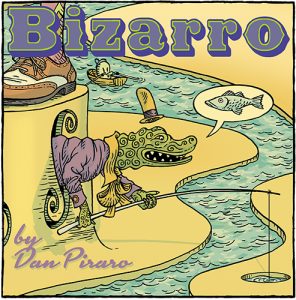 (Search for the 8 Secret Symbols in the cartoon below by clicking on any skull.) 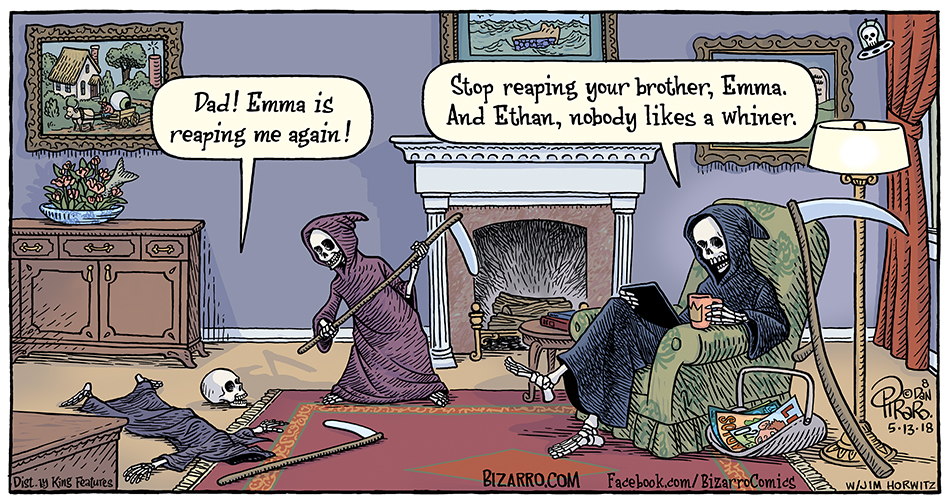 Bizarro is brought to you today by Giving Mom Hidden Powers.

If you have kids, chances are that from time to time, your Sunday looks a bit like the scene above. That’s why it’s important to be certain the kids are using blunted weapons and farm implements in their playtime. You can never be too safe; as you can see, the Grim Reaper’s kids are using safety scythes even though they have no eyes to lose.

Thanks to my good buddy and cartoon colleague, Jim Horwitz (whom we call JimmyHo inside the cartoonists’ secret clubhouse) for the initial gag idea here. Wayno and I put our heads together and punched up a word or two and arrived at the innocent bit of family fun we hope gives you a smile. You can see JimmyHo’s cartoon strip, Watson, right here right now. While you’re there, you might even see one of his latest strips that feature some of the Bizarro Secret Symbols.

Hey, let’s find out what Wayno was up to last week… 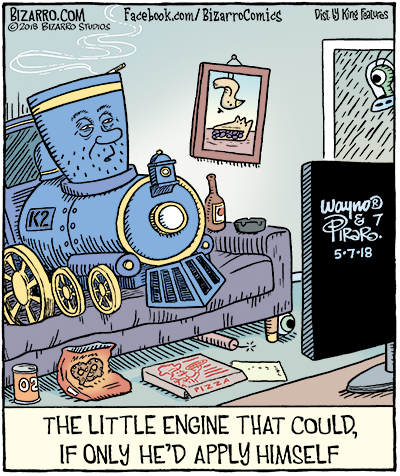 After I dropped out of college, I shared an apartment with a bulldozer who was like this but at least he could clean up the entire apartment in four minutes. 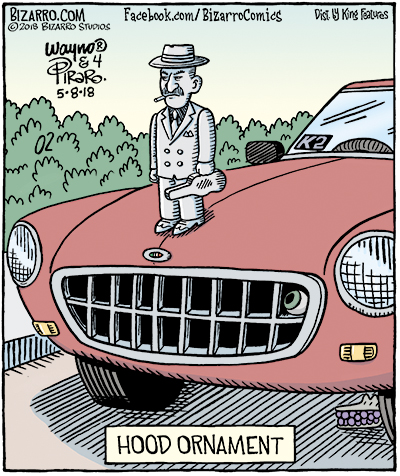 I want a hood ornament like this except I want mine to be Itzhak Perlman. I’d also like to have a car like this but the narrow, cobblestone streets in our little Mexican town would reduce it to scrap metal in a matter of weeks. 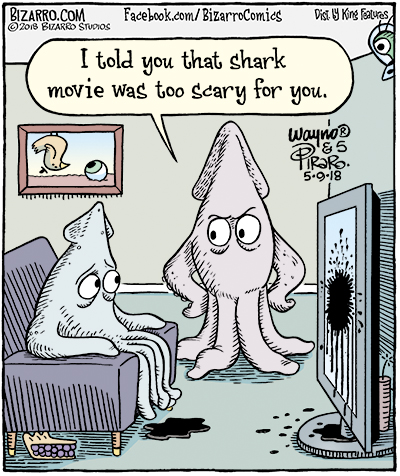 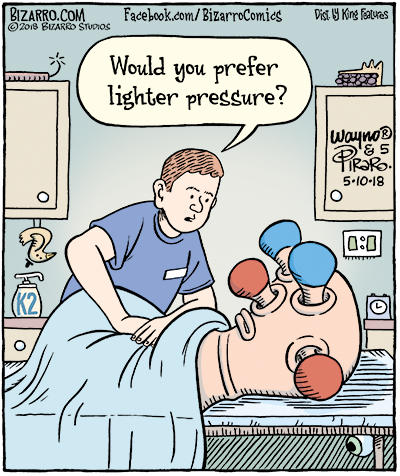 In a few months, we’ll use this same art above for some kind of childbirth cartoon. The caption contest for that future cartoon starts now! Submit your caption idea before midnight four years from today for the chance to win an imaginary island all your own and an invisible yacht with which to get there! 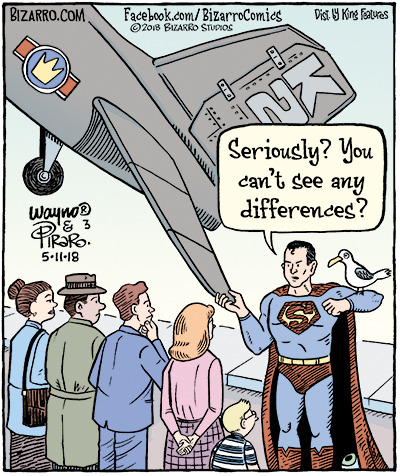 Over on Wayno’s weekly roundup of Bizarro cartoons, he has some amusing thoughts on the citizens of Metropolis as regards this cartoon. (The URL for his blog is at the end of this post.)

In the meantime, if you’re in the dark about this cartoon, spend six seconds here. 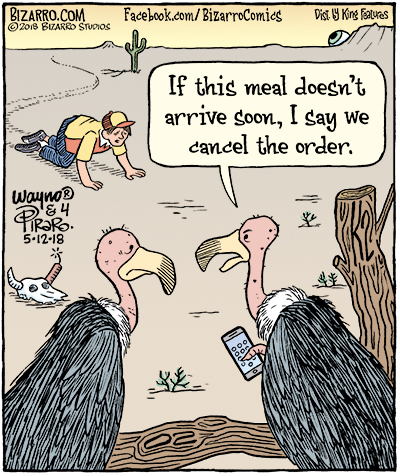 I’m so glad that human beings didn’t evolve in the style of vultures, leaving us with thick fur on every part of our bodies below our neck, but a completely bald head. I don’t think even Hollywood sex symbols would look very attractive like that. (Now I’m probably going to get hassled for “fur shaming”.)

POR FAVOR: If you’re into other kinds of art, please follow my other, new Instagram account for my fine art, which is under the name I sign on the non-cartoon art I’m doing in Mexico, “Diego Piraro”. Below is a shot of the first oil painting I’ve completed since I started painting almost full-time in recent months. It is a tribute of sorts to Frida Kahlo. Some detail shots are on my Instagram page, too, as well as other watercolor paintings and pen drawings I’ve done, and also a new painting in progress that features my beloved Olive Oyl. As always, I welcome your comments on my work. 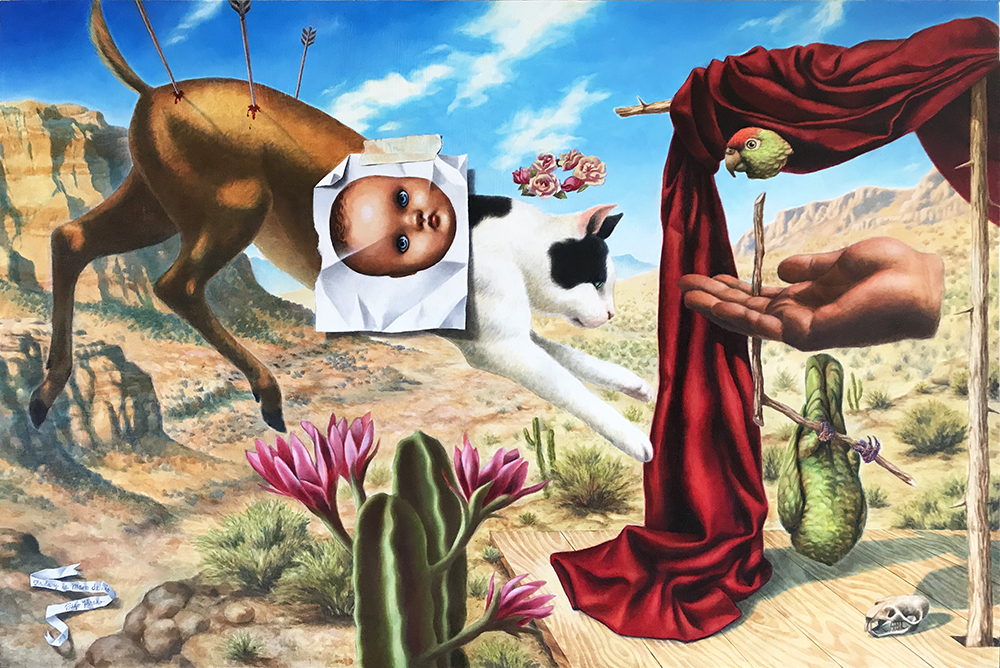 Thanks for staggering along with me this week, Jazz Pickles. Please have a look at some of our links below and don’t forget to pop over to Wayno’s blog to see what he has to say about this week’s cartoons!