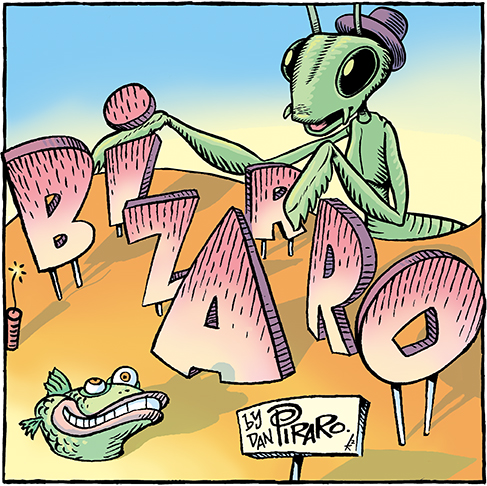 (For a touch of embiggenation, click the sleeping man’s slobber.) 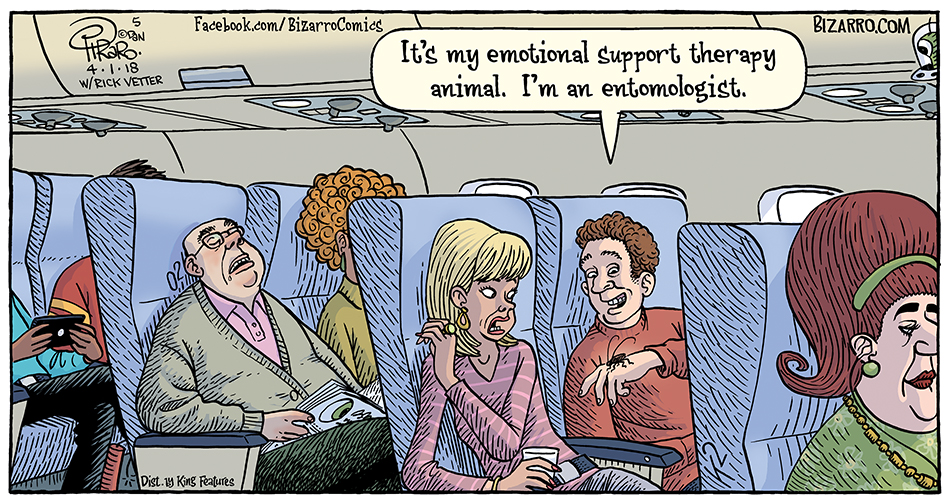 Bizarro is brought to you today by Attention to Kerning.

“Emotional Support Therapy Animals,” or whatever you prefer to call them, have been in the news lately but I don’t read much of that sort of news so I’m not sure what the stories are about. Just for fun, let’s assume that the stories were about airlines cracking down on people putting “support animal” vests on their pets when they don’t actually need them, then, when asked if they have an actual need for the animal, people get indignant and pissed off that an airline is questioning their disability, when, in fact, they actually don’t have one.

If that’s what the stories are about, then I don’t know the answer. I’d be inclined to say that we humans are so impossibly complex and muddled that we can convince ourselves of pretty much anything, including that we can’t deal with the real world unless our Cocker Spaniel is with us. But what if the person sitting next to you has convinced himself that dogs are bad luck on airplanes and could cause it to crash? Whose rights do we protect?

And what of the passenger who is anxious unless a tarantula is climbing around in their hair? Life is complicated. 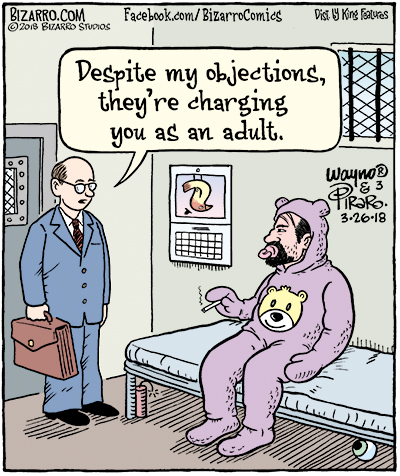 On some social media post or another, my pal, Wayno said this man is serving “onesie to life”. I can’t think of anything funnier than that to say. 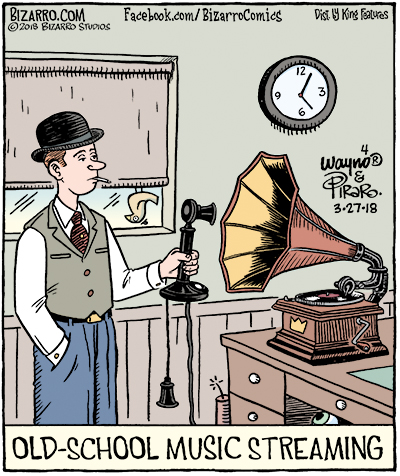 Thank goodness those days are over and we can now enjoy music without ever paying a dime to the talented, hard-working artists who create it. That’s true of cartooning, too. Thanks to the Interwebs, it has never been easier to get your music, art, photography, etc. seen by the public, but it’s never been harder to get paid for it. This seems like a good time to visit this page.  Or, visit my shop and nab yourself something dandy!

BTW: Over on Wayno’s version of the weekly blog cartoon rundown, he talks about a truly strange jukebox system that used to be in Pittsburgh bars and restaurants back in the day. So strange. Be sure to check it out when you’re done with my nonsense here. URL is at the bottom of this post. 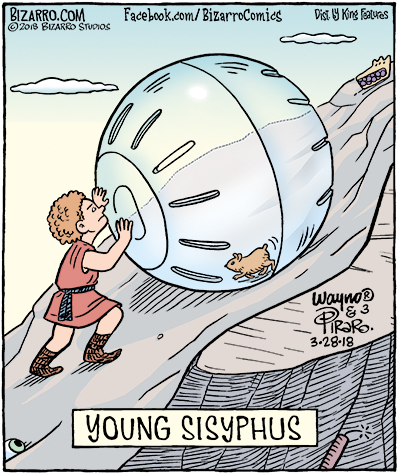 In Greek mythology, Sisyphus was a corrupt king who was punished for eternity by being forced to roll a boulder up a hill only for it to roll back down and repeat the process. What should the Cheeto Mussolini be forced to push up a hill for eternity? I vote for a golf cart full of all of the women he has molested or paid off to keep quiet, plus his ego. Of course, that cart would be heavier than a collapsed star at that point so it would never budge an inch and would, instead, suck everything around it into a black hole. Not unlike his presidency, come to think of it. 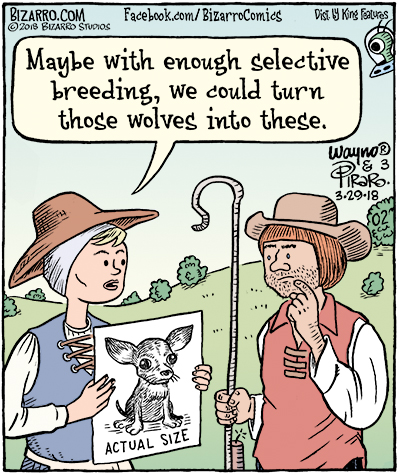 Most people (except creationists) know that Chihuahuas evolved from wolves. But relatively unknown is the fact that people originally bred Chihuahuas as snacks for wolves so they’d leave their livestock alone. Sadly, they bred faster than the wolves could snack so we’re now stuck with a world full of Chihuahuas.

If bunnies have been on your mind today, perhaps it is because you long for a Bizarro Bunny enamel pin to wear on your favorite shirt, jacket, coat, hat, bag, or naked flesh if you’re one of those people into painful piercings. Whatever the use, snag one here before they sell out. 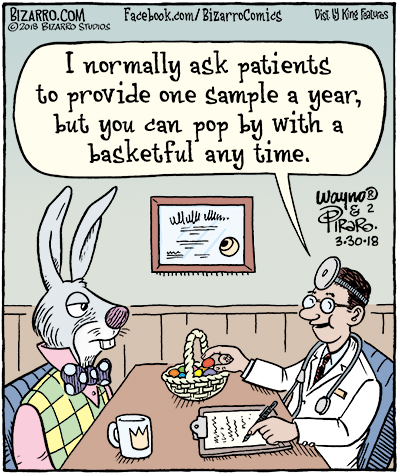 On Zombie Jesus Day (which happens to be today!) we have a giant, anthropomorphic, diabetes-encouraging rabbit sneaking into homes at night to commemorate a magical Jewish carpenter who came back from the dead and flew up to heaven. Most people only consider half of that statement to be make-believe.

It is inevitable that some of the people reading this will be offended by my referring to Easter as “Zombie Jesus Day”. If that is the case, rest assured that a magical Jewish carpenter whose dad is literally GOD can take care of himself and doesn’t need you to defend him against humor. 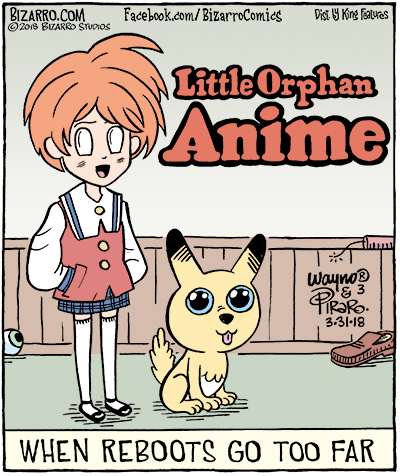 For those readers under a certain age, Little Orphan Annie was a very popular newspaper cartoon, then a Broadway musical and movie. For those OVER a certain age, “anime” is a Japanese animation form that I personally find ugly, noisy, and unwatchable. When I say that, I always get people saying, “Watch (name). It’s different. You’ll love it.” No, I won’t. I don’t even like Spirited Away and everyone worships that one. It just isn’t my thing.

Other people point out that the dog character is based on Pikachu, which apparently is something other than Anime. When you’re really into something, details like that matter. When you’re not, it’s hard to take it seriously enough to even finish typing a respo…

That’s it for this week, Jazz Pickles. According to comments and messages, most people are enjoying my new website, in spite of the fact that a couple of things still aren’t working properly. (They will soon!) A few of you aren’t crazy about it but have been polite in expressing that, so thanks. A few others have been rude about it, so I have relieved them of the obligation to visit. I’m guessing the rest of us won’t miss them.

Please have a gander at the links below which we hope will both amuse you and encourage you to continue to support our humor and art efforts.

Till next time, be happy, be smart, be nice, and resist ignorance and fascism.