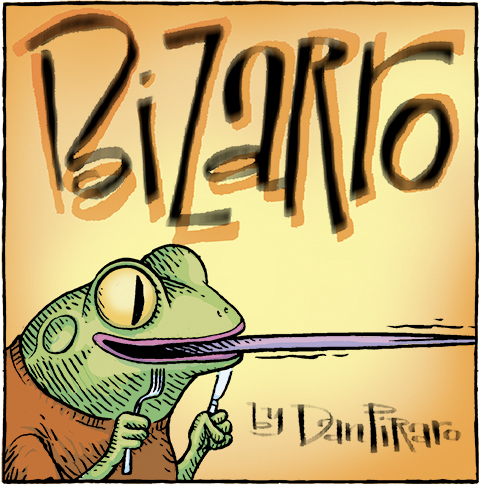 (To achieve and enjoy enbiggenation, click on any regenerative limb.) 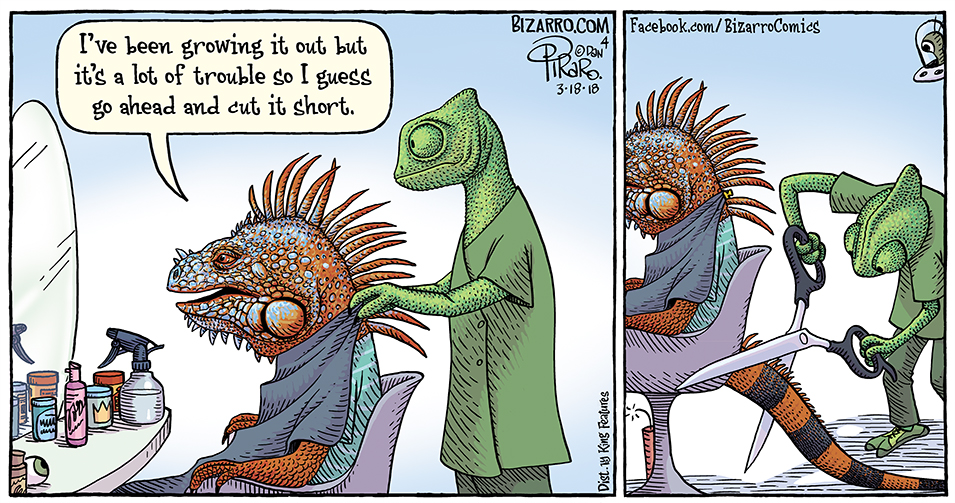 Bizarro is brought to you today by The Four Hairstyles of the Apocalypse.

This week’s Sunday cartoon is a fun little twist of expectation and I had a grand time drawing it. I’m a fan of lizards (though I do not have any as pets) particularly the prehistoric-seeming nature of them, so drawing them is always a treat. Recently, Olive Oyl (O2) and I were kayaking through some lagoons near a beach in Mexico and saw dozens of these big, orange iguanas with black striped tails hanging out in the trees. SO cool.

A quick word to my younger readers about this cartoon:

KIDS!  DO NOT TRY THIS AT HOME! By that, I mean do not open a beauty salon in your home without the proper permits from your local government; do not ask someone to “cut it short” without being specific about WHAT you want to be cut short; and do not let those giant blue and orange lumps on your face get out of control before seeing a physician. Also, do not operate a pair of scissors that are as tall as you are without adult supervision.

And now, the Week in Wayno… 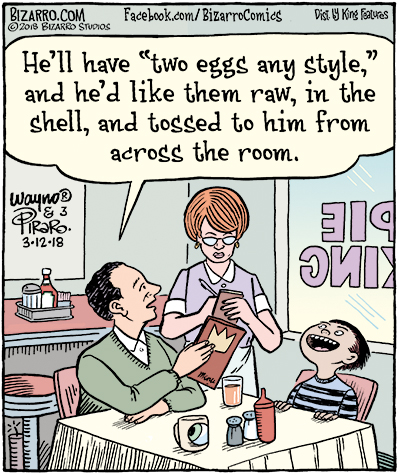 I usually ask for my eggs “1970s Pimp Style”: comes with a big, purple, velvet hat, full-length velvet coat and some kick-ass platform shoes, MoFo. Once it arrives, feel free to address other diners who may be staring at you with, “Whose eggs YOU lookin’ at, bitch?” 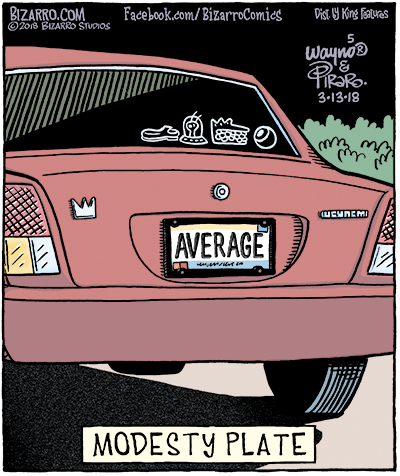 As an avid motorcyclist, I look forward to a time when virtually all cars and trucks are self-driving, and ones that are not will have an official designation alerting other drivers of that fact. My preference is for big stickers on the front and back bumpers that say, “CAUTION: APE DRIVER”.

Creationists can, of course, opt for ones that say “CAUTION: UNIQUE AND PRECIOUS CREATION MADE IN GOD’S IMAGE THAT DRIVES 99% LIKE A CHIMP.” 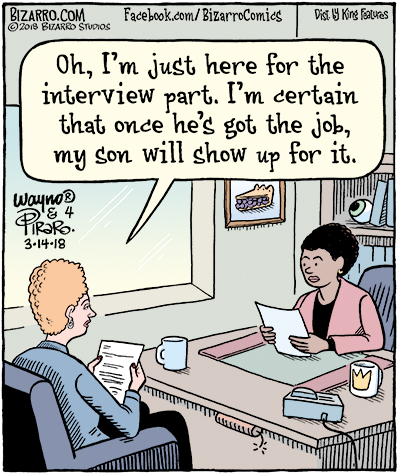 Many American offspring today are coddled by their parents and allowed to remain virtual infants without a driver’s license or a job and to live with their parents well into their twenties, thirties, and sometimes beyond. As for me, as soon as I was out of college, my parents started charging me rent and shooting at me with a BB gun until I moved out. It forced me to grow up and make something of myself, as well as to learn to navigate the world with sight in only one eye. 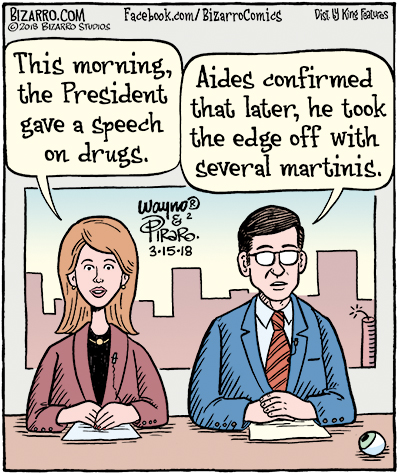 Show me someone who thinks that Marijuana should still be a controlled substance and I’ll show you someone who badly needs to get stoned on a regular basis.

On another note, I was alarmed by how many nitwits came at me on social media with castigations like “Trump doesn’t drink” and “More fake news to discredit the president,” and the like. Considering that, among other high crimes and misdemeanors, the Cheeto Mussolini holds the record for the most demonstrable lies ever told by a sitting president––i.e.; in his first 10 months in office, he told 103 separate untruths, many of them repeatedly, while Obama told 18 over his entire eight-year tenure––how can you take his word that he doesn’t drink? And if this supposed “lie” upsets you, it seems likely that you think drinking is a bad thing and you would not want people to think the president drinks if he doesn’t. But lying, molesting women, supporting white supremacists and neo-Nazis is okay somehow? (I don’t have enough bandwidth to list all of Trump’s highly offensive offenses, so we’ll leave it at that.) 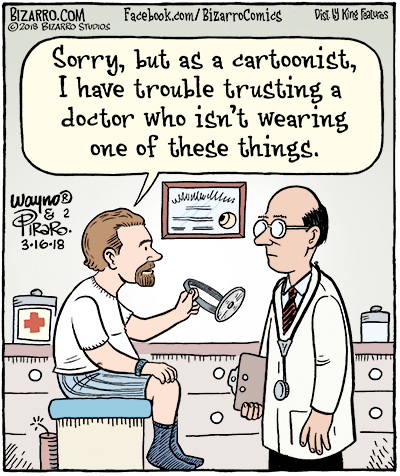 I do not require my doctors to wear one of those head-mirror things but I have personally worn a Rudolph the Red-Nosed Reindeer costume to my dental appointments so we can sing “We’re a Couple of Misfits” together. 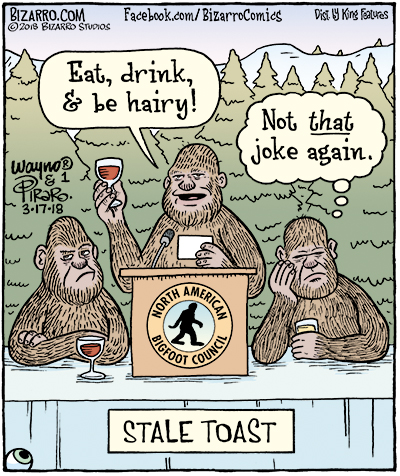 Are multiple Big Foot creatures called “Big Foots” or “Big Feet”? “Sasquatches” or “Sasquati”? “Hallucinations” or the “Consequences of Hiking on Meth”? Wayno has some fun stuff to say about Bigfoot on his weekly blog post this week, and also a few links to some of my and his previous Big Foot cartoons.  We just love that giant lug and his comedy potential. (A link  to Wayno’s blog is below.)

The new batch of Jazz Pickle pins is in so nab some before they sell out. (Click “Bizarro Shop” at the top of that page to find them also sold individually.)  We also have some shirts, mugs, tote bags, and an educational poster about cat puke that you may want to share with your feline companion.

Thanks for reading this far, Jazz Pickles. Until my next post, be happy, be smart, be nice, and resist ignorance and fascism.  And please help support our meager humor efforts by clicking the links below.