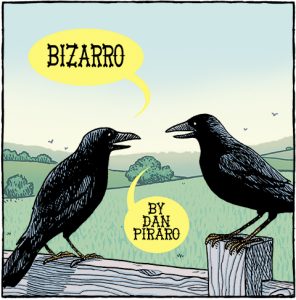 (To begin the embiggenation process, click the gimme cap in the cartoon below.) 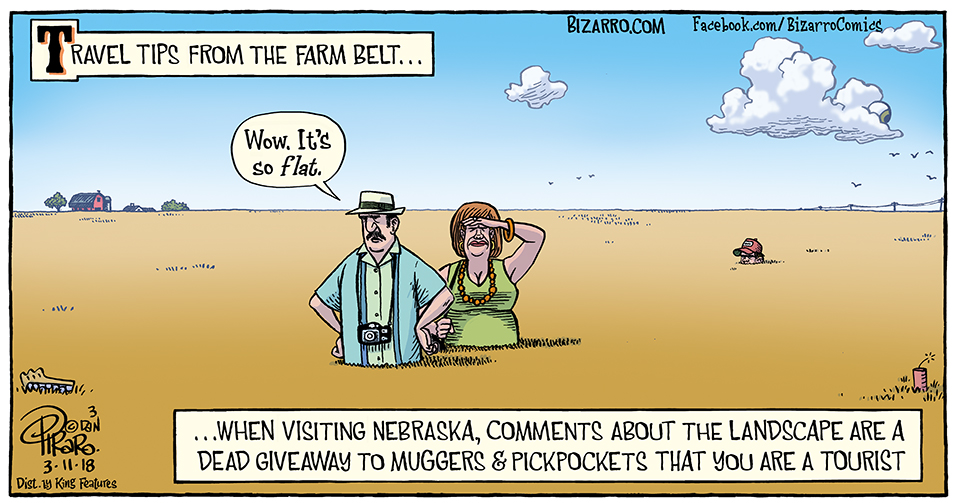 Bizarro is brought to you today Trump Voodoo Doll.

There was a time when people were romantic about America’s “heartland,” as though it was where good, wholesome, moral, honest folks came from, as opposed to “big city folk”.  But to my mind these days, it seems to represent people who voted for and continue to support a racist White House that openly promises to take benefits away from poor children, the elderly, the disabled, the disadvantaged-in-general, while arresting innocent children who were born in the U.S. and throwing them out of the country because their parents came here out of desperation to make a better life for themselves and their children. (Don’t even try to tell me the immigrant issue is about jobs because there are no facts to back that bullshit up. And if you think it’s not about racism or jobs, it’s about the “rule of law,” let’s audit your taxes for the last ten years and see how law-abiding you are.)

If all of that isn’t enough to dissuade you from visiting The Heartland, consider that not one newspaper in Nebraska carries Bizarro, but all of them carry Marmaduke and Family Circus. There’s a reason they call these places “Flyover States.” Innumerable reasons, actually.

Disclaimer: If you are a decent, compassionate, open-minded person in The Heartland who thinks racism and bigotry have no place in our government, I’m not talking about you.

Disclaimer disclaimer: If you are a decent, compassionate, open-minded person in The Heartland who enjoys Bizarro but also really enjoys Marmaduke and Family Circus, and not in an ironic way, I might still be talking about you.

Hey! What’s my buddy, Wayno been cartooning about this week?… 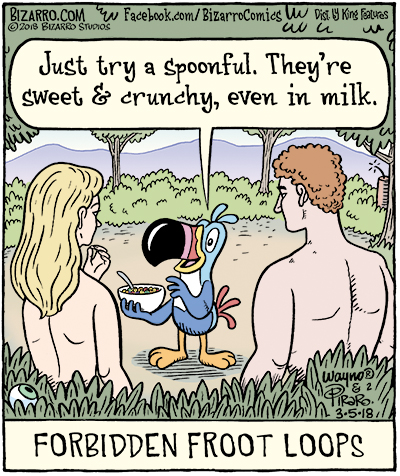 The thing I like most about The Bible is that you can interpret it to mean anything you want. (Unless you’re what the rest of us call a “religious nut.”)  In this case, Wayno interprets the “serpent” to be a representative of Kellogg’s who is attempting to entice some friendly naked people into losing their souls while also promoting poor spelling.

All these years I’ve been avoiding snakes and it turns out toucans are the devil. And I guess that lump in the front of my throat is an “Adam’s Loop.”

Wayno writes about our week in cartoons every weekend, too, and you’ll find a link to that post at the end of this one. BUT… here’s a short, older post in which he describes the clever name he has given to the specific mechanism behind the Froot Loop joke above.

I hope he carries a really big towel to the gym to wipe off the machines when he’s done melting all over them. When he’s had a really good workout, he rewards himself with a slice of nose cake.

If you’ve not been to my mostly-new shop lately, please have a look. We sell products to help support our cartooning habits as newspapers continue to get smaller and fewer. Below is a poster I designed and illustrated specifically for your home, office, clubhouse, or bunker. 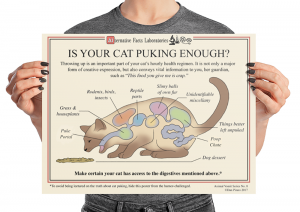 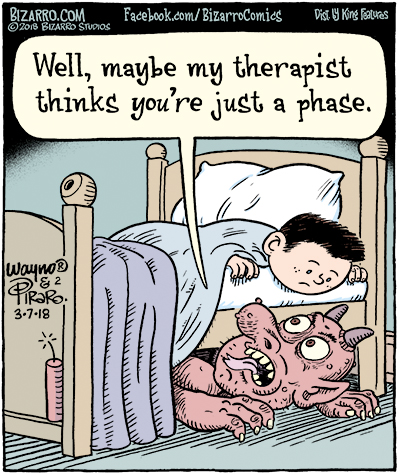 As a kid, I wasn’t particularly afraid of monsters under my bed but as an adult, I always check under my analyst’s couch before I lie down.

Lately, I’ve been indulging myself in what the Interwebs call, “Throwback Thursday.” Surprisingly, it does not involve pictures of fish that people have caught that are too small to eat––that’s called “Here’s a Picture of Me Torturing a Helpless Water Dweller Thursday”. Throwback Thursday is actually about stuff from the past, so below is a cartoon I did in 2003. 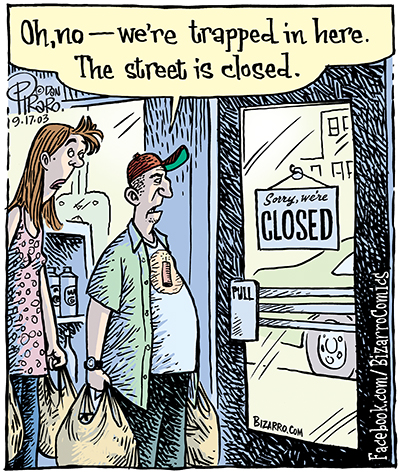 This is one of those comics that was based on my own experience during which I was trapped inside a small store in Kansas for 45 minutes while I tried to convince the other customers that the town was not closed, this was simply the back of a sign meant to be read from outside. “Then why ain’t it red?” was the reply.

This is what happens when entire states don’t carry Bizarro. I make mean jokes about them. Sometimes as I fly over them. 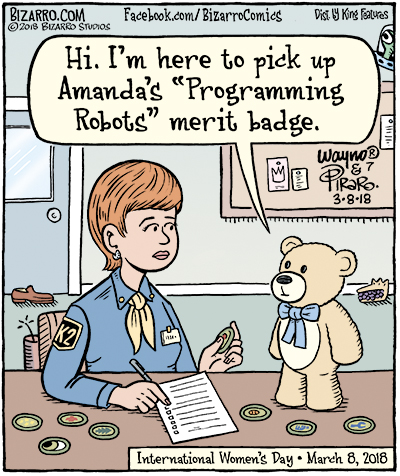 It took an embarrassingly long time but we are now finding out that women can do anything that men can do. Unfortunately, they still have to do it at a fraction of what men are paid to do the same job. (Especially white men.)

No, this does not mean we hate men or are ashamed to be men or white or want all white people, especially the men, to be rounded up and shot into outer space. We just support fairness no matter what color you are or what kind of plumbing you have. And no, America does NOT already have that kind of fairness.

In honor of women, Wayno and I are supporting a swell non-profit organization that helps educate girls and young women in technological fields, which are currently overwhelmingly dominated by men.  We recommend checking them out and possibly tossing a buck or two their way. Girls Who Code. 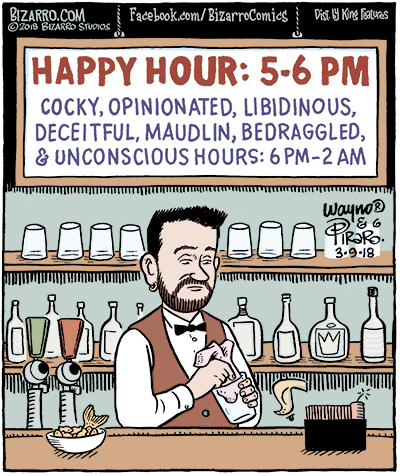 I prefer to participate in happy hour at home where the drinks are even cheaper and the atmosphere makes me a lot happier.  And yes, after the initial hour, I become all of those other things listed on the sign. Just don’t drop by my house unannounced after a certain time, that’s all I’m saying. 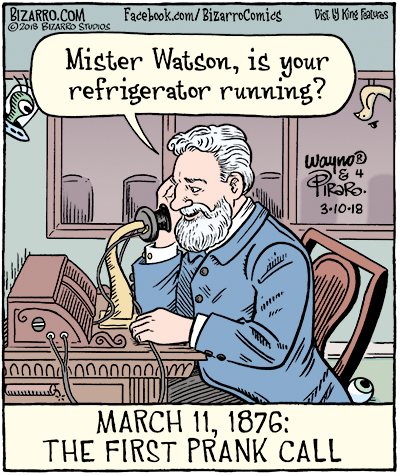 “Watson! We’ve invented something that will one day be used to take pictures of every plate of food we eat.”

“Hmm. It’s hard to imagine anyone wanting to do that, but okay. Whatever.”

Even so, here we are a hundred-and-some years later with phones that take pictures, answer questions, promote fake news, rig elections in favor of our enemies and a thousand other things. And yet, most of the time, the reception on actual phone calls isn’t any better than Bell’s prototype. (sigh)

Until next week, my precious Jazz Pickles––be happy, be smart, be nice, and resist ignorance and fascism. And while we’re at it, our official Bizarro Jazz Pickle enamel pin is BACK IN STOCK after the initial batch sold out! Grab one now before it sells out again!