Purim Some Wine: A Charming-Yet-Infrequent Newsletter 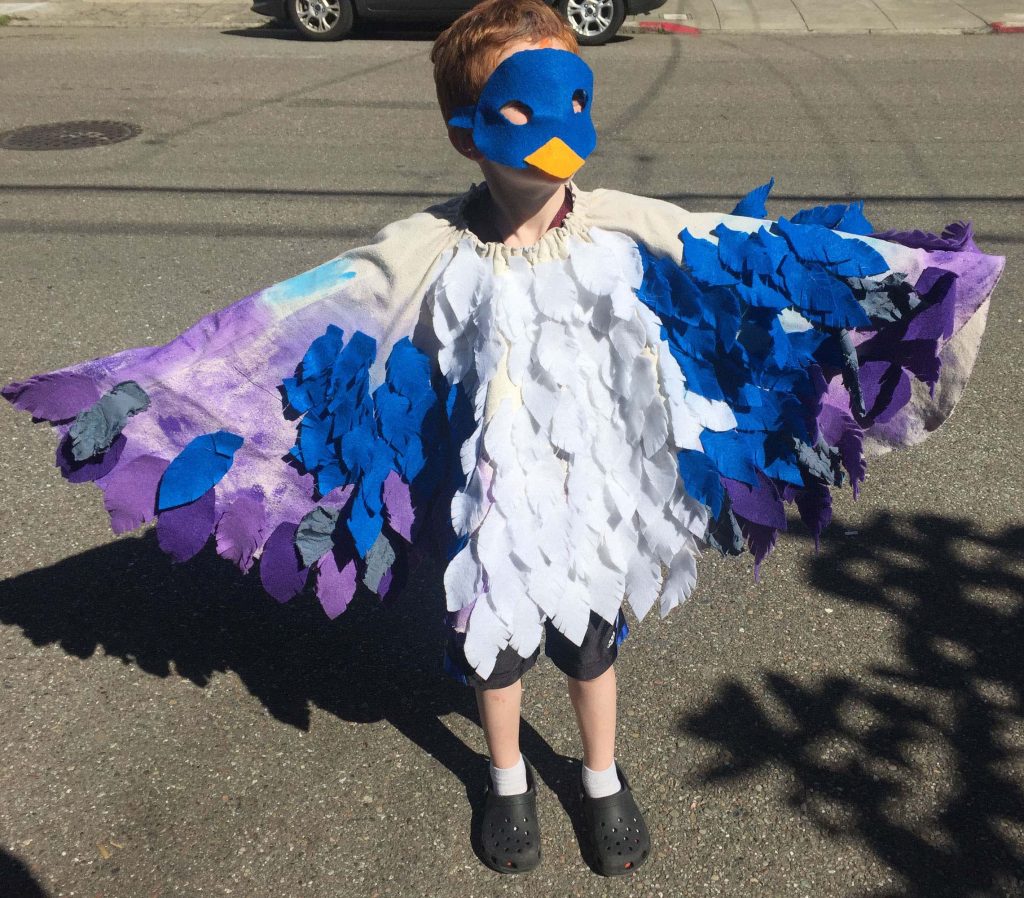 A few days ago was Purim, the Jewish holiday where you dress up in your favorite king/queen/bad guy outfit to celebrate a story that reads like a Shakespeare play.  My summary below:

A queen is killed, a new queen found, the King’s right hand man wants the King to kill all the Jews because he hates this one guy.  But the new queen is secretly Jewish, and the hated guy is actually her uncle, and she tells the King, who concurrently finds out the hated guy saved the king from a murder plot,  and on the day the hated-but-good guy is supposed to be hanged, the right hand man gets hanged instead.

My three favorite things about this holiday:

1.The Fanfare:  I love kids in costumes.  When I was a kid, you came as one of the characters.  It’s since expanded.  Meet my friend Ari, as The Purimium Falcon…

2.  The food:  DELICIOUS triangle-shaped cookies called Hamantaschen that my mom (aka The Notorious B.U.Z.) just sent in the mail.  The right hand man’s name was Haman, and the word “taschen” means either ears or pockets, depending on who you ask. 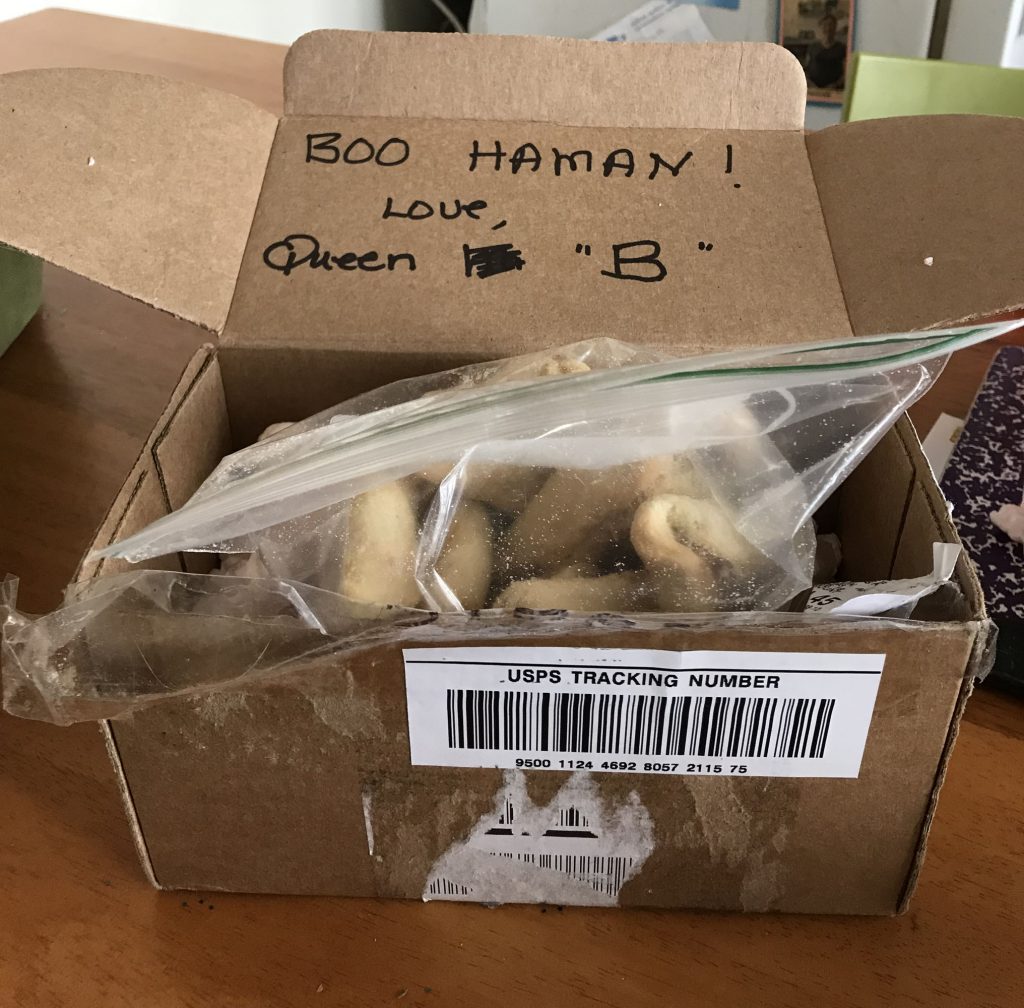 3. The Drink:  Purim is a drinking holiday.  While the story’s read aloud, you swill wine and boo when the bad guy Haman’s name comes up, and cheer when the good guy’s name (Mordecai) comes up.  The point is to get so drunk you can’t tell one from the other.  Actually, that’s not the point– the point is to know what it feels like to have such impaired judgement that you can’t distinguish good leaders from bad.

Speaking of Purim, I’ll be talking about cartooning and being Jewish at my…

TALK AT THE JEWISH COMMUNITY LIBRARY IN SF WED MARCH 14 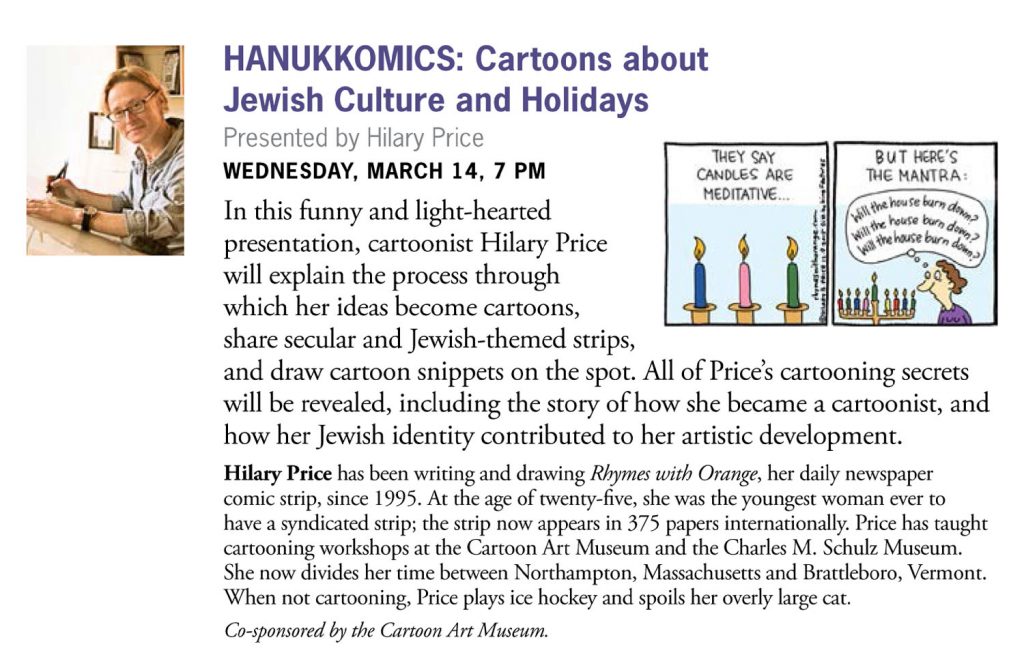 Please come, and Invite your friends with this Facebook event page:

Sadly, I didn’t actually partake in a Purim party.  I was at the sports medicine doctor.

Rewind to February school break: Kristin and I went to visit crackerjack political cartoonist Jen Sorensen and her spouse in the Rockies.

We worked, skied, ate and watched the Olympics.

The Parkland School shooting had happened.  Here’s Jen’s cartoon for that week. (Used with her permission.)  She was also a guest RWO cartoonist back in 2011. 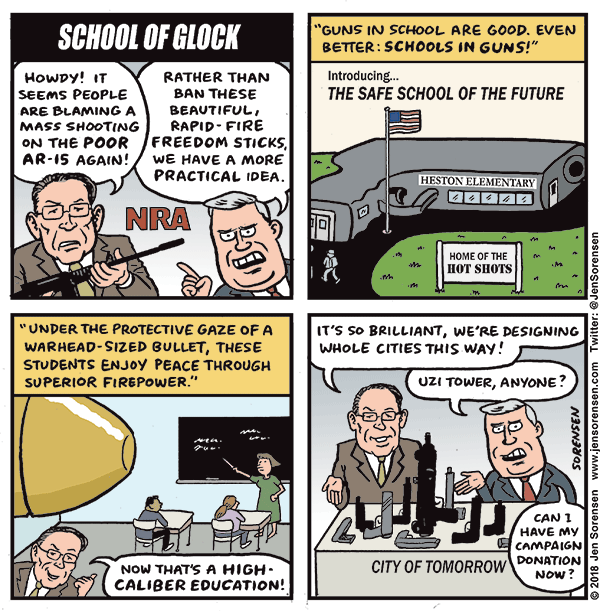 To deal with our sorrow and get some fresh mountain air, I decided to literally go for air while downhill skiing.  Then I landed wrong. And my Pyeongchang Olympic freestyle competition fantasy dreams also landed wrong.  So the knee is in a brace.

Fast forward to a few days ago:   I went in for an MRI, except that’s not what I said to the receptionist.  Instead I said: “I’m here to get an IUD for my knee.” 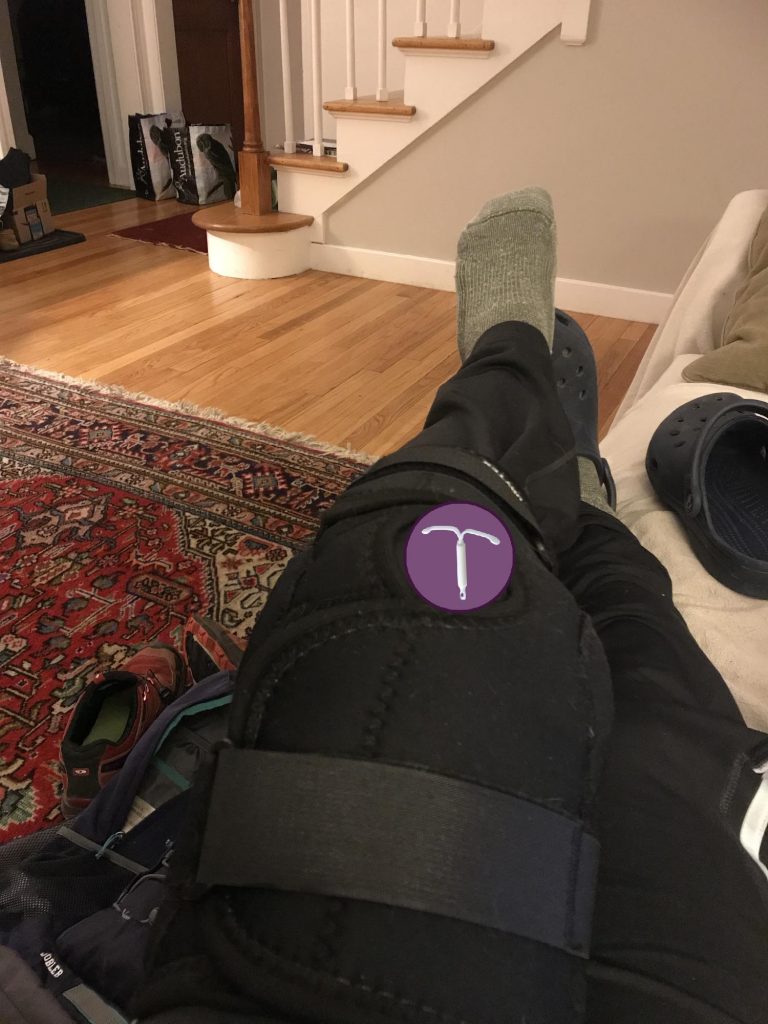 If you haven’t gotten an MRI, the machine looks like a giant toilet paper roll, and you’re the toilet paper rod inserted into the center of it. You’re supposed to lie very still while the machine takes pictures while making loud clanging noises, like radiator pipes.    They give you headphones to wear and a choice of music.  That turned out to be the most painful part, because I chose classical, and it was wretched.  Oh, and I did bleed a little…from my face.  Because my cheek started to itch while I lay motionless, and then when I could finally move, well, there went the scab.

That’s my plan for May 12-13 as a guest at the Toronto Festival of Comic Arts!

I’ll be sharing the stage with my awesome collaborator Rina Piccolo as we discuss our first year together. Fittingly, the paper anniversary! Details to come. 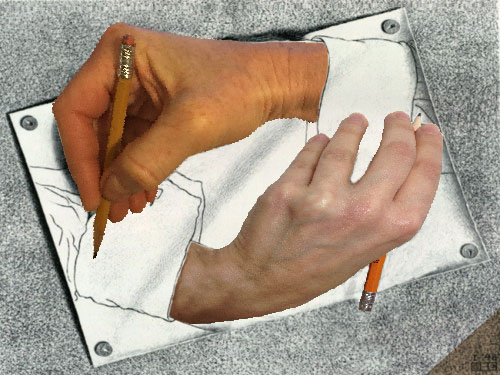 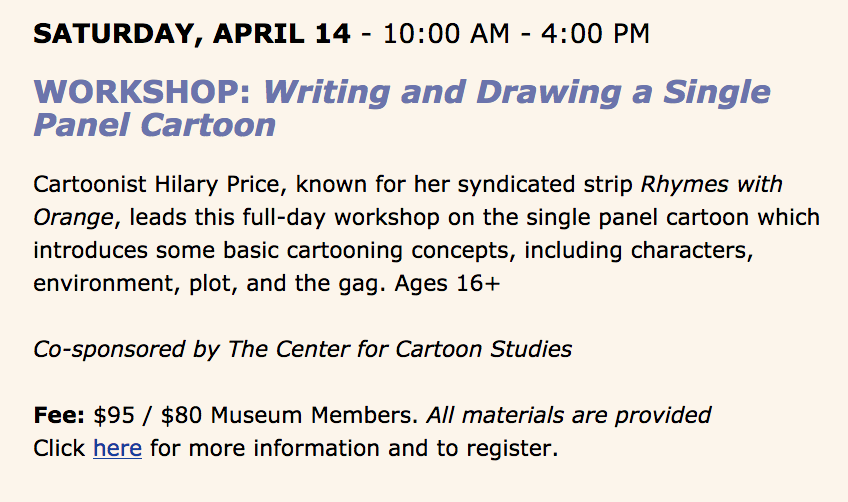 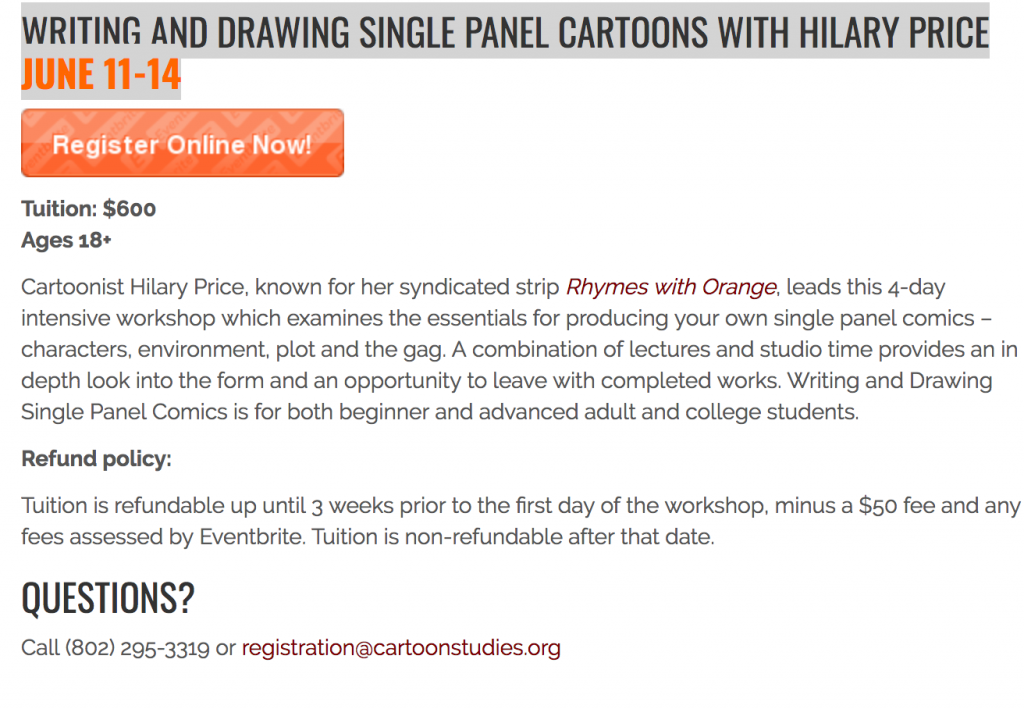 THE DL ON THE LOC

I went to the Library of Congress in DC to see a RWO strip in the current exhibit on Women in Illustration. That was neat.  What was also neat was the nearby exhibition of courtroom artists. 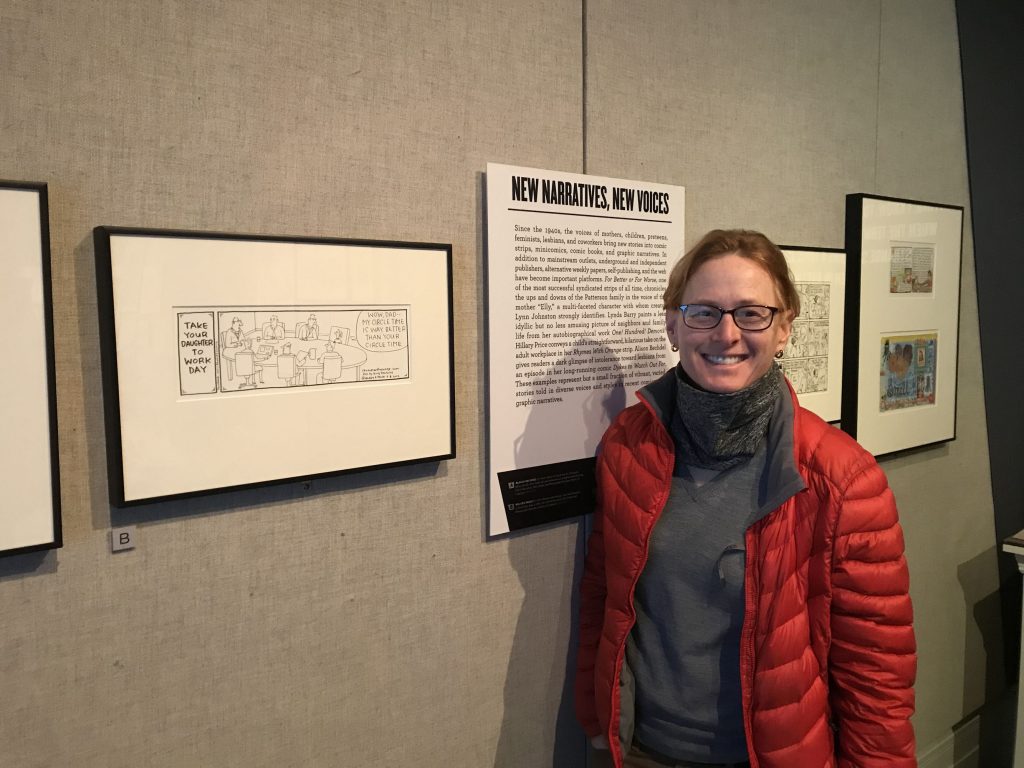 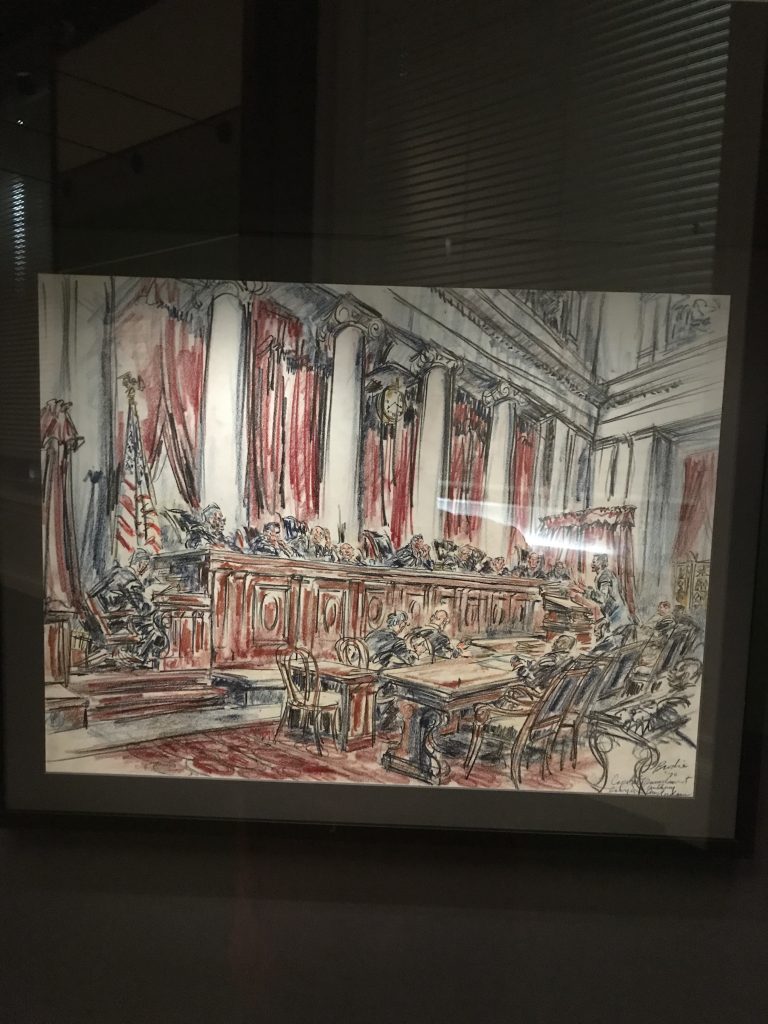 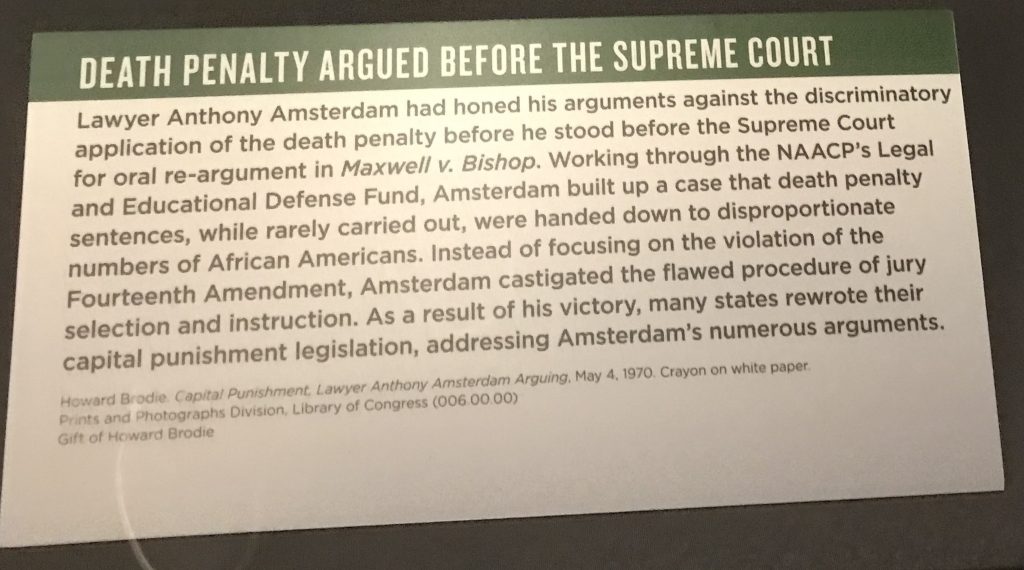 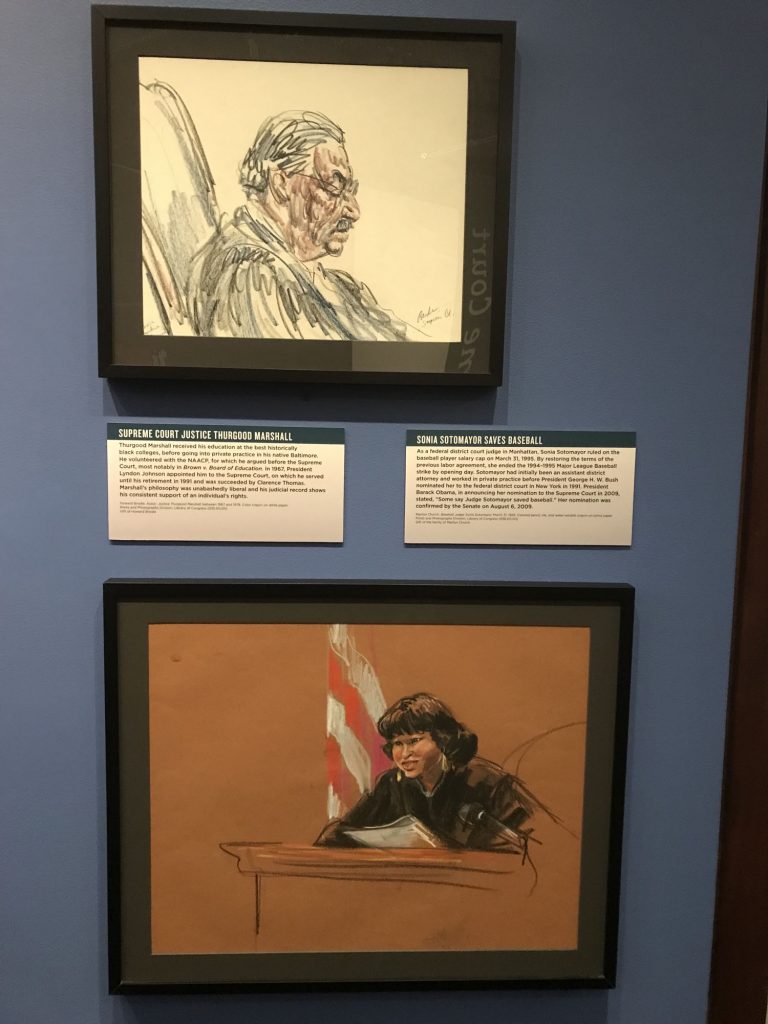 Get this– Kristin’s brother and his pals all pitched in and got their other buddy a courtroom sketch artist for his wedding!

So that wraps it up–thanks for tuning in to the Charming-Yet-Infrequent Newsletter!