(Just as with actual therapy, you can embiggenate this scene by clicking the shrink’s pipe.) 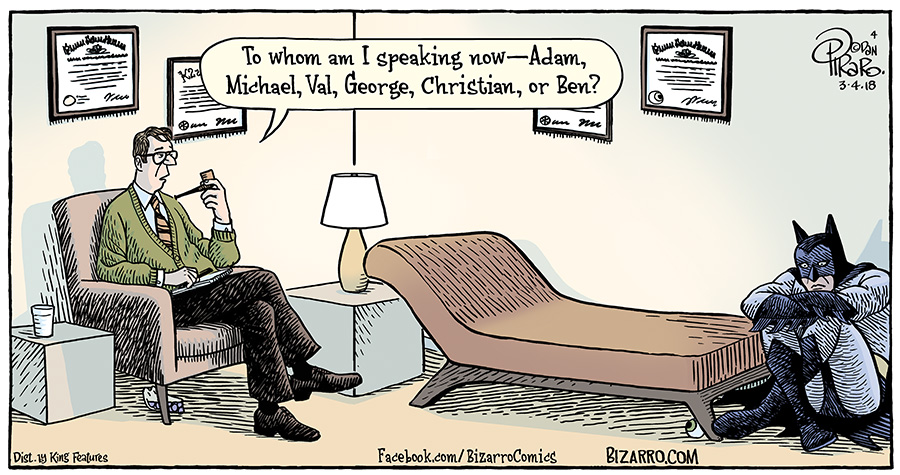 Bizarro is brought to you today by The Glamour of Hollywood.

Tonight is the 90th Acadamy Awards and this seems an appropriate cartoon for the occasion. Batman has been played by many actors over the years but here we are finally given a glimpse of the toll that how being inhabited by so many personalities has taken on him.

But at least his personalities behave more-or-less the same and are therefore more predictable. Most people with multiple personality disorder have to deal with vastly different types of personalities that pull them in drastically different directions: male, female, adult, child, honest, criminal, peaceful, violent, mensch, hell raiser, etc.  I learned all of this from a TV series that used to be on Showtime called United States of Tara, and TV wouldn’t lie.

Before we check out what Wayno was up to this week, here are a couple bits of hate mail I received this week that I thought you might find entertaining.

I posted the following cartoon on FB and Instagram on “Throwback Thursday,” which is one of those meaningless hashtags that gives people an excuse to spend more time on the Internet instead of living their actual lives. 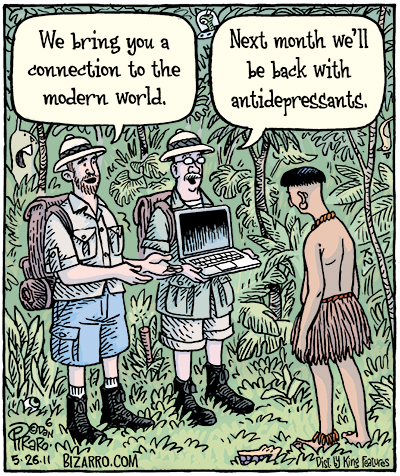 It was a popular post by Bizarro standards and the vast majority of people understood what I was getting at and left positive responses. I got a quite a few comments like this one, however:

“You know depression is an actual mental disorder that doesn’t fucking show up from technology and doesn’t go away if you go back to nature or some shit but yeah just say this garbage. Antidepressants can be abused but for some people they’re the best method of treatment.”

My response: “I have been chronically depressed since I was 18 years old and spent over 19 years on antidepressants. Humor is one of the things that keeps people like me from jumping off a bridge. I’ve found that laughing at yourself is much more beneficial than crying victim.”

Not the perfect response, granted, but my point is that having a sense of humor about your problems goes a lot further than screaming that you’re a victim every time someone says or does something that doesn’t perfectly validate your worldview. Plus, the cartoon is not saying “technology” per se is the problem. It’s the unnatural mess we’ve made of the modern world that these explorers are exposing the jungle inhabitant to and that’s enough to depress anyone.

On a side note, researchers are finding that excessive time spent with electronic devices at the expense of human interaction decrease one’s sense of happiness. Researchers have also found that time spent in nature increases one’s serotonin. I have personally found these things to be true for me. So, yes, technology is part of the problem after all.

Another bit of hate mail came in from an old FB post of the following cartoon. 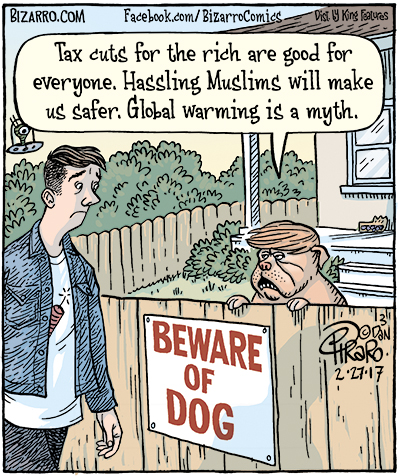 The comment I refer to was this: “By all means, let’s let them rape and behead us, and then make sure to thank them. Because we wouldn’t want to hassle them. For fucksake ”   (lack of punctuation is his)

My response: “You make a lot of sense. If you’ll let me know your ethnicity and your religious beliefs, I’ll be happy to persecute you based on crimes committed by people of a similar background. ‘For fucksake,’ of course.”

I don’t need to explain this to people capable of understanding it. As long as there are fear-based bigots in the world and folks like the Russians and Fox News Channel to feed them fake news about how we need big guns and authoritarian daddy figures to protect us, this problem will not go away.

Now let’s see what Wayno was up to this week… 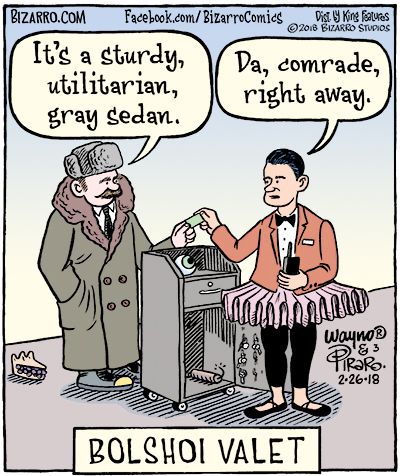 Russians who are engaged in activities other than swaying American elections to favor the Kremlin are always funny.

By the way, Wayno assured me that this parking attendant is wearing woolen tights and a flannel dance belt because the weather in Moscow can turn a ballerino into a ballerina alarmingly quickly. On his blog post this week, he includes a rough sketch of this cartoon and some info about where he originally wanted to go with it but didn’t and why. A link to his blog is at the bottom of this post. 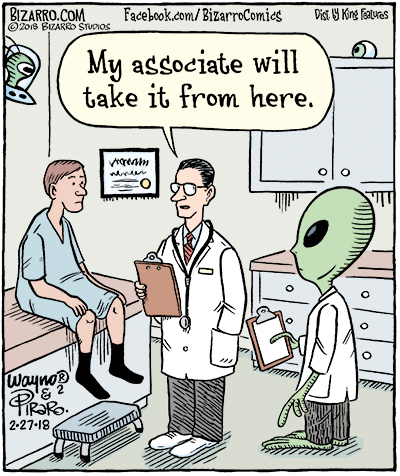 This is one of the very few situations in which you can pay a relative stranger to insert their finger into your rectum without breaking any laws. “He told me he was an internist, officer. Honest!”

Here’s a sketch for a prostate exam cartoon of mine that was too racy for newspapers so it was rejected for print. This is the first time it has ever been seen by the public!! 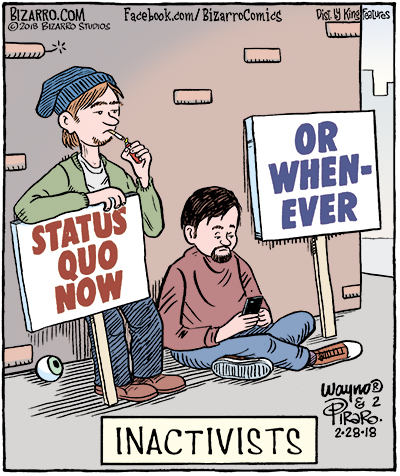 We submitted this cartoon many weeks ago, long before the latest school massacre in Florida, but it became an accidentally timely comic considering the heroic protests that teenagers all over America have been engaged in against the irrational and fearful proponents of nearly unregulated gun sales. Let’s call the cowards in the NRA what they are: scaredy cats with masculinity issues. And let’s call the politicians in their pockets what they are: greedy assholes who care more about power and money than keeping their countrymen safe. (Of course, that also perfectly describes the Cheeto in Chief so I don’t expect meaningful changes anytime soon.)

More importantly, why is the U.S. the only country where this routinely happens? Until we answer this question, even gun control won’t stop it.

I carry my own blood everywhere I go in my handy, portable, temperature-controlled blood bag. I call it my body.

This is the second time in ten days that Waldo has appeared in Bizarro and on Wayno’s blog post this week he discusses the behind-the-scenes-professional-cartoonist insider info that explains how that happened. The link to his blog post for this week is below.

Thanks so much for joining us this week, Jazz Pickles! Please check out a few of the links below that help support our cartooning efforts. We at Rancho Bizarro will toast you with one of our hourly, ceremonial tequila shots.

Until next week––be happy, be smart, be nice, and resist ignorance and fascism.