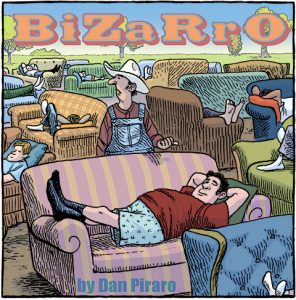 (To embiggenate, click on any foot or piece of footwear within any image.) 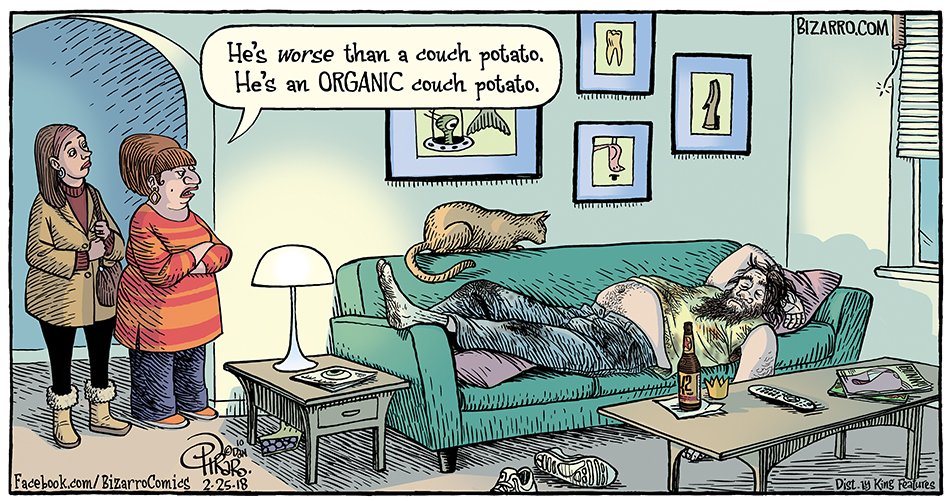 Bizarro is brought to you today by What’s In That Pipe, George?

It’s a fun day for Bizarro Jazz Pickles. Not only are there TEN Secret Symbols to find in today’s comic (click it to embiggenate it and begin your search!) but I’ve created a fun, new T-shirt design that I think those of you with a touch of social courage and a certain opinion of overly-used, overly-cute images will enjoy tremendously. 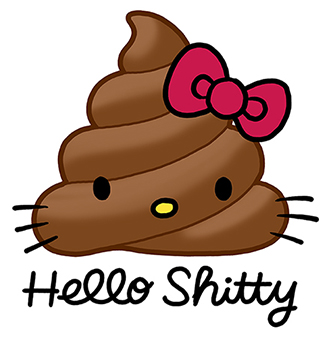 If it sells okay as a T-shirt, we’re going to make a lapel pin out of it.  (Here are the enamel pins I’m currently offering as of the date of this post. Go to the shop’s homepage to find them for sale individually.) Lots of folks have been asking for specific images of mine on enamel pins (most frequently the pie, the eyeball, and the green alien but one guy wanted a pin of his own gallbladder) and here’s the deal about that: With shirts and totes and mugs, I can use a print-on-demand service that doesn’t cost me anything in inventory because nothing gets made before it is ordered, and the company handles the shipping. With pins, I have to shell out the bucks to manufacture them and then mail each order myself or hire someone to mail them out. (My daughters, the K2, are handling that part for now.) So it’s a big risk and one that I can’t afford to take without some assurance they will sell. The bottom line is if the first four sell okay, we’ll add the pie, the eyeball, and the green alien in the next group. (We will likely never add that one guy’s gallbladder.) Stay tuned and share the link with your friends who might be interested in pins! 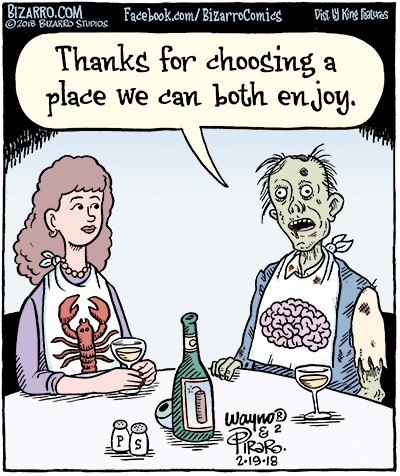 I like restaurants that treat adults like babies. I like them so much, in fact, that I won’t go to a restaurant that does not offer a plastic bib emblazoned with a picture of the exact thing I intend to order. If they don’t have them, I bring my own. I start out with a bib with a glass of water on it and move on from there. 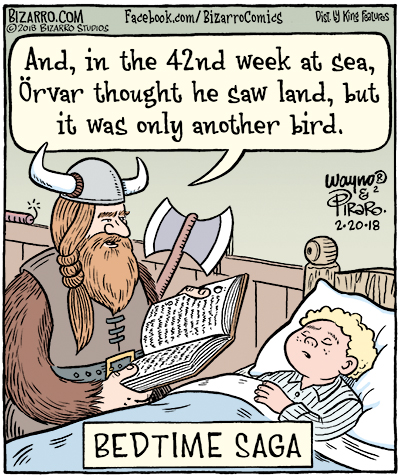 Historical Alternative Fact: Vikings didn’t always just attack a village––burning, raping, and pillaging. Sometimes they’d read a Viking saga aloud through a bullhorn until the whole town fell asleep, and then quietly burn, rape, pillage and sneak off without waking anyone. ( I can relate because I once fell asleep in the first two minutes of America’s Got Talent and woke up feeling pillaged.) 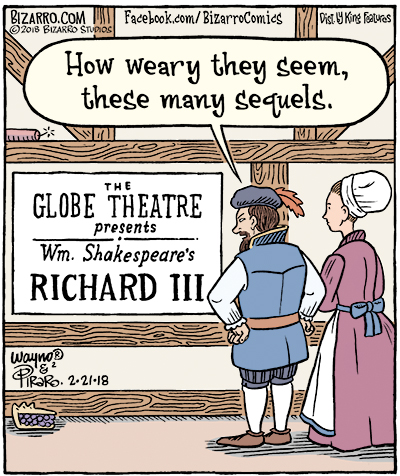 This is very likely why Shakespeare’s Richard XXV closed after only one night. That, and the fact that characters playing close friends and family called him “King Dick” and the audience kept giggling. 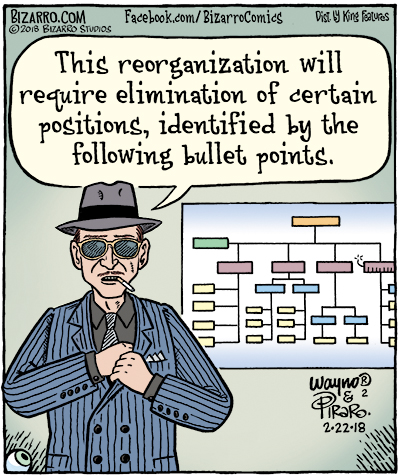 Predictably, I got a complaint about this one from an organization of men who wear pinstriped suits and resent being associated with mobsters. I also got an avalanche of angry mail from Republican politicians who don’t like the word “bullets” being used for non-violent purposes.

On a related side note, I have so much to say about gun violence in the U.S. that I don’t feel I can even begin without this blog becoming a forty-page screed. Instead, I’ll just include this headline from the satirical newspaper The Onion, which I think says an enormous amount: “‘No Way To Prevent This’ Says Only Country Where This Regularly Happens.” 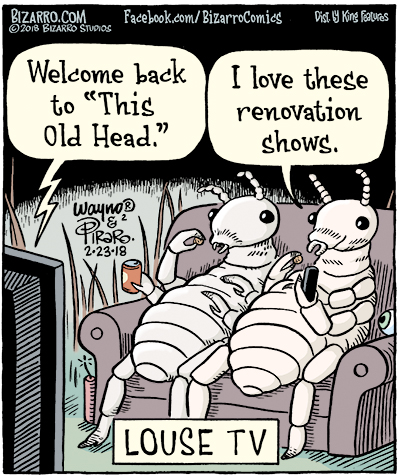 I successfully got rid of my head lice, it was the tiny furniture that was a pain to get untangled from my hair.

By the way, did you know that we have lice to thank for the words “lousy” and “nitpicking”? (This has been the educational portion of my post. We return now to juvenile chuckles and civil-war-inciting political commentary.) 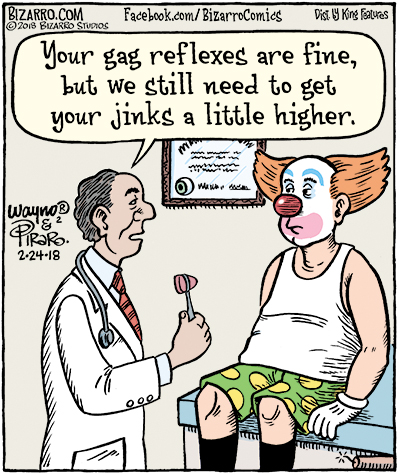 Can’t help but wonder if he checked his gag reflex by shoving that rubber hammer thing down his throat. I check my gag reflex by turning on Fox and Friends or simply allowing it to cross my mind that Americans have turned their country over to an unprecedented gang of greedy, corrupt, lying cowards.

Thanks for coming along this far, Jazz Pickles! We adore your company.  Don’t miss Wayno’s (much more brief) blog this week. He adds some fun comments about the week’s cartoons as well as a bonus section at the end about music and design and some books he’s reading lately. We at Bizarro Enterprises (Rancho Bizarro in Mexico and Bizarro Studios North in Pittsburgh) always go the extra mile to seem to appear to be well educated in the liberal arts.) And please don’t miss my new shop as well as the other links below. It takes a village to keep a couple of cartoonists in business!