There’s Something Out There…

My Six Chix cartoon for today (1/27/18) features a UFO alien. Years ago, I was standing in the parking lot of Boston Chicken with family and friends and looked up and saw this white light that seemed to be hovering and then shot straight up and disappeared! When I said “Did you see that???” no one else did… so I decided to do some research. I contacted an organization called Boston MUFON (Mutual UFO Network) and spoke with a gentleman who first said “Would you consent to being hypnotized?” “Um… no!” I replied. So then he said the military had new air thingys that could approximate a UFO and that was probably what it was.
I ended up joining the local MUFON so I could sell the UFO tees and other things I was inspired to create at the conferences and they were fascinating and a lot of fun and I sold a LOT of tees and things. As a result, I’ve continued to add the “aliens” to my cartoons and they’ve featured throughout my Six Chix work and other work over the years! 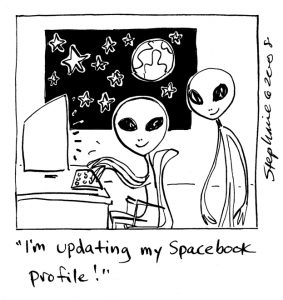