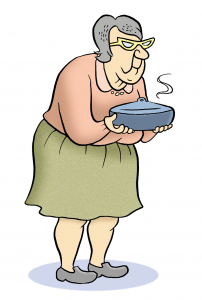 It’s been a good run, Sophie.

You may ask: why oh why did I kill off that sweet-and-salty, adorable kvetcher? Well, simply put…it was time.

Sophie was modeled (loosely) after my husband’s late grandmother. On one hand, she could be very sweet. On the other, she had a habit of nitpicking me behind my back. It was clear that I did not measure up to her domestic standards. I didn’t cook enough, I worked too much, etc. Basically, she was the stereotypical mother-in-law I never had (my actual MIL is low maintenance).

My ultimate revenge was to turn this woman into a cartoon character.

Writing for Sophie, however, was a joy. She was a little one-dimensional at first, but I like to think I rounded out her personality over the years. Like my real GIL, she had two dominant sides: the worrier and the complainer. Often they overlapped.

But, really, both were sweet at heart and only wanted the very best for their loved ones. In my GIL’s case, she lost most of her immediate family in the Holocaust. So no one could really blame her for that whole worrywart thing.

As you may know, much of my writing reflects my life. Not necessarily anything verbatim, just the typical day-to-day stuff. And if you’re a regular reader, you also know that my characters age in real time. So having a strip that has roots in reality and where people age…well, it makes sense that people also eventually die (don’t worry, no plans for anyone else…yet).

So that’s the long and short of it. It was Sophie’s time, simply put. She will be back in memories and flashbacks, I’m sure.

In the meantime, I thought it would be fitting to eulogize Sophie in pictorial format. Below are some of my favorite Sophie strips spanning the years.