I Resolve to Make Mistakes. 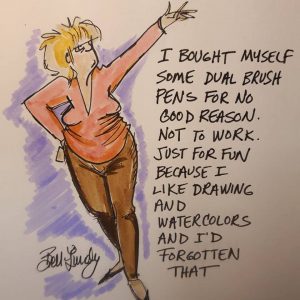 I’ve decided I’m going to try and make as many mistakes as I can this year. For me, this basically translates as “stop second-guessing and just do it for Pete’s sake.” I can’t tell you how many times I’ve been so excited about doing some new project or experimenting with some new idea only to decide it’s stupid. And then do nothing.

I started this resolution before Christmas while I was out shopping for some art supplies and came across some markers. I love watercolor and I’ve dabbled in it but I wouldn’t say I’m particularly good at it…I just like it. But I thought I’d buy myself the markers to try as a quicker way of imitating a watercolor look. I loved it.

So I posted it on my instagram account and got the most likes I’ve ever had. Did my world change? No. But instead of thinking I’d like to mess around with some watercolors sometime, I actually went out and did it. (Okay, it’s not actual watercolor but whatever. I don’t have to explain. That’s kinda the point.) 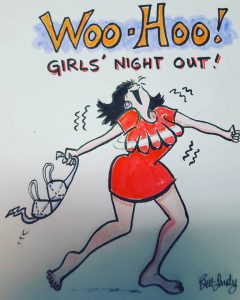 I’ve also agreed to visit a school and show the students my process in a few weeks. When the teacher asked if I would come and I was wondering if I had the time, my daughter said, “Go ahead mom, it’s good to do some community service.” And I thought okay, I will this time. So I am.

So that’s my resolution. I’m going to make a lot of mistakes this year. Or do a lot of different things that I don’t normally do. And if something comes of it, great and if not…that’s great too. Mainly I want to break this habit of being afraid that some things I want to do are not good enough. Good enough for who? Right?

And Happy New Year to you!