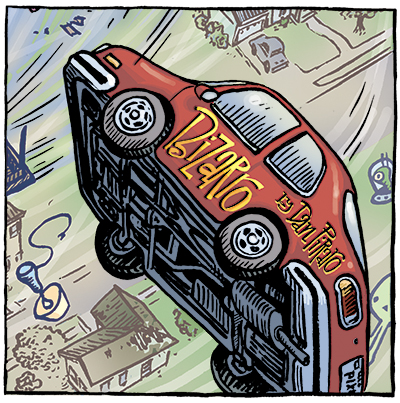 (One click of the stack of tires gets you an embiggenated view of Carl’s congregation.) 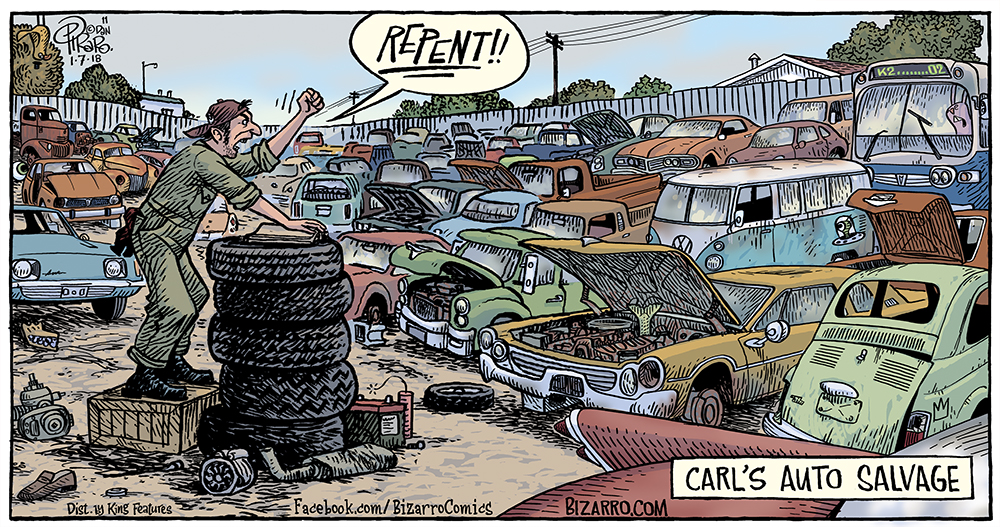 Bizarro is brought to you today by The Eyeball of Observation Spotted In My Neighborhood.

As I announced in last week’s cartoon rundown, I’ve just recently turned over my Monday-through-Saturday cartoons to my good friend and talented colleague, Wayno. He previously had a feature on GoComics called “WaynoVision,” which he retired to concentrate on Bizarro, but the archives are still viewable. The link to those is at the end of this post.

I’ll still be doing Bizarro Sunday cartoons for the foreseeable future, however, and the one above was a lot of fun to draw. The reason so many of my cartoons are so outrageously detailed is that I’ve always wanted to be a painter of fine art but didn’t know how to make a living at it. In my twenties, I stumbled into advertising illustration (better than shoveling animal dung at the circus, but only barely) and then syndicated cartooning, which was far better than advertising but still wasn’t fine art. A combination of those two jobs kept my family and me eating regularly and sleeping indoors, and I am very grateful for that, but my heart has been waiting to paint for over three decades, and that’s what I’m spending most days doing now.

As I did last week, I’d like to share a detail of the painting that I’m currently working on. It isn’t even close to being finished yet and a lot of depth and detail will be added, but I thought some of you might enjoy a peek at the process. First, look at the section I posted in last week’s blog here. Now see how far I’ve come this week here. Words cannot express how much fun I’m having.

On to Wayno’s excellent week of cartoon shenanigans:

Bigfoot has been a recurring character in Bizarro and Wayno has used him a number of times in his cartooning career, too. Here’s one that Wayno wrote and I drew five years ago. Of course, a lot of people (even some Bizarro readers!) believe Bigfoot is not mythical at all, just very good at not getting photographed or leaving a shred of DNA evidence behind as all 800 lbs. of him bumbles through forests eating, sleeping, and pooping everywhere from Mexico to the Arctic Circle. And that’s fine. After all, some legitimate science started out as pseudoscience, so who knows? A perfect example would be Donald Trump’s hair, once thought to be Tribble.

And here is some fun with Bigfoot that you can introduce to your real life. 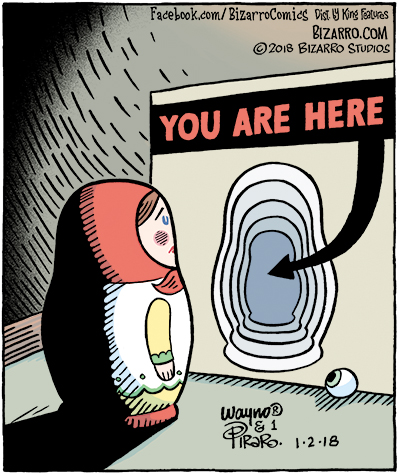 My friend, Doug, says he hates Matryoshka dolls because they are full of themselves. 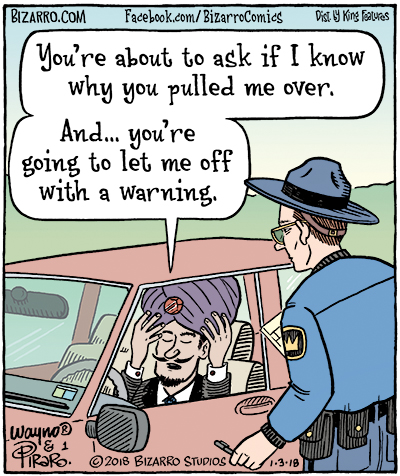 I happen to know that Wayno––who never texts but often wears a blindfold while driving–– carries a large, bejeweled turban in his car in case he gets pulled over. So far, he’s not succeeded at avoiding a single ticket but he has been shot at twice. 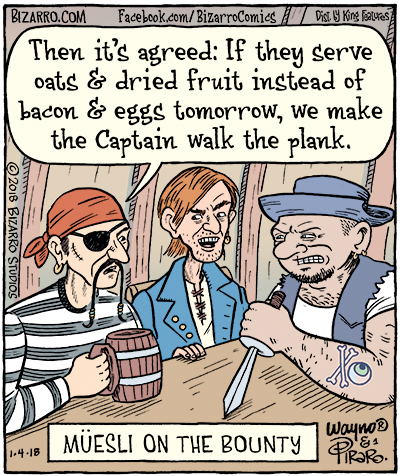 Little known historical alternative fact: Many pirate ships served Hostess Twinkies and Snowballs for breakfast because they could easily endure a several-years-long journey without spoiling. 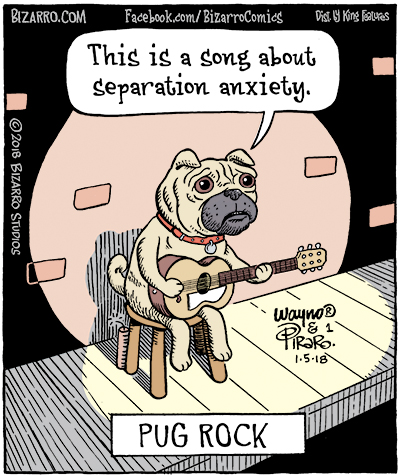 Wayno says in his blog post this week that this is his favorite cartoon of the batch. He claims it is because he likes dogs but I suspect it is because, unbeknownst to even his closest friends, he was a roadie for The Sex Pistols in the 70s and still has a thing for punk rock. He lasted through most of their American tour but was forced to drop out near the end after a bite that Sid Vicious gave him on the upper thigh became dangerously infected. The Sex Pistols used to lose a lot of roadies that way. 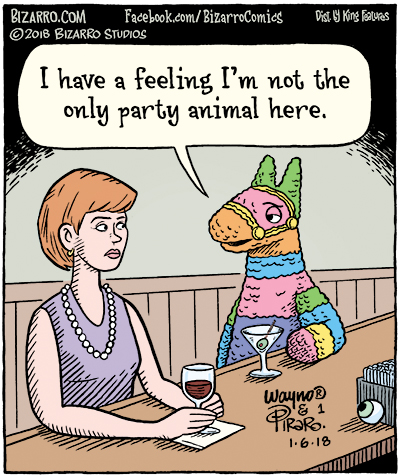 This gag saw several iterations before we settled on this one. We tossed the caption back and forth for a few days and eventually came up with one that we loved, but our editors said was too racy for newspapers. We knew that was going to happen, but we tried to squeeze it past them anyway. Wayno posted on his blog the sketch of the one we wanted that didn’t get published. Go here to see the original caption (at the bottom of his post.) But only if you’re not upset by adult content.

That’s the rundown for this week, Jazz Pickles. Thanks for reading this far. Below are some important links to Wayno’s various social media sites and some stuff I want you to know about, too!