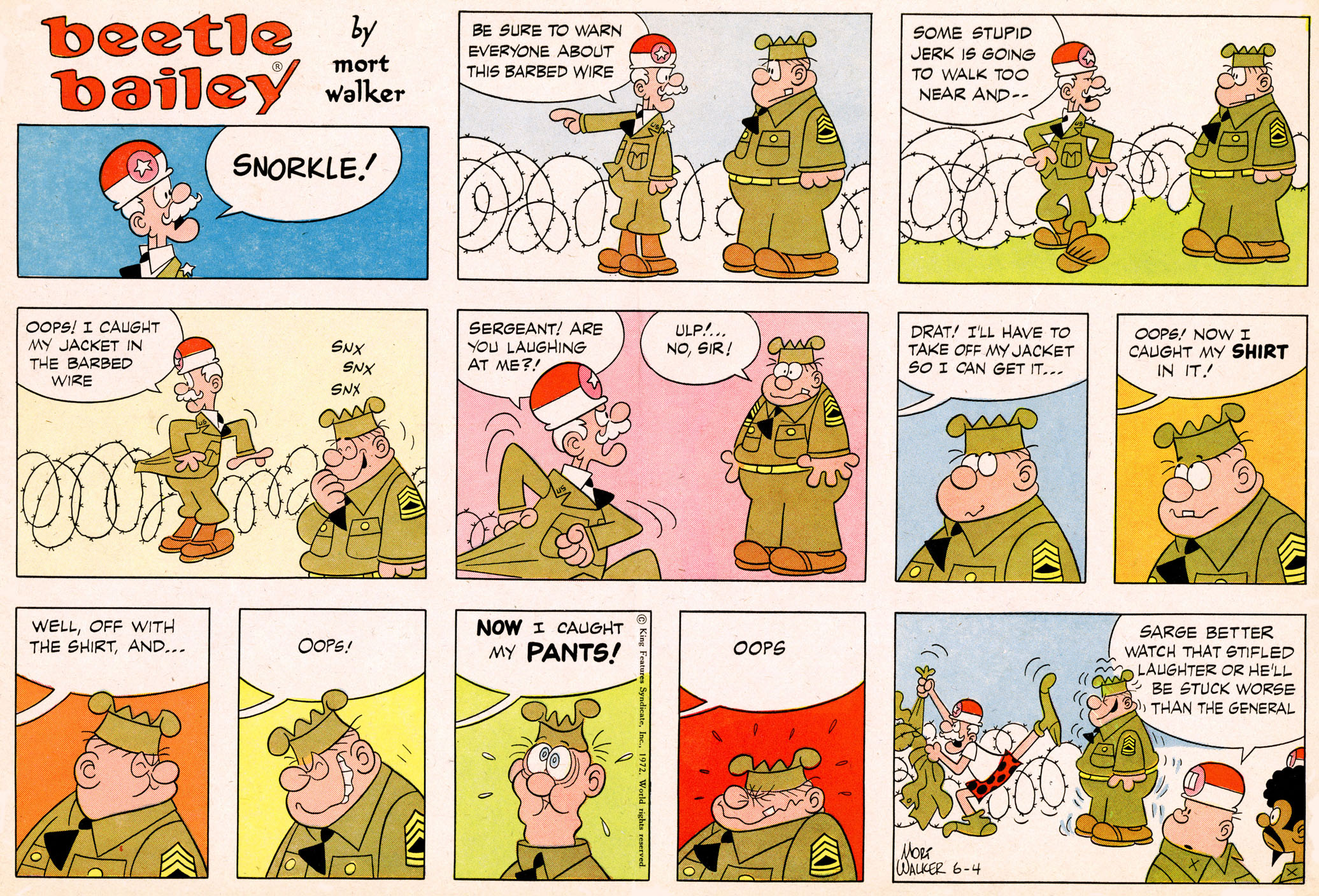 Comics historian and critic R.C. Harvey has written an excellent assessment of the Mort Walker studio style. The following is an excerpt from his definitive book, The Art of the Funnies, first published in 1994.

“By the late fifties and early sixties,” Harvey begins, “Walker’s patented stylized forms had emerged. Not since Cliff Sterrett surrealized human anatomy in the futuristic manner have we had such charming comic abstractions of the human form. The simplest shapes suggest human dimensions. Beetle’s head is a cantaloupe; Sarge’s, a giant pear. Upon these pulpy craniums, Walker’s grafts billiard balls for noses. Bodies in repose hang limply from these heads like uninhabited suits of clothes weighted to the ground by monster shoes (not feet), and hands are doughy wads, dangling at the ends of empty sleeves. Clothing shows no wrinkles: sleeves and pantlegs are simple geometric shapes vaguely approximating arms and legs.”

The Sunday page above demonstrates another Harvey observation. “Anatomy is wonderfully elastic in Walker’s hands. A bent arm or leg is longer than when the limb is straight (you need length to show a bend). The illusion of the body in motion is achieved by means of a carefully orchestrated series of wild distortions. A person walking has only one leg—the one in front, which trails a second foot behind as if it were growing out of the lead leg’s ankle. Running figures are all elbows and knees, perfect comic abstractions. The flexibility of Walker’s abstracted simplicity is capable of extreme exaggeration for comic effect. Indeed, much of the humor in many strips arises from the antic visuals as much as from the situation depicted.”

Harvey concludes his appreciation of Mort Walker’s artistry, saying “The fact is that the drawings are the way they are so that the visuals will be funny. The pictures help the words achieve comedy by blending the visual and the verbal. But the pictures are comic in themselves, too, art works of hilarious imagery.”

Stay tooned for more classic episodes from the Beetle Bailey archives in our Timeline series.