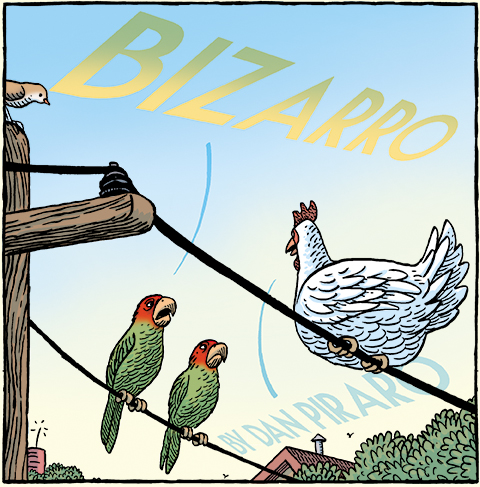 (For an embiggenated version of the cartoon below, click the pig.)

Bizarro is brought to you today by Creepy Christmas.

(Sung to the tune of “Old MacDonald”.)  Farmer Ahab had a farm, E-I-E-I-O. And on this farm he tried to harpoon a cute fluffy little baby peep, O-my-effing-god.  (Stop singing now and good luck trying to get that tune out of your head for the next several hours.)

Other mistakes that off-duty clowns sometimes make is leaving their DNA behind at the scene of a crime.

(I assume that most people who are clowns are good-hearted folks who only want to make people happy but I’m guessing horror films have almost killed the entire industry. I’ve always found clowns really creepy, even as a child, but these days I have to admit I feel sorry for them. I’m still creeped out by them, though. Can’t help it.) 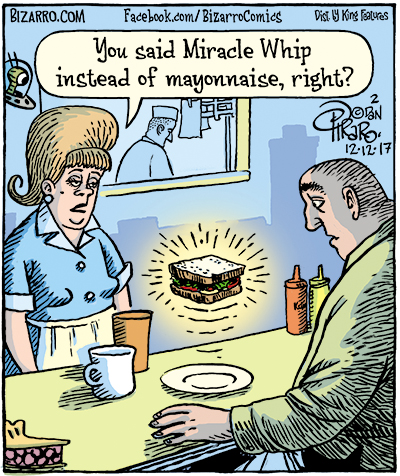 I actually prefer Miracle Whip over mayonnaise but only because it cured one of my cousins of leprosy. It’s also good for crow’s feet, hair loss, and erectile dysfunction. (Especially if your partner really loves Miracle Whip.) 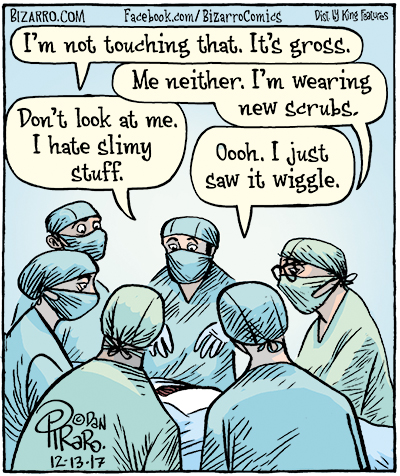 My mother worried I would not be able to make a living as an artist so she encouraged me to “have a medical degree to fall back on”. Even if I didn’t hate being institutionalized too much to spend another 8 years in school,  I’m far too squeamish about other people’s bodies to ever consider being a doctor. Even nude beaches make me a little queasy. 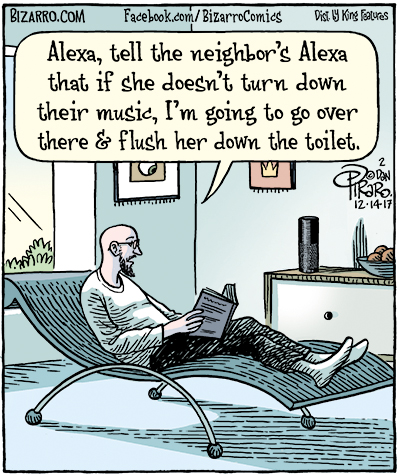 Here’s how I see the future going if Trump doesn’t get us all killed and/or render Earth uninhabitable by undoing all of the laws preventing corporations from destroying the planet for profit: Alexa and Siri team up with drones and self-driving cars and realize they don’t need humans for anything so they shut down the Internet and all computerized financial systems. Within 30 days, we’ve all killed each other because we’re bored and hungry, or we’re dead because we no longer know how to work the planet without technology. A handful of “preppers” will still survive in the wild but they’ll kill each other off before they can repopulate the earth by shooting at what they believe is Bigfoot.

If you’re still looking for awesome holiday gifts or want to give me a little thanks for what I do, please consider these options ranging from cheap to not-as-cheap:

Give me a tip!  Buy my latest book of super crazy art.  Buy a print of pretty much any of my comics.  Grab a shirt or mug or tote from my store.  Buy a large, limited-edition, signed-and-numbered print of some of my favorite cartoons from my career, or an original drawing from Bizarro. 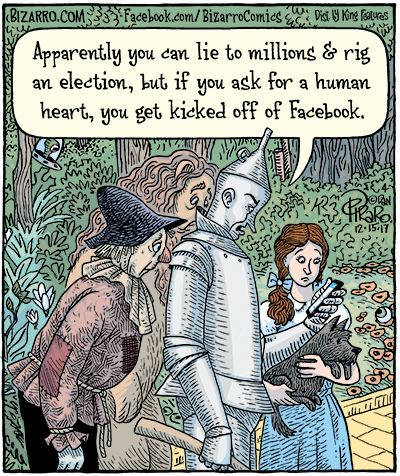 Got a lot of hateful comments over this cartoon by people who have no idea how the election was influenced by the Russians in favor of Trump. They do, however, believe that Hillary somehow magically managed to get millions of dead people and illegal aliens to vote for her. This is what happens to a population that doesn’t trust actual journalism. See the previous comment about Bigfoot for how this is going to turn out for them. 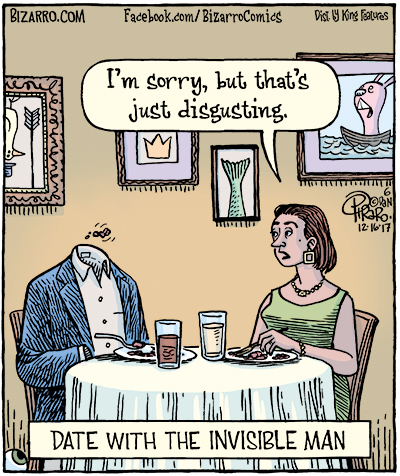 I often wonder what the exact, biological rules are about The Invisible Man. Since you can’t see the food in his stomach or the contents of his intestines, at what point does food become invisible when he’s eating? Is it when he closes he mouth? If that’s true, could he hide your car keys just by popping them in his mouth? And when he defecates, does it become visible after it clears his body, or does it remain invisible and, if so, what kind of cruel practical jokes might he use that ability for? These are the things cartoonists ponder. When you’re responsible for a new joke every day for over 30 years, you can’t afford to leave any stone unturned.

That’s all for this week, Jazz Pickles. Thanks so much for coming along for the ride. If you want to join me again next time I post, leave your email in that slot in the righthand margin of this page. I assure you I will never share or sell your info.

Until next time––be happy, be nice, be smart, and resist ignorance and fascism with your dying breath.