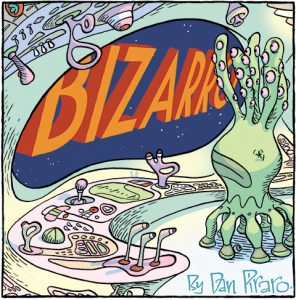 Once again, I was unable to find the time to complete my weekly blog last week so this post has TWO WEEKS of cartoons, which my abacus tells me is FOURTEEN!

(For a righteous embiggenation, click the chick in the below pic.) 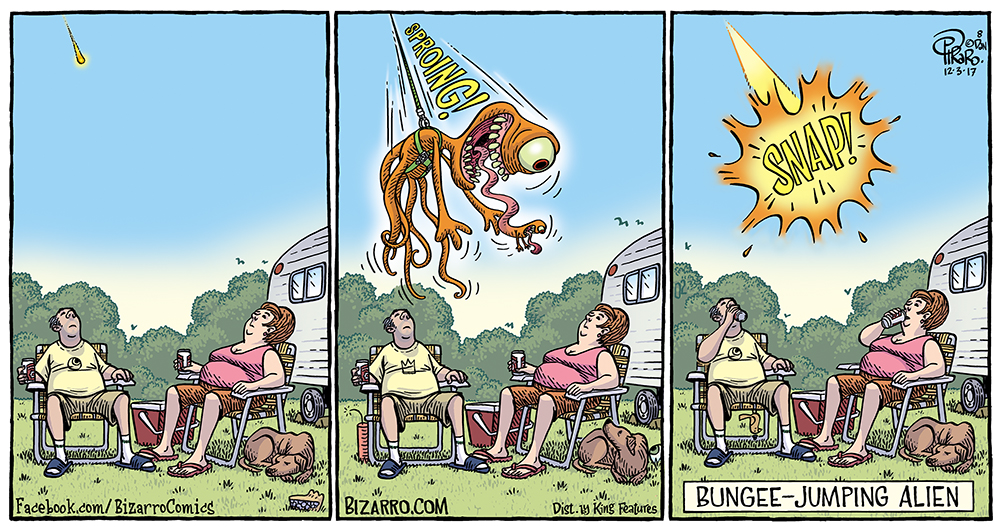 I’ve been told by scientists that the above cartoon is completely possible as long as the bungee cord is made of something much stronger and more flexible than anything we’ve yet discovered and the alien is friction proof. I chose the setting intentionally because, like Bigfoot, extraterrestrials tend to appear before inebriated country folk more than anyone else.

There’s some new stuff in my store like coffee mugs. Go have a look and get yourself (or that special someone you love or hate) something nice. 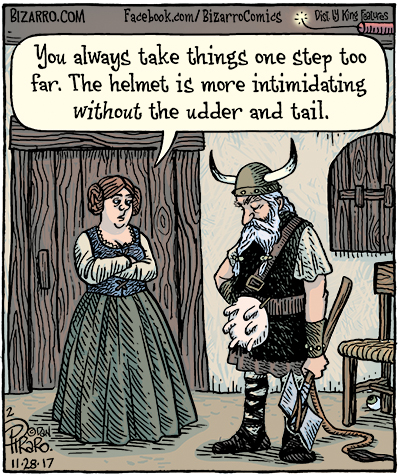 Some zoology zealot pointed out to me that cow’s udders only have four nipples, not six. I don’t know if that is correct or not because I have spent very little time underneath cattle.

I’m surprised that a Viking zealot did not point out that real Vikings didn’t wear horned helmets. Apparently, that motif was popularized by opera costuming. It is my understanding that opera singers also do not typically have six nipples. 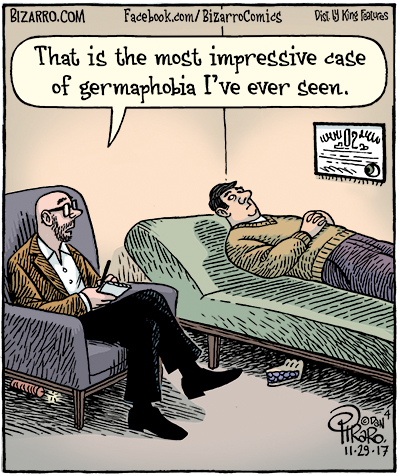 “Germaphobia is a very real and debilitating condition that should not be made fun of. If you or someone in your family was germaphobic perhaps you would not think this was so funny. In the future please refrain from making fun of people in your “comics” just because they are different than you.”  ––a offended “reader”

I am now writing my own hate mail and I can definitely see the attraction. Righteous indignation provides a certain satisfaction that is difficult to find elsewhere. 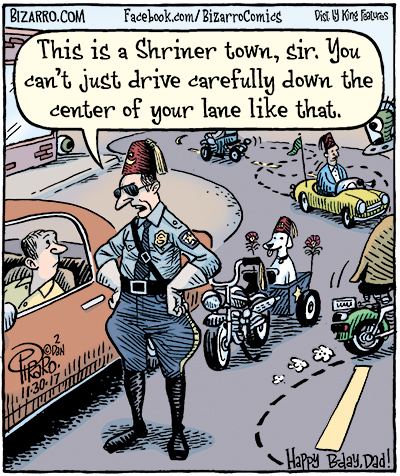 If you are not familiar with Shriners, they are guys who belong to a secret club sort of organization that has elaborate rituals that are held at places called “temples”. They often wear fezes (no, that is not a misspelling of “feces,” it’s the plural of “fez”) and are known for supporting children’s hospitals, which is a good thing. They also frequently ride in parades and such on tiny cars and motorcycles, presumably to entertain the children they support, but I can’t be completely sure about their motivation.

One could also read this comic as a satire of any retirement community where people who are too old to drive are still doing so. Like most of Florida.

If you know anybody who likes cool art and/or coloring, my most recent book is PERFECT for them. Cheap, too! ($6! And I wish I was kidding.) 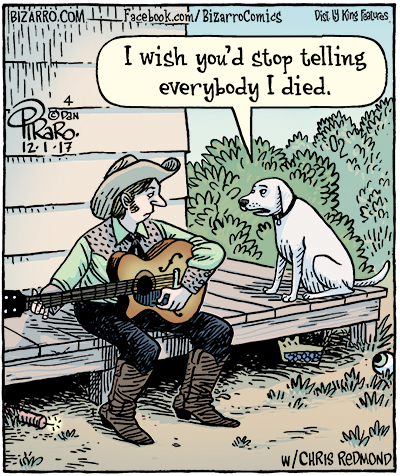 All of my sons-in-law were visiting us recently and half of them (Chris) said he’d thought of a cartoon I might like and I really loved it and here it is. If you’re from a place in the world where you’ve never been exposed to American country music, first, give thanks to whatever god you imagine is responsible for this minor good fortune, then become aware that American country music is often about sadness and two very popular reasons for this lamentation are sexual infidelity and the death of a cherished dog.

On a side note, I once heard of a country music song title that amused me: “My Wife Ran Off With My Best Friend and I Miss Him”. Perhaps the best friend was his dog. I don’t really know. 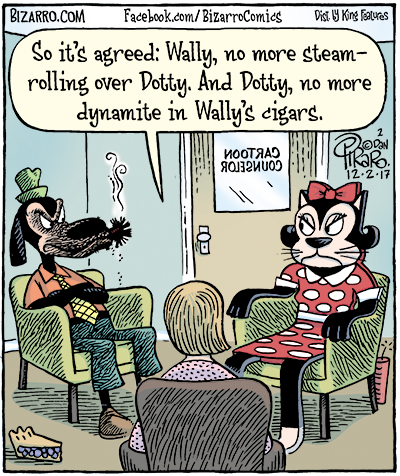 In this era of outing people for harassment of and violence against women, I thought it might be good to point out the plight of cartoon characters, many of whom experience far more creative and consistent violence than those of us in the real world.

Yes, I agree with you. Violence against women (or anyone) is a serious issue and should not be the subject of humor. I don’t know what I was thinking.

HEY, LOOK! IT’S ANOTHER TITLE PANEL (below) SO THAT MEANS WE’RE ABOUT TO EMBARK ON YET ANOTHER WEEK’S WORTH OF CARTOONS! CAN YOU BELIEVE HOW MUCH FUN WE’RE HAVING? I CAN NOT. 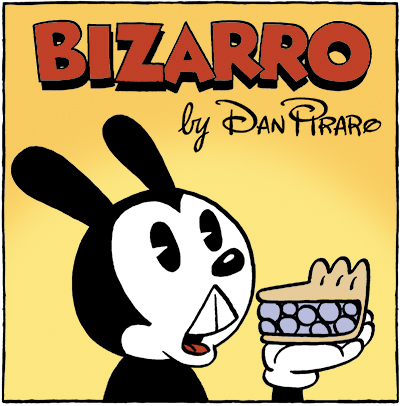 In this Sunday title panel, I have made my Bizarro Bunny look like Mickey Mouse. I even signed my name like Walt Disney used to. Perhaps I will soon be impossibly wealthy.

As of yet, I am not wealthy, I’m just an artist getting by. A tiny part of how I get by is by selling stuff. Here’s a place that offers some super nice, archival, limited-edition, signed-and-numbered prints of some of my favorite Bizarro cartoons. They also sell some of my original art from Bizarro. Have a look. 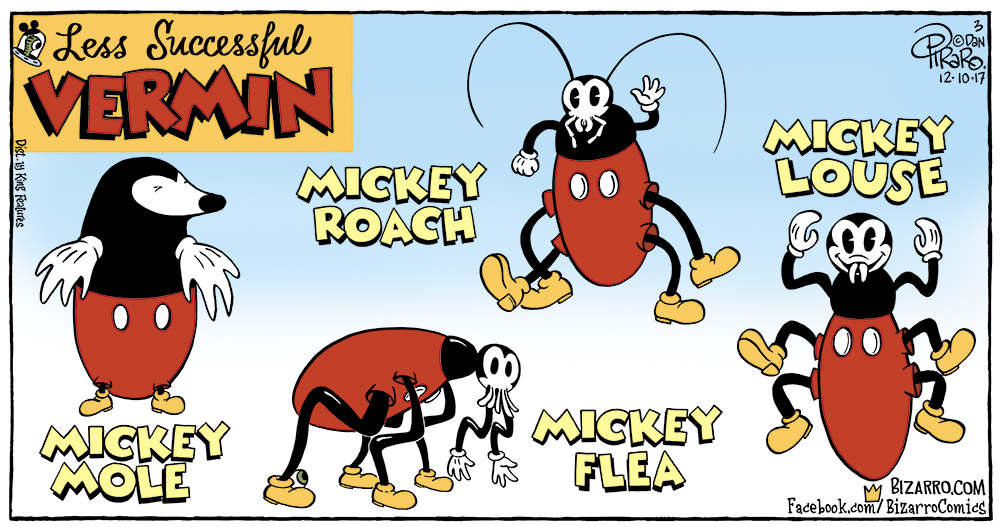 It recently occurred to me that training an entire nation to find vermin adorable contributed to Trump’s election. I blame Walt. 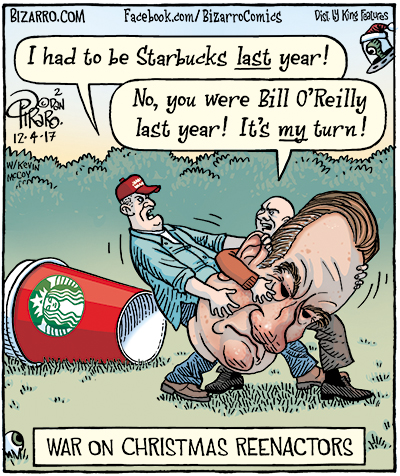 It still boggles my mind that Bill O’Reilly got any traction out of Starbucks not putting blatantly religious imagery on their coffee cups a few years back. B.O. also found all kinds of other ways in which he perceived some kind of nationwide conspiracy to undermine Christianity and convinced plenty of people to get all lathered up about it.  I usually find idiocy of this sort to be hilarious but when it occurs on the magnitude that it currently does in the U.S., it’s more frightening than funny. (See “The Handmaid’s Tale” or the way any country that combines government with religion.)

Want to help support the kind of content I supply or just toss me a holiday gift? You can do that by making a one-time donation or a monthly contribution to Rancho Bizarro here. I will immediately become your imaginary best friend! 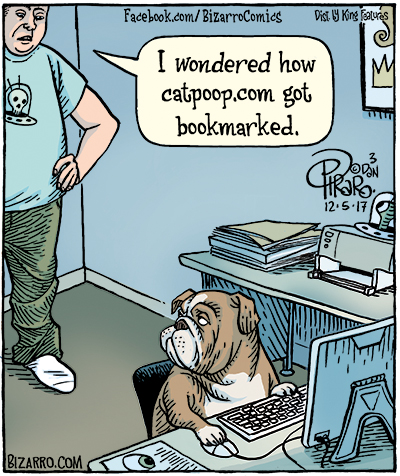 I adore dogs and think they are close to the most perfect creatures DNA ever coughed up, except for their utter lack of discrimination when choosing what to put into their mouths. My god, they make me want to vomit. 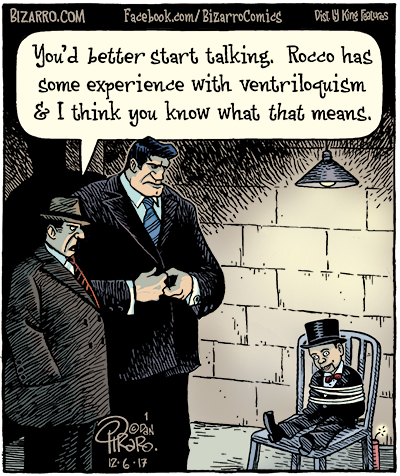 Dummy: Who just stuck their hand up my ass?!

Rocco: You wouldn’t have been able to ask that question if I hadn’t. 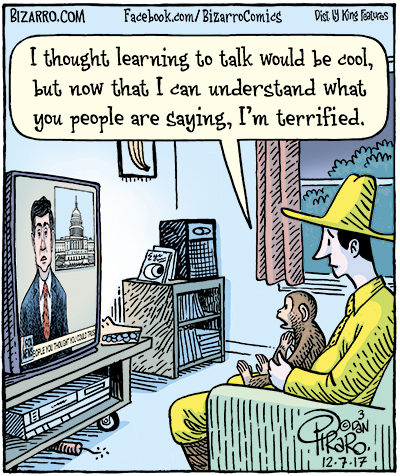 If living with a man who wears that yellow getup 24/7 isn’t enough to frighten Curious George, the fact that a known pedophile is about to be elected to the U.S. Senate with the blessings of the president and the Republican Party certainly is. This is what the “party of family values” is up to, folks. Still think it doesn’t matter which party you vote for? 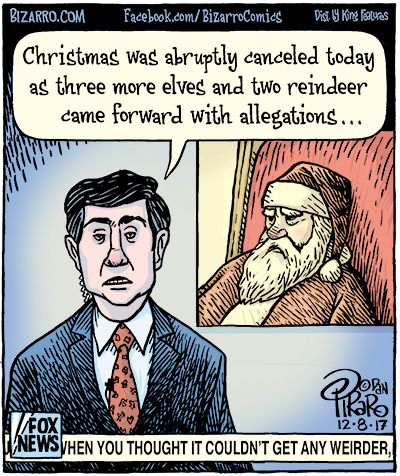 In a country with an admitted molester of women, a Nazi sympathizer, an unmitigated liar and so, so, so much more in the White House, anything is possible. It is my contention that Trump’s not being hit by lightning is evidence either that there is no god, or that the ones that exist are sadistic assholes.

I got several complaints about this cartoon. This one is my favorite:

“I am extremely disappointed and offended by your cartoon printed on 12/08/2017. Considering children read your cartoons which are for the most part entertaining, but this particular one is sadly referencing a subject matter that hits to close to home with our children and adults at any time. Not everyone needs to be reminded of depraved situations on a constraint basis especially when the funnies are read by so many for the pure enjoinment of laughing and being entertaining to them, at least that’s what I’ve always given them credit for, not to make a horrifying statement that children could and would find frightening. This could actually ruin this and many Christmases for many children. Santa Claus molesting elves and rain deer is not funny and this cartoon crossed over even Bizzaro lines!”

My paraphrased reply was something close to this: I worded this the way I did so that younger, less sophisticated children would not know what it means. If a child is educated or sophisticated enough to understand it, they’re also likely old enough to understand it is a cartoon and has no power in the real world. If I thought any child would be upset by it (without an adult’s coaching) I would not have published it.

I refrained from mentioning that I was “extremely disappointed and offended” by her grammar and punctuation skills. 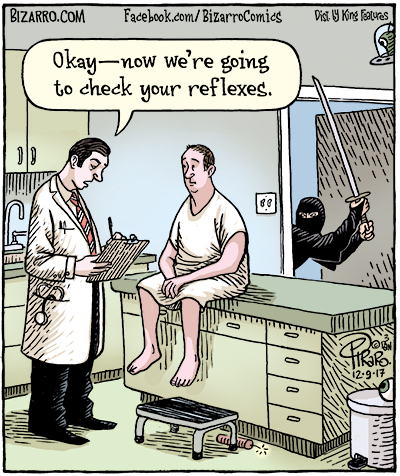 Not long ago, a reader asked me to do a cartoon with a ninja. At first, I ignored him but then I found him clinging to the ceiling of my bedroom wearing black pajamas with only his eyes showing, so I decided to relent. We still haven’t gotten all the pajama glue off of the ceiling. At least, we hope that was pajama glue.

That’s all for now, Jazz Pickles. Have a great week––until next time, be smart, be happy, be nice, and resist fascism and ignorance.