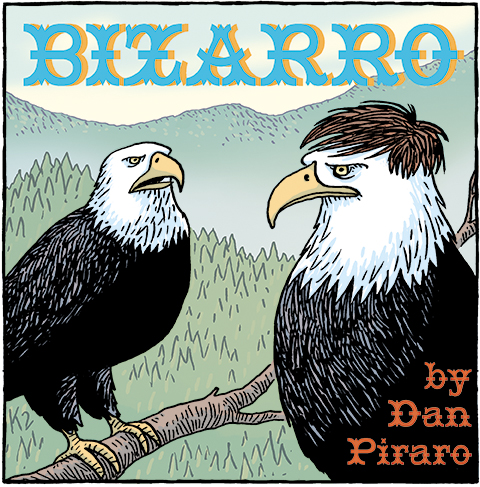 (If you’re feeling a hankering for embiggenation, click a cartoon.) 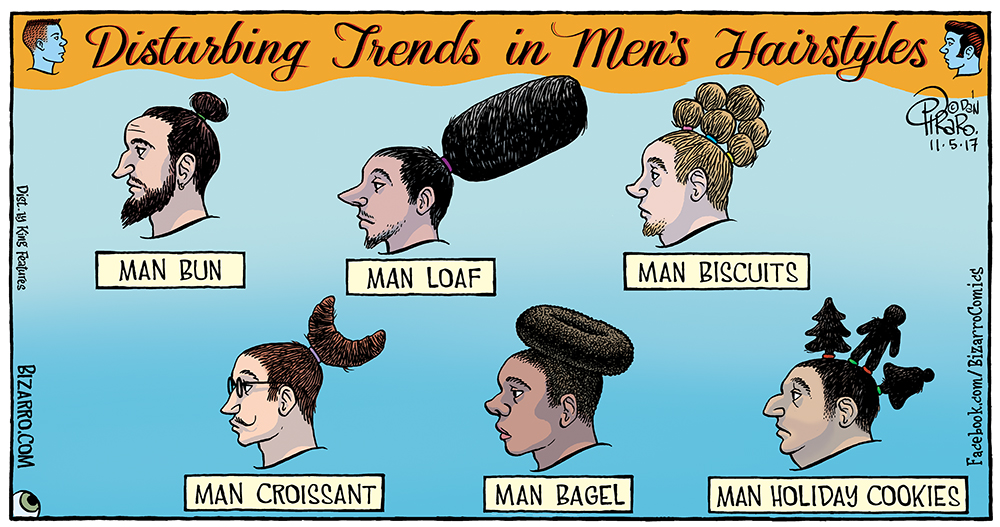 I had a wonderful time concocting the above cartoon in spite of the fact that I knew it would doubtless be at the expense of at least a few of my readers. Sorry about that male bun wearers! As a person who has embraced some unusual fashion choices over the years, I have no right to poke fun at the fashion choices of others but what fun would that be? Then again, if you’re going to go with a man bun, you should probably have a good sense of humor about it as I always have with my Dali mustache.

Some readers thought that the character in the Man Croissant is supposed to be me––I suppose because he has glasses and a Dali mustache––but it isn’t. I have a much more grande nose than his, plus a full, pointy beard and not nearly enough hair to manage a bun, much less a croissant. If I let it grow for a good long while I might be able to raise a Man Crouton. Maybe.

I decided not to make this one political but I could easily have included the Cheeto Mussolini and called his abominable hairdo a “Man Pancake with Dust Ruffle,” as seen here.

On a weird side note, no sooner had I submitted this cartoon some weeks ago, my good friend and cartoonist colleague, Wayno, published a simpler version of the same gag in his feature, “WaynoVision” on GoComics. Here are his cartoon and brief blog post about the coincidence. Wayno and I have collaborated on many dozens of gags over the years but none lately. We’re going to start doing that again soon because we both really enjoy the process and the results, as have our readers. 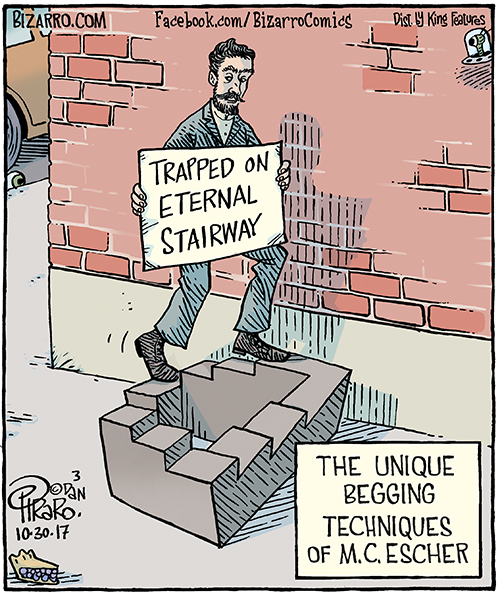 It occurs to me that this might be a good Halloween costume if you could figure out how to build the stairway. It’s hard enough just to draw one of these damn things, so good luck with that.

I’ve done around a dozen Escher cartoons in my all-too-long career. Here’s one of my favorites from 2003. 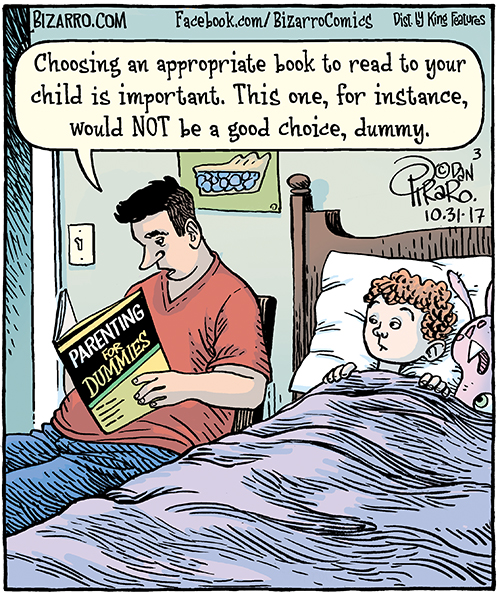 There are plenty of books on parenting but the folks who need them most aren’t likely to read them. So many areas of life are like that. (sigh) (weep)

I just heard there are some holidays coming up during which people often purchase gifts. One might be able to find appropriate choices for this use at my new store. 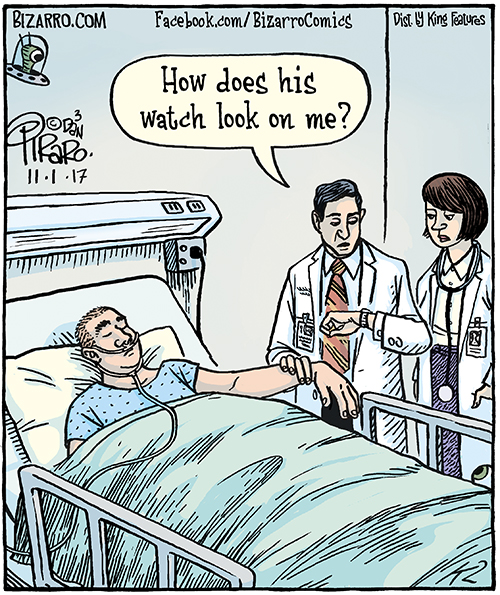 I posted this cartoon on Instagram and was surprised by how many people left comments earnestly defending the medical profession. For those tempted to do that here, let me remind you this is a cartoon, not a public service announcement. 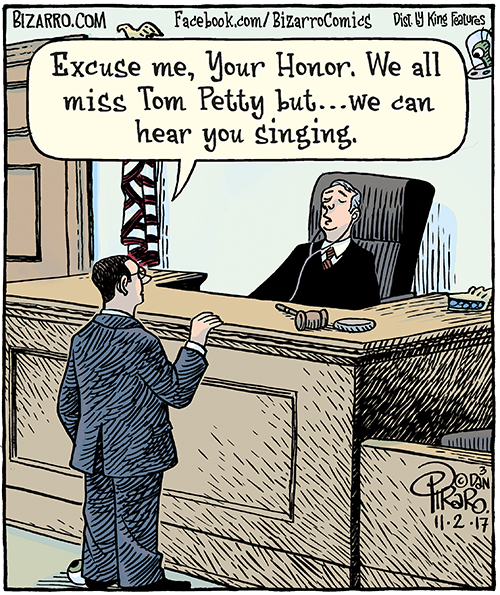 This cartoon is meant as a heartfelt tribute to Tom Petty, who died far too soon. It is rare for a musician to remain popular as long as he has, write as many hits as he did, and maintain his artistic integrity throughout such a long career in an industry that chews people up and spits them out faster than Trump goes through White House staff. Only the good die young, as they say. 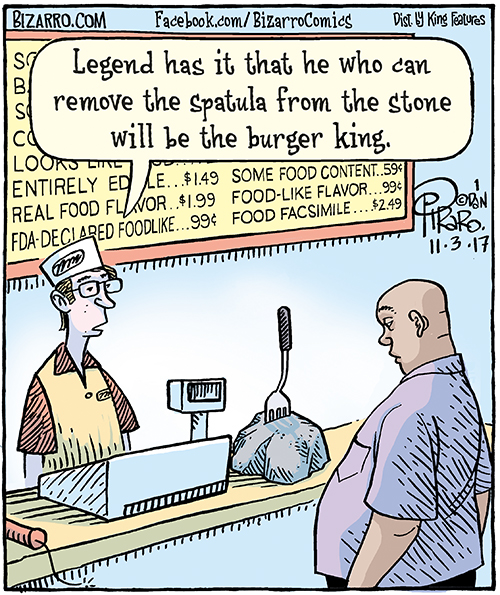 Many have asked for an unabridged version of the above menu so here it is: 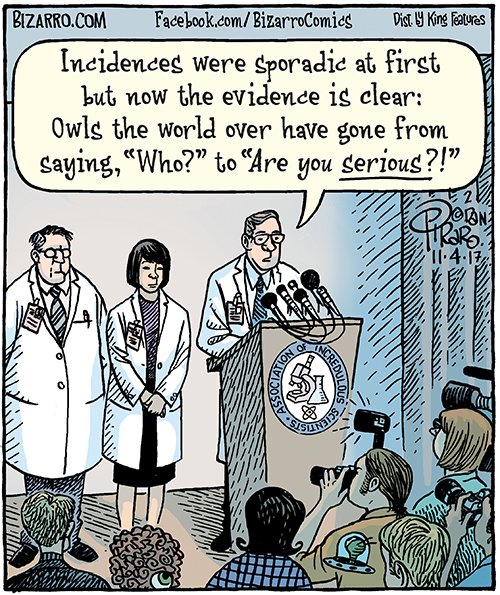 Of course, I wanted the last phrase in the above cartoon to be “WTF?!” but those three letters standing alone in that order are not allowed on the funny pages. Even if the headlines are entirely in the sewer, the funny pages are valiantly being kept clean and polite. (At least something in America isn’t going to Hell in a handbasket.)

Thanks for reading this far, Jazz Pickles. This is the time of year that I like to remind you that many of my cartoons can be ordered as greeting cards at this place. I’ve no doubt you’ll like some of these.

Until next time, be smart, be nice, and resist fascism and stupidity.

Here’s something that would make a great gift and costs almost nothing. 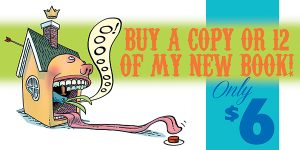 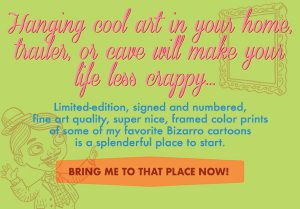