The Charming-Yet-Infrequent Newsletter– So Much To Tell 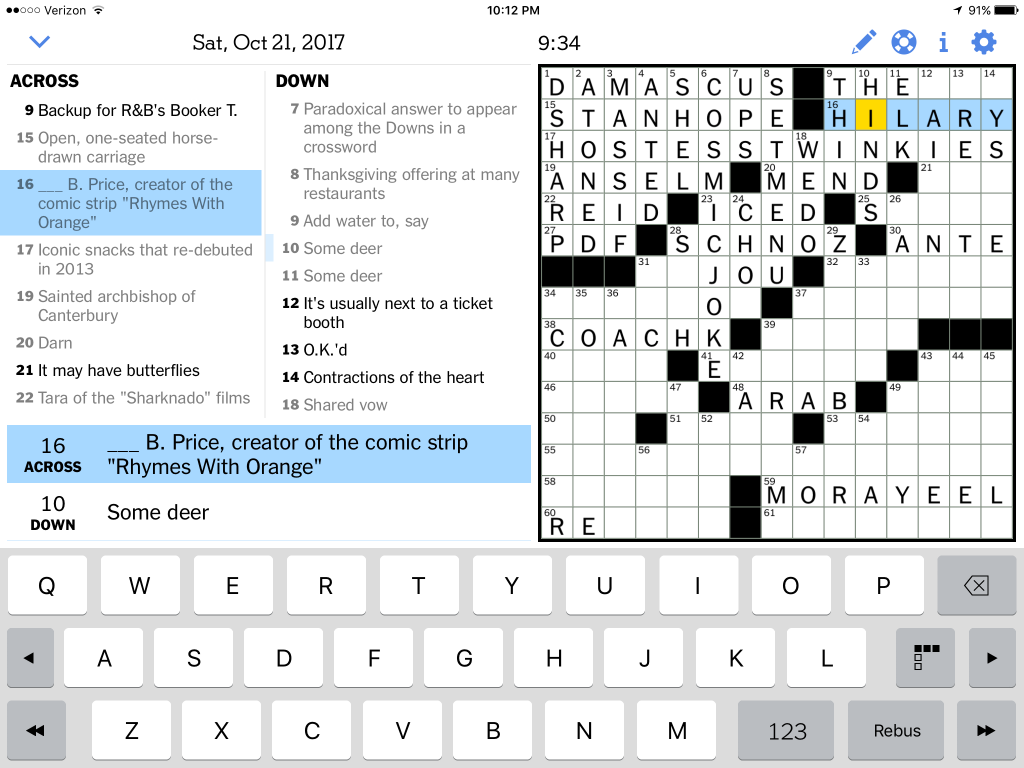 Hi Friends!
Well, there’s A LOT to catch up on.

The highlights, in “I Statements”:

–I got a huge surprise after I went roller skating this weekend, in the form of a puzzle.

–I took on a full time collaborator for Rhymes With Orange.  It’s been awesome.

–I visited a grave stone maker.  (Not for personal reasons, thank goodness.)

–I visited some Greek Islands with The Notorious B.U.Z.  (Also known as my mom.)

–I taught a cartooning class.  (The students ROCKED.)

–There’s a Cartoon Art Auction Fundraiser for Hurricane Relief starting Thanksgiving Day.  (This is not an “I Statement.”  Sorry.)

–iPhone travails, bonus quote from my mom, and a picture of my gym shorts.  (This is an “i” statement.)

Finally, a clue I could actually get!  This was Saturday’s New York Times Crossword Puzzle.  I hope I can last as long as long on this earth as 17 Across…

Co-writing a play a while back made it crystal clear to me that I enjoy collaborating more than I enjoy doing things by myself.  So, after 22 years of doing the strip solo (I’m a slow learner!), I invited Rina to come aboard.  I have been a fan of Rina’s since the 90s, when I walked into a bookstore and saw Rina’s Big Book of Sex Cartoons.  Here was someone young and female drawing funny single panel cartoons.  There weren’t many of us out there, and this was the pre-Google era, and I was in San Francisco, and she was in Toronto.  And I barely spoke Canadian. We ended up getting to know each other through The National Cartoonists Society.  Working with Rina has really revitalized me, and the strip.  It’s been a blast so far.  Check out her website at www.rinapiccolo.com 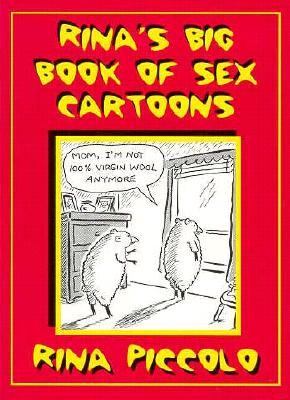 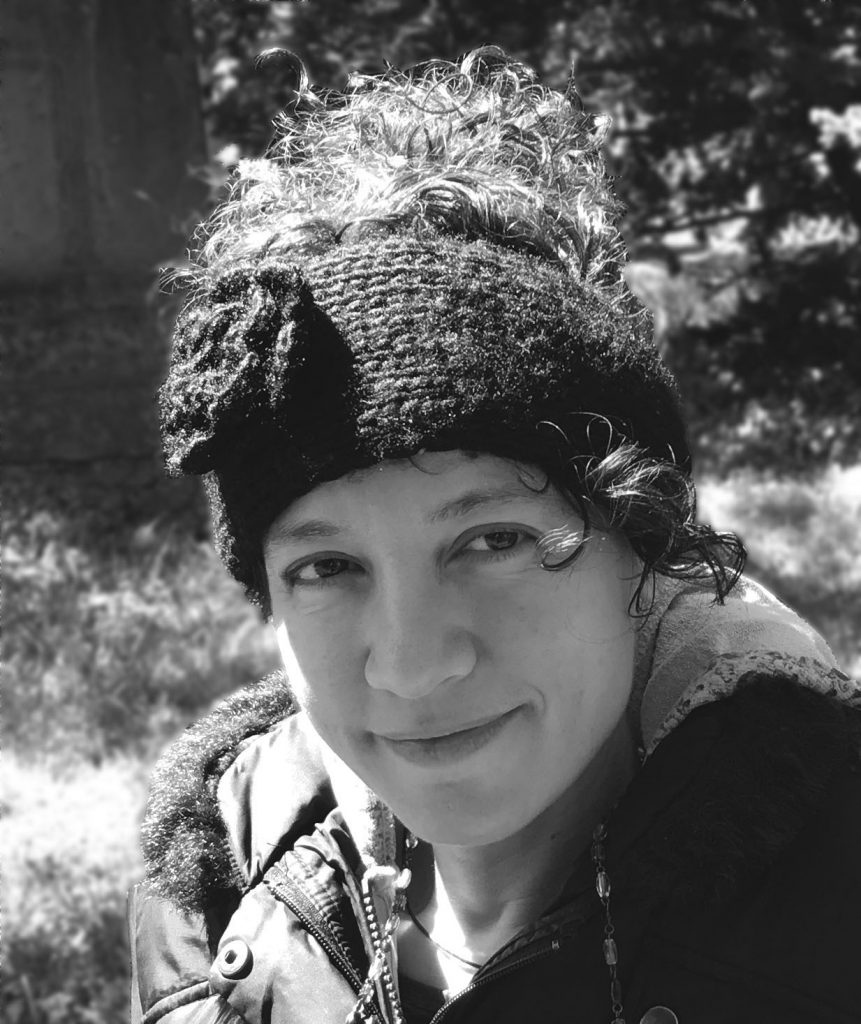 Sometimes when we have conference calls about biz stuff, she sends me her phone doodles afterward.

It makes me want to talk longer. 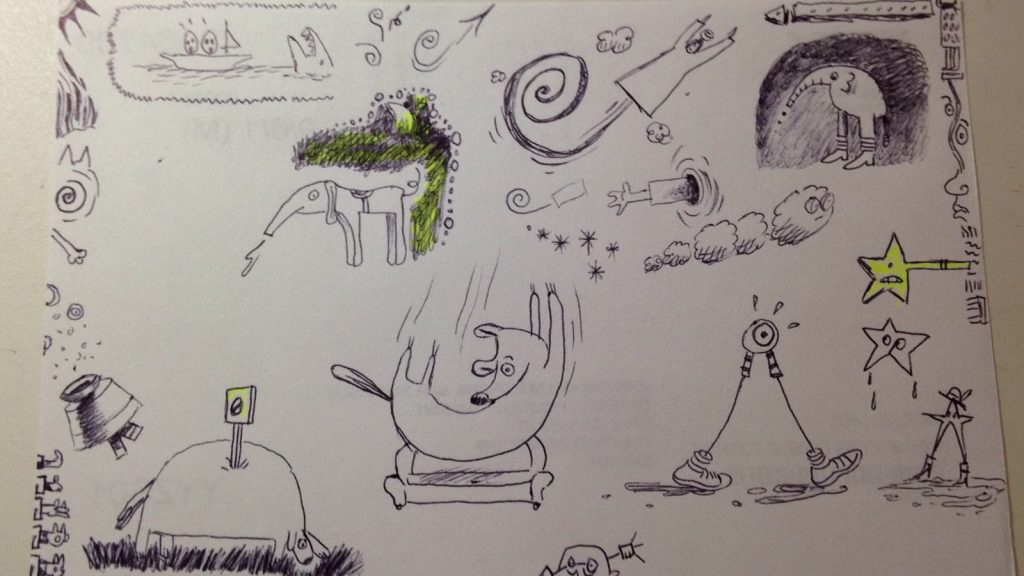 My partner Kristin and I went to see an enormous granite quarry in Vermont this summer, then got the factory tour of the gravestone making process.  This headstone confused us.  Isn’t it late for this? 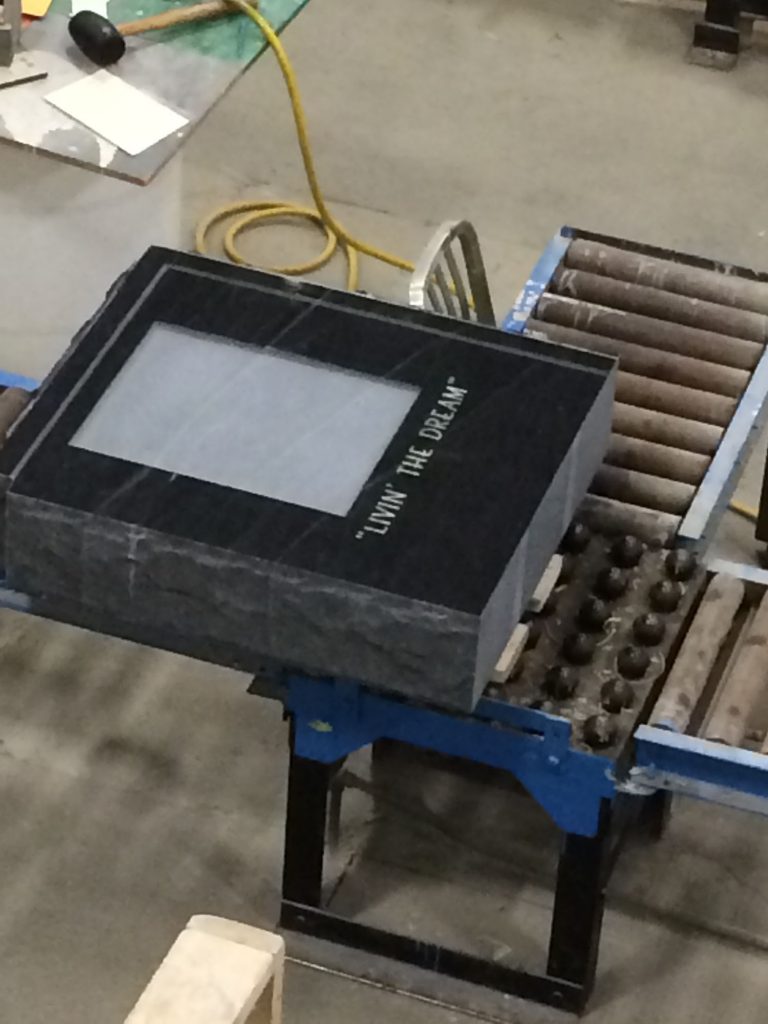 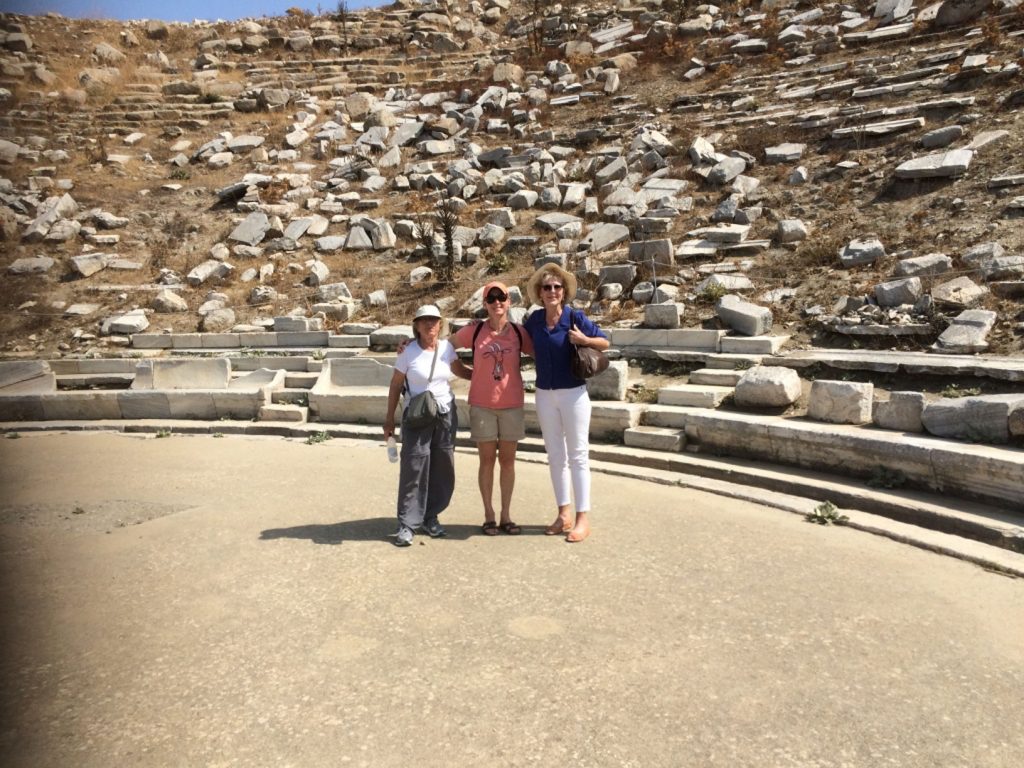 In the 5th century B.C., the theater was entertainment and education.  Everyone went.  But back then, when an actor in a play was killed, the audience never saw the death.  The actors went back stage to simulate the action, and then the deceased would come out with mourners behind him.  The point was to emphasize the pain of the mourners versus glorify the violence of the death.  The thinking was that if people saw the killing part, they might want to emulate it.  They were onto something.

BUT GREECE WAS ALSO A PAINT-YOUR-OWN-POTTERY STUDIO

All of those beautiful white marble statues we associate with Ancient Greece?  They were ALL painted.  Meet Athena.  To me, she looks like a lawn statue. Made at a birthday party.

By the time they were dug up, the paint was gone. Historians only realized this in the last two decades, when they had the technology to detect it.  Nutso. 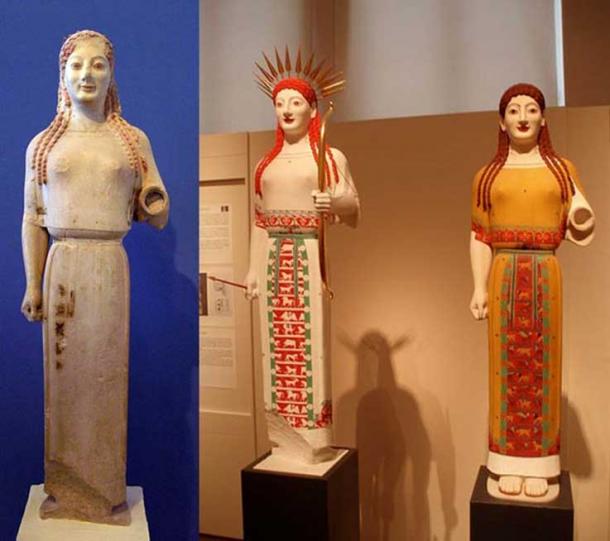 HOW GREEKS WENT TO THE BATHROOM 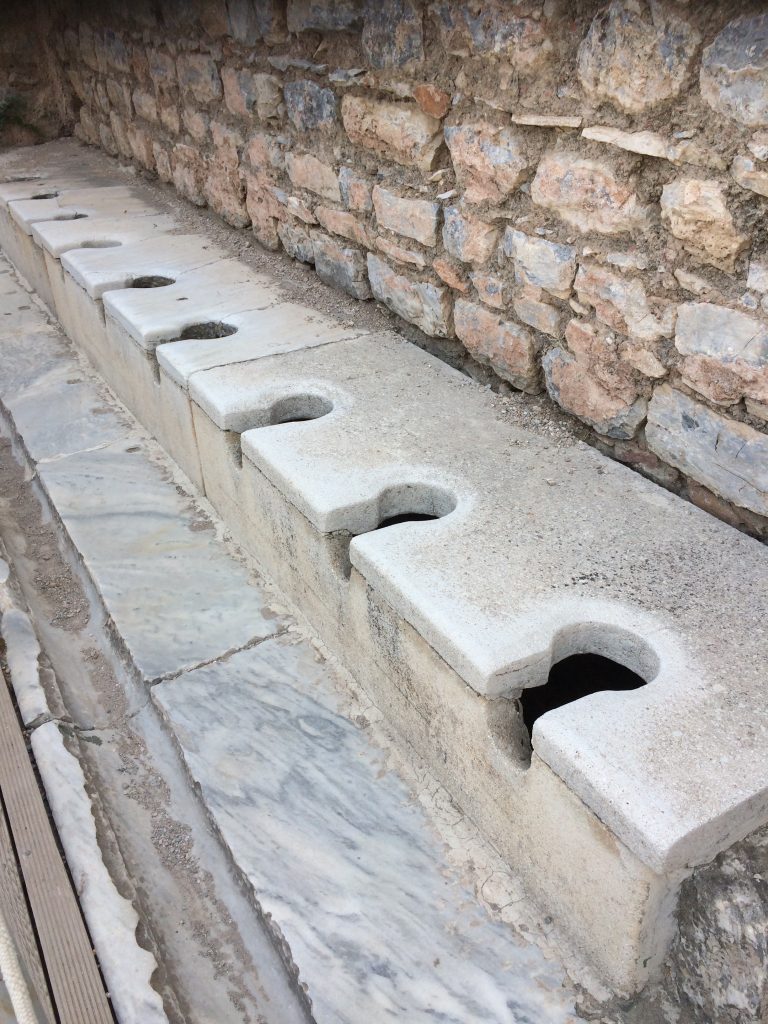 It was a social affair.  Everyone sat knee to knee.  The gutter in front near their feet had fresh water, and people used a sponge attached to a stick.

TEACHING AT THE CENTER FOR CARTOON STUDIES

Four days, ten students, over 100 drawings made.  I’ll be teaching at The Center For Cartoon Studies again June 11-14, and will be most likely be doing another online class in the winter or Spring. 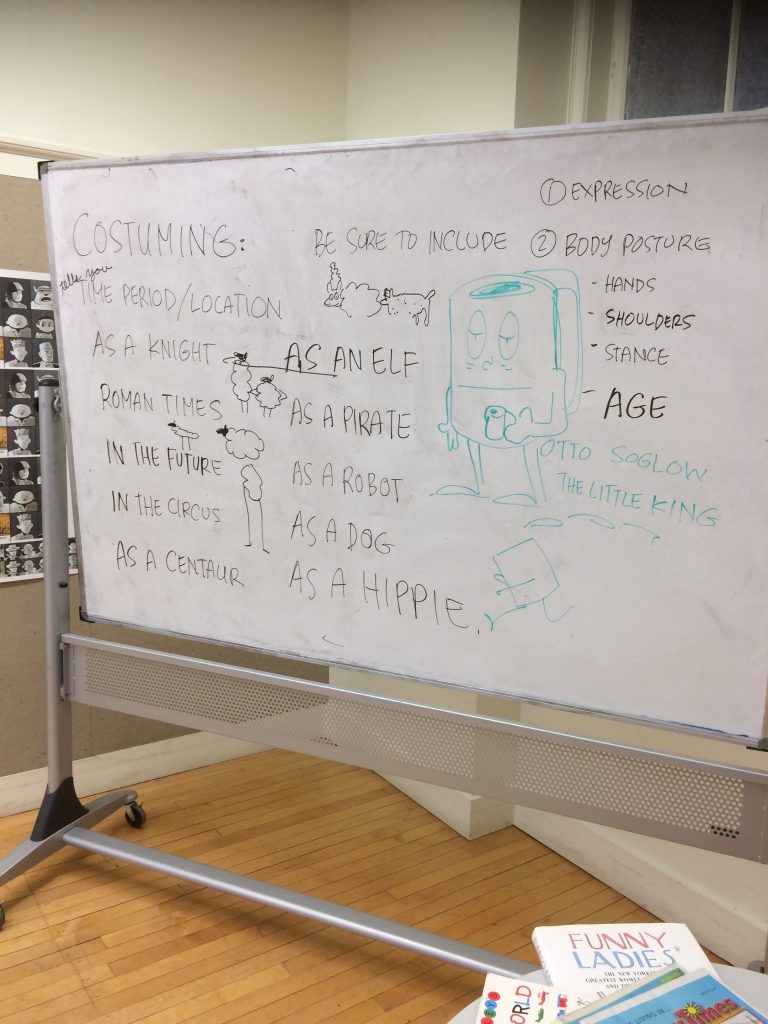 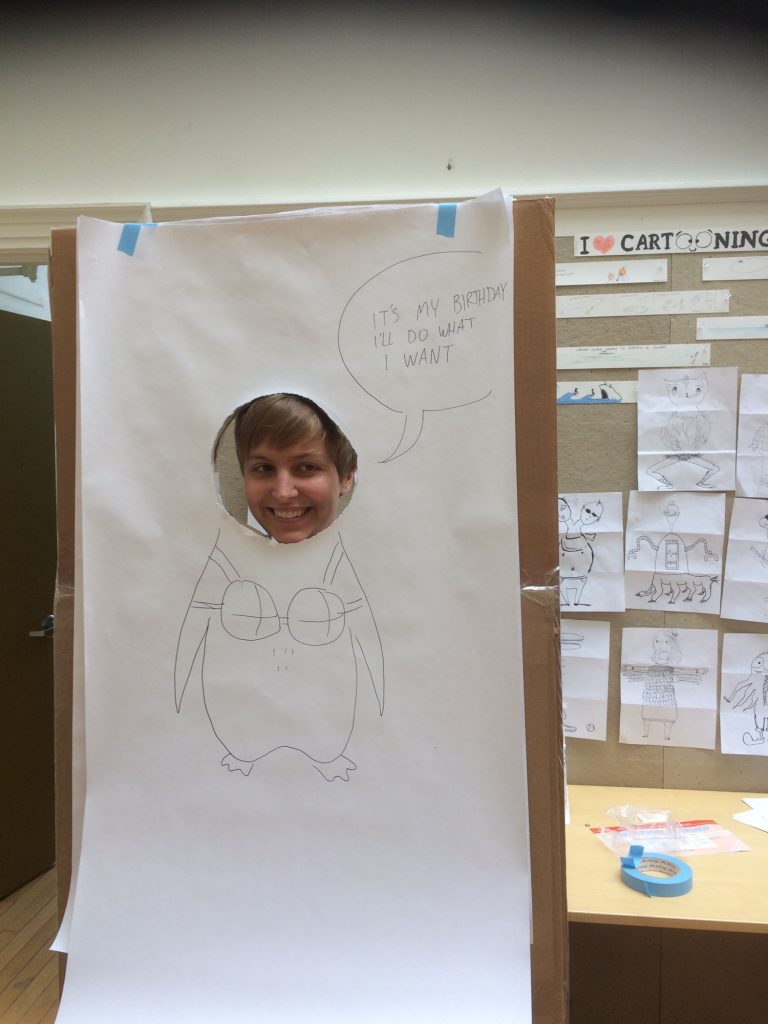 Just got the new CanineComics from the printer yesterday!  It’s a comic book of dog cartoons, and a companion to my previous comic books Catacomics and Hanukkomics.

You can get signed copies only at Open Studios, but it will be available online from www.IndyPlanet.us very soon.  Stay tuned.

What’s Open Studios? 50+ Artists open their doors for the public to snoop around and touch things.  Unique gifts for the holidays.  Small cups of wine. I’ll have all manner of funny cartoons. 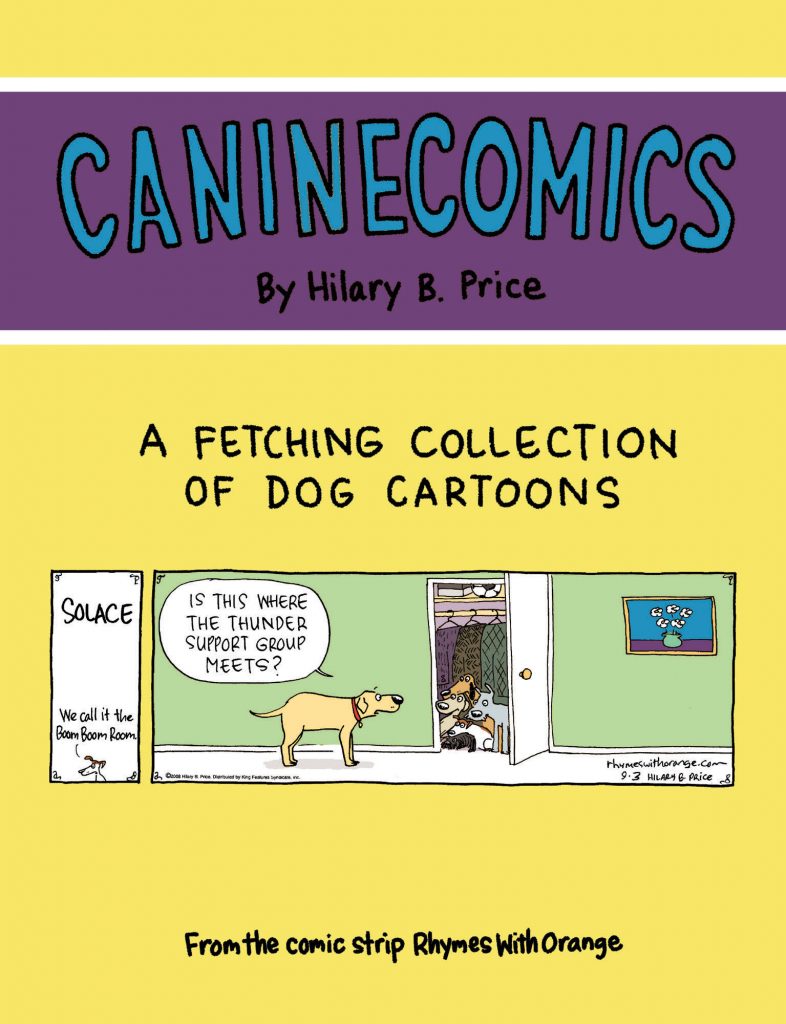 One of my cartoons will be in the exhibition Drawn to Purpose: American Women Illustrators and Cartoonists, but the Library of Congress hasn’t yet announced the show on their website.

The exhibition Drawn to Purpose: American Women Illustrators and Cartoonists  is scheduled to open at the Library of Congress on November 18, 2017, and will run through October 20, 2018, in two rotations, with a completely new selection in May.  Inspired by the Library’s rich collections, the exhibit features the remarkable but little known contributions made by North American women to two popular art forms—illustration and cartooning. In fields traditionally dominated by men, many women have long earned their livelihoods creating art intended for reproduction and wide dissemination in newspapers, periodicals, and books. Spanning the late 1800s to the present, some sixty selected drawings and prints highlight the gradual broadening, in both the private and public spheres, of women’s roles and interests, addressing such themes as evolving ideals of feminine beauty, new opportunities emerging  for women in society, changes in gender relations, and issues of human welfare. An online version of the exhibit is planned for the Library’s website and a companion book Drawn to Purpose is scheduled for release in spring, 2018.

There will be an online auction through Heritage Auctions starting Thanksgiving Day (Nov 23rd) of original cartoon art donated by members of the National Cartoonists Society.  The auction runs for a week.  All proceeds  will be sent to Direct Relief, a charity that specializes in providing humanitarian aid to victims of natural disasters.  The auction is not live yet, but here’s the link: www.HA.com/NCS

I will have a piece up for auction, and so will many of your favorite cartoonists.

WHAT BUZZY SAID THIS SUMMER 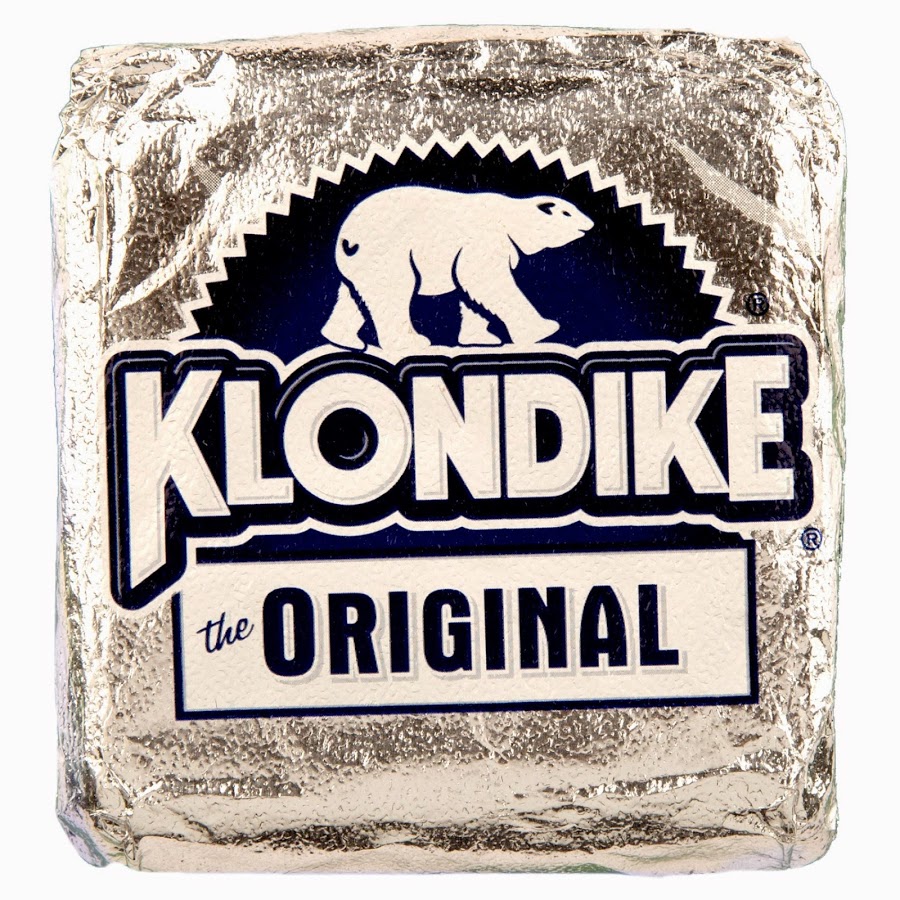 My friend’s kids sat eating Klondike bars at the kitchen table at my parent’s home in Cape Cod. Ice cream and chocolate bits were everywhere.  One of my friends warned her kid not to let the ice cream drip onto the wooden cane chairs.  Without missing a beat, my mom said, “Oh please– don’t worry about getting ice cream on the chairs– their wet bathing suits will soak it up.”

My kind of housekeeping.

NECESSITY IS THE MOTHER OF WHATEVER YOU CALL I JUST MADE

It was finally time to get off my ex-wife’s and her new wife’s cell phone plan and strike out on my own.  It had only been about a decade since we parted ways… why rush it?

So I got my new phone and my new carrier this Sunday, and the phone store didn’t have the cell phone case that I wanted, so I had to order it online, and I am too cheap for expedited shipping.  The phone is incredibly slippery without a case, and in fact slid out out of my pocket and landed onto the movie theater floor that very evening.  (You’d think the cinema floor would add some nice stick to it, but it was not sufficient.)

So I made one, today, in the interim. 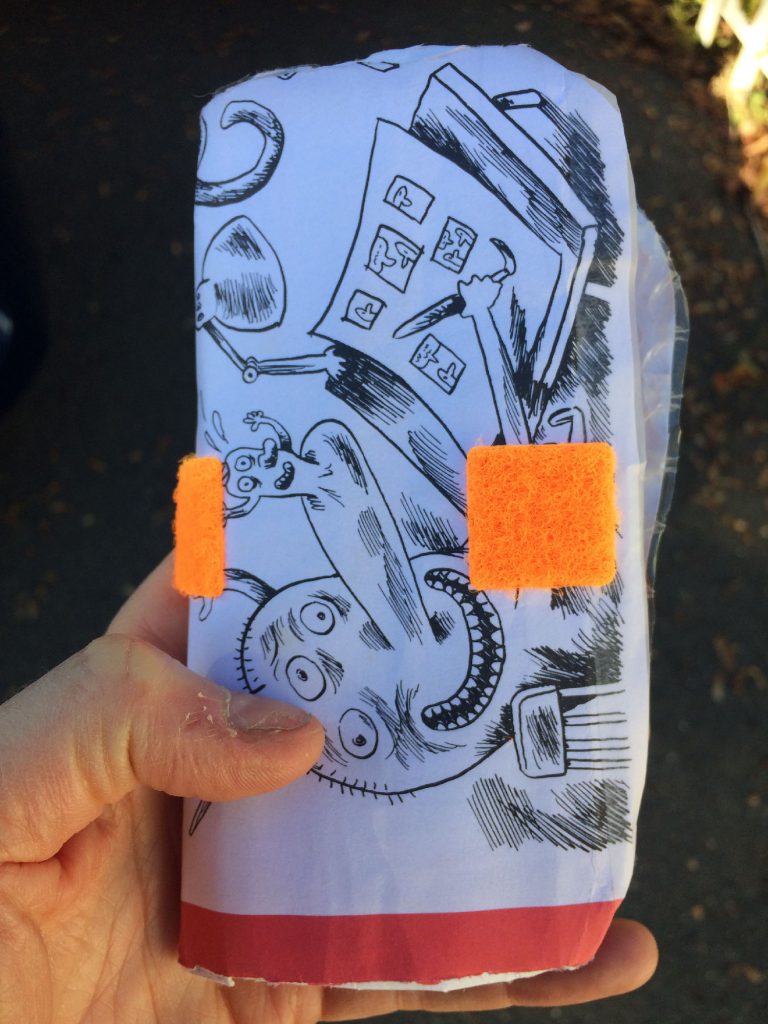 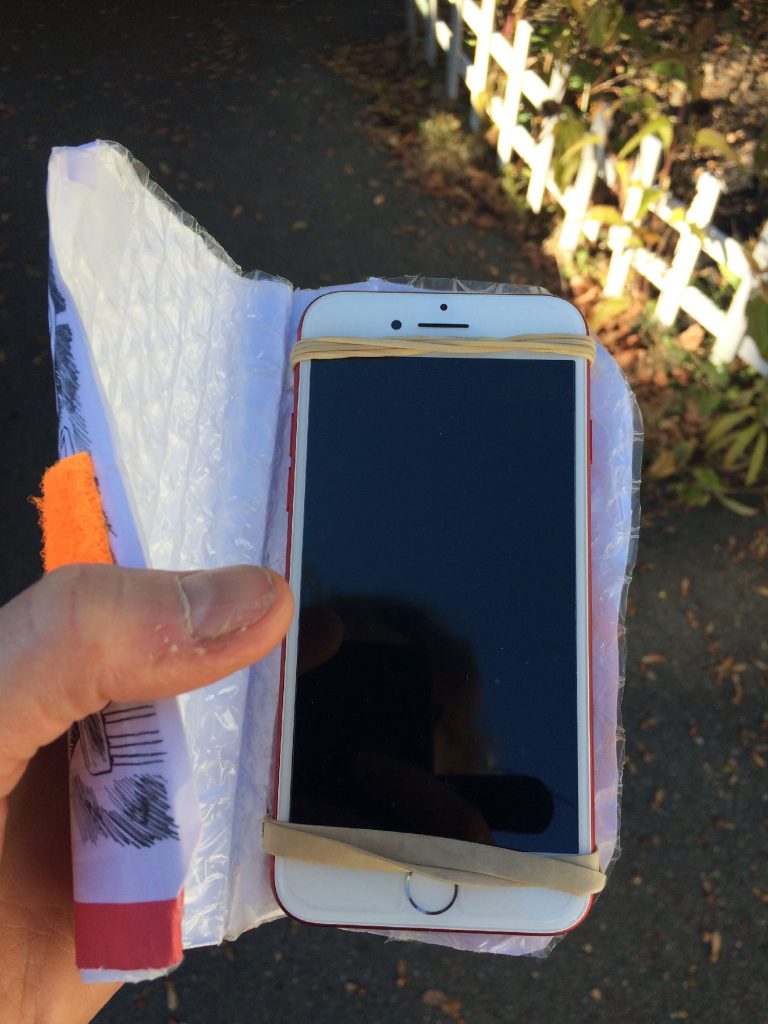 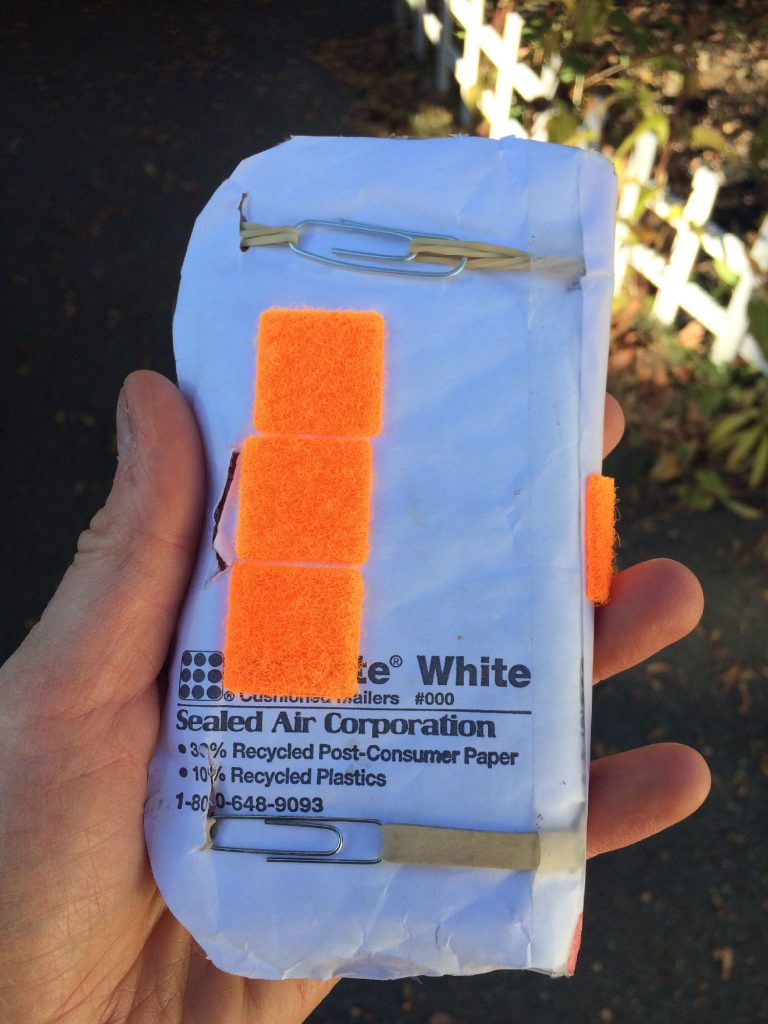 When I wear gym shorts, I’m not just a Champion, but a Championampion. 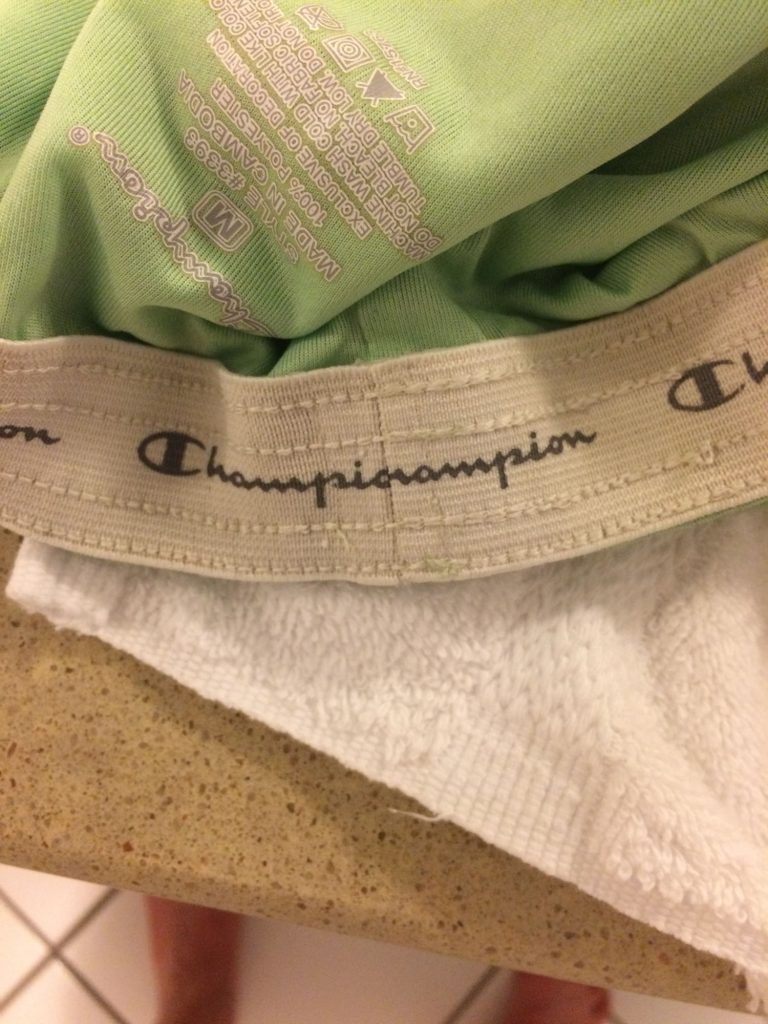 Thanks for tuning in!
See you at Open Studios!