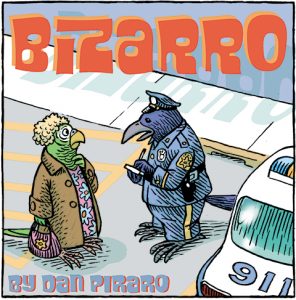 (If the kids are screaming “Embiggenate it!” click the image and tell them to shut up.) 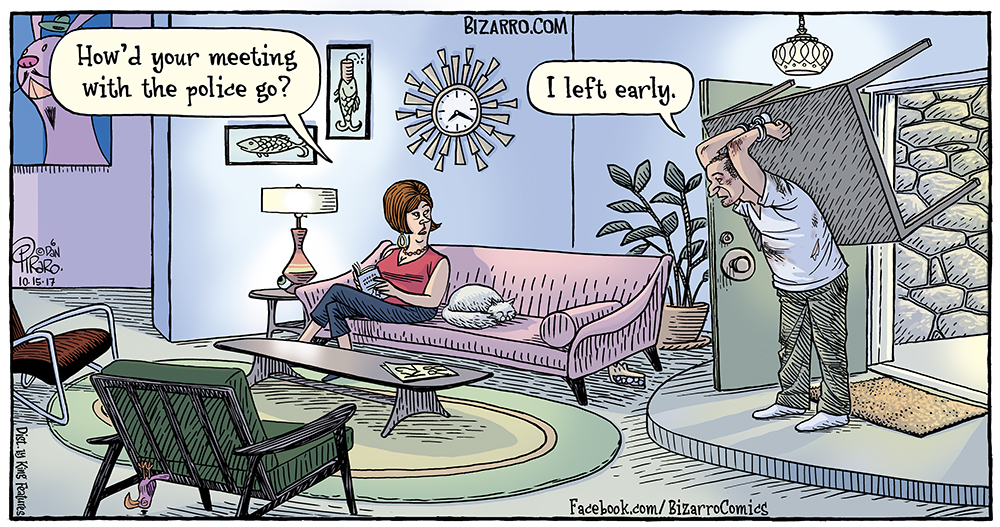 Bizarro is brought to you today by Halloween Costume Tips for Babies.

I’ve learned through personal experience that meetings with the police can be fraught with danger both to one’s personal safety and freedom, so I make it a habit to cut them short. The gentleman in the cartoon above has done so, too, though it can be assumed that the police he was meeting did not agree to his leaving when he did. This happens.

I’d like to be able to move on without mentioning recent activism surrounding the traditional treatment of non-white people by a significant portion of America’s police officers, but I’m not that kind of guy. I will say just this for now: I fully support any peaceful protest that reminds Americans that racism is still and has always been a daily experience for many millions of non-white inhabitants. The pro athletes who are taking a knee instead of standing during the National Anthem are heroes and have my full support. People who think a piece of fabric in the form of a nation’s flag is more important than the concepts it stands for are ignorant at the very least and quite possibly simply racist scumbags who fear losing the power they’ve wielded for so long in the U.S. They are, for the most part, the same people who voted for Trump and anyone who did so, in my estimation, is one of two things: too stupid to be able to instantly spot that Trump is a self-serving narcissist who has never meant anything he has ever said (so obvious a child could see it! what’s wrong with these people?!) or a garden-variety racist. Many are both, of course. If America doesn’t wrestle power back from these people in the near future, it will be lost and will likely never return. Think “The Handmaid’s Tale”. There is a metric shitload of reasons that brilliant book and the Hulu series resonate so loudly just now. If you think it can’t happen here and now, you’re as wrong as the millions who assumed an unqualified psycho like Trump could never be elected. 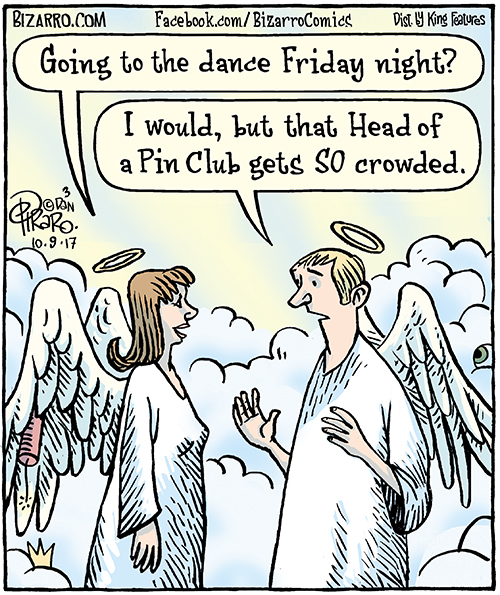 If you don’t get this joke, you’ve likely got a small, fairly insignificant hole in your education. We all have a few, so don’t let it get you down. To fill the gap, just google, “how many angels can dance on the head of a pin?” 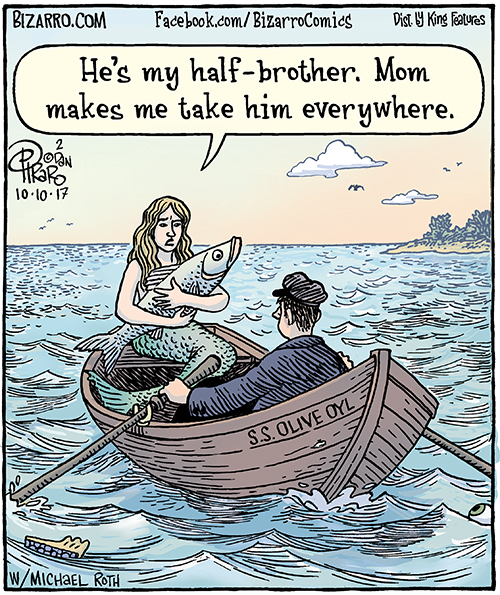 I just did a mermaid gag a couple of weeks ago but sometimes one gag leads to another. In this case, a longtime email-pal in Germany who has suggested gag ideas that have made it into Bizarro before suggested a scenario with a mermaid who is forced to take her younger sibling with her on dates. I liked it and turned it into this. Thanks, Michael!  Here’s the surprisingly sexy mermaid gag from a few weeks ago that some readers didn’t get at first. If you are among those who don’t get it, google “baseball metaphors for sex”. 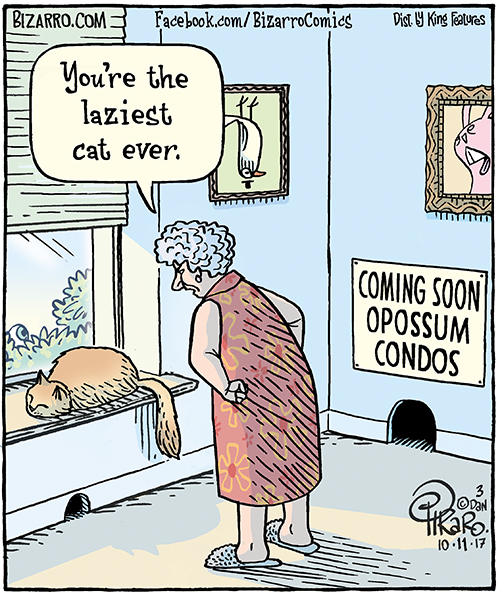 Opossums are very strange animals. They are the only marsupial found in North America, their name is commonly pronounced as though the first letter is silent (which it isn’t meant to be), it’s simultaneously very cute and horrifically reminiscent of a gigantic rat, it is the only animal in North America with a fully prehensile tail and they are known to overturn canoes full of natives and eat them. (That last fact might actually be about crocodiles in old Tarzan movies.)

Here’s a short, very cool article about opossums. Here is my favorite quote from the article, which was pulled from Captain John Smith’s notes in 1608: “An Opassom hath an head like a Swine, and a taile like a Rat, and is of the bignes of a Cat. Under her belly she hath a bagge, wherein shee lodgeth, carrieth, and sucketh her young.”

The Captain was not known for his spelling skills.

What I could not find out from Google is how rodents get hold of power tools with which to cut perfect little half-circular holes in baseboards. 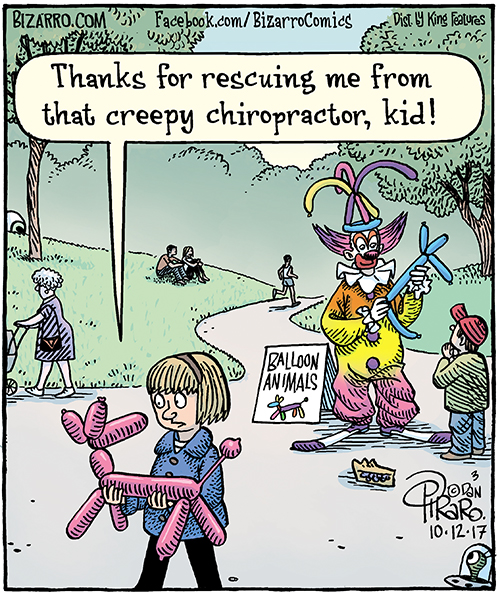 I have no doubt that some of my readers are chiropractors and doubtless many more are chiropractic patients. I don’t wish to offend any of you who are in those categories but a couple of personal experiences with chiropractors and a little reading about the origins of the art have led me to firmly believe it is a pseudoscience along the lines of palm readings and pet psychics. I don’t like clowns, either. I am, however, a huge fan of talking balloon animals, and now you know everything you need to about this cartoon.

I will, however, say that if those things work for you, you are not being injured by them, are an adult of sound mind and average I.Q. or better, and can afford to give them your money, I can offer no reason why you shouldn’t do so.

If you are annoyed by my unwillingness to believe in things that traditional science can find no evidence for, you’re in good company. My beloved Olive Oyl has much to say about the challenges of living with someone limited by the confines of reason.

I will also say that if you intend to add a balloon animal to your family, please adopt one from a rescue shelter and avoid the breeders. 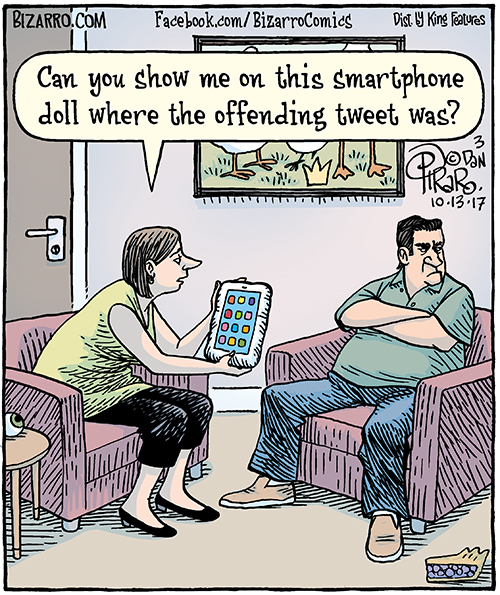 A few people got bent out of shape over this cartoon because it references the kind of dolls that are used by therapists to get children to talk about abuse. I’m not making fun of child abuse, of course, but rather adults who become overly incensed by things said on the Internet. I suppose I am one of those people because I find SO much that is said on the Internet offensive. I’m going to share with you now the ingenious solution I’ve found to that problem: I limit the things I read on the internet. You’d be surprised how much more satisfying life is when you ignore the Internet for a while and spend that time doing something fun or useful in the three-dimensional world your species spent millions of years evolving to exist in. 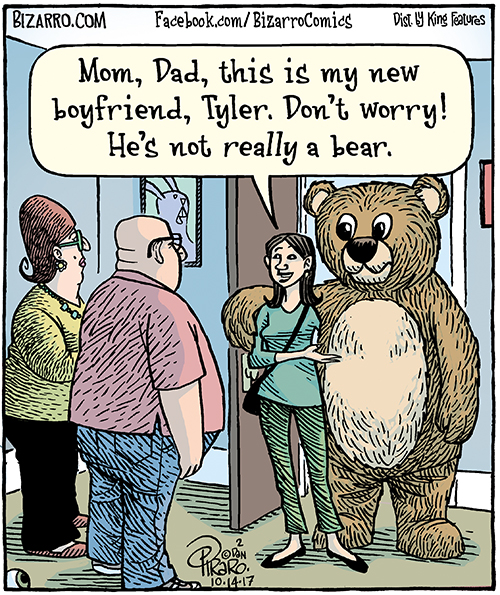 I thought it would be funny if a person was dating someone who identifies as a “furry” and then brought them home to introduce them to their parents. If you don’t know what a “furry” is in this sense, you’re in for a treat and/or shock. There is a growing subculture of people who so strongly identify with stuffed animals and furry things that they dress the part, go to “furry” conventions, and get up to all manner of shenanigans dressed as big animals. I’m sure that sex is a part of it for many, as well. While I have no objections to this kind of behavior as long as nobody gets hurt, I have a natural aversion to people in costumes trying to interact with me in public. They usually exist in the form of mascots and clowns. I count myself fortunate that neither of my daughters married a clown or a furry or someone who could not spot Donald Trump as an ignorant, lying, racist, sexual predator from a mile away.

Thanks for reading, Jazz Pickles. If you enjoy my art and ideas and are reading my work for free on the Internet, please consider tossing a buck or two my direction from time to time via one of the methods listed below. It would be much appreciated!

Until next time, be happy, be smart, and resist stupidity and fascism.

Grab a T-shirt, tote bag, or coffee mug from my store! 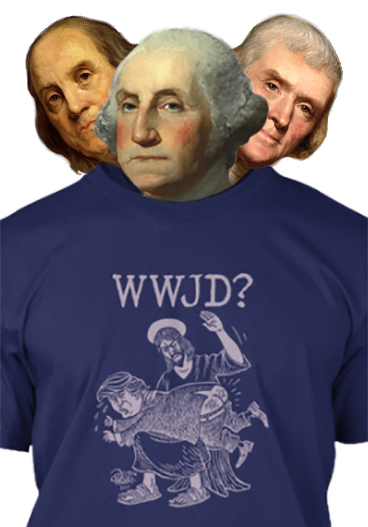 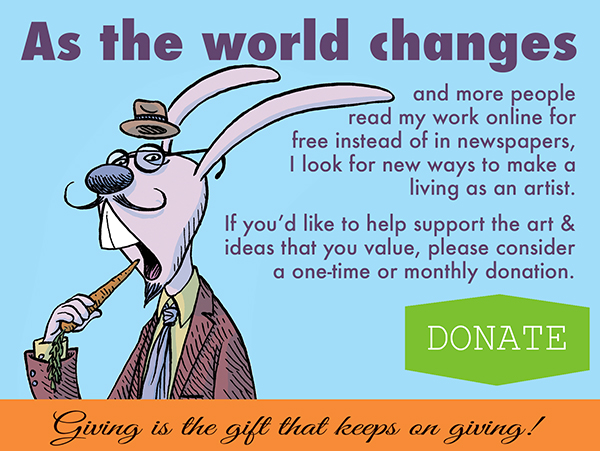 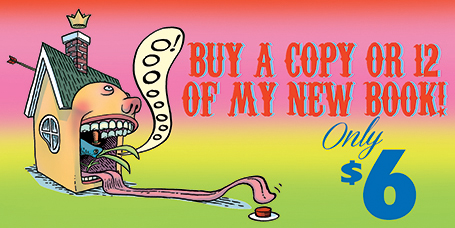 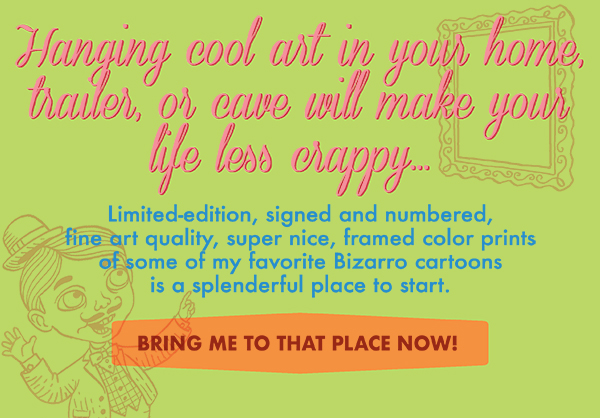