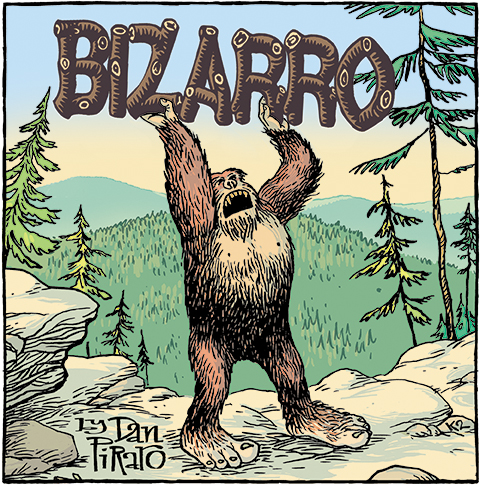 (The embiggenation of some of these images can be caused by clicking on them.) 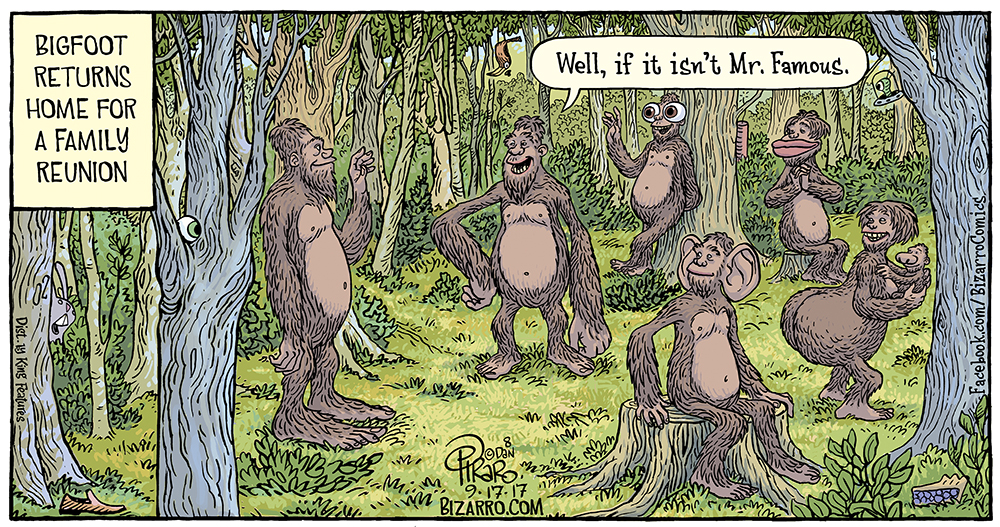 Bizarro is brought to you today by America’s Next President If I Have My Way.

I’ve been thinking a lot about Bigfoot lately, although I’ve no idea why. In the cartoon above, we see that Sasquatch belongs to a family in which each member has one oversized thing. (Get your mind out of the gutter.)

Not long ago, I published a cartoon about Bigfoot and his relationship to Trump. You can see it here. The cartoon inspired me to create a Bigfoot campaign poster and put it on a T-shirt. I’m offering it in several styles and colors, so be sure to poke around a bit and find one you like. I think this design is super fun and a subtle way to tell people where you stand politically. (Way out in the wilderness where it’s safe. Relatively)  As always, your purchase helps keep the lanterns full of oil here at Rancho Bizarro so we can keep poking the Orange Menace with our cartoon swords late into the night. Please also consider forwarding the link to folks whom you think might like the shirt! See the wonderful, aformentioned product here.

Some other funny shirts are in my store, too, so fish around a bit. So far, I have two pages of stuff. Here is my store’s homepage with the rest of the products.

Contrary to what many people think, dogs are not the only pets that do tricks. Cats are very good at disappearing and alligators are excellent at making others disappear.

I’ve never participated in group therapy per se but I’ve participated in a number of support groups, which are very similar except they aren’t normally led by a licensed therapist. I’m a big believer in this kind of thing because when you’re struggling in your personal life, it is so easy to fall into the trap of over examining every miserable aspect of your existence and losing touch with how your life stacks up against others in your community. You may rightly be upset that your husband of 30 years left you for a 22-year-old stripper, but then someone else at your support group tells the story of how they lost their husband and two children to an escaped pet alligator. Suddenly your problems seem a little more manageable.

The benefits of support groups are deeper and more subtle than that, of course, but you get the idea.

Whenever I see people dressed in mascot costumes––whether they’re advertising some commercial establishment on the street or trying to entertain kids or whatever––I always wonder about the person inside. Perhaps it is a teenager and this is an acceptable, temporary job for them, but maybe it’s a formerly successful, middle-aged guy who lost his family to an escaped alligator, became an alcoholic, and can’t hold down a better job. That makes me sad.

It also reminds me of this cartoon from the turn of the century.

A few of my readers have criticized me for doing cartoons about politics in the past year. Some don’t like them because they are pro-Trump, others are just sick to death of politics being in their face 24/7. So here’s a shout-out to show that I sympathize. And I truly, deeply do sympathize in a meaningful way. If I lived in the U.S. right now, I’d be pulling my hair out. On our recent visit there, the Cheeto Mussolini and people analyzing his latest embarrassing tantrum or scandal were everywhere, constantly; bars, restaurants, airport waiting areas, etc. Here in Mexico, I can limit myself to reading a few headlines and stories online and I don’t watch any TV news or video whatsoever. In doing so, I’m able to go many months without ever seeing his face or hearing his voice. It’s a life saver.

This cartoon came from a comment I made while writing a blog post a while back and I figured it might make a good cartoon. Also worth noting is the poster on the wall that says, “The Electoral College and the End of the World” which shows these three steps: 1) Russia meddling in America’s election just enough to get Trump elected via the Electoral College, 2) the American fascist authoritarian facing off against the North Korean fascist authoritarian, 3) a nuclear mushroom cloud. The book on the kid’s desk says, “What is This? The History of Books”.

This cartoon actually happened to me. One day I was at my drawing table and chased with a flyswatter what I thought was an elusive mosquito. I wasted a couple of minutes looking like an idiot before I realized it was a floater in my eye. I was worried this gag might be too soft, not funny enough to relate to, maybe even too vague but it turned out to get lots of comments on social media from others who’ve done the exact same thing. Funny how that kind of stuff works out.

Thanks for reading this week’s roundup, Jazz Pickles, and not just skimming the cartoons in 9 seconds and moving on to Alex Jones’ website to see what institutional insanity looks like.  If you enjoy what I’m doing, please recommend my work to your friends and consider some of the options I’ve listed above and below that help me make ends meet as increasingly more folks read my work for free on the Interwebs.

Till next time, be smart, be happy, be nice.