(To embiggenate any picture on this page, project it onto a large piece of paper and trace it carefully. Or click the image with your computer’s pointing finger thing.)

Before I say anything else, I’d like to remind you that this cartoon was drawn several weeks ago. When I looked at it this morning, I could not help but see it in relation to the use of an automobile as a weapon in Charlottesville last weekend, and I was sorely dismayed by the idea that some people might see a connection. In simple words, this cartoon has NOTHING to do with that incident.

It does, however, have everything to do with how many of today’s teenagers are much better at video games than they are at real life. Of course, with the direction society is going, once the rest of us are old and out of power, the entire world will exist in virtual reality and the vast majority of the world’s population will be sitting around with goggles on being fed intravieneously. By whom, I’ve no idea.

On to funnier matters: I tried to pack a lot of fun into the art on this one. There are 11 Secret Symbols and if you’re not familiar with what that means, this is a great time to look into it. Here’s a list of the 13 official symbols, a few of which I hide in almost all of my cartoons. And––SPOILER ALERT––if you have trouble finding them all or are too busy to search for them, here’s a version of this cartoon with the symbols circled.

Lastly, if you’re wondering what this diner is called, here’s a closeup of the red menu on the counter in front of the old man pouring coffee.

This cartoon is a public service announcement of sorts, reminding people to be careful with their love butter and not to open their jar for someone without thinking it through. You’re welcome. That said, sex is fun if you know what you’re doing, don’t take it too seriously, always use a condom.

Most of us have worked for a rich asshole at some point in our lives and we currently have the king of all rich, privileged, frat-bro assholes in the Oval Office, of course. When I was young and working “normal” jobs, it often galled me that my hard work was doing little more than buying more sports cars and vacation homes for some random jackass I’d never met. Most of us are in that position most of our lives. I don’t have an answer for it, I just like to complain.

Olive Oyl and I have a pitbull mix (Jemima) who loves to play fetch. She likes to chase a rubber bone-shaped chew toy and we’ve been playing this way for a few years. We recently adopted a border collie mix (Monita) who is not yet a year old but is already taller and longer than Jemima, and she totally changed the game. She doesn’t like to play fetch, but she loves to herd. So now I throw the bone as far as I can, Jemima hauls ass to snatch it in her mouth and turns around to run back to me. Monita crouches as Jemima turns back toward us, trots in stalking fashion toward Jemima, then darts out in front of her to stop her momentum, grabs the bone in Jemima’s mouth and struggles with her until she gets it away from her, then takes a few steps away and drops it. Once she’s gotten it away from Jemima, she doesn’t want it anymore.

For reasons unknown, neither of them have any interest in any kind of ball. 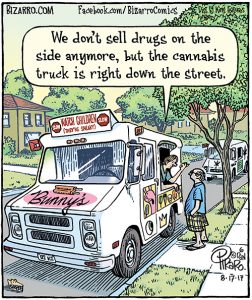 When I was a teen in the 70s, there were rumors that some ice cream trucks sold weed in secret. I have no personal experience to validate it because I was too shy to ask an ice cream truck driver if he had pot, but I believed the rumor and think now that it was certainly true in some places. That memory along with recent changes in the law regarding marijuana inspired this cartoon. It isn’t hard to imagine a time in the not-too-distant future when cannabis trucks will cruise slowly down the street playing Grateful Dead songs and we’ll go running down the block to catch it like we did when we were kids. Another truck will undoubtedly be a block or two behind it selling crunchy snacks.

“…to outlaw (cannabis) in favor of prescription drugs, alcohol, and tobacco is like imprisoning people for possessing plain water and forcing them to drink Pepsi while the population grows fat and sick.”

I’ve expressed my opinion about The Drug War on this blog before but the illegal status of marijuana in most of America and the fact that so many people have been imprisoned for it is one of the greatest injustices in modern history. Cannabis is an extremely useful and harmless, natural product of the planet and to outlaw it in favor of prescription drugs, alcohol, and tobacco is like imprisoning people for possessing plain water and forcing them to drink Pepsi while the population grows fat and sick. And, just when society and the government was coming around to the common sense of treating adults like grownups, the archaic voodoo of the Electoral College has screwed the entire world with this travesty of an administration, and America is heading back to the draconian drug policies of the dark ages with the Keebler Elf who calls himself Jeff Sessions leading the charge. When are we going to wake up as a society and start putting the right people behind bars? These guys would be a great start. 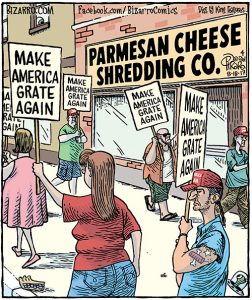 Here’s some fun with stupid red hats that champion idiotic, phony ideals. One good thing to come out of the strife in Charlottesville last week is that people who are capable of understanding reality have been shown unmistakingly that racists have been voting Republican since The Civil Rights Act was signed in 1964, and the Republicans have been actively courting them for their votes for decades. Trump was not the first to embrace these mentally-deficient monsters. We’ve also now been shown that a Nazi sympathizer and white supremacist is in the White House and has several more on his payroll, all of whose salaries we pay as American taxpayers. Tens of thousands of good Americans died to defeat these bastards in WWII and now they run our country. What’s wrong with this picture? 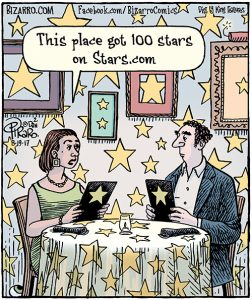 Let’s end today’s rant with a fun little comment on Internet rating systems. If you’ve not seen a TV series called “Black Mirror,” I highly recommend checking it out on Netflix. Each episode is a different story with different characters, Twilight Zone style, about what kind of dark things can (and probably definitely will) happen with the Internet in the very near future. Since there is no need to watch them in sequence, start with the episode called “Nose Dive”. It’s super chilling and I’d bet good money that something very like it will happen in your lifetime. A few of the episodes are a bit “meh,” but most of them are very compelling. I’ve no idea why this show didn’t do better and last longer except for the obvious fact that it is smart and most viewers are not. (For evidence, measure the ratings of Black Mirror against The Apprentice.)

That’s all I’ve got for this week, Jazz Pickles. Thanks so much for joining me and have a good week. Till next time, be happy, be smart, keep your head down, and fight fascism.