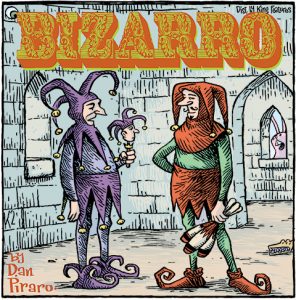 (Be the first in your cell block to : by clicking an image.)

Bizarro is brought to you today by Japanese Monster Mask.

I began writing another long political screed for this post this morning but deleted it. I’m just so tired of the Republican insanity in the U.S. and I need a break. I’ll just say that it’s a tough time in America these days and I feel a little more sick than usual about it today after yesterday’s white supremacy rally in Virginia and the pathetic and self-serving response by The Orange Menace. I’m glad I’m in Mexico where I feel safer.

But now, let’s talk about comedy.

I quite enjoyed writing and drawing the primitive bumper sticker gag above. As my regular blog readers know, I’m a big fan of little-known historical facts and this cartoon is based on a pretty amazing one: bullets were invented before guns. Yes. I know. Weird, huh?

But people didn’t just throw them at each other as the clueless cartoon robbers above are doing. Instead, they would hold one between their fingers like when you’re about to put out a cigarette butt, point it at the target, then tap the circle thing on the bottom with a pointy hammer and cause it to fire. In fact, the modern bumper sticker so popular with NRA folks––If guns are outlawed, only outlaws will have guns––actually came from a popular bit of graffiti from the Middle Ages: If hammers are outlawed, only outlaws will have hammers. And carpenters, of course. Carpenters need hammers for perfectly respectable and beneficial tasks and if we outlaw hammers, they’ll have to buy them from criminals on the black market and who wants to put carpenters through that unnecessary risk?

So they kept hammers legal, and bullets, and then people invented guns, and centuries later when most people didn’t need them for everyday things anymore, civilized countries outlawed the ones not designed for hunting food or used in the military. Except for the United States, where people who are worried that the government will force them to be nice to people they don’t trust (like homosexuals or foreigners or people with dark skin or college professors) hoard them and will vote for any despicable moron who promises to keep them legal.

This cartoon also has six secret symbols which can be better seen if you embiggenate the image.

So all the way last Monday I published another cartoon about gun stuff but this one isn’t particularly political. It’s just a funny alternate meaning of “gun show”. Real gun shows take place all over rural America every weekend and are basically big buildings full of two things: 1) machines designed to kill large numbers of people extremely quickly, and 2) people who are obsessed with being able to quickly and effortlessly kill people whom they believe want to do them harm. It is the manifestation of a culture of fear of the government, of criminals, of foreigners, of other religions, of people who don’t celebrate Christmas, etc.  I suspect you’d be hard pressed to find a larger group of scaredy cats than gun fanatics.

I’m not a fisherman but I’ve heard that fly fisherman like to make their own lures, which is something I’d definitely be into if I was a fisherman because I like to make things. The guy in this cartoon gets the ultimate compliment by having created a lure that fooled a real pro like the Creature from the Black Lagoon.

Someday perhaps I’ll draw a cartoon that explains why a giant amphibian-type thing is sexually attracted to human women. I mean, no human man would ever be attracted to a female Black Lagoon creature, would he? Come to think of it, that’s probably already a known sexual fetish, so never mind. 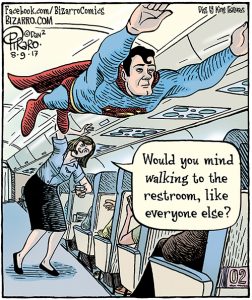 You may well ask why Superman is taking a commercial flight in the first place. It is simply so he can watch a movie while flying across country without worrying about running into anything. By the way, Superman’s favorite movie is The Apple Dumpling Gang.

If you’re not old enough to remember what life was like before smartphones, you may be surprised to learn that people didn’t just walk around staring into mirrors and shouting out their every passing thought or activity to everyone within earshot.

This cartoon ignited another political firestorm on my FB page. Some say the Electoral College did exactly what it was supposed to do by allowing a small minority of uneducated people’s votes to count more than everyone else’s, others say the system was partly designed to do the opposite by allowing a few smart people to deny a smooth-talking crazy person from being elected by idiots. I don’t want to get into that because the subject of politics has already caused my head to explode 17 times just since yesterday, so instead…here’s a little game:

There is a major error in this drawing, which you’ll need to embiggenate to find. You can do that by clicking any of the four buttons on George Washington’s coat. Anyone correctly identifying the error in the comments section of this post will receive a special gift within the following 24 hours. The gift will be invisible but can sometimes be heard, and will have an odor which can vary from mildly to extremely unpleasant.

I’m not kidding, there really is a major error in this drawing. Here’s the answer to what/where it is, but if you click this link you don’t get the special gift. 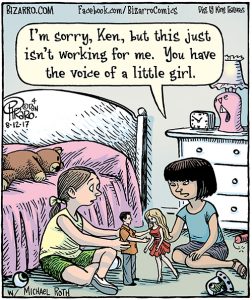 When I posted this cartoon on social media I included a sarcastic disclaimer about not meaning to offend adult men with high speaking voices. Some folks took me seriously, but one reader added to my satire by suggesting that Barbie was being presumptuous by assuming Ken’s sexual identity in the first place. Thanks for that, you made me laugh.

As the father of two daughters, I’ve seen both Barbie and Ken naked on numerous occasions and I can tell you that if either of them has any sexual identity at all, it’s pretty inscrutable. Ken and Barbie, that is. Not my daughters.

I’ve got to run Jazz Pickles, but thanks for coming along with me on this thing I do every week. Until next time, be happy, be smart, be nice.