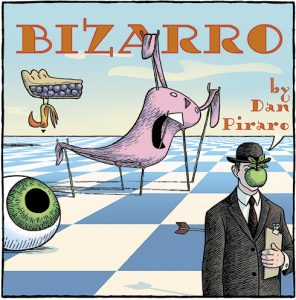 (Use the embigennation feature* to find the hidden funny background stuff in these cartoons.)

*To embigenate an image, click on any solid object within that picture. 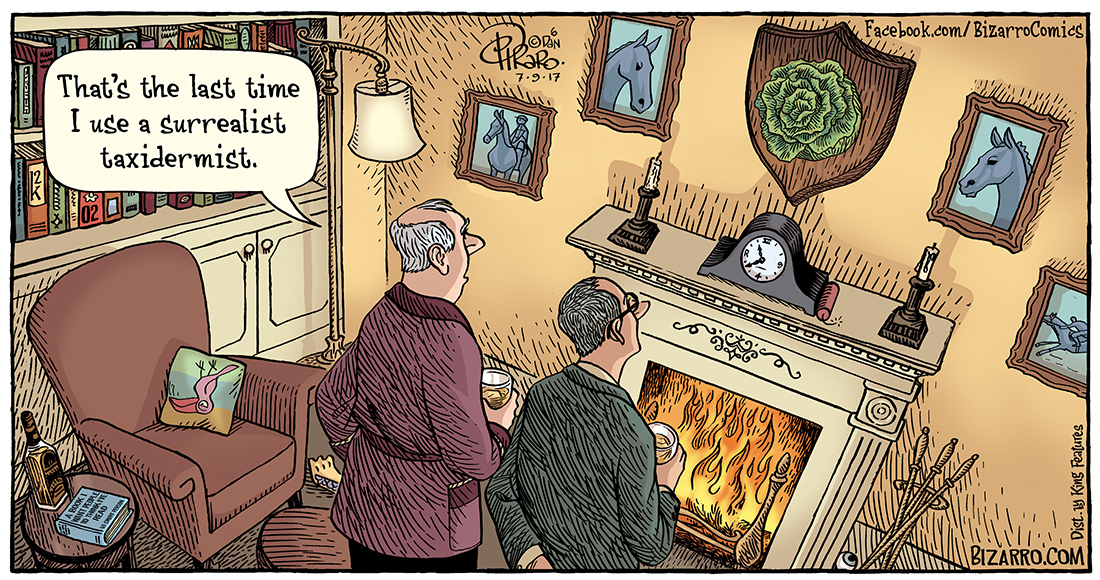 Bizarro has been brought to you today by Surrealism.

If you’re not familiar with surrealism or have heard of it but are not completely sure what it is, here is an explanation. Some would say that my cartoons are surreal because they typically illustrate very odd things happening to otherwise normal people, and they’d be right because that’s surrealism in a nutshell. For instance, today’s extra-wide-hootenanny-of-hilarity Sunday comic shows two men regarding a head of lettuce mounted on a wall. That’s not something one encounters on a daily basis. Another example of things not encountered diurnally is a mainstream, syndicated cartoon (Bizarro) that publishes cartoons on two subsequent Sundays that both feature heads of lettuce as their main subject. Search every Garfield cartoon back to the Middle Ages and if you don’t die from Repetitive Predictability Syndrome, you won’t find that.

To find out what I said about last week’s lettuce cartoon and the other six cartoons from that week, looky here. 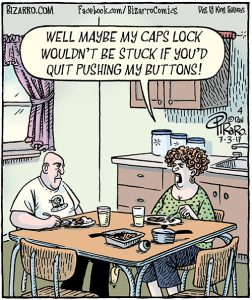 There is nothing too terribly surreal about this cartoon of a “happily married” couple having a casual exchange in their kitchen. Or is there? Is it surreal for a woman to address her word balloon as though it were real? If she’s supposed to be a real person, it is. If she is supposed to be a cartoon character, it isn’t. 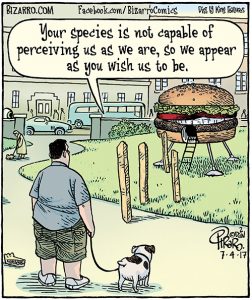 Let us now discuss the surreal aspects of this cartoon. If a man is confronted in a city park by a flying saucer and creatures from another planet, you could say that is surreal, but most people would probably call it science fiction first. But if the flying saucer and alien creatures look like a hamburger and fries, you’re firmly back in the surreal category, with a small side of science fiction.

But wait. How would the cartoon change if the person and the dog were both alarmingly thin, as though they hadn’t eaten regularly in a very long time? One might then conclude that though the cartoon is surreal and has elements of science fiction, it may also be trying to make a social statement. And that social statement would be something about how pretty much nobody walking a dog in a city park in the U.S. would be that thin since crappy, high-calorie garbage fast food is so abundant and inexpensive. Plus, they could just eat the dog.

Okay, now this cartoon has just gotten way too complicated. Let’s move on to the next cartoon, which is super simple. 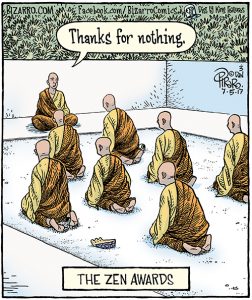 Here we have a number (8) of what appear to be Buddhist monks in either a zen garden or an enormous cat litter box. If it’s a zen garden, this cartoon probably cannot accurately be pronounced surreal. If, however, there is a giant cat somewhere just out of the frame preparing to poop on the monks, or a giant dog about to eat the monks because it thinks they are cat turds, it probably is. Let’s see if the words in the cartoon give us any clue about the cat and/or dog theory. No. They don’t.

So we don’t have a definitive answer about this cartoon and that’s one of the fun things about art; it can be lots of different things or nothing at all. When you think about it, that’s kind of zen, isn’t it?

I posted this cartoon on social media earlier this week with a funny comment. If you don’t already follow me on Twitter (@pirarobizarro) and Instagram (danpiraro), please consider doing so. I post cartoons on those platforms but also other strange photos from my real life, which is occasionally fairly surreal. 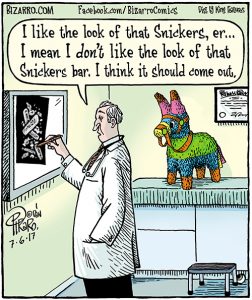 Okay, let’s see if you’re ready to use what you’ve learned and judge for yourself whether this cartoon is surreal or not. I’ll give you a few moments to consider it and come up with your answer before I continue typing. That’s enough time, go ahead and say your answer into your computer or mobile device. My Internet connection is a little spotty today so you may have to shout.

If you said “Yes, this cartoon is surreal” you’re wrong because this is not a strange thing happening to an otherwise normal person. This is a cartoon about a mentally disturbed person pretending to be a doctor who has x-rayed a piñata and is about to pretend to perform surgery on it so he can eat a Snickers bar. It’s more sad than surreal, really, and definitely not funny. It is not cool to make jokes at the expense of the mentally ill. 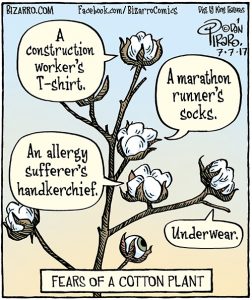 There is no point in doing that exercise again with this cartoon about cotton plants because it is too easy. Cotton plants cannot speak in the real world, so this is definitely surreal. Scientists have recently discovered, however, that plants have very real fears of where they might end up, so that part is not surreal at all. Six months ago that would have been surreal, but now it is just science.

One thing I realized from drawing this cartoon, though, is that pretty much everything we use cotton for has the potential of being pretty gross. Whether used for clothing or furniture or utilitarian objects like bandages, towels, Q-tips, cotton balls, throw rugs, etc.––it has a very real chance of coming into contact with bodily fluids or at the very least farts. Because of this cartoon, I have a newfound respect (and pity) for cotton.

There’s one more cartoon after this quick message from the Bizarro Bunny: 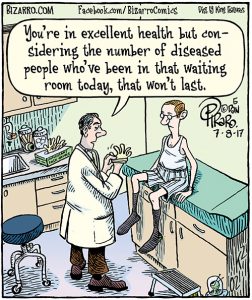 I rarely do two doctor cartoons in a week but since the previous one is only a crazy guy pretending to be a doctor, this week I did. And this cartoon is not at all surreal, it is just true and therefore kind of scary and depressing. The moral is never go to a doctor. It could be dangerous.

One last thing to reward you for reading the copy in this post and not just blasting through the cartoons and racing to another web site like a mindless, web-addicted boob: don’t miss the name of the book on the table in the first cartoon at the top of this post, the one about the lettuce. If you still can’t read it after clicking on that cartoon, click here and I’ll show you an embiggenated view.

Thanks so much for sharing this time with me, Jazz Pickles. I recently found a local plant here in Mexico which produces “buttons” that upon ingesting enable me to see and interact with each one of you as you read my posts, so that’s been a real added thrill for me.

Until next time––be happy, be smart, be nice.