The NCS Reuben Awards in Portland

Memorial Day weekend was pretty exciting this year for many reasons: first (the obvious one), because I was up for an award. Also, because it’s virtually the only time I get to schmooze with so many of my cartooning friends. Third, because there were some heavy-hitting speakers (Hello? Matt Groening and Lynda Barry!). And finally, because it was in Portland, OR, the “it” city I’ve always wanted to visit.

So Mike and I flew west and tried to pack it all in. We failed miserably — didn’t see as many of the sights as we wanted  — but we’re pretty damn sure we’ll be back. We did take a boatload of photos this year, so prepare yourself. Here’s the pictorial itinerary.

Thursday morning: my first board meeting. Yes, folks, look what I got myself into.

See that red tag? I’m officially a National Cartoonists Society board member (VP of BS?). Actually, I’m stoked. They must have taken my type A personality into account. I will definitely do my best to get s**t done. Here’s a nice pic of myself, fellow board member & sister-in-cartooning, Maria Scrivan, and Kevin Segall of Collector’s Shangri-La before the business meeting (click on photos to enlarge): 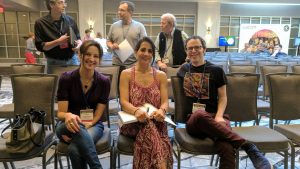 Thursday afternoon: My husband Mike and I explored downtown Portland with fellow cartoonists. By the way, cartoonists are like barnacles: we attach ourselves to the nearest living creature with a sense of direction and go along for the ride. In this case, it was Mike.

First, we made a pit stop at the iconic Voodoo Doughnut (tourist’s note: go to Voodoo for the spectacle, but get your doughnut appetite fulfilled at Blue Star). Here’s one of Maria and me outside Voodoo. 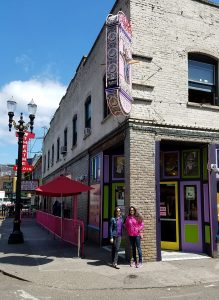 I walked off my Butterfinger doughnut by hiking to the Japanese and Rose gardens. Here we are, a bunch of wayward cartoonists in the wild, outside the Japanese Garden entrance. From left: Mike, me, Maria, Daryl Cagle, and Hilary Price (not yet pictured, Dave Coverly, whom were were meeting): 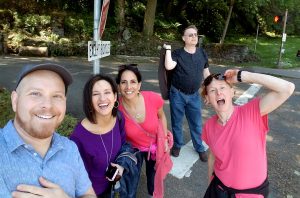 We lost Daryl a little later and gained Dave Coverly: 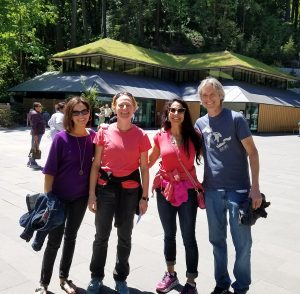 Much fun was had and many hijinks ensued the rest of the afternoon (sorry, no details will be divulged).

On return, I ran into Jan Eliot. I just had to post this photo because — cartooning aside — she’s simply one of my favorite people to spend time with.

Thursday night: Wacom headquarters hosted a nice, informal cocktail party for the NCS. There was a fun drink-and-draw of sorts. Many of us participated in games conducted on Wacom’s state-of-the-art drawing tablets. My theme: “Draw America today, as if it had lost the American Revolution.” After a few drinks and only 5 minutes to draw, this is what I came up with (note how the sketch quickly deteriorated from left to right as I frantically tried to finish in time):

And here’s one right after (or maybe before?) the party, with Peter Gallagher, Jeff Knurek, Dave Blazek, and Eileen Blazek. Not sure why it looks like there’s a spotlight on us, but just go with it. 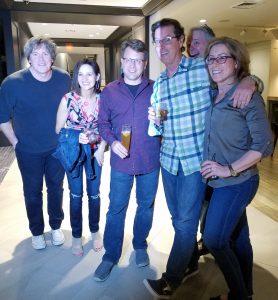 Friday morning: a main highlight of the trip. Many cartoonists were bused to Doernbecher Children’s Hospital to draw for the kids there. Always a rewarding, moving experience. I learned quickly that I enjoy drawing characters from “Moana,” which I was instructed to do by some small patients. Here’s a little montage of pics from that morning. (Top photo from left to right: Jan Eliot, Patrick McDonnell, Tom Stemmle, myself, and Jeff Knurek)

Friday afternoon: More barnacles joined Mike for another stroll in downtown Portland. Our main destination: Powell’s Books. My “book twin,” Mark Parisi (“Marty Pants”) and I signed some stock and toured around. 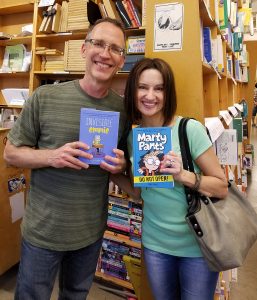 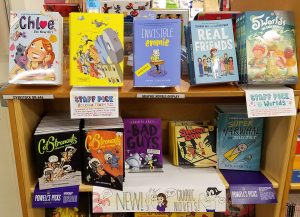 We even bumped into Mo Willems, who was acting like a civilian in a bookstore for once. He showed us his finds. (From left: Mo Willems, Mark Parisi, Jeff Knurek, myself)

A few blocks away, I finally found my Reubens banquet garb in a saucy window display. (not shown: whip and gimp accessories) Check! 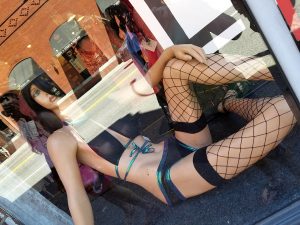 Here’s a montage of some other random Portland sights:

Friday night: once again, the nice folks at Wacom hosted a slew of cartoonists for the NCS annual Welcome Cocktail Party. Here’s our selfie attempt from the rooftop balcony: 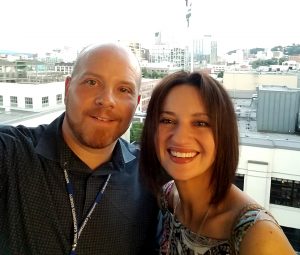 With “Cartoonist of the Year” (and someone I really admire), Ann Telnaes. 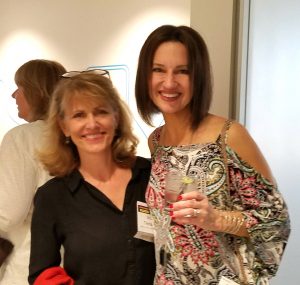 With another renowned cartoonist, Wily Miller. (I took this pic specifically for my brother, who is a huge fan of Wily’s work.)

Saturday: Another highlight of the trip was hearing some incredible speakers. The first was a round-up of Simpsons giants: Matt Groening, David Silverman, and Tom Gammill. The banter and visuals were as funny as you’d expect. Apologies for the blurry photo. 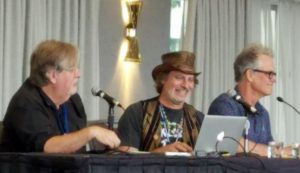 My own personal highlight was seeing Lynda Barry, the most influential cartoonist of my (young adult) life. I even erupted in tears while waiting to meet her (classy, Terri). Despite my fangirl breakdown, she was incredibly sweet to me. And wow — what a speaker. Here’s my post-breakdown photo op: 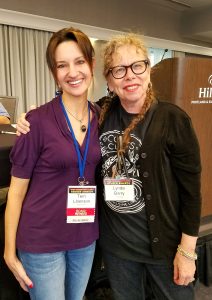 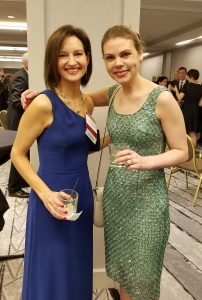 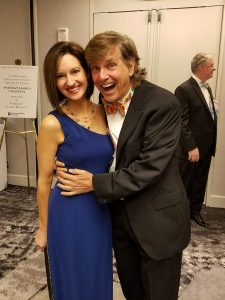 Aaaand some more. With Hilary Price, and Maria Scrivan. 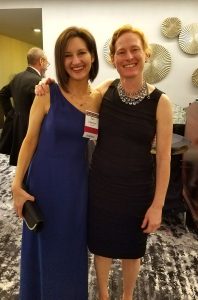 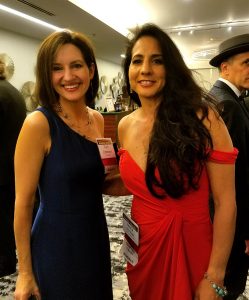 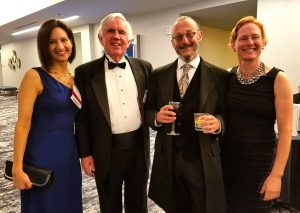 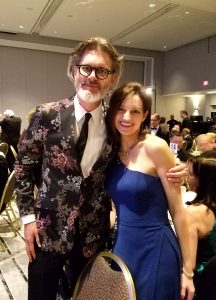 More! Top to bottom: with Brian Walker and David Silverman (yes, I just earned my coolness cred there). With Jerry Scott and Rick Kirkman. Opening remarks by NCS prez Bill Morrison and his wife, Kayre Morrison. With Jeff Parker and his hardware after the ceremony. 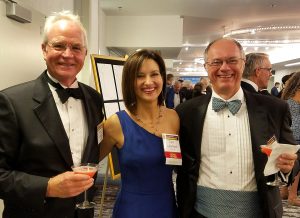 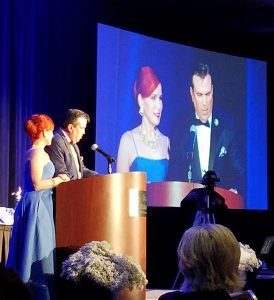 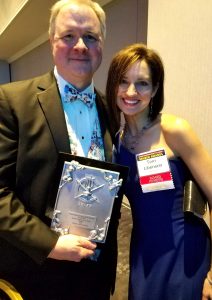 Nope, I didn’t get the prize this time, but Mike and I had a blast. As usual, the weekend was too short. Looking forward to more schmoozings with this fun, warm crowd. In the meantime, here’s one last pick with some talented fellow “losers,” Mark Parisi and Sarah Anderson. 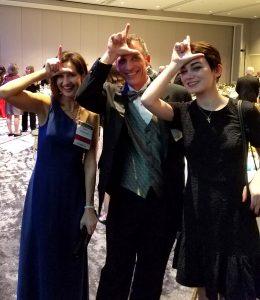