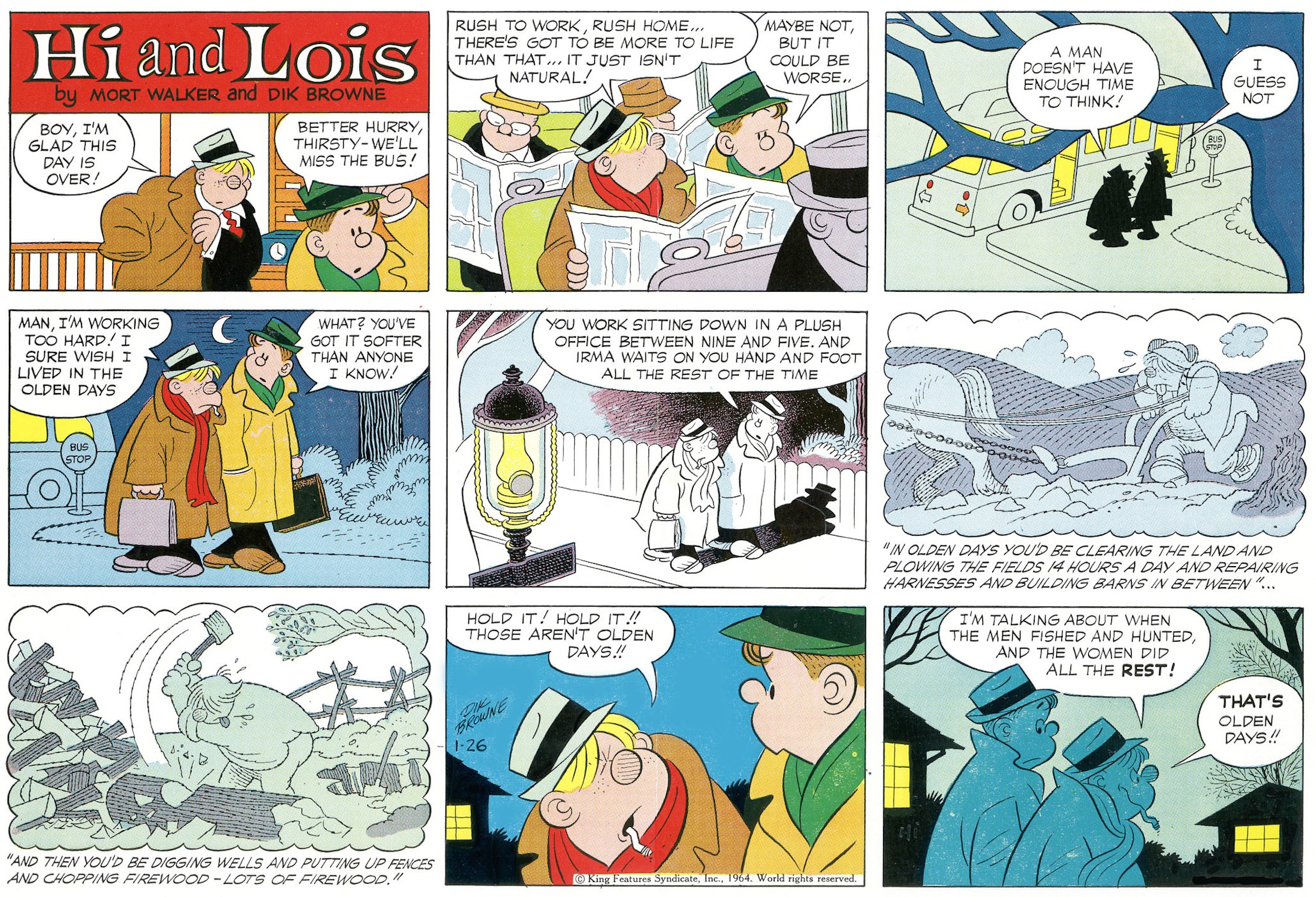 Hi and Thirsty are best buddies and next-door neighbors. They’ve known each other since childhood. They work in the same office, take a bus home together and complain to each other about their problems.

This classic episode features many aspects of their relationship. At first Hi is sympathetic to Thirsty’s griping. But he eventually has to give Thirsty a reality check about how easy he has it. Hi describes life in the “olden days” as being much harder. Thirsty has a different picture of the past. He’s not completely wrong. Primitive hunter-gatherers did work less than modern office workers, but their life expectancy was much shorter.  Women were just as important in the division of labor as they are today.

Dik Browne once described his drawing as a “form of crocheting.” This episode is another good example of his remarkable craftsmanship. The aerial perspective and silhouetting in panel #3 shows Hi and Thirsty returning home. Panel #5 sets the mood with some very dramatic lighting. The distinctive line technique and coloring in panels #6 and #7 set them apart from the rest of the page. The profile of Thirsty with a cigarette hanging out of his mouth in the last panel helps deliver the gag. Each scene is a mini-masterpiece in composition and helps advance the story.

This is the first installment from 1964 in our Timeline series. Stay tooned for more.

Chaplain Staneglass became a regular character in Beetle Bailey during the late 1950s and still appears today. Mort Walker created him because he felt the men at Camp Swampy needed some moral guidance. His struggles and failures to make them behave properly is a good source for humor.

The Chaplain Corps of the United States Army is comprised of ordained clergy representing multiple faiths. They are commissioned Army officers and are often assisted by enlisted men. Their purpose is to offer religious worship services, counseling and moral support to the armed forces in both peacetime and war.

Here is what Chaplain Staneglass looked like in 1962. He hasn’t changed much over the years.

The Chaplain has a number of different functions in the strip. He encourages the men to attend services on Sundays. He often bores them with his sermons. He has helped Beetle escape from Sarge by providing him sanctuary in the church. He prays earnestly for survival before eating Cookie’s meals. He discusses personal issues with the men. He tries to temper Sarge’s more violent tendencies.

Sometimes the Chaplain has to deal with his own inner demons, as in the episode above.   To set a good example for the men he needs to contain his anger in situations like this. In the end he manages to control himself but gives Beetle a stern rebuke.

This is the first Sunday page from 1964 in our Timeline series. Check back next week for a new installment.