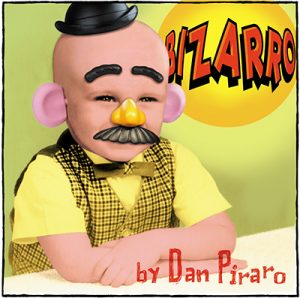 (One may embiggenate any image herein by placing the cursor within that image’s borders and activating the device that triggers the cursor to act.) 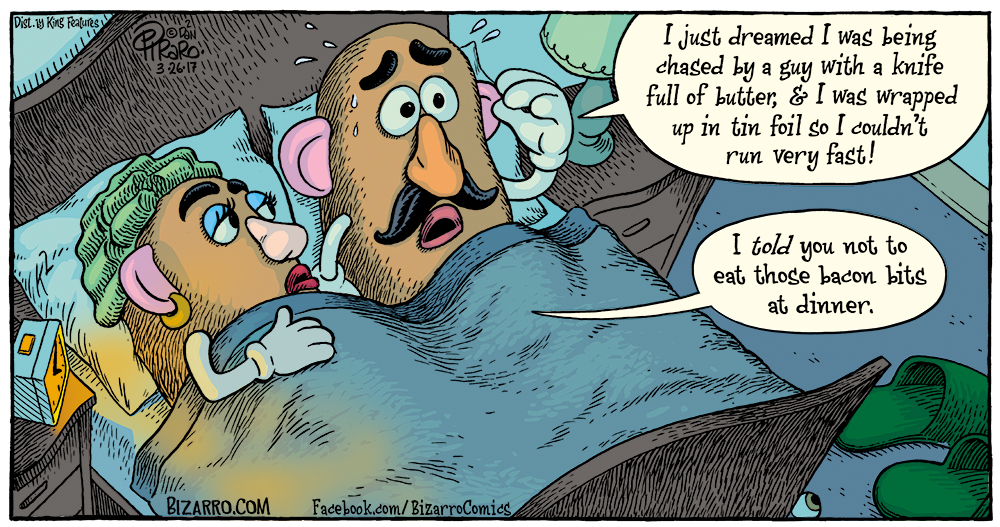 Bizarro is brought to you today by Why I Became An Artist.

Mr. Potato Head is an almost endless wellspring of cartoon ideas. I’ve done quite a few over the years, including this very racy one from two weeks ago that I still can’t believe didn’t get censored by any of my newspaper clients, and this one, which is one of my favorites from my entirely-too-long cartooning career. I like this one, too, for slapstick reasons and this one because of its absurdity.

And, the title panel for today’s cartoon (top of this post) is an altered version of a photo of yours truly when I was about three years old. 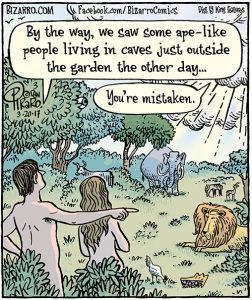 My first cartoon from the past week is a bit of fun with the Garden of Eden myth. One reader wrote to ask me if I was lampooning the way the Trump Klux Klan and right-wing media tell people completely unmitigated, irrational lies and they believe them. To be honest, that was not on my mind but it is a terrific analogy.

The human mind has an almost insatiable need for myths, and not just in the realm of spiritualism; many of them have to do with politics and leaders. There is no other explanation for the fact that millions of the American poor and working class believe(d) that an old man who demonstrably built a fifty-year career in business by abusing the poor and working class suddenly intends to be their savior. The disastrous health care bill they tried to pass last week was a perfect example of how much current-day Republicans care about the working class. 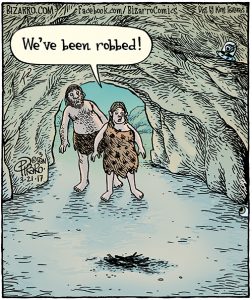 I’m not sure how successful this cave cartoon is. I liked it when I first drew it but it doesn’t work very well for me now. I’m hoping your results vary. 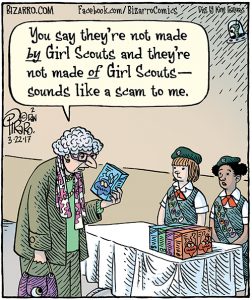 Old ladies can be such bitches, am I right? ( I said “can” be. Many are quite lovely and sweet.)

This cartoon is quite strange and I like that, but even stranger is how it appeared in one California newspaper. I didn’t find out what had happened until a few readers sent me FB messages about it, but apparently this cartoon was edited at just this one newspaper to this version. (It’s not about it being in strip format rather than panel format, I offer both to all my client newspapers.) You’ll notice that the cartoon is the same except that the “G” is gone from the word “God”. Which is rather “od”.

I suppose it could be an accident but it is hard to imagine how. My guess is that they removed the letter to avoid offending religious nuts who are incensed by the use of god in comics. (Of which there are more than you would think and I’ve got the hate mail to prove it.) If that is true, I think this is the kind of way-over-the-top, nonsensical liberal pandering that drove a lot of not-big-city folks to vote for Trump. Just my opinion, of course.

On the other hand, there’s no arguing the fact that we live in a world where people are murdered every day in the name of imaginary people in the sky, so maybe it pays to steer absurdly clear of religious nuts of any stripe. 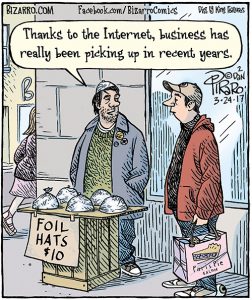 I particularly like this cartoon and it says a lot about today’s electorate. Someone on one of my posts made the point that foil hat nuts reside on both sides of the political aisle but I don’t think you can effectively argue that the vast majority of conspiracy nuts don’t belong to the right wing of American politics. I’ve not done a deep dive on this but I think it is because the Republicans made a conscious effort to court them a couple of decades ago. The modern Republican party doesn’t have policies that help anyone but the extremely rich and corporations, and there aren’t enough of them to elect anyone to office, so they consciously began some time ago to find more conceptual ways to appeal to voters on topics like Christianity, “family values,” terrorism, and crime (abortion rights, the supposed “immigrant threat,” the ridiculous “War on Christmas,” marriage equality, Planned Parenthood’s supposed plot to kill babies and sell their parts to mad scientists, etc.)  In doing so, they’re happy to pander to anyone, including people on the fringes of reality who believe just about any crazy idea you could possibly dream up. I mean, when all of your policies are bad for anyone making less than a million dollars a year, you have to find something to get people excited about. Fear of “the other” is an ancient and very successful method. 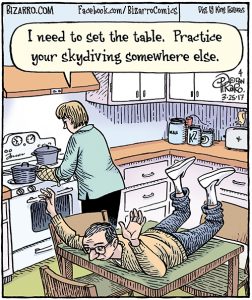 Finally this week, we have this daring gentleman who is diligently practicing his dangerous pastime. I skydove once (not a word but should be) and I found it exhilarating. The moment I stepped up to the open door of an airplane and told my body to jump out of it into thin air and every molecule of my being screamed back at me is one I will never forget.

Thanks for spending this time with me, Jazz Pickles. I always enjoy talking to you about my cartoons and hearing about which ones you enjoyed (or didn’t) in the comments section. As the world changes and more people read my work online (for which I do not get paid) instead of in newspapers, I look for new ways to make a living as an artist. If you’d like to help support the ideas and art that you value, please consider one of the options below. My beloved Olive Oyl and I will thank you as we continue to live indoors and eat daily.

Grab a copy or several of my new book, full of crazy groovy art and only $6. (Buying it from any site that sells books is fine, doesn’t have to be the one I linked here.)

Make a one-time donation or a monthly contribution to the good people at Rancho Bizarro (there are only two of us––my beloved Olive Oyl and me) who fearlessly bring Bizarro to you 365 days a year in spite of the obvious dangers of publicly attacking a powerful, thin-skinned, authoritarian egomaniac. Any amount is appreciated.

Buy a print of any Bizarro cartoon you can find by using the calendar function on Bizarro.com. Starts at around $25.

Buy a larger, limited-edition, signed and numbered, archival, color print of one of my personal favorite Bizarro cartoons from an LA art dealer. ($200) They also sell some of my original ink drawings from Bizarro. ($1000)

Until next time, be well, be smart, be nice.