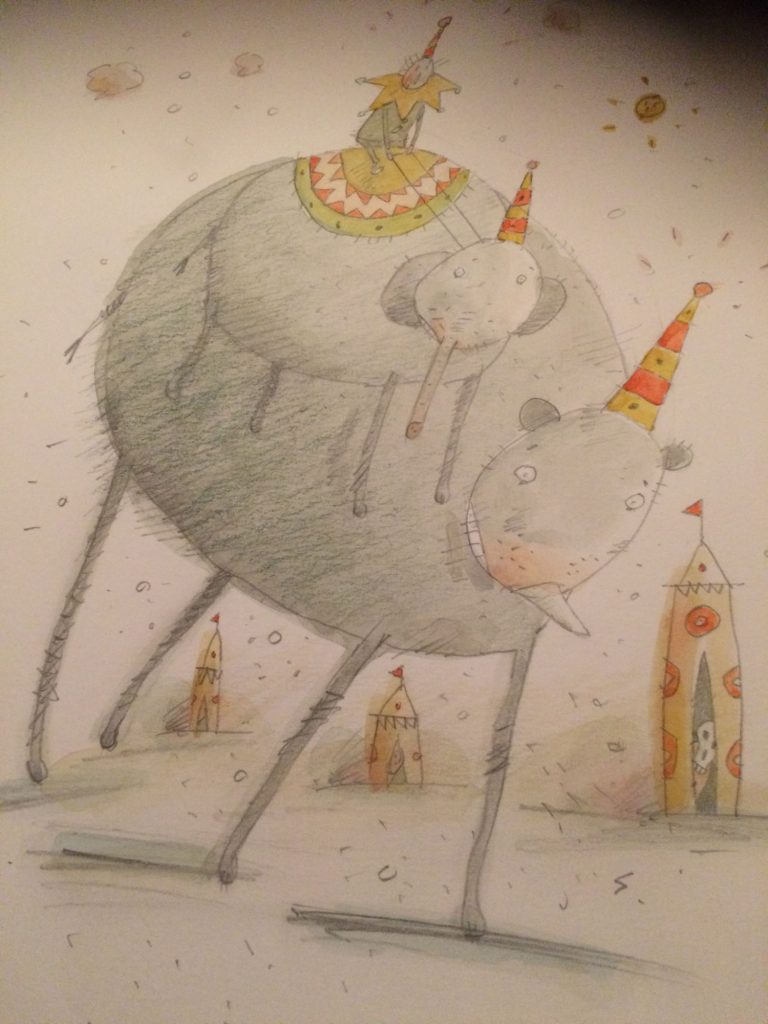 Hi Folks!
I’ve taken a break from the care and feeding of my driveway to send out a newsletter on the latest happenings.  If the plow goes by again, and with it a foot high of icy crud, I will be back in a minute.  Actually, thirty minutes, which will be sweaty and laden with swear words.

I’ve known Elwood Smith’s work from Parade Magazine and Reader’s Digest since I was a kid.  Turns out, he lives an hour west of me.  A field trip was obviously in order.   It’s always great when you meet an artist and you like their personality just as much as their work– Elwood is awesome!

When he’s not illustrating the science section of The New York Times, Elwood’s been focusing on personal drawings under the theme Death At The Circus. 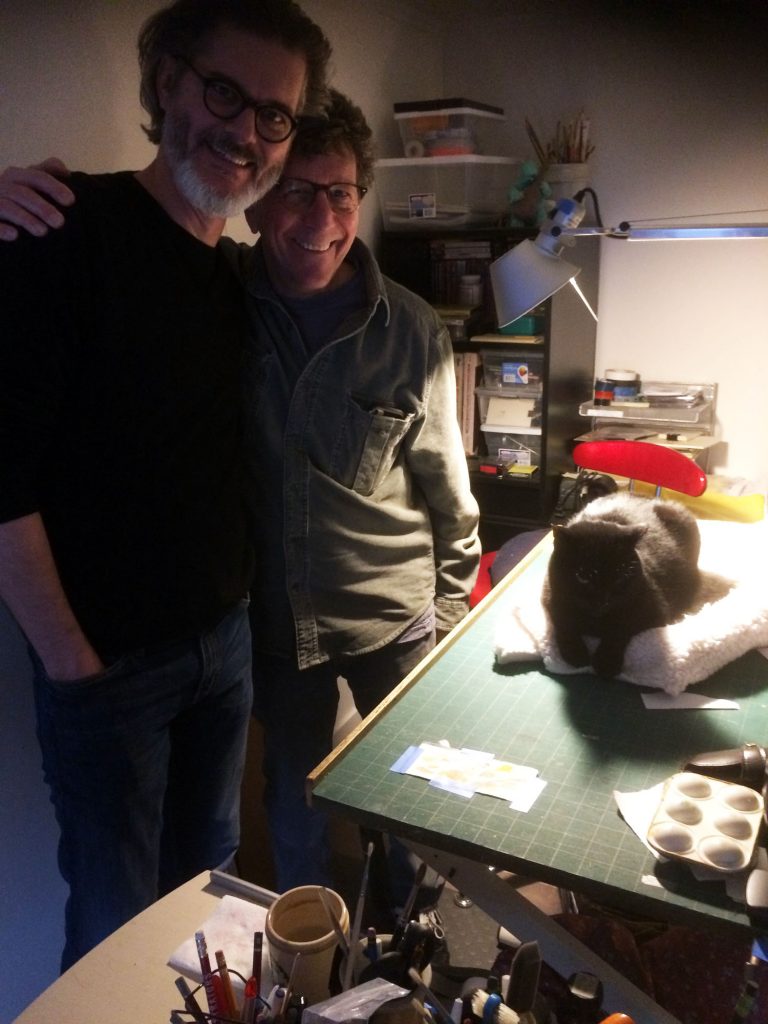 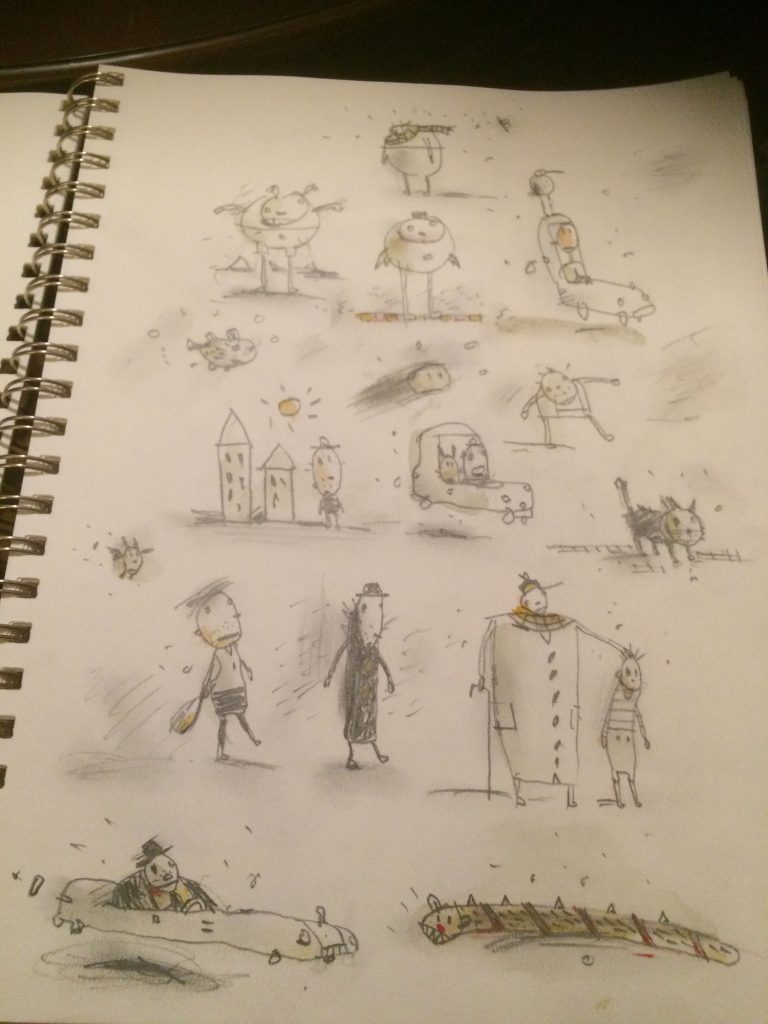 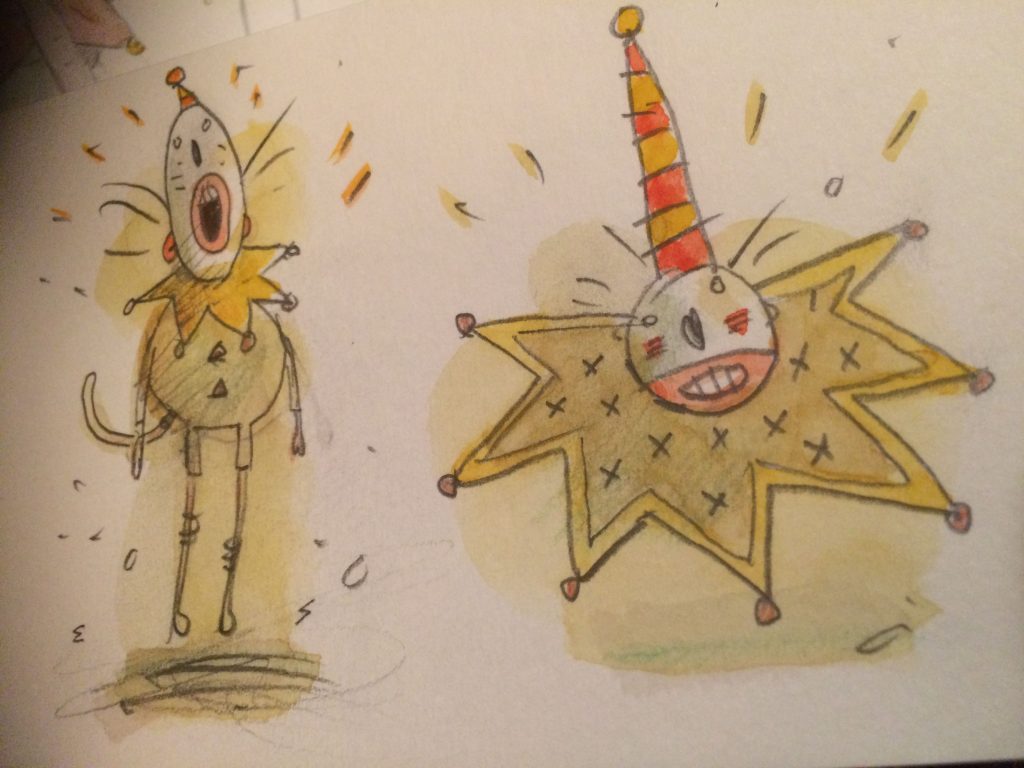 Going To The Movies

When my movie pal had to cancel our date to see La La Land a couple Tuesdays ago, I decided to go solo.  I had no idea idea how solo.  That’s my jacket. 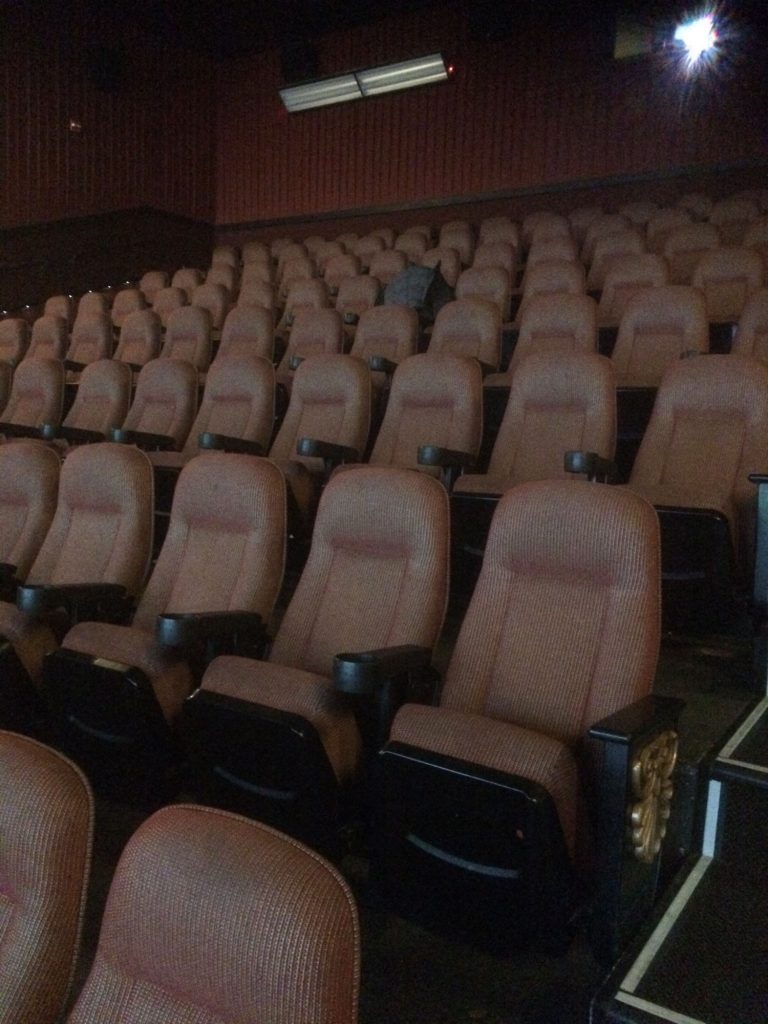 I decided NOT to turn my phone off, even though the previews warned me again and again.  Since this evening was turning into a “me” date, I followed it up with some glamorous shopping:

If you ever wanted to try your hand at drawing a single panel cartoon, I will personally teach you.  The class is online, but you don’t have to be present for a lecture.  Read today’s lesson on your own schedule and then get your homework in to me that night.  We go over how to come up with ideas and how to craft a cartoon. I will be clear, yet firm…

Instead of your living room, this will be at The Center For Cartoon Studies in White River Junction.  Check it out!

I now draw my strips on a Cintiq Companion, and just got this nifty drawing glove so the fleshy part of my palm doesn’t bother the touch screen. I feel like one part Michael Jackson, one part Phantom of The Opera.  Here- I’ve dressed it for you. 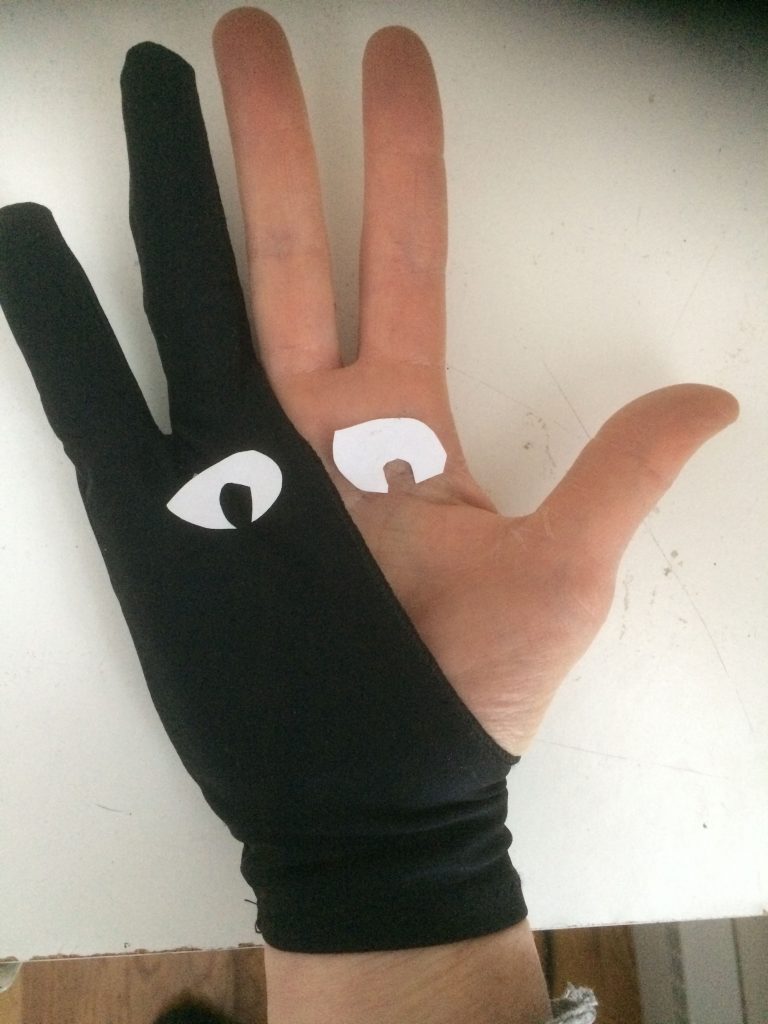 One of the reasons I like international editorial cartoonist is that they are really good at using no words, so the message can cut across different languages.  Here are a few I saw at the Society of Illustrators exhibit in New York around the holidays. 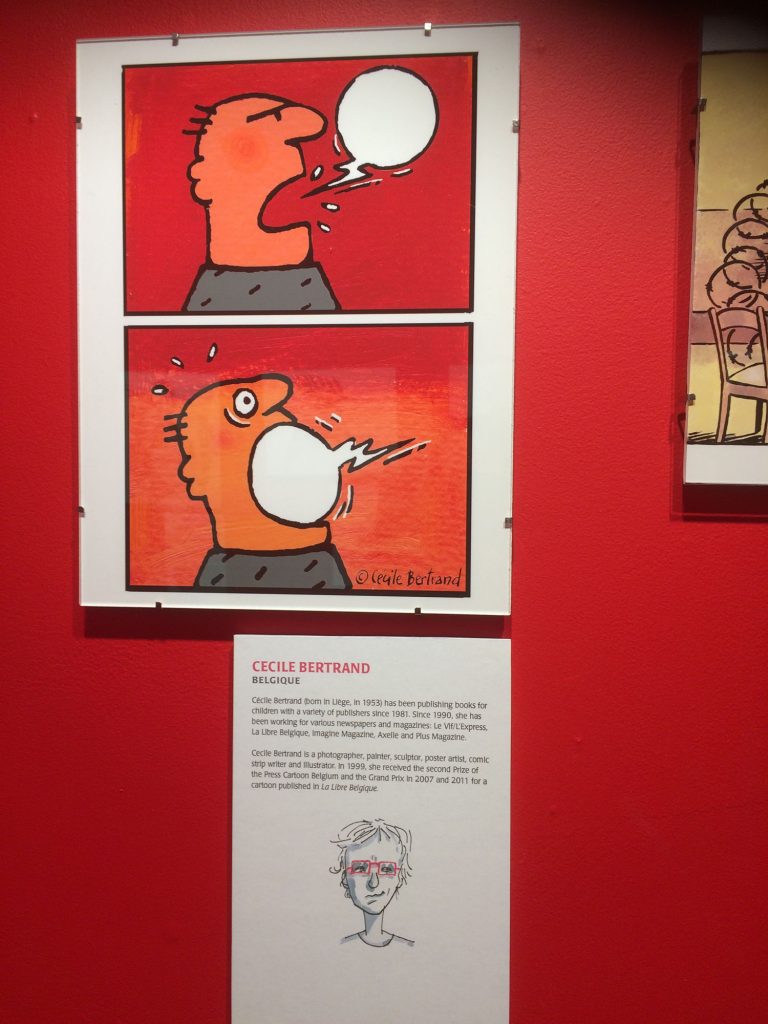 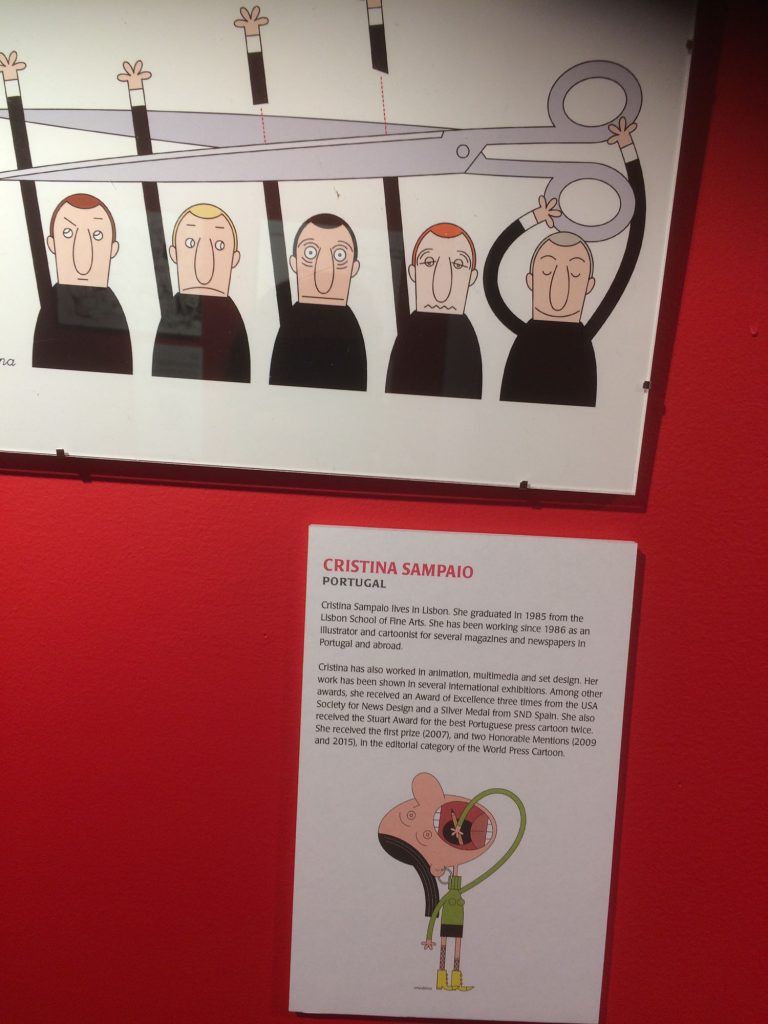 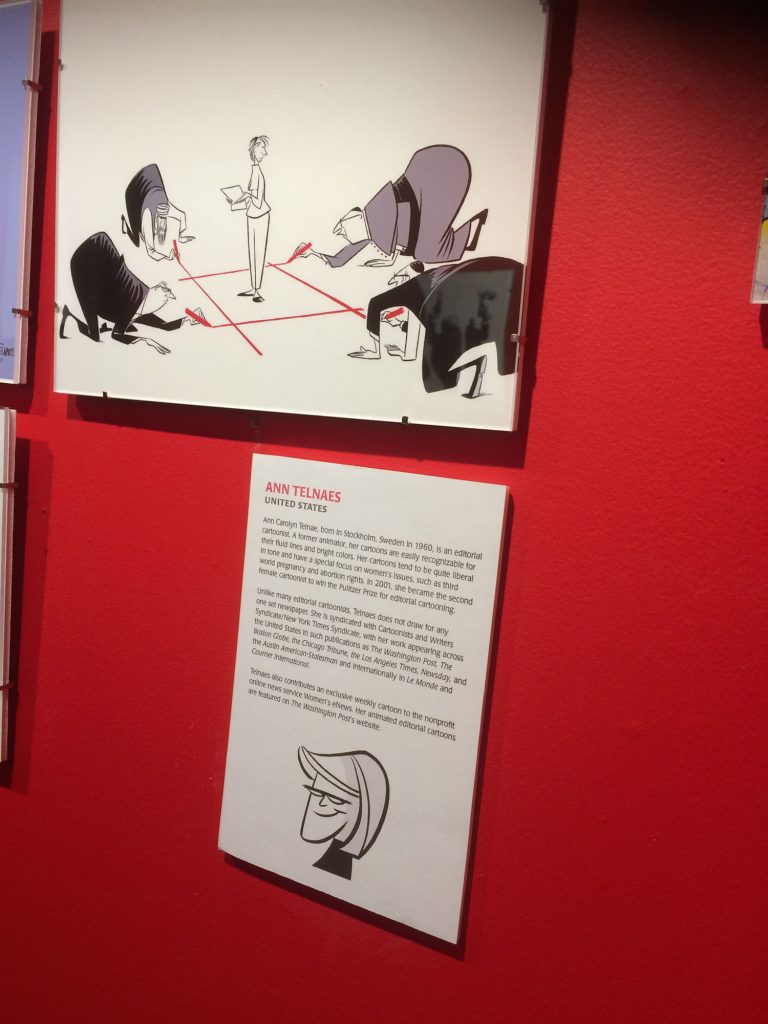 Speaking of international cartoonists, there is currently an effort by cartoonists the world over to aid Iranian refugee cartoonist Eaten Fish, who is being held in a detention center in Papua New Guinea on the orders of the Australian government.  He is hoping to resettle in Australia.  Look for drawings of fish on Twitter with the hashtag #EatenFish

Dogs Who Lie And Deny

Say you were cooling a loaf of banana bread on the stove and there were two dogs in the house.  And say you walked out of the kitchen for a minute or so.  When you return to the kitchen and half the loaf is gone, who claims responsibility?  No one.  Even when you put your nose really close to their snouts and try to smell banana on them. No one says a word.

I’m going to be one of three Gong Show judges for the second half of of Northampton’s  giant talent show, aptly called The Really Big Show.  It’s a great event!

Thanks for tuning in!!