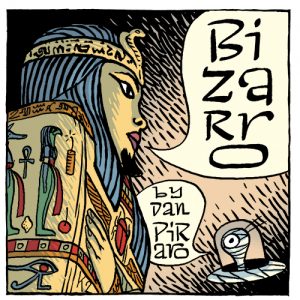 (To embiggenate these images to “a million, a million and a half people on the mall,” click the invisible unicorn that dances on your imaginary rainbow.) 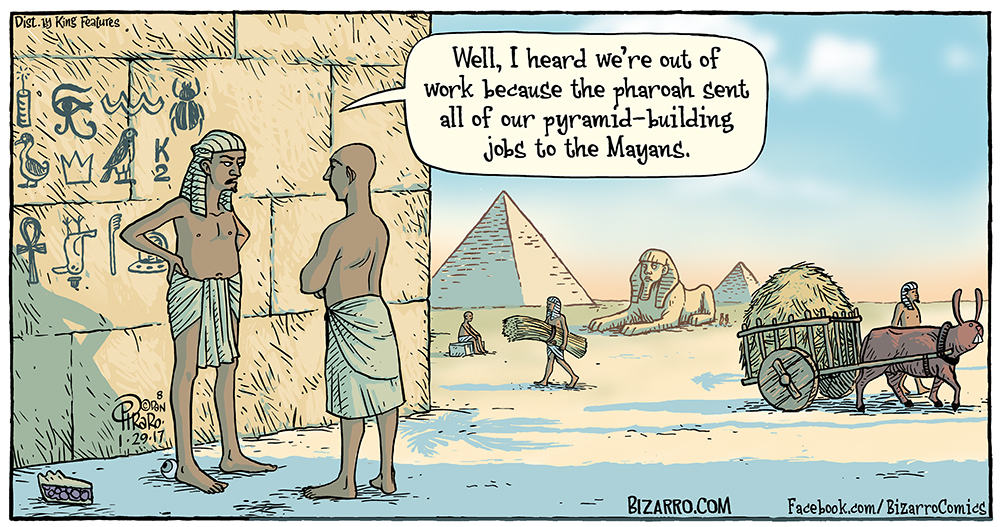 Bizarro is brought to you today by Alternative Facts.

It was another supremely disturbing week in American politics and one wonders how long the pace of insanity can remain this furious. If you were under a rock last week and didn’t witness the ongoing carnival of spoiled brat billionaires trading your rights, ideals, and environment for cash in their pockets, definitely stay there. Do not come out. Under a rock is the only safe place to be right now.

Today’s pyramid-builders cartoon is about one of the encyclopedia of lies that the Pussy Grabber in Chief (PGinC) told on his bizarre journey to losing the election by millions and embarrassing our nation globally with his hillbilly manners and racist, sexist gospel of the privileged white male, yet being awarded the most powerful office in the world. Like the insanity of modern-day gun ownership in the U.S., the damage the Electoral College could end up doing to our country is something the founding fathers did not anticipate. And on both fronts we’re paying an enormous price. Take a quick peek at this chart and tell me where the most danger comes from in modern America.

Will the Electoral College be abolished eventually? If the country survives its effects, maybe so. Will it be anytime soon? Not a chance. The Republicans are in power across the board and definitely would not be outside of rural, uneducated strongholds were it not for the Electoral College, the Republican gerrymandering efforts across the nation, and their so-called “voter fraud” laws, which are exceedingly poorly disguised voter suppression laws. I’m afraid we’re in this dumpster fire for a very long time, folks.

Perhaps some funny cartoons will take our minds off of it! Let’s try. 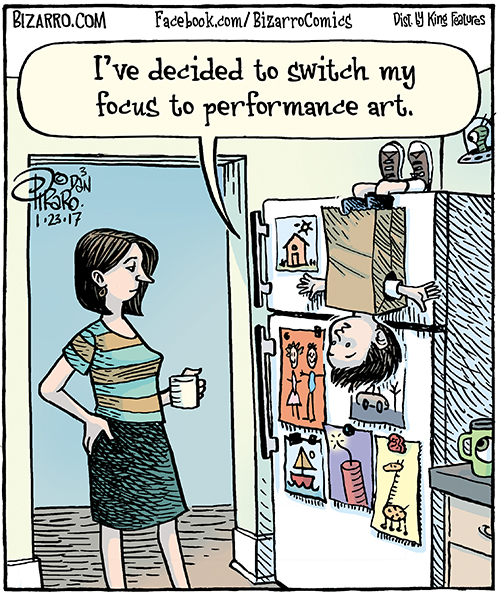 If you’ve been living under a rock and have not seen “performance” art, just stay there. I’m not talking about people who perform legitimate forms of art like music or theater or dance, I’m talking about the kind where someone has themselves duct-taped to a folding chair sitting in an inflatable kiddy pool in the lobby of an art museum for three days and calls it art. Yes, things like that happen in the same world which you and I are inhabiting at this very moment.

Sometimes people criticize me for being so critical of these kinds of “art forms”. They say that as a surrealist, I should definitely understand that there are no rules to what art can be. Sure, I get that. But apply that same anything-goes philosophy to any other form of expression and what have you got? Does it make sense to call an empty book a novel? Is banging on a concrete wall with a sack of damp laundry music? Would you call a person making comical frog noises a singer? Can throwing oneself to the ground in the middle of a busy sidewalk and rolling around frantically as though your shirt was on fire be called dance?

Yes, anyone can do whatever they like in a free society and call it whatever they want. And by the same philosophy, I can call it nonsense. (Take that, kid hanging upside down on your mom’s refrigerator!) 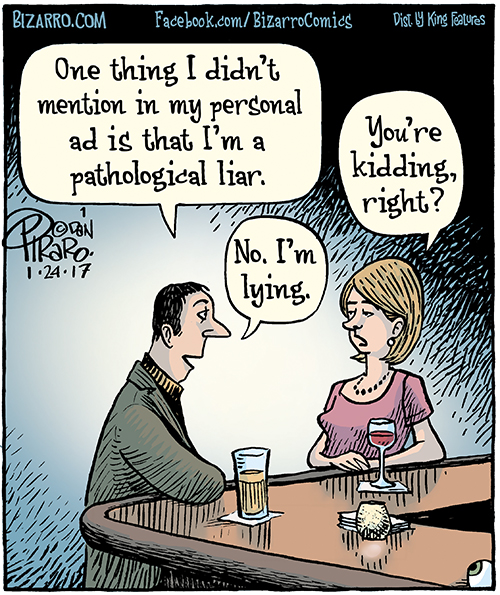 Lying has been big in the news lately because our PGinC uses it hourly to advance his whims. (As I see it, he has only three political tools: lying, public insults, and threats of revenge.)  As many in the media (the real media, not the Republican marketing firm disguised as media that calls itself Fox News Channel) have noted lately, we are in a “post fact” era, meaning that most people would literally rather believe something false that backs up their previously-held notions, than hear the truth. This is huge (spelled and pronounced correctly) and could literally destroy the country.

Here’s how: If a majority of America voters are foolish enough to believe blatant, obvious lies––e.g. Trump won the popular vote, Trump’s inauguration crowd was larger than Obama’s in ’09, Hillary Clinton started the so-called “birther” movement, the Clintons had people murdered, etc.––then we are knowingly turning the country over to the people most willing to lie blatantly and refuse to back down. We’re stuck with Trump and his kind indefinitely.

Shameless liars are not the kind of person you want to trust your children and grandchildren’s future to. 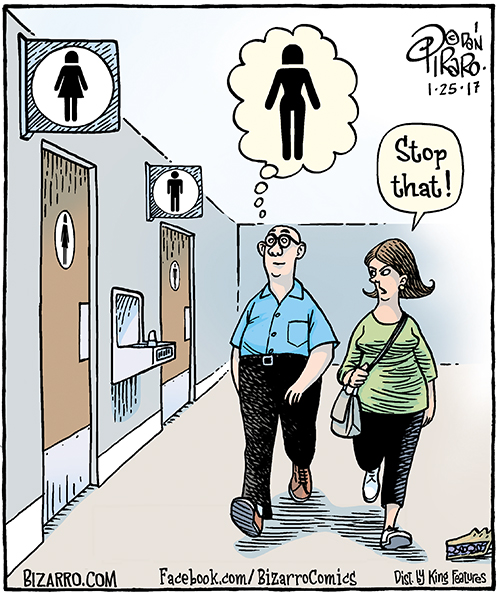 This cartoon demonstrates that not everyone’s imagination is imaginative. 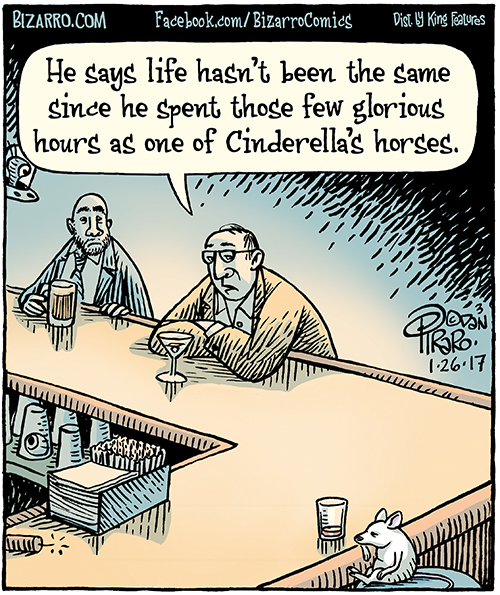 I drew this cartoon because I was this rat. We all have been in one way or another.

Three years ago I was the narrator and onscreen host of a prime-time TV show on a major network. I did interviews, I went to a red carpet, charity party event with a dozen-or-so very cool comedians from past and present SNL casts, I got picked up in a limo a few times, someone at 7/11 asked for my autograph. Then, three months later, the show got cancelled and it was all over like Cinderella’s ball. I didn’t go out of my way to become a guy on TV, it just sort of dropped into my lap from nowhere and that’s not likely to happen again. Because I enjoy performing, after the show was cancelled, I hoped it would lead to other kinds of jobs in showbiz but it didn’t.

Maybe you came very close to a dream job but didn’t get it. Maybe you found who you thought was the perfect person for you but they turned out to be anything but. Maybe you voted for a reasonable person to run your country but a complete assclown snuck in the back door and burned the White House down. In one way or another, we all know how that rat feels after the clock strikes twelve. 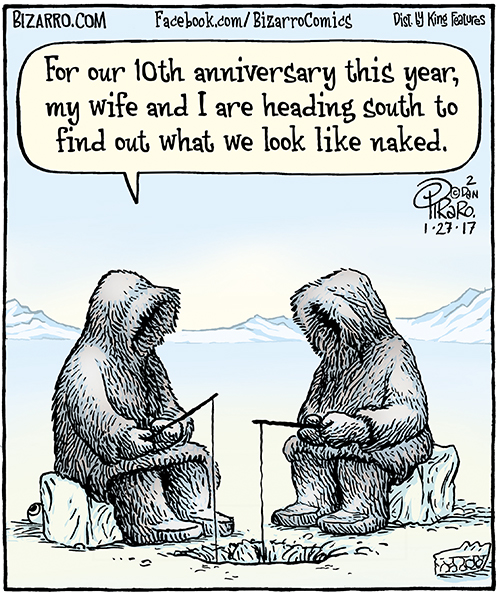 Since moving to Mexico a couple of months ago, people have been asking me how it will affect my cartoons. All I can say is that this cartoon was not inspired by Mexico, but by my hatred of being cold, which was also an inspiration for my moving here, so the topics are almost related but not in any substantive way. If you’ve not read this paragraph yet, don’t bother. Just move on to the next cartoon. 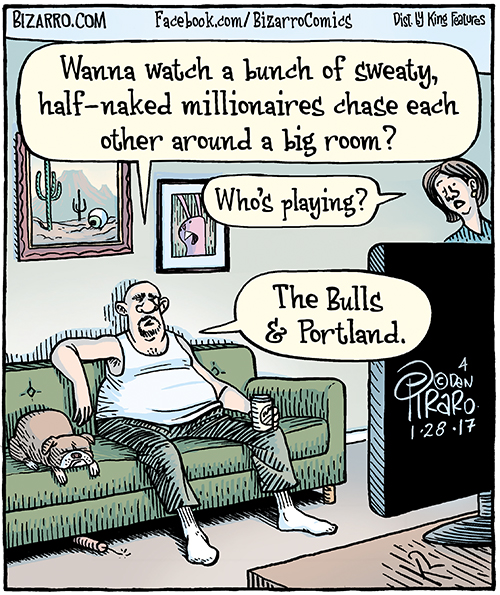 If I’m going to watch sweaty millionaires chase each other, I prefer they not be half-naked so I stick to ice hockey.

Speaking of hockey, I do not get to see much hockey on TV here in Mexico. What I do get to do, however, is attend Spanish class and today was my first. The first class was mostly about how to shout in English more loudly and slowly to non-English speakers. In the next class we’re supposed to learn actual words and phrases. Things like, “What’s wrong with you? Can’t you speak English?”

Maybe I should have read some of the reviews and comments about this particular Spanish school. I’ll keep you updated on my progress.

Thanks for reading this week, Jazz Pickles. I just did an interview with a comics site that you may enjoy and you can find it here.

I have a new book out that you can find here.

Until next time––be nice, be smart, and try not to get deported.