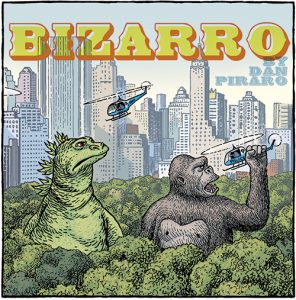 (Be an embiggenator by clicking any object in these images that has curved lines.) 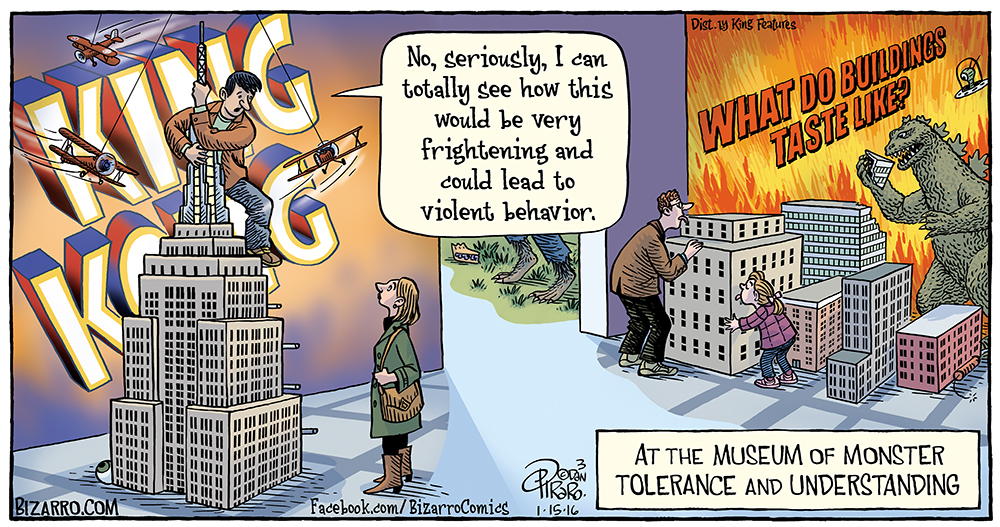 Bizarro is brought to you today by Good Point.

Political correctness can be tiresome, to be certain. But in the end, it is nothing more than people in a society asking each other to be kind to others and make this a more pleasant world to live in. And even though some people get carried away with it and erroneously think that everything is an offense, the basic concept is not a bad thing.

Some of those people will see this cartoon and think I”m making fun of tolerance. Personally, I find those kinds of people challenging to tolerate. 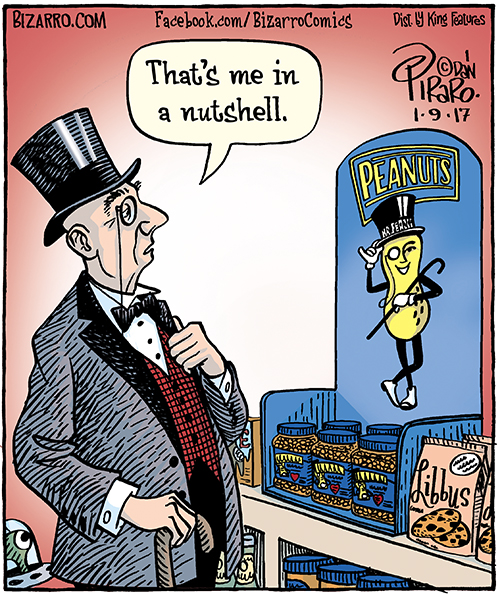 Back at the turn of the century (the one 117 years ago) guys dressed like the one pictured above used to actually walk around every day like it was normal. Because it was. For super rich guys, anyway. The rest of us were dressed in rags, as we still are today. 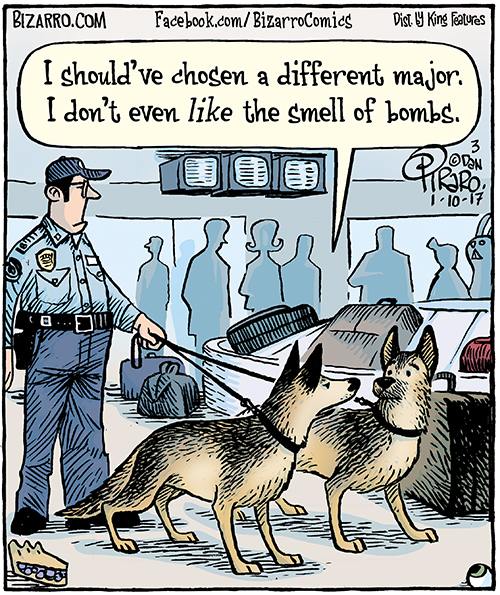 I’ve long been fascinated by the amazing smelling skills of dogs. Apparently, their sense of smell is so powerful that they can actually smell the chemicals we release when we’re happy, sad, angry, etc., and that’s a primary way they are telling how we feel, not just our outward behavior. They can also smell tumors and alert doctors to cancer before the person has symptoms. (I’m not sure how they tell people they have tumors before they have symptoms, but I’ve read that this is a real thing.) So smelling my marijuana even though I’ve packed it inside three Ziplocks and shoved it inside a bottle of shampoo and buried it at the bottom of my dirty laundry in my suitcase is no more difficult for them than it is for me to smell the cigarette smoke on someone who just came in from having a smoke outside, even though they chewed up a breath mint. Which is why I don’t fly with marijuana, even though most of the dogs you see at airports these days are after explosives and not pot.

In summary: I am amazed by dog’s noses and I won’t fly with marijuana until it is a completely legal object of god’s creation (as it should be) or until dogs decide as a species to stop doing what humans tell them to (which I hope they never do). 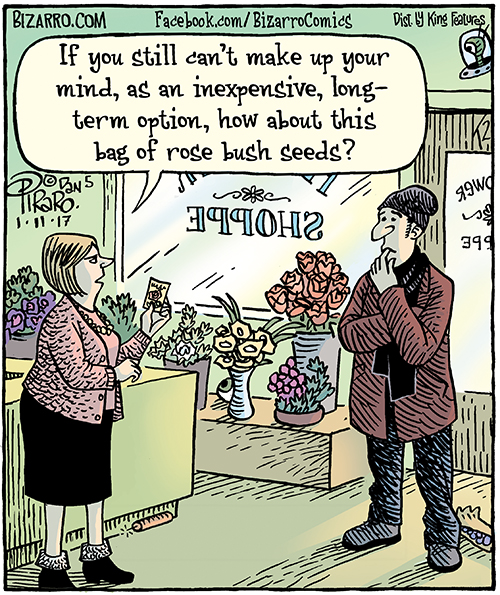 Buy your lover some cut flowers and they can enjoy them for a few days until they die. Buy your lover a packet of seeds, and they can spend lots of time preparing and nurturing them for days or weeks and then watch hundreds of very small things refuse to come up out of the dirt.  At least, that’s been my experience with seeds. If I was a dog, I could probably smell the seeds dying and could forego watering them much sooner. 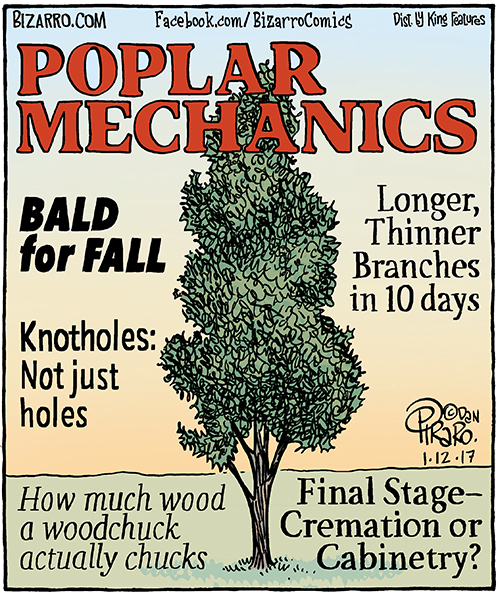 I love phony magazine covers and have done a few over the years.  Here’s one I did last year that I still like. 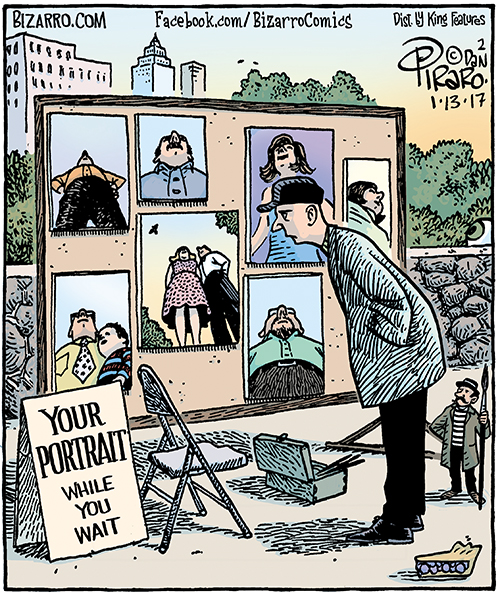 I’m curious if there are any readers who had trouble with this one. The punch line is the tiny artist at right, of course. I got this idea by imagining what it would be like to be a small lapdog, like a chihuahua, in a world full of creatures ten or twenty times your size, like humans. I can’t imagine how terrifying it would be to walk down the crowded streets of Manhattan if everyone else rushing by was the size of a 15-story building. 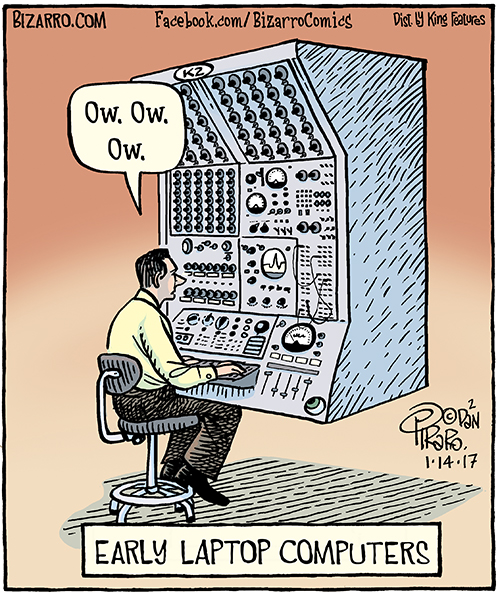 According to a comment left by a reader of mine, the hilarious and enviably popular columnist, Dave Barry, came across this idea some time ago. Here’s the quote from a Dave Barry article from I-don’t-know-when:

When you live in a world populated with innumerable comedy writers of all kinds scouring the universe for humor every second of every day, a number of them are going to come across the same ideas independently. Such is life.

That concludes this week’s cartoon roundup, my precious Jazz Pickles. If you’ve been reading Bizarro for free and would like to enjoy the satisfaction one feels from supporting the arts, I would like to point you to the Tip Jar in the margin at right. Or click this.  The first option is for monthly contributions (SO appreciated!) and the next option is for a one-time donation. (ALSO appreciated!) Sorry if the graphics on that page look weird. We’ve been having trouble with it.

If you like surreal, creative artwork, I would like to point you to my new coloring book for all ages. Even if you don’t want to color it, you’ll enjoy getting lost in the 31 different, amazing worlds I have illustrated for this book. And it’s only $6!! That’s less than twenty cents per world, people. (What the hell was I thinking putting this much work into a book I cannot make money off of without it selling hundreds of thousands of copies? I don’t know.) Here’s a page from that book that you may not have seen.

See you next weekend, Jazz Pickles. Until then, be happy, be well, be nice.