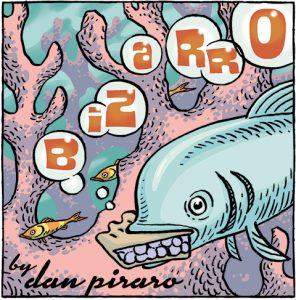 Bizarro is brought to you today by Holiday Magic.

Today’s cartoon would have been more appropriate around Columbus Day, but given that the United States accidentally elected a reality show host as president and given his attitudes toward non-white people, it seems relevant now, too. I’ve long despised our tradition of honoring Christopher Columbus with a holiday; he was by all accurate accounts a terrible person who neither proved the world was round nor was the first European to discover the Americas (as I was erroneously taught in elementary school in the 1960s), and he murdered more than 100,000 indigenous people for commercial gain.

Rewarding terrible people is an annoying habit of humans, the most recent and notable example of which is awarding Donald Trump the highest office our country has to offer. Rewarding someone who has behaved as badly as he has throughout his life and during the presidential campaign, is a horrible example to children and low-intellect adults who now feel that bullying and racism have been made more acceptable. 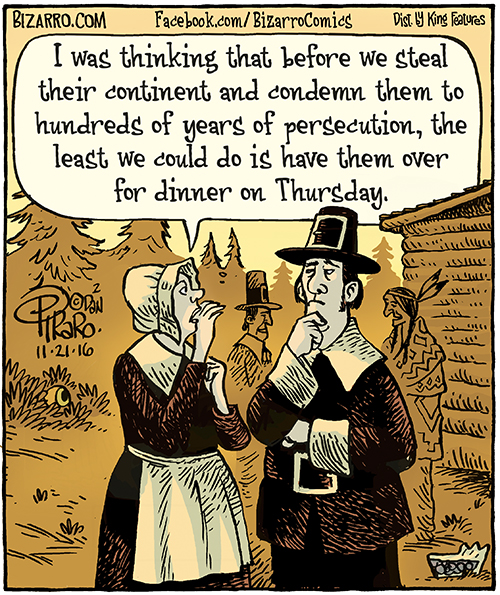 I’m no fan of the original pilgrims that “settled” this country, either, but here are a few cartoons about them. History is messy, whaddyagonnado? 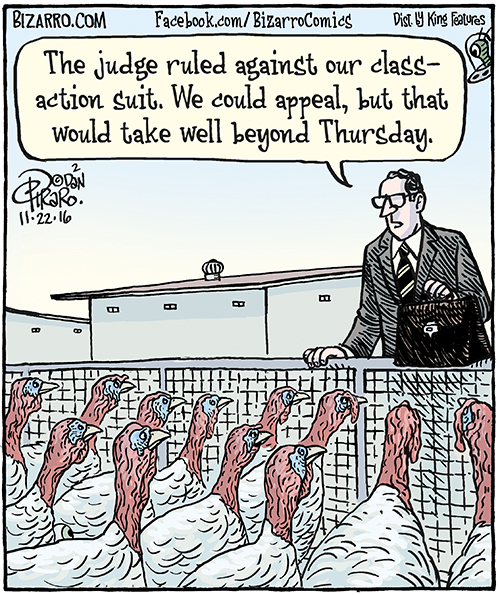 As bad as being slaughtered for food must be, getting dragged through court for extended periods of time is no picnic, either. Based on my own experience (court, not slaughter) these guys might actually be better off.

If you’ve ever been around a full-grown turkey you know that they can be fairly formidable adversaries. They’re big, weird, and territorial. I’ve never been injured by one but I’ve been chased off by them. One the size of the example in this cartoon would be nearly as scary as a bear. 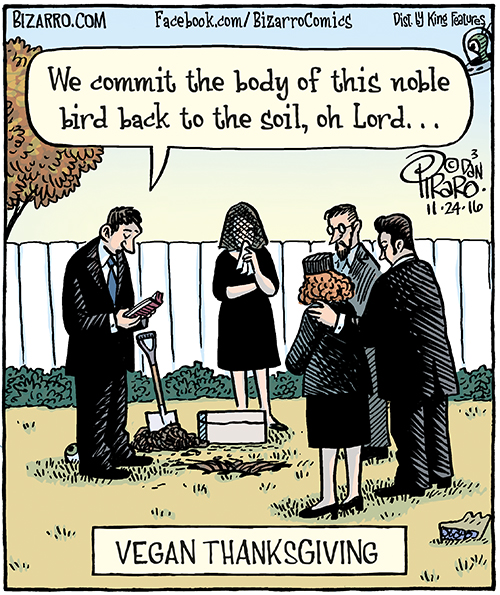 I don’t know as many now, but for over a decade I hung out with a lot of animal rights folks in NYC and LA, all of whom deeply objected to the holiday tradition of killing tens of millions of turkeys. It’s more conspicuous on Thanksgiving and Christmas because it is so many of the same species, but the simple truth is that every other day of the year just as many other kinds of animals die because most people eat animals every day. Animal rights folks don’t like that, either, of course. All I’m saying is that holidays are no different than any other day for animals regarded by humans as food.

I think this belt cartoon is my favorite Thanksgiving-related cartoon from this week. I don’t know if pilgrims actually wore belts on their hats but they’re always depicted that way now. If they did, I can’t imagine a reason for it other than the one shown above.

Considering how popular selfies are with virtually everyone these days, I’ve occasionally wondered what it is about selfie sticks that most people find stupid. I think they’re stupid, too, but I’m not sure what the difference is between holding up your arm for a selfie or holding up a stick. About the only thing I can come up with is that it is a little more conspicuous.

I just remembered a funny story that is photo related. I was at the DMV recently getting a new drivers license. I was standing in line to have my photo taken, waiting for a young woman of about 18 to have her photo snapped ahead of me. When the guy took her pic, she approached the counter behind which he stood and asked if she could see it. The man turned the computer screen around so she could see her photo. She asked, “Can you lighten it a little?” He tapped his keyboard a couple of times and said, “That’s as light as I can make it.” She then said, “Do you have any filters or anything?” He stared at her with the blank expression of a statue in the park common to people in such jobs and said, “No.” He then turned the computer screen back around and said, “Next.” I thought that was funny.

I’m moving to Mexico in a few days and don’t know what my computer and wifi situation will be by next weekend so if I don’t post, that will be why. Hope you Jazz Pickles have a dandy week.

Please consider some of these dandy gift ideas this holiday season:

There’s still time to order Bizarro holiday cards and get them in the mail to your fave peeps!

Here’s my new coloring book full of outrageous surreal art that is fascinating and inspiring to grown-ups and kids alike! Also available at your local bookstore or any online book stores. ($5.99 each. No kidding!)

Prints of Bizarro cartoons make great gifts, too! Get them from Bizarro.com by using the calendar function below the cartoon at the top of the home page to pull up the image you want, then clicking the “Buy Prints” link below. ($30 to $100)