(To more fully enjoy these cartoons, I recommend clicking them for embiggenation.) 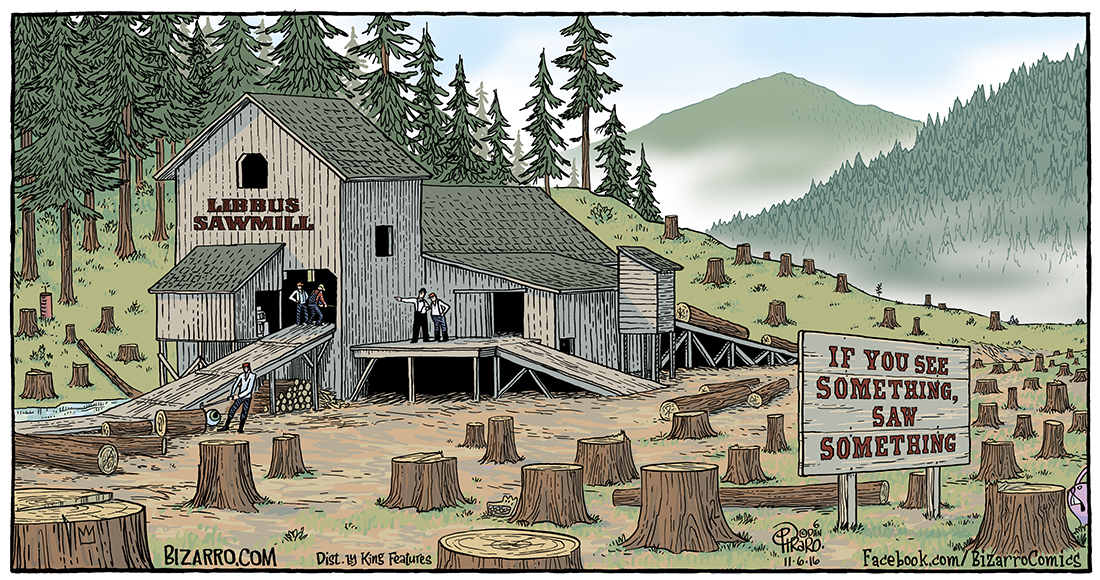 Bizarro is brought to you today by Scary Things.

This sawmill cartoon is a bit on the fringe so don’t be too hard on yourself if it made you scratch your head.

Sometime after 9/11 (the infamously tragic one, not the one two months ago) the New York City Metropolitan Transit Agency (the folks that run the buses and subways) started a public safety campaign urging citizens to report suspicious behavior with the slogan, “If you see something, say something”. The campaign was later adopted by the U.S. Department of Homeland Security and used nationally. A longtime Bizarro Jazz Pickle suggested turning the phrase to what is displayed on the sign above. It made me chuckle, so I turned it into this cartoon. As a tip of the hat to the contributor, I named the sawmill after him.

This scene was fun to draw but also very time consuming so I went a long way to deliver a soft pun. Sometimes that works, though. I hope you think it worked this time.

Hard as it is to believe now, last Monday was Halloween. I opted for a cartoon that is much more frightening than the typical Halloween cartoon by suggesting a pile of laundry vs. an actual monster. If you hate doing laundry as much as I do, this will terrify you. 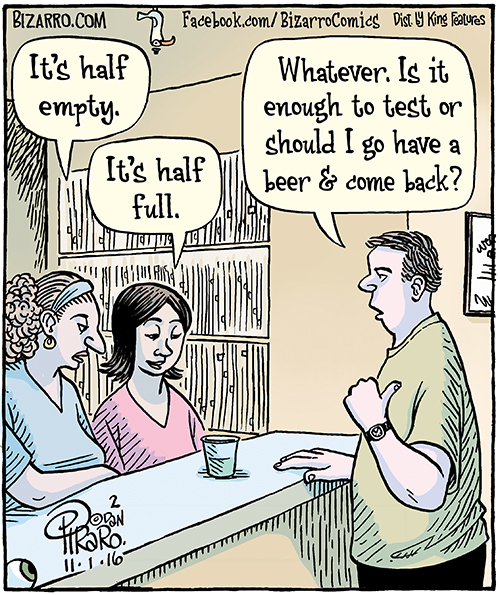 Here is a medical/biological take on the old optimist/pessimist example of how one sees a partially filled container. Nothing important about it, just a cheap chuckle. Here’s a cartoon I did on the same trope almost exactly one year ago.  If I’d known back then what today would look like in reference to that cartoon, I’d have been horrified. I hope the same relationship doesn’t hold true for today and a year from now.

More than one person asked me what this shipping office cartoon means and I knew it would stump some readers. If you understood it, give yourself three extra gold stars this week.

In the offices of companies that deal internationally, there are sometimes a row of clocks on the wall that show the current time in cities in various time zones: New York, London, Moscow, Tokyo, etc.  Since this company only ships north and south, all of their cities are in the same time zone, and thus the clocks show the same time. Which is pointless. And also amusing. To me, anyway.

I’m a person who takes as few prescription drugs as I can. I’m currently taking none whatsoever and I intend to keep it that way for as long as possible. Even though some pharmaceuticals provide a great service to people in many cases, I don’t like or trust the industry that markets them so I have to be extremely uncomfortable or close to death before I dabble in them. I have been fortunate to be in relatively good health for my age and I understand that not everyone has that luxury. If you’re in that position, I sympathize greatly, of course, and this cartoon is not about you. The guy in this cartoon just wanted to pick up a few extra bucks so he volunteered for a drug trial and his head shrunk up like a raisin. If your head has shrunk like a raisin, my apologies for making light of your condition in this cartoon. I didn’t know that was even a thing. 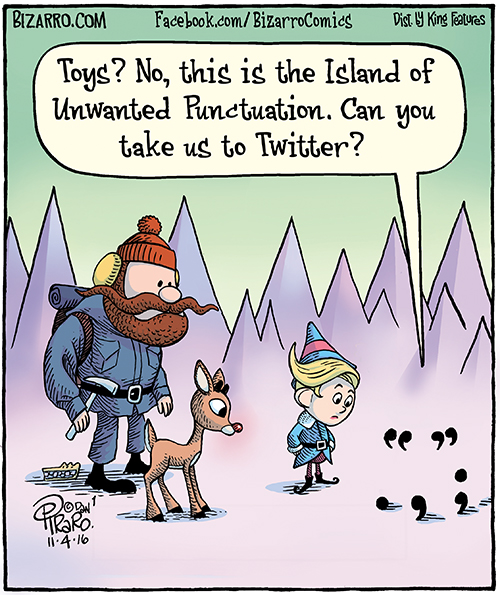 These kids today and their haphazard treatment of grammar and punctuation in their various social media platforms disturbs me greatly. Is it because I’m old and cranky and have no tolerance for change, or is it because I suffered mightily under the swashbuckling yardsticks of various nuns in Catholic school who convinced me that writing correctly and intelligently was an important key to success in life, only to have an entire generation declare it acceptable to produce indecipherable messages like drunken toddlers tapping a keyboard at random? Probably a little of both. 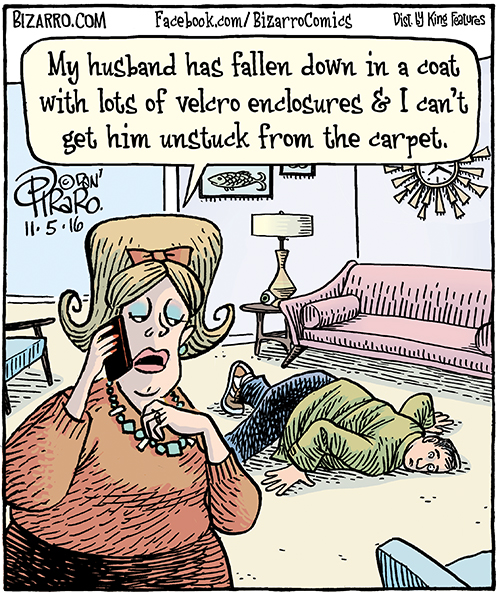 Speaking of grammatical errors, I made one in this cartoon by using the word “enclosures” instead of the proper “closures”. An enclosure is a place that confines things, like a box or a courtyard. A closure is something that temporarily closes something, like velcro tabs. I’m mad at myself for not catching that but even more upset with my editor, because as I see it, she failed at the most important aspect of her job: keeping me from looking stupid. (I’m directing these comments to people over a certain age here, those who recognize that there are rules about the order, frequency, and arrangement of letters and symbols within a given language. You youngsters just busy yourself online for a minute while we discuss this.)

Some cool things for Jazz Pickles: Have a look at the Bizarro cartoons greeting cards that these guys offer. They ship them out super fast so you’ve got plenty of time to get them in the mail.

LOOKING FOR AWESOME GIFTS? WHAT ABOUT…

My new coloring book, full of inspired and inspiring art for all ages.  (Only $6)

THANKS FOR READING, JAZZ PICKLES. HAVE A DANDY WEEK!